The very name of this cell death type, apoptosis, which means “leaves falling away” in Ancient Greek, suggests that this is as natural a feature of a multicellular organism as seasonal changing of leaves for trees. Apoptosis is triggered when a cell is badly damaged, which seriously impairs its functions: the well-coordinated work of specialized systems that irreversibly damage the major cell structures causes such a cell to commit “suicide.” All cells of multicellular beings have the apoptosis machinery, similarly to Japanese samurai, who always carry their swords with them. However, this natural process has a reverse side as well: once this fine mechanism is disturbed, the consequences for the organism may be most catastrophic. In particular, cancer cells acquire immortality by blocking the system of apoptosis. That is why research into the mechanisms underlying cell self-liquidation is among the most important fields in current biomedical science: gaining an insight into the secrets of apoptosis will assist in designing new drugs for the most severe and hard-to-cure diseases of our time

Millions of cells die in our body every day and every hour. Keratinized cells of the surface epithelium peel off; mucosal cells that line the gastrointestinal tract rapidly wear out and die; leukocytes, the white blood cells, are killed in action fighting with pathogens; and so on… How does our body get rid of specialized cells that become unable to perform their functions after having accumulated internal injuries? One of the most paradoxical and extraordinary mechanisms that controls the viability of a multicellular organism is apoptosis, or self-destruction of cells

The very name of this cell death type, apoptosis, which means “leaves falling away” in Ancient Greek, suggests that this is as natural a feature of a multicellular organism as seasonal changing of leaves for trees. Apoptosis is triggered when a cell is badly damaged, which seriously impairs its functions: the well-coordinated work of specialized systems that irreversibly damage the major cell structures causes such a cell to commit “suicide.”

A regular genetically programmed death of individual cells is necessary for the normal performance of the body as a whole. All cells of multicellular beings have the apoptosis machinery, similarly to Japanese samurai, who always carry their swords with them. However, this natural process has a reverse side as well: once this fine mechanism is disturbed, the consequences for the organism may be most catastrophic.

Flaws in the triggering of apoptosis bring about several severe diseases, including various autoimmune diseases and cancer. In particular, cancer cells acquire immortality by blocking the system of apoptosis. That is why research into the mechanisms underlying cell self-liquidation is among the most important fields in current biomedical science: gaining an insight into the secrets of apoptosis will assist in designing new drugs for the most severe and hard-to-cure diseases of our time.

So, the cell has performed its functions, “got old,” and is ready for self-destruction for the good of the organism as a whole. Who is to commit this “contract” suicide?

This “crime novel” about apoptosis seems to have its own concealed killers. Special enzymes, caspases, which are present in every cell, play this part (Salvesen, 2002; Nicholson, 1999; Lavrik et al., 2005). Usually, caspases reside in the cytoplasm as inactive precursors (procaspases). The procaspases display no activity, peacefully coexisting in the cell together with other proteins; however, the signal for self-liquidation turns them into real killer proteins.

The “image changing” of the harmless procaspases goes as follows: the protein is cleaved into three fragments, one of which (prodomain) is detached, and the remaining two bind with the two analogous fragments of another procaspase. This structural rearrangement yields an active caspase heterotetramer with the catalytic enzyme center formed of amino acids (Salvesen, 2002).

The resulting active caspases finally come out and start to cleave all the proteins that carry the amino acid asparagine (provided that three other amino acids are located near this amino acid residue in a certain manner). The “subversive activities” impair hundreds of proteins in the cell. Among the best known caspase targets are proteins of the cytoskeleton (cell scaffold); the proteins involved in DNA repair (restoration); structural proteins of the cell membrane; and several other vitally important protein types. All this interferes with the cell’s vital processes.

On the other hand, caspases activate a number of proteins that directly implement self-liquidation. One of them is the protein that cuts DNA into large fragments; this irreversibly destroys the integrity of DNA, which is a characteristic feature of apoptosis.

The intriguing question is how the cell comes to know that it is time for it to self-liquidate. Who and how gives directions to killer caspases?

There are two major pathways for transducing apoptotic signals in the form of cell regulators, such as hormones, antigenes, monoclonal antibodies, and some other molecules. One is the mitochondrial, or intrinsic pathway, while the other involves special transmembrane proteins, the so-called death receptors (DR). In both pathways, apoptosis is triggered after some special initiator complexes of apoptosis are formed. Then, the so-called initiator caspases are activated, which, in turn, activate the effector (destroying cell structures) caspases, mentioned above (Nicholson, 1999).

The mitochondrial pathway is initiated as a result of an intensive impact of several damaging factors on the cell. However, the details of how these damages are transformed into the mitochondrial apoptotic signal are still vague. Nonetheless, it is reliably known that the first step is release of cytochrome C—a small protein containing a complex with iron, which is a component of the mitochondrial respiratory chain (Green et al., 2004)—out of mitochondria (the energy factories of the cell). 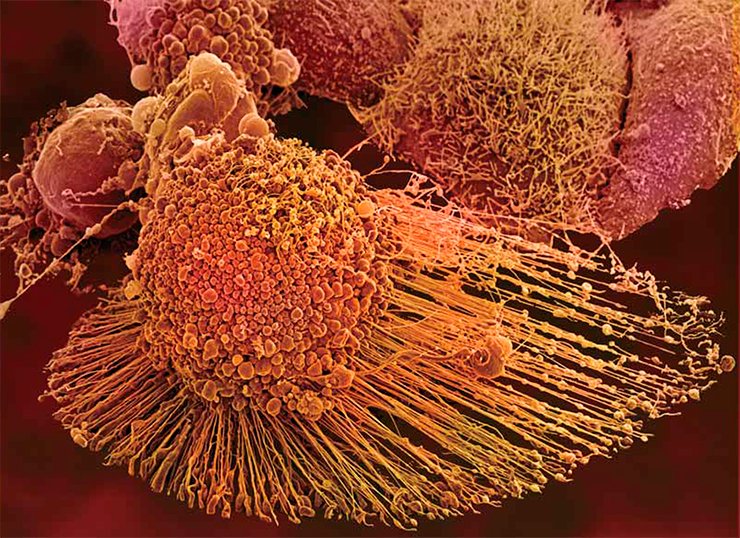 The release of cytochrome C initiates the formation of a large protein complex—apoptosome—in the cell cytoplasm; in addition to this mitochondrial protein, the complex contains procaspase-9 and protein APAF-1. It is apoptosome that is the actual “crime boss” that gives a signal to killer caspases.

Here we encounter a very interesting phenomenon, namely self-activation of procaspases. It may happen only when two molecules of this protein, oriented in a certain manner relative to one another, form a dimer. Apoptosome creates for procaspase-9 unique spatial conditions necessary for enzyme dimerization and catalytic activation. The resulting active caspase-9 cleaves effector caspases (caspase-3 and caspase-7); subsequent events follow the standard scheme of apoptosis (Green et al., 2004). 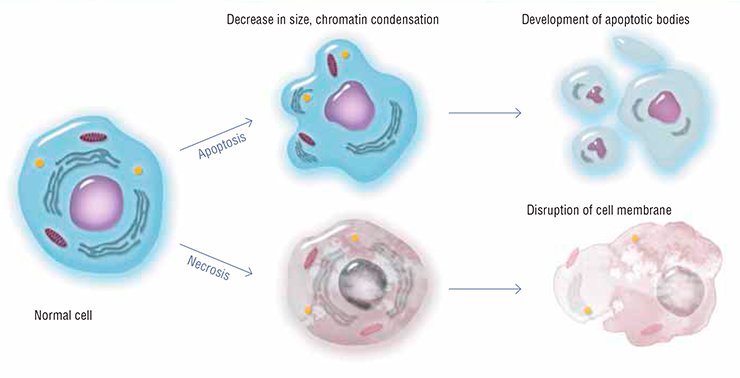 In the case of the receptor-dependent signaling pathway, apoptosis is initiated by another protein complex, which is formed directly on the death receptor (Krammer et al., 2007; Lavrik et al., 2005).

Currently, the receptor family comprises six members, including the receptor of a widely known protein, the tumor necrosis factor. All death receptors carry the same fragment of 80 amino acids, the so-called death domain, residing in the protein “tail,” which extends into the cell cytoplasm. The adapter protein FADD, also located in the cytoplasm, carries the same amino acid fragment. Death domains can interact with one another, forming a stable bond; as for FADD, it is able to bind procaspase.

The whole chain of events that eventually generates the apoptotic complex is triggered by the death ligand, the agonist protein capable of specific binding with the death receptor. Synthesis (and, correspondingly, an increase in concentration) of such molecules in the cell is stimulated by a cascade of events in response to the cell damage. As a result, the death-inducing signaling complex (DISC) is formed on the receptor, with FADD as a mediator. Similarly to apoptosome, this complex allows for self-activation of procaspase-8, which, in turn, activates effector caspases (caspase-3 and caspase-7) and initiates cell death (Lavrik et al., 2005; Krammer et al., 2007). As a matter of fact, these are all the differences between the triggering of the two signaling pathways of apoptosis.

To live or not to live?

Note that any cell of the body is constantly exposed to numerous damaging impacts, such as various types of radiation, manifold chemical agents, and deficiency in nutrients. Luckily for us, robust initiation of cell death requires a comparatively strong impact. Specific mechanisms playing the part of “traffic cops” safeguard apoptotic pathways, and the main players there are special proteins, XIAPs and FLIP (Lavrik et al., 2005).

The XIAP proteins inhibit caspase-9, which is activated with development of the mitochondrial pathway. Binding to the caspase active center, they prevent the “killer” from doing its job. However, the XIAP proteins help the cell to disable rather few active caspases. If the concentration of active caspases exceeds a certain threshold, the effect of XIAPs becomes insufficient, which makes the progress of apoptosis unstoppable. 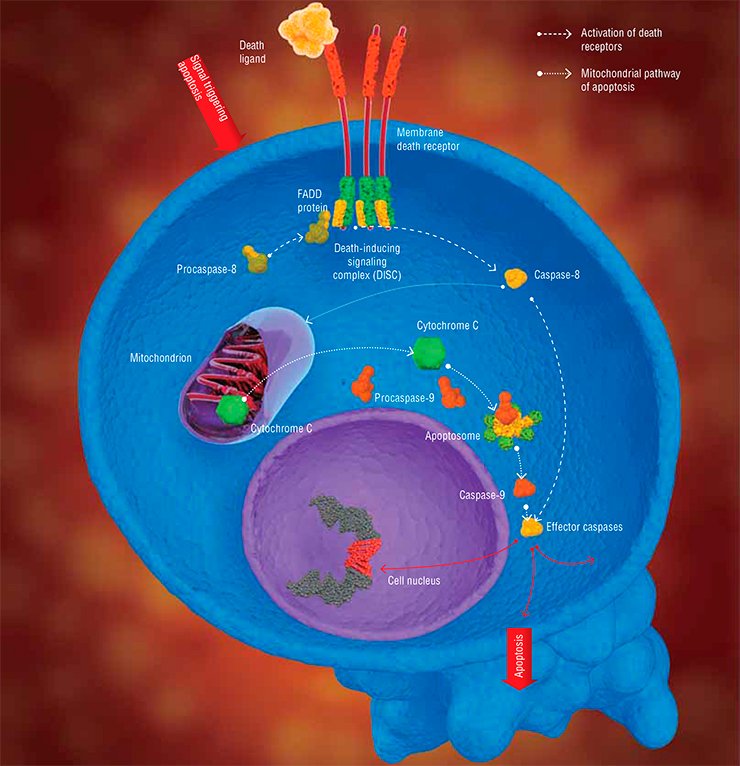 In the receptor-dependent apoptosis signaling pathway, the procaspase-8 activation is inhibited by the above mentioned FLIP, which is close in its structure to this procaspase. FLIP molecules also can bind to the apoptotic DISC, competing with procaspases for the binding sites: in the event of an elevated concentration in the cytoplasm, they block all the potential sites for such binding (Krammer et al., 2007). Thus, procaspase-8 cannot be activated, and apoptosis is not triggered.

Disturbances in the expression level of both the pro- and antiapoptotic proteins may seriously distort the normal cell lifestyle. In particular, an elevated expression level of XIAPs and FLIP is observed in many cancer cells. Having decided on their own immortality, they eventually lead all the multicellular “community” of the body to death.

Thus, the story of apoptosis, unlike Hollywood crime fiction, has no front-line player: the timely removal of damaged cells and, in the long run, viability of the organism depend on the concerted chain of events which involves manifold protein molecules.

Quantitative characteristics, such as concentrations of molecular players, are of paramount importance here. Currently, systems biology, one of the advanced fields in modern science, deals with the issue of how the concentrations of various molecules in the cell influence the course of apoptosis (Bentele et al., 2004). The main guideline of systems biology is that the behavior of any complex processes is understandable only if taken into account the maximally large number of cell parameters. For this purpose, a computer model, based on experimental data, is constructed; it considers the impacts of a multitude of factors. The predictions about the major processes in the cell thus obtained may be used to overcome the hindrances on the way of mankind towards a long and healthy life.