Infrared Imager: It Is Better to See Once

Human eyes can capture electromagnetic radiation only in a narrow range of wavelengths referring to visible light. However, the spectrum of photons emitted by various objects is much wider. It is possible to see many useful and interesting details by considering living and dead objects in infrared (IR) light. Such IR images can be obtained by using special devices, i. e., IR imagers, which can clearly present the changes in the temperature of various bodies, accurately measure their temperature, and even be used for diagnosing various diseases at the early stages of development

It is known that the human eye can capture electromagnetic radiation only in a narrow range of wavelengths referring to visible light. However, the spectrum of photons emitted by various objects is much wider. It is possible to see many useful and interesting details by considering living and dead objects in infrared (IR) light. Such IR images can be obtained by using special devices, i.e., IR imagers, which can clearly present the changes in the temperature of various bodies, accurately measure their temperature, and even be used for diagnosing various diseases at the early stages of development

Surprisingly, the first sensors responding to IR radiation were fabricated back in 1830. These sensors were based on thermocouples, which transformed heat to electric voltage. Half a century later, thermoresistive materials were discovered. The resistance of these materials is temperature-dependent, and they were used to develop radiation detectors (bolometers).

In 1920, there appeared photon radiation detectors (photoresistances and photodiodes) on the basis of semiconductor materials, where incident radiat¬ion quanta were directly transformed to the electrical signal. Such detectors ensured a higher sensitivity and performance. In 1944, photodetectors on the basis of lead sulphide were developed; the sensitivity of these photodetectors was focused in the spectral range fr om 1.5 to 3 µm.

These semiconductor photon receivers are used in advanced IR imagers, which are widely used for the visualization of versatile objects in the IR range.

In the first devices, the IR image was obtained by one detector by scanning the examined object with rotating prisms in the vertical and horizontal direct¬ions. More recent devices are based on multielement radiation detectors (arrays and matrices).

The development of IR imagers opened up new prospects in studying thermal processes. These devices ensure visualization of the temperature distribution and provide clear and, importantly, precise information on the degree of heating of the various areas of the object being examined. Seeing an integral pattern of changes that occur in the object allows researchers to better and faster understand the physical meaning of the phenomenon. 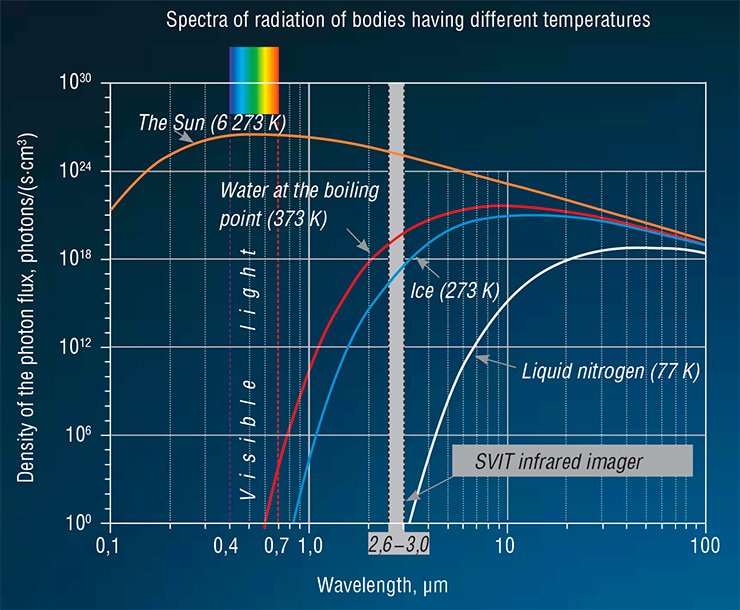 As an illustration, let us consider the dynamics of the falling of a heated (up to 38 °С) water drop onto the water surface at room temperature. It is difficult to image any other method (except for IR imaging) that would provide such a detailed image of this rather complicated and fast process, which lasts less than 0.2 s.

Thus, a warm spherical drop surrounded by a colder thin water shell separates from the end of the dropper. As the drop falls down, the drop surface is cooled. Approximately in 0.1 s, the drop hits cold water; the cold shell of the drop is destroyed, but the interior of the drop remains heated. Further, a water plume is formed above some part of the drop that has fallen into water; a small droplet separates from the plume, moves upward, and also cools down. At a certain time instant, this “daughter” drop hovers, and its surface is heated owing to water thermal conductivity because the droplet remains warm inside. Falling down, the droplet cools down, but the IR imager “sees” the heated interior of the droplet even when the latter falls onto the water surface. Investigation of the behavior of a heated drop is a good model problem, which is extremely useful for studying thermophysics and hydrodynamics of jet flows and emulsion formation. 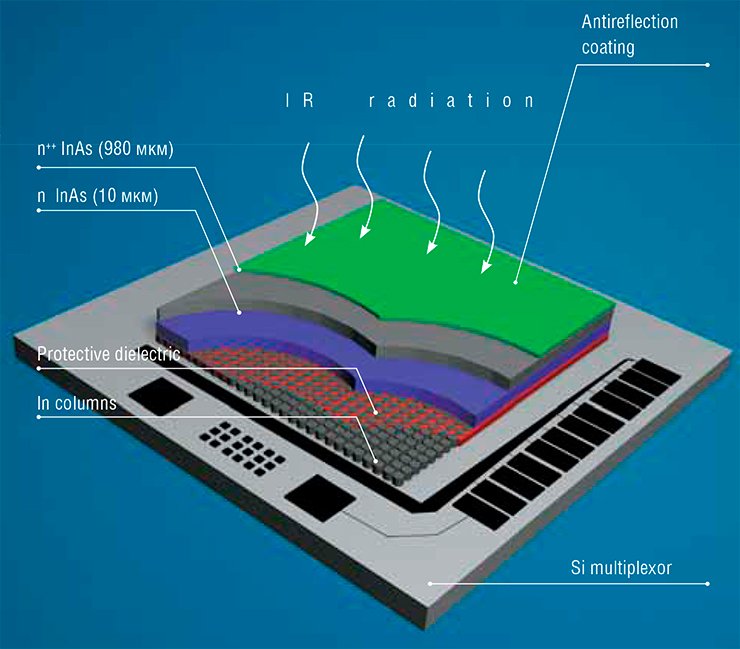 Another interesting effect can be observed when a water drop at room temperature is absorbed by a dry fabric. At the outset, only the uniformly heated smooth surface of the fabric is seen. Later on, a temperature halo (a red ring) appears around the drop; the temperature in this ring is 6 °С higher than the temperature at the middle of the drop. The halo moves over the fabric together with the front of absorbed water and exists only for a short time.

The observed heating is related to the release of absorption heat in fabric capillaries. The greater the absorption capability of the fabric, the more pronounced this effect: for instance, it is weakly expressed or even absent in synthetic fabrics. This phenomenon has applications in the studies of various absorbents, such as zeolites, or in development of fabrics for sport and medicine.

A clear example of IR imager applications is visualization of the so-called Benard cells, which are dissipative self--organizing structures formed in nonuniformly heated fluids during the origination of turbulent flows. The device provides an almost instantaneous pattern of the temperature distribution and allows one to detect the shape of convective cells being formed and to estimate their scale. 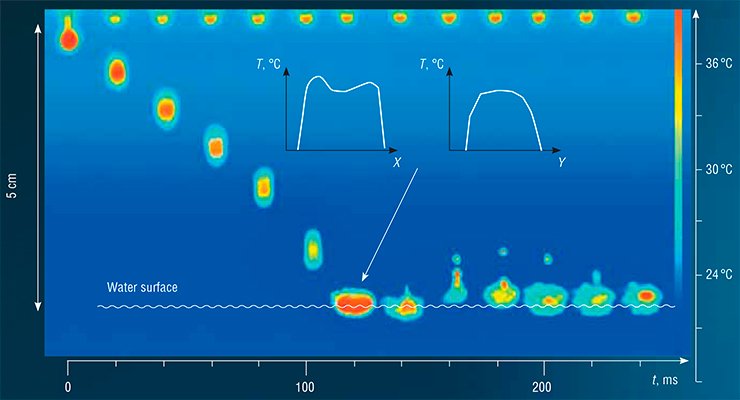 The IR imager can be effectively used in searching for the defects of printed boards, based on the overheating of electron components. By adding a special IR microscopic objective to the IR imager, it is possible to fabricate an IR scanning microscope of high spatial resolution. Such a device can be used, for instance, for studying radiation nonuniformity in IR light-emitting diodes.

“Thermal portrait” of a disease

What is the first thing you do if you suddenly feel sick? Take your temperature, of course! The thermographic diagnostics is based on the fact that temperature is one of the main features that characterize the state of the human health. The temperature palette of the human body reveals its ability to adapt to changes in the ambient medium and stresses and reflects the current physiological state of the body. 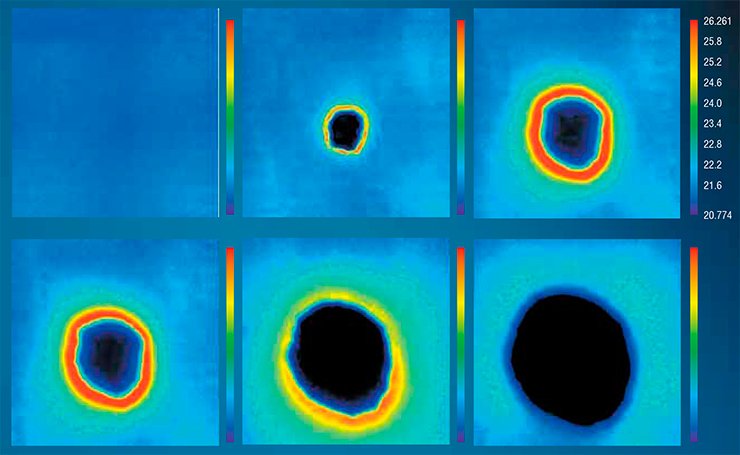 The temperature on the human body surface changes because of the activity of the autonomic nervous system, which controls the blood content in the subcutaneous vascular tree in reflexogenic zones corresponding to this or that viscus. Observing these zones, we detect not the structural features of viscera, as it is done by ultrasonic, X-ray, and other methods of active beam diagnostics but functional changes, which bear information about the normal and pathological processes in the organism.

Based on this approach, the early diagnostics of various diseases - from oncology to dentistry - was developed. IR imaging diagnostics is eversafe. Actually, it does not differ from usual video recording, but it can be used to monitor the state of the human body and to estimate the efficiency of medical treatment. The thermogram yields the “thermal portrait” of the disease almost instantaneously. Based on this information, an experienced physician can easily diagnose and estimate the stage of the disease development. 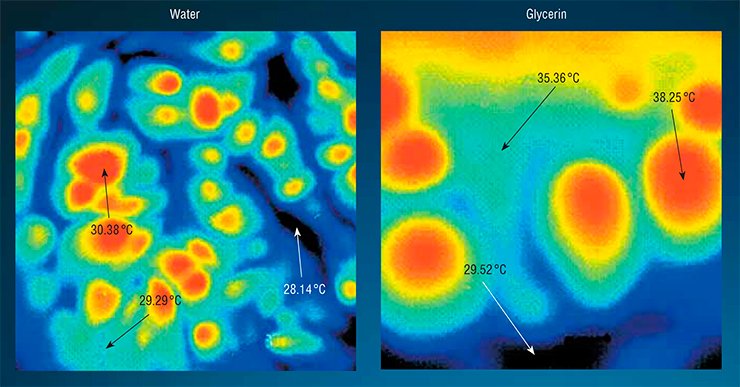 The matrix IR imager called SVIT, which allows real-time recording of the IR images of various objects with the ultimate temperature resolution of 7 mK, was developed at the Laboratory of Microelectronics of the Rzhanov Institute of Semiconductor Physics SB RAS. This unique tool is designed for the measurements of temperature fields and visual analysis of static and time-dependent patterns of the thermal state of various objects to be used in the area of medical and scientific thermography. 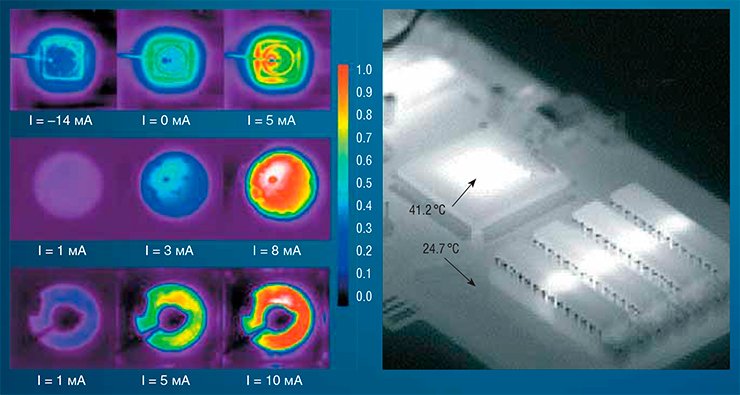 The main advantages of SVIT over its foreign analogs (there are no Russian analogs of this device) are its availability and a lower (by a factor of 3 to 4) cost. Moreover, it was certified as a medical instrument in Russia (Ross Ru.AYa79.R15452) and in Europe (EC CERTIFICATE N110176QS/NB). 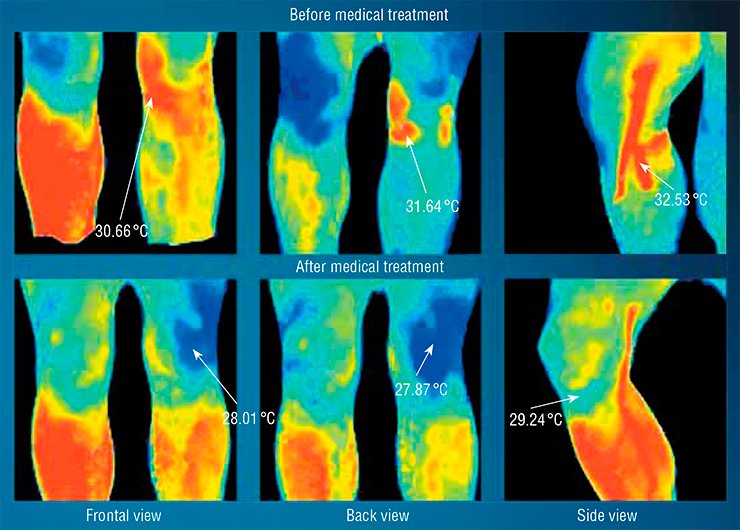 The object image is formed in SVIT by a special IR objective and is detected by a matrix radiation detector mounted in the focal plane of the objective. As the magnitude of the output signal from the photosensitive elements of the detector is proportional to the object temperature, the image can be visualized as a black-and-white or colored thermogram.

The IR radiation detector is a hybrid integral circuit consisting of InAs-based semiconductor capacitors mounted on a cooled pedestal of a cryostat. The photosensitive elements of the semiconductor matrix transform light quanta into electric charges, which are read out by another integral circuit (Si multiplexor), amplified, transformed, and fed to a computer. 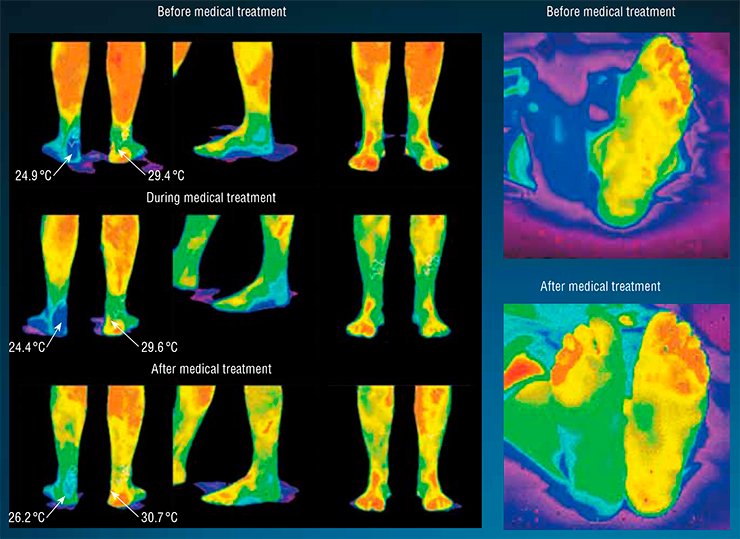 Modern technologies make it possible to visualize things that cannot be detected by the human eye, thus appreciably extending the capabilities of science, industry, and medicine. For instance, by using the “infrared eye” of the IR imager, it is possible to detect the disease at an extremely early stage, avoiding the use of other (more complicated and painful) diagnostic procedures. 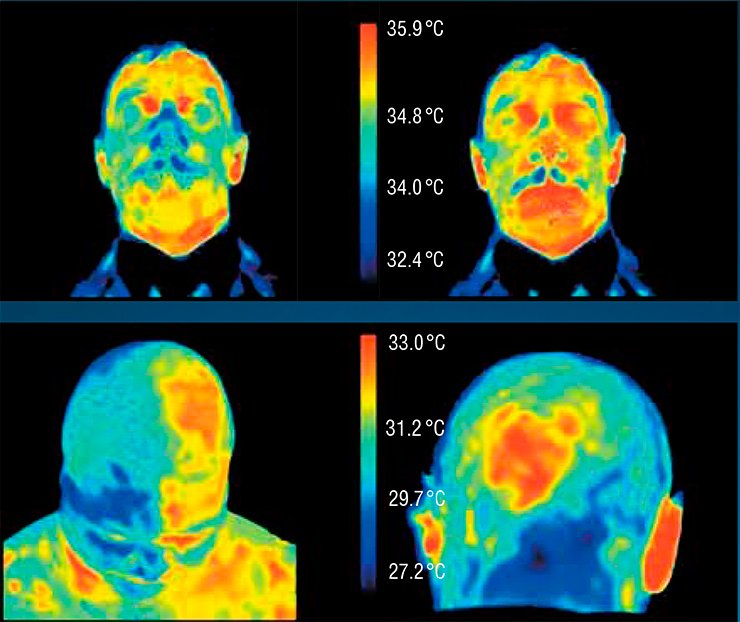 A particular advantage of the IR imager is its ability to give a clear pattern of the temperature field of the object being examined rather than a mere list of numbers. As a result, it is possible to see the relationships between various phenomena and to catch the general trends of the occurring processes. At the same time, the IR imager provides extremely accurate data on the object temperature. Owing to such a unique combination of clear visualization and accuracy, IR imagers have very promising applications in various areas of human activities.