World in the Eye of Science

Every year, Olympus BioScapes Competition receives more than 2,000 photos and videos from professional and amateur microscopists from over 70 countries worldwide to chose ten winners.

In this issue of SCIENCE First Hand, we present the photos that won the 2013 competition

At the crossroads of art and science 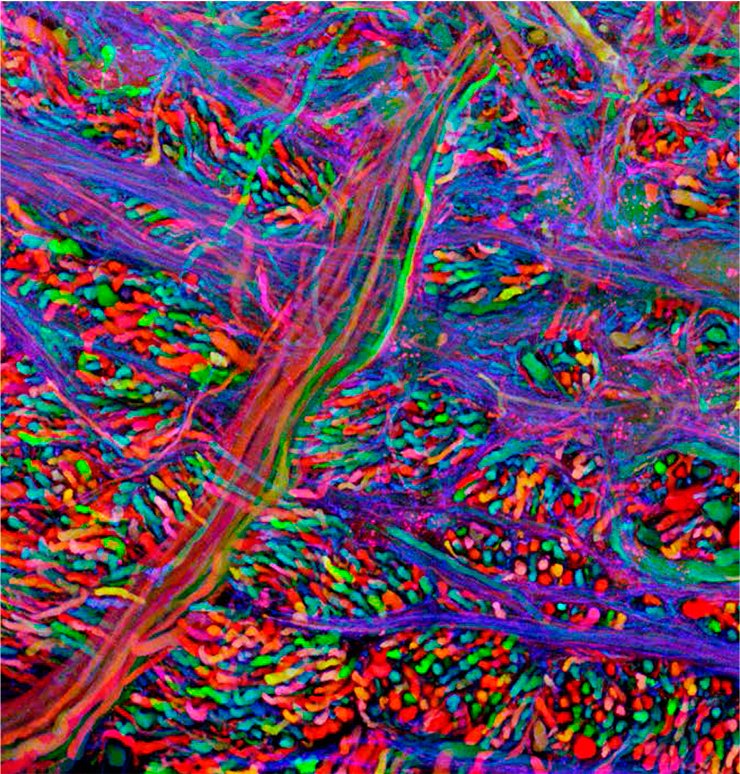 Images of the central nervous system in a Brainbow transgenic mouse, each color represents the parts of a different neuron.

A composite image showing a collection of single-cell fresh water algae, desmids. Desmids exhibit a vast diversity of sizes from 10 microns or smaller to 0.3 mm or more. The red in the image comes from the innate fluorescence of chlorophyll. Organisms include (concentric from the outermost in): Micrasterias rotata, Micrasterias sp., M. furcata, M. americana, 2x M. truncata, Euastrum sp., and Cosmarium sp. 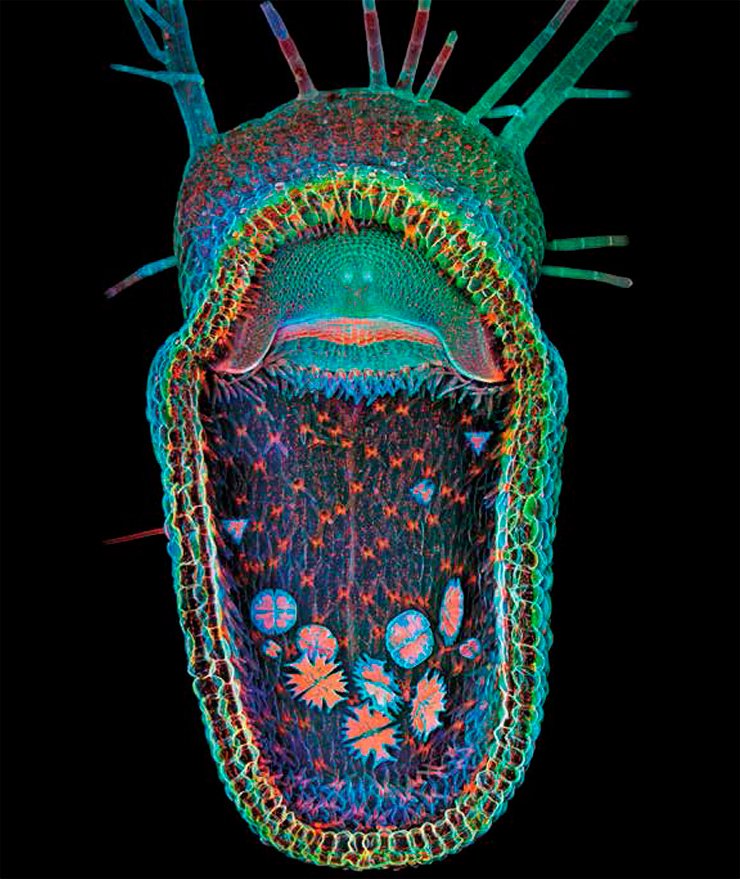 Open trap of aquatic carnivorous plant, humped bladderwort (Utricularia gibba). The floating plant digests microinvertebrates that are sucked into its trap a millisecond after they touch its trigger hairs (hair bases are seen in the center of the domeshaped entrance). The traps also provide a microhabitat for singlecell green algae, predominantly desmids, visible here. The red in the image comes from chlorophyll’s innate fluorescence. 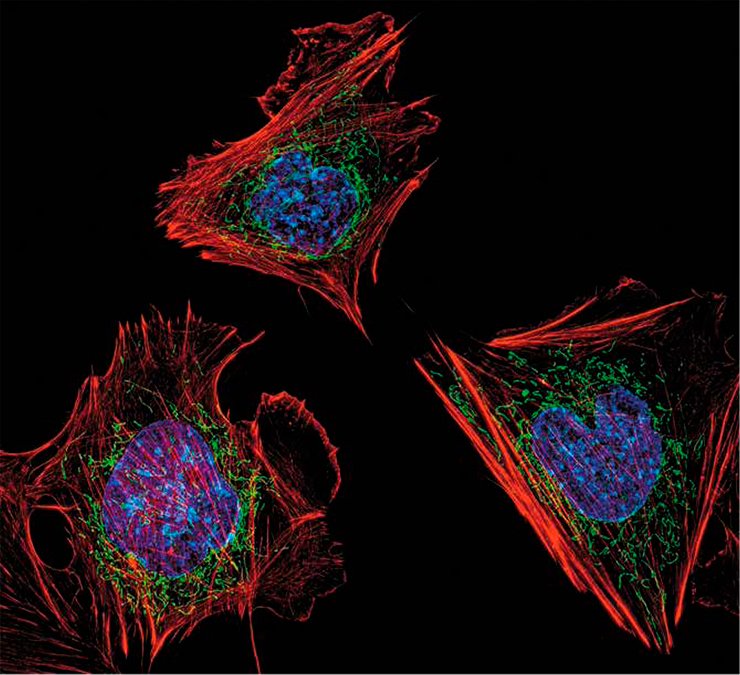 Mouse embryonic fibroblasts showing the actin filaments (red) and DNA (blue). The image also shows the insides of mitochondria, which were visualized by expressing a green fluorescent protein (GFP) fused to a mitochondrial localization sequence. 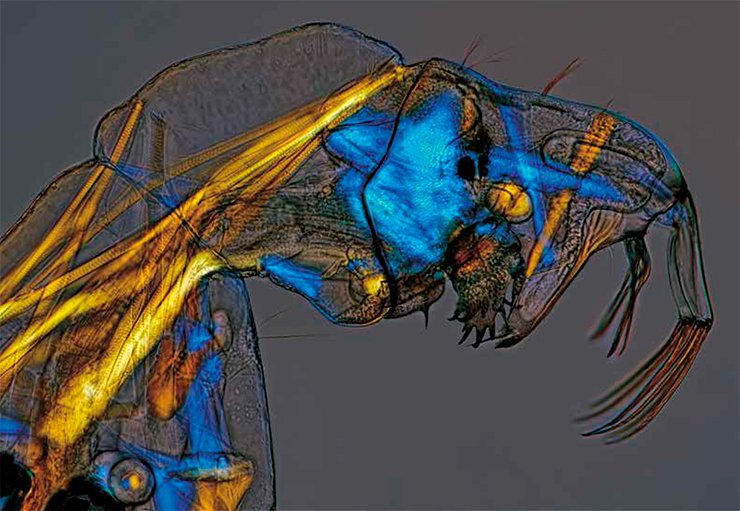 Even adult phantom midges (Chaoboridae) are almost transparent, not to mention their larvae (above). Adult males of these amphibious insects have a bushy mustache; all mature individuals either are pure vegetarians, feeding on nectar, or even get by without food. Unlike their parents, phantom midge larvae are typical predators. They catch their prey—the larvae of other insects and crustaceans—with a thick proboscis.

The colorless and transparent musculature of phantom midge larvae is a birefringent medium; it is made visible here by specialized illumination. 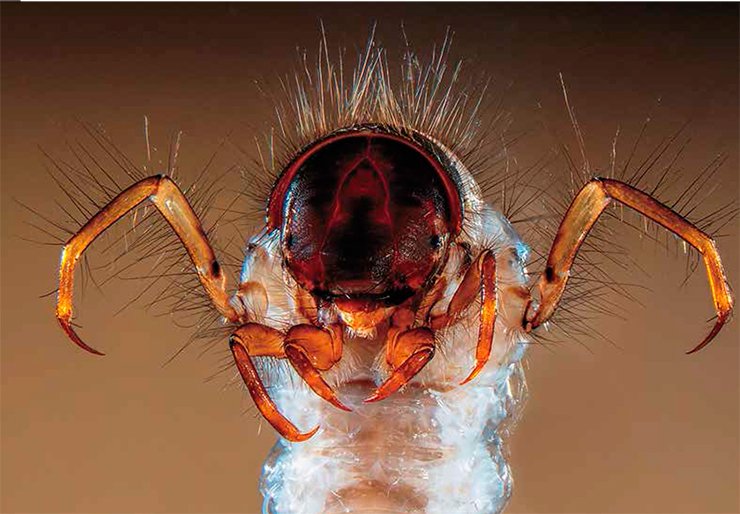 Head and legs of a caddisfly larva: Sericostoma sp., a European and North American genus of insects whose larvae live in fresh water, in gravel, stones or sand. The Sericostoma builds a case (portable tube) of sand grains to protect her flabby body, and eats plant debris and small invertebrates.This larva is a benthic macroinvertebrate that can be used for freshwater biomonitoring; because it is relatively sensitive to organic pollution and dies if water is dirty, it is a good indicator of water quality. 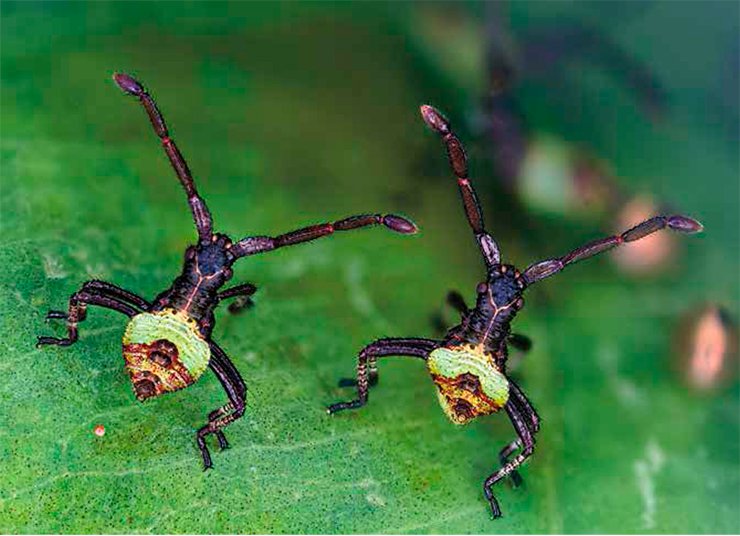 The jolly “brother bugs” (above) are bug nymphs of the species Gonocerus acuteangulatus, Coreidae family. Bugs are insects with incomplete metamorphosis, which do not go through complex morphological transformations unlike butterflies, dragonflies, or mosquitoes. In terms of appearance, bug nymphs are small copies of the adult insects, except that the nymphs have no hard elytra. Adults of this species reach a length of 11—14 mm. The babies in the photo are 2 hours old and only 3 mm in size.

“A vast similitude interlocks all…”

The American Materials Research Society (MRS) was founded back in 1973 to consolidate materials scientists worldwide and promote interdisciplinary materials research and technology development to improve the quality of life. Twice a year, the MRS organizes the popular international Science as Art Competition to facilitate communication between researchers and popularize technical knowledge. In this issue, we present the winners of 2013 spring competition—unique photos of nanoscale technological objects, which look like fantastic landscapes and unusual organisms 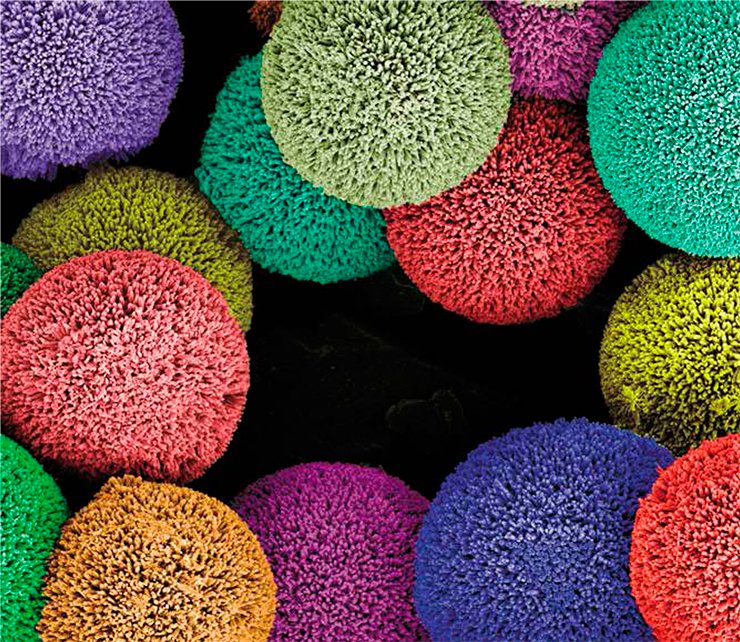 The needles of these playful hedgehog particles are rigid ZnO nanowires with nano-scale corrugation. These spiky balls are sculpted by interfacial growth of oxide material on polymeric microspheres. 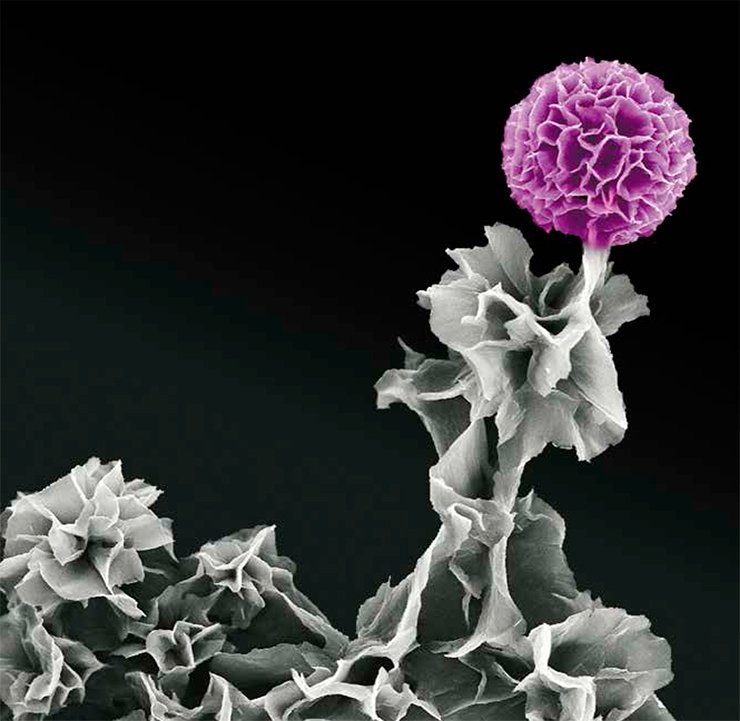 A gracious structure composed of doped aniline oligomers shows tetraaniline in “full bloom.” The aggregated sheets in the upper right corner form a cluster that mimics the look of a flower, whereas other flexible sheets represent leaves and stems. Scientifically, this morphology combines high surface area and electrical conductivity, rendering it ideal for organic supercapacitors and sensors. 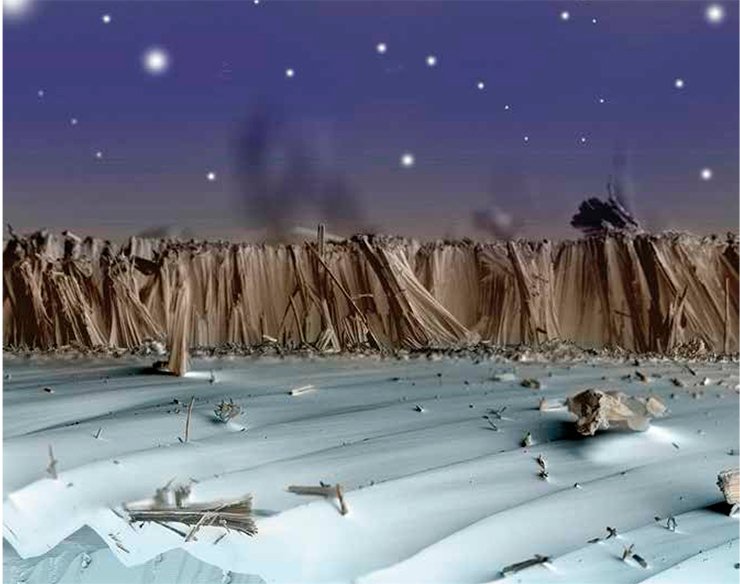 This composite of three scanning electron microscope images taken at different focal lengths of a carbonized silicon nanowire array is called On the Beach at Night, Alone. This scene takes its name from the Walt Whitman poem which describes the interconnected nature of the Universe, and the “vast similitude that interlocks all.” The near and far range images were taken with standard backscatter collection while the middle range image was taken using the Topo mode in order to capture the relief of the silicon “dunes.” 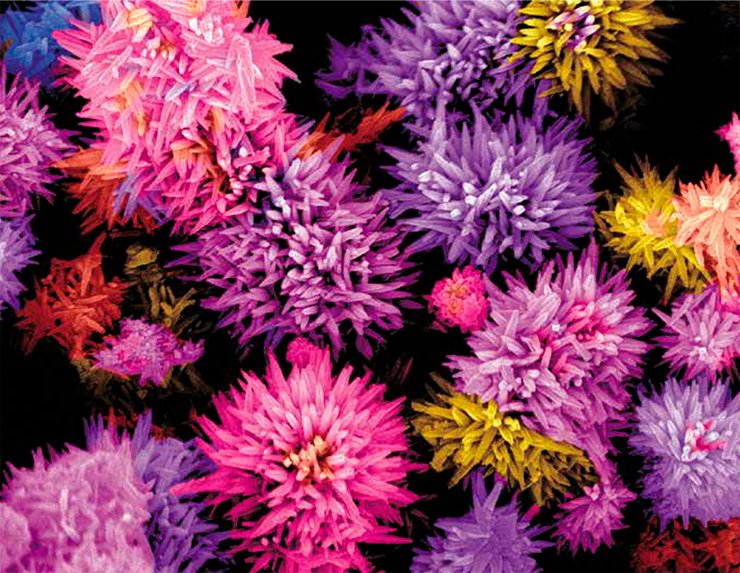 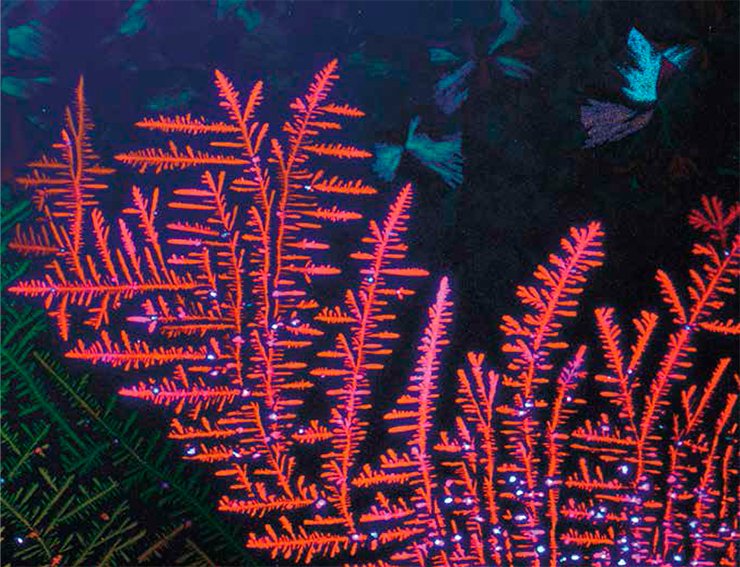 This serendipitous forest-like pattern was obtained under polarized light owing to crystal birefringence in a thin organic film. The film consists of two crystalline polymorphs transformed from the mother liquid crystalline phase, one into flower-like fractals with fractal morphology, the other trapped into a metastable spherulite, which took the shape of fluttering butterflies.

Download PDF
Keywords
Olympus
HOW TO READ THE JOURNAL?