Only half a century ago particles composing atomic nuclei of all chemical elements were assumed to be indivisible. After the beginning of the era of high energies, however, it was experimentally proved that the proton and neutron have an inhomogeneous internal structure. In accordance with the current concepts of the matter structure, like numerous short-living elementary particles, the proton and neutron consist of a moderate number of fundamental particles – quarks, which differ in terms of their mass, charge, and other internal properties. There are six types of quarks and the same number of antiquarks, which have the opposite sign of the electric charge.

All currently known elementary particles (hadrons) are classified either as bound states of one quark and one antiquark (mesons) or as bound states of three quarks (baryons). The theory does not forbid quark systems consisting of other combinations (e.g., four or five quarks), but their existence has not been reliably established until recently. Theoretical predictions of properties of such systems are extremely difficult to make because of nonlinearity of equations that describe quarks interaction.

Systems consisting of a heavy quark and an antiquark (i.e., c- or b-type) are of particular interest for theoreticians because they allow not only a qualitative, but also a quantitative analysis of their interactions. In this aspect, a bound system of a quark and an antiquark of the b-type called bottomonium (originating from the English word bottom, which gave the first letter for the b-quark) is unique. Though not all predicted states have been observed experimentally, the characteristics of those already found agree well with the predictions.

The properties of systems (particles) including b-type quarks are studied by the Belle detector operating within the KEKB accelerator/storage in Japan since 2001. These particles are obtained in collisions of accelerated electrons and positrons whose total energy is about 10 GeV (this is about 1000 times lower than in the Large Hadron Collider). 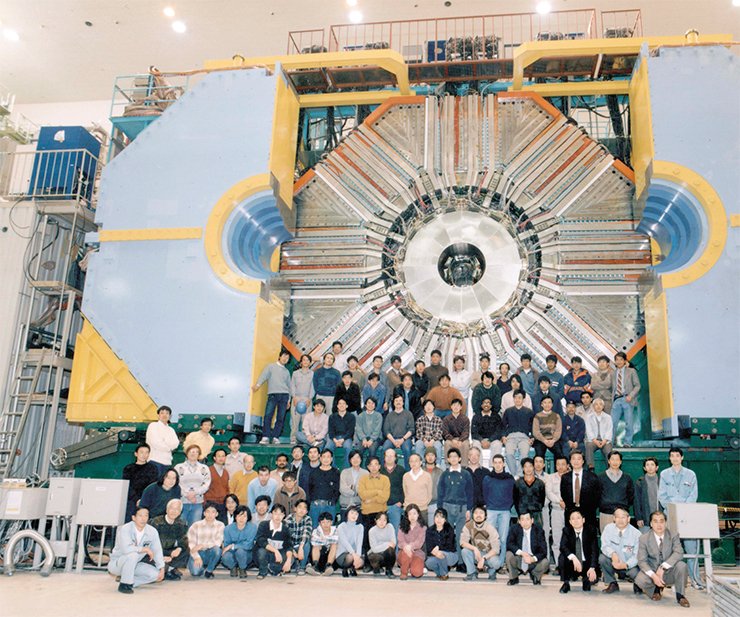 The Belle experiment involved more than 400 physicists from 13 countries. In this project, Russia was presented by teams of the Alikanov Institute for Theoretical and Experimental Physics (Moscow), Institute for High Energy Physics (Protvino), and Budker Institute of Nuclear Physics of the Siberian Branch of the Russian Academy of Sciences (Novosibirsk). The main task of this project was to study decays of B-mesons including a heavy b-quark and a light antiquark of the u- or d-type.

The first phase of activities was finalized in 2010. During long-term studies, a vast amount of data was accumulated; the analysis of these data is still underway, and the results obtained are sometimes really unexpected for physicists.

One of the first surprises was detection of a new resonant state of the quark system (the bound state of a quark system having an increased life time), which was later denoted as X(3872) *. The mechanism of its production and decay indicates that it should contain a pair of quarks (c- and anti-c-types). It was difficult, however, to identify the found state with one of the possible “tabular” states of charmonium (the name originates from the English word charm – a bound system of a quark and an antiquark of the c-type). The study of X(3872) properties showed that it can be a bound state of two D-type mesons, i.e., something like a “two-meson molecule.” If this could be proved unambiguously, X(3872) could become the first object staying outside the standard classification of elementary particles. Other possible structures of this particle, however, cannot be excluded. 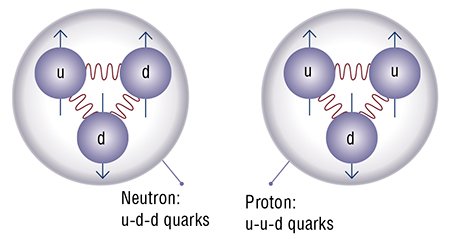 As the energy of electrons and positrons increases above 9.46 GeV (in the center of mass frame), which corresponds to the ground state of bottomonium, Y(1S), their interaction can lead to the formation of a pair of more massive B-type mesons. A further increase in the energy up to the resonance of Y(5S), i.e., 10.86 GeV, leads to a situation where the electron-positron pair can annihilate to many states including other types of B mesons. This fact appreciably expands the possibilities of studying quark systems including b-quarks.

Having performed a comprehensive analysis of results obtained in the Belle experiment and data of earlier experiments, Russian particle physicists have put forward an assumption that production of one of the not-yet-observed bottomonium states, hb, can be enhanced in Y(5S) decays. The analysis conducted has confirmed this hypothesis: hb was experimentally observed for the first time, and the probability of its production exceeds the expected value by several orders of magnitude.

Attempts to explain the observed phenomenon have resulted in a hypothesis that hb is not generated directly from the initial state Y(5S), but a certain intermediate state is formed, which subsequently decays into hb and p-meson. A further detailed analysis has confirmed this assumption. Moreover, it has turned out that two new states rather than one exist at the intermediate stage of formation of the state hb from the initial Y(5S) state. 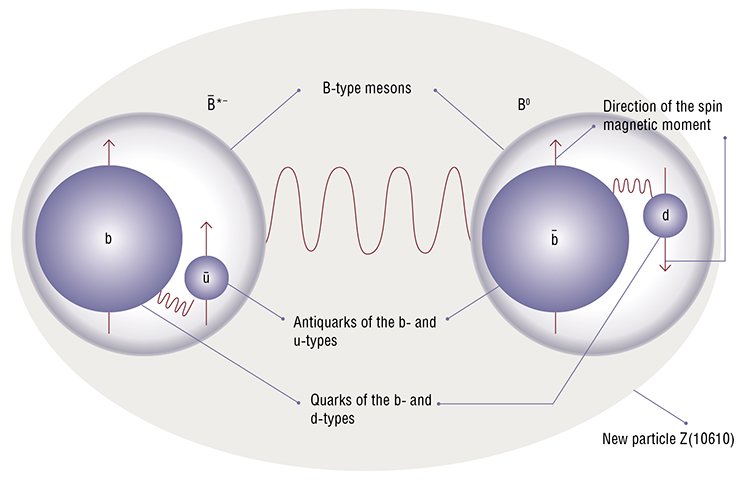 The new states were temporarily denoted as Z(10610) and Z(10650). They turned out to be objects of a completely new nature. Obviously, they should include a pair consisting of a b-quark and a b-antiquark. As the Z(10610) and Z(10650) particles have an electric charge, however, they should contain at least one more quark-antiquark pair of different types, in addition to the electrically neutral pair of a b-quark and a b-antiquark. Thus, the observed states are inconsistent with the currently used concepts of construction of particles from quarks.

Having united all currently available experimental information on the properties of Z(10610) and Z(10650), Russian physicists together with their colleagues from the USA have proposed a model to describe the new states, in which Z(10610) and Z(10650) are not just a combination of two quarks and two antiquarks (b-quark, b-antiquark, d-quark, and u-antiquark); they have a more complicated internal structure with four quarks combined into two pairs of closely bound heavy and light quarks (B-type mesons). In turn, this pair of B-mesons forms a loosely bound system. Thus, the system as a whole can be considered as a molecule with B-mesons playing the role of atoms. It is of interest that B-mesons consisting of a heavy b-quark and a light antiquark (which is lighter almost by a factor of 103) resemble hydrogen atoms consisting of a proton and an electron.

Though the exotic internal structure of new particles raises no doubts, the proposed molecular model is yet one possible description; other options cannot be excluded. If this description turns out to be valid, other similar states should exist.

Some of the model predictions can be verified by using available data, but verification of other predictions requires new experiments. It is planned to start new experiments in 2016; meanwhile, the accelerator/storage system and the detector are being upgraded.