To Gild a Cell

Colloid gold, from olden times used for medicinal purposes, is now also actively used in practical medicine and biomedical research under the name of “nanogold”. However, the mechanism of its therapeutic action is still vague. Experts from the Institute of Chemical Biology and Fundamental Medicine, Siberian Branch of the Russian Academy of Sciences (Novosibirsk) pioneered in discovering the initial stages in the actual interaction of gold nanoparticles with cells under conditions of cell culture and whole body

Chinese, Arabian, and Indian scientists produced colloid gold and applied it for medicinal purposes as early as the 5th—4th centuries BC. In the Middle Ages, it was used by many physicians, including the famous Paracelsus, while alchemists tried to elaborate, on its base, a remedy for restoring youth and health. In 1857, M. Faraday published the first paper on the methods for synthesis and on the properties of colloid gold, which got a fashionable prefix “nano” at the end of the 20th century. This prefix appeared more than just a linguistic makeweight: the look at colloid gold as an object of nanotechnologies triggered a burst of studies that have detected novel properties of the long-known metal as well as new fields of its application. 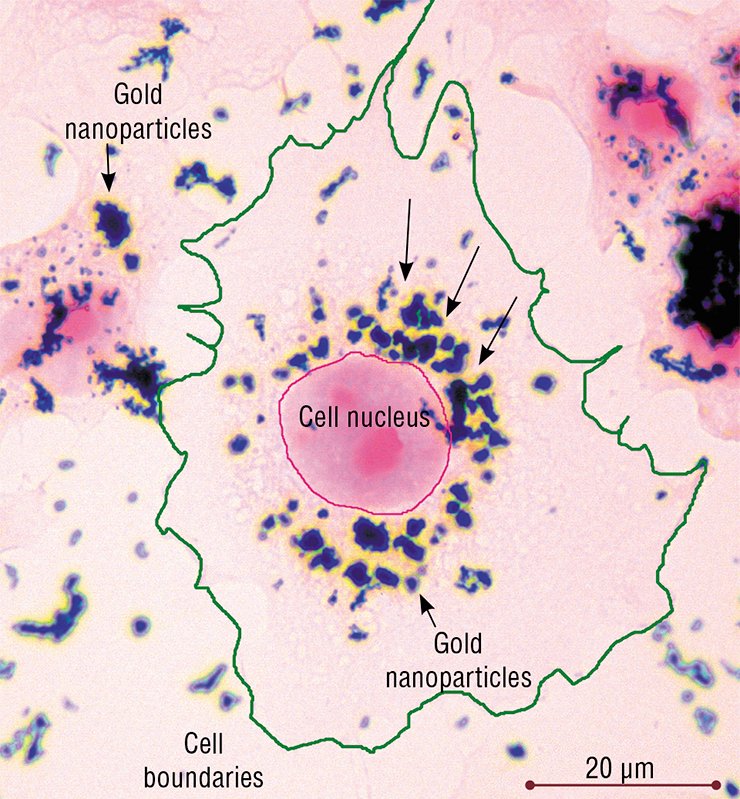 Now the noble metal is used in treating the rheumatoid arthritis and other severe autoimmune diseases as well as in medical diagnostics as a contrasting agent. A new promising direction is the use of gold nanoparticles as a structural scaffold of the nanocomposites intended for delivering molecules with medicinal effect into cells.

In all these cases, gold nanoparticles enter the human body and contact cells. However, is it safe to “gild” the body in order to control maladies? To do no harm to a patient, it is necessary to know how gold nanoparticles influence cells and to develop the preparations for targeted delivery, it is necessary to know the routes used by nanoparticles to penetrate into the cell and their migration inside the cell. Of paramount importance is the question on the “destiny” of the nanogold within the cell. Curiously enough, it is impossible to find the answers to these questions among thousands of current publications describing the studies of this material. 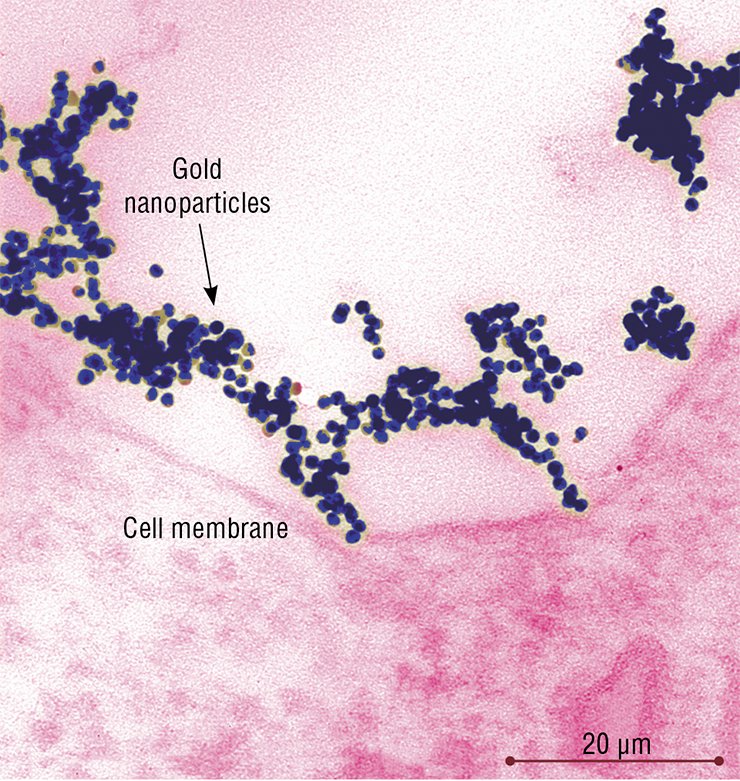 To approach the understanding of the mechanisms underlying the interaction between gold nanoparticles and cells, researchers from the Institute of Chemical Biology and Fundamental Medicine SB RAS, studied the penetration of spherical gold nanoparticles the size of about 16 nm into HeLa cells, a widely used human cell culture, and cells of hepatoma A1, the tumor growing directly in the mouse peritoneal cavity (the cells of this tumor are freely located in the ascitic fluid without forming any dense aggregates).

Gold nanoparticles were added to the nutrient medium for HeLa cells. At a temperature of 37 ºC, they are capable of the so-called endocytosis – the uptake of particles by the living cell via folding inward of a part of the plasma membrane with subsequent formation of the vesicles carrying extracellular substances into the cell. Depending on the size of the formed vesicles, this process is referred to as macro- or microendocytosis. 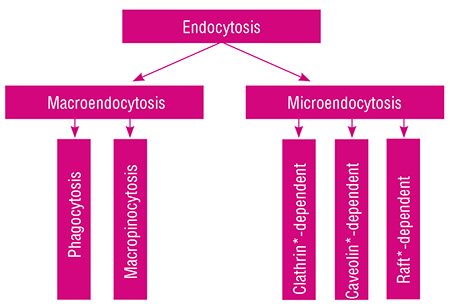 All types of microendocytosis – clathrin-dependent, caveolin-dependent, and several types of raft-dependent * – “work” with individual macromolecules and their groups, capturing them, sorting, and directing to the “proper” place; viruses enter the cell via the same pathways. Completing the brief excursus into terminology, note that the issue of endocytosis is among topical fields of modern biology and is actively studied; however, only the clathrin-dependent endocytosis has been studied sufficiently.

As for gold nanoparticles, as early as after 5-min incubation with HeLa cells, they were detectable in the “coated” vesicles and pits, the structures characteristic of the clathrin-dependent endocytosis (the “coat” is formed by the protein clathrin). After 30 min, the number of “coated” structures reached their maximum and then gradually decreased.

In complete accordance with the “road map” of clathrin-dependent endocytosis, nanoparticles were conveyed to a “sorting yard” – the early and then late endosomes, which are round-shaped membrane structures with tubular processes. The endosomes differ in the set of the contained enzymes and performed functions: macromolecules and particles are sorted in the early endosomes, while the late endosomes disintegrate the extracellular substances with the help of hydrolytic enzymes.

The number of late endosomes carrying nanoparticles in HeLa cells increased for several hours as well as the amount of nanoparticles in these cells. The late endosomes, as befits, transformed into lysosomes, the function of which is the disintegration of both the external substances taken up and the own “outworn” cellular structures. 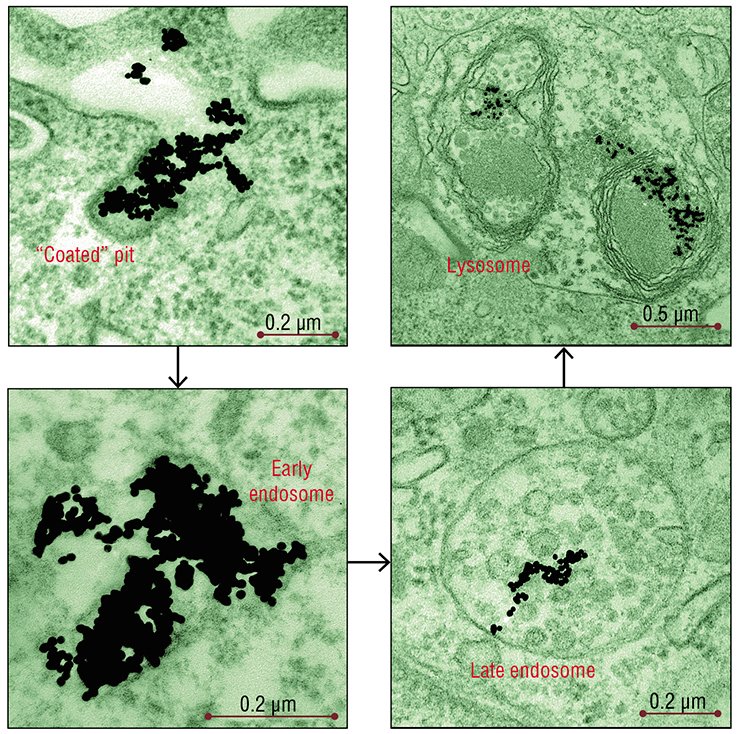 According to light microscopy data, the nanoparticle associations, similar to other large objects, also penetrated into the cell by phagocytosis. However, the fact that the main part of nanoparticles after 2—3 days of incubation was localized to lysosomes or late endosomes suggests that microendocytosis is still the main pathway of their penetration into the cells.

The uptake of nanogold by the A1 hepatoma cells in laboratory mice differed in several specific features. In these cells, nanoparticles were mainly observed in small vesicles and tubules, which represents an active raft-dependent endocytosis, as well as in the structures associated with macroendocytosis – phagocytosis and, especially, macropinocytosis – which are characteristic of these tumor cells.

During macropinocytosis, long thin processes (folds) are formed on the surface, which then join to take up everything that gets inside. Thus the membrane vesicle, macropinosome, is formed. The processes providing for utilization of the extracellular substances that entered the cell have been poorly studied; it is a priori considered that later macropinosomes fuse with lysosomes, which is an obligatory condition for utilization of the substances captured by the cell. The only doubtless thing is that this nonspecific uptake pathway is untypical of the “normal” cells of the body, which stringently “control” the material entering the cell. On the other hand, the tuwmor cells can capture large volumes of fluid from which they utilize nutrients.

The manifestations of a raft-dependent endocytosis in the hepatoma cells decreased with time, while the main part of nanoparticles was localized in endosomes and macropinosomes. Several hours after addition of nanoparticles, they remained in endosomes, while no transformation of the latter into lysosomes was observed. 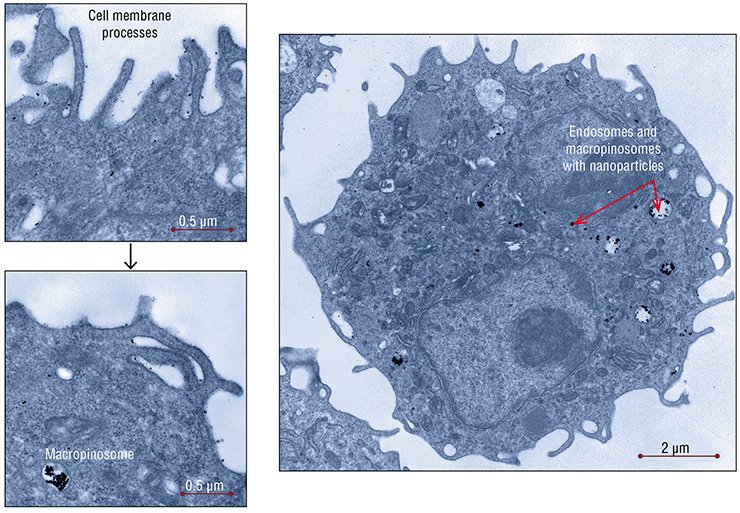 According to the results of this study, different cell types interact with gold nanoparticles in different manners. Some researchers believe that gold nanoparticles can directly bind to cell receptors. However, the experimental data rather favor another version, namely, that nanoparticles enter the cell in a passive manner with other substances taken up and via the pathways that are the most “natural” for the cells of this type.

In both cases, gold nanoparticles stalled in a confined space of the endosomal-lysosomal structures, being isolated from the cell cytoplasm by the impermeable membrane envelope. These data should be taken into account when designing combined drugs so that the medicinal molecule could separate from the gold “carrier” to enter the cell cytoplasm at the stage when early endosomes are formed.

Certainly, it is yet unclear to what degree this membrane “fence” is stable, whether it can hold the nanoparticles until the moment of cell death, and whether the nanoparticles kept in lysosomes will be able to induce pathological responses of cells. The search for the answers to these questions and others, far from being “nanoquestions,” is the subject of further research. As for various practical applications, one of the integration projects of the Siberian Branch of the Russian Academy of Sciences, entitled “Development of the Methods for Laser-Induced Heating of Metal Nanoparticles in Biological Tissues for Thermal Destruction of Pathological Cells”, is aimed at solving this problem.

Ye. I. Ryabchikova, Doctor of Biology; I. A. Pyshnaya, Candidate of Chemistry; and Yu. Ye. Spitsyna (Institute of Chemical Biology and Fundamental Medicine, SB RAS, Novosibirsk)