The first glaciers in Eastern Siberia were discovered at the turn of the 20th century. Nonetheless, until the mid-20th century, the majority of researchers believed that glaciers could not exist in this region since the precipitation was too small and, most importantly, the mountains were too low: 1,000—1,500 m below line 365, a theoretical snow boundary where temperature is always below zero and glaciers can form. However, despite the theory, three mountain systems with ice bodies are currently known in Eastern Siberia, including in the northern Baikal region. Although Baikal glaciers were first mentioned at the beginning of the Baikal–Amur Mainline construction, incontestable evidence for the existence of glaciers in the northern Baikal region was obtained only in 2011–2013 by an expedition to the Barguzin Range, which was organized by the Sochava Institute of Geography, Irkutsk (Russia). Monitoring of the boundaries of the Barguzin glaciers can provide valuable information for predicting climate changes in the northern shore of Lake Baikal

Glaciation influences the eustatic sea level. In doing so, it determines the living conditions of organisms, including humans. The greater surface of the globe is covered by ice, the farther the Ocean retreats. This statement largely concerns huge ice masses, such as those in Antarctica. However, mountain glaciers can affect the life of regions and nations by supplying them with sweet water.

Although the contribution of minor mountain glaciers, such as in East Siberia, is insignificant in this regard, they are of great interest for scientists as natural indicators of climatic changes

The global climate constantly varies, and the Earth experiences glaciations on a periodic basis of about 100,000 years (Barry, 2006). Deep drilling of bottom sediments in Lake Baikal has shown that interglacials became progressively shorter and glaciations longer in the past 750,000 years (Kuzmin, 2005). It is conceivable that the current warming will soon give way to cooling.

Current climatic trends can be traced from the behavior of glaciers, the heritage of past glaciations. In this context, minor glaciers, which have shorter response times, are particularly interesting.

Large and small glaciers occur on all continents, including Australia and Africa. As for East Siberia, in the end of the 19th century the prominent climate scientist A.I. Voeikov expressed the opinion that glaciers could not exist with the presence of the mighty Siberian High, where precipitation was small and tended to occur in the hot summer. In addition, the formation and survival of glaciers was hampered by the low heights of mountains, which are 1300—1500 m below the lower boundary of the chionosphere, part of the troposphere where snowfields and glaciers can form on the Earth’s surface. The lower boundary of the chionosphere matches the climatic snowline, where the number of days of snow cover is 365, that is, snow stays all year round.

Circannual preservation of ice demands temperatures not rising above 0°C. Temperature decreases with height above the Earth’s surface. In the troposphere, temperature decreases by 0.65°C/100 m, reaching –73 °C at the troposphere/stratosphere boundary, 12 km. In the stratosphere, temperature rises to 0°C. The lower portion of the troposphere, from 3 to 10 km, is named chionosphere (derived from χιόνι, the Greek for snow). Temperature is always below zero there.
Regions where the chionosphere bottom touches the surface are covered by ice or perennial snow. It can be observed in mountains, which “pierce” the chionosphere. The line demarcating the contact of the chionosphere and the Earth’s surface is named line 365, or the theoretical (climatic) snowline. The highest levels 365 are recorded above the Andes and Tibet, at ca. 6500 m. Level 365 above the equator is 4400 m. At higher latitudes, it decreases to 200—300 m in Arctica and to the sea level in Antarctica


Voeikov’s theory was supported by the outstanding geographer L.S. Berg in 1938, and it dominated till the middle of the 20th century in spite of the discovery of Peretolchin and Radde glaciers in East Sayan at the turn of the 20th century. Only the discovery of glaciers on the Kodar Range in Central Transbaikalia by the physical geographer V.S. Preobrazhenskii destroyed the myth and proved that glaciers could survive below level 365 owing to the specific local climate and cold accumulation (Popovnin, 2006).

Presently three mountain systems with ice bodies are known in Siberia: the aforementioned Kodar Range, East Sayan (Munku-Sardyk Range, Oka and Sayan snow-topped mountains) and the northern Baikal region (Baikal and Barguzin Ranges). The Baikalian glaciers were not catalogued until recently, and their very existence was disputed.

And yet they are

Snow and ice bodies include ice mounds, snowfields, rock glaciers, and glaciers. The origin of ice mounds differs from all others, whereas snowfields, glaciers, and rock glaciers are genetically related (Kovalenko, 2011). These bodies have classifications of their own, based on different criteria. Snowfields are classified with regard to their lifetime as perennial and seasonal. Glaciers are classified according to their operating mode as surging, valley, corrie, hanging, cover, mountain, etc. A snowfield is typically a glacier predecessor until it produces a bed (corrie) in a range slope, forms ice, and begins to flow. In contrast, a rock glacier is the final stage of a common glacier. It is a mixture of rock debris and ice, which behaves as a glacier and has no apparent provenance

Glaciers on the Barguzin and Baikal Ranges were first mentioned at the beginning of the Baikal–Amur Mainline construction, followed by extensive development of the region. In 1985, A. A. Koshelev, an energy scientist from Irkutsk and honored Soviet traveler, discovered a mountain ice body on Barguzin and took its image. However, even that finding did not convince geographers. Incontestable evidence for the existence of glaciers in the northern Baikal region was obtained only in 2011–2013 by the expeditions launched by the researchers of the Sochava Institute of Geography, Irkutsk.

The preparation of the glacier expeditions started with comprehensive examination of the area, not only in maps but also in space images of various scales. In doing so, the researchers found 187 presumable glaciation sites. However, most of them were later found to be transitional forms: perennial snowfields or rock glaciers. 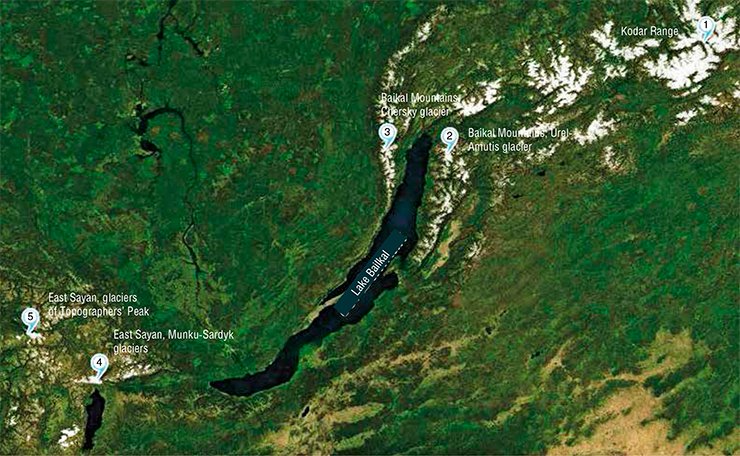 In 2011, the Irkutsk expedition investigated the region from Khakusov Bay in Baikal, near a famous natural resort with thermal springs, to the headwaters of the Tompuda River, the site richest in glaciers, according to topographic maps (Kovalenko and Kitov, 2011). The scientists reached lakes Urel-Amutis and took images of the lower part of a glacier tongue but failed to approach the glacier itself.

In the next year, the geographers chose a route farther north, from Verkhnyaya Zaimka Village in the Severo-Baikalskii raion of Buryatia along the Upper Akuli River to the river source. Judging from old topographic maps, the largest glacier of the Barguzin Range was expected to be on the Akulimashkit Peak.

It was discovered that the glacier, formerly large indeed, had substantially degraded, and its area was much smaller than in maps, only 0.06 km². This disagreement may have been related to the fact that the topographers had took large perennial snowfields for a continuation of the main glacier owing to the notable cooling of the 1950—1960s. The expedition named the glacier Akuli after the neighboring river. 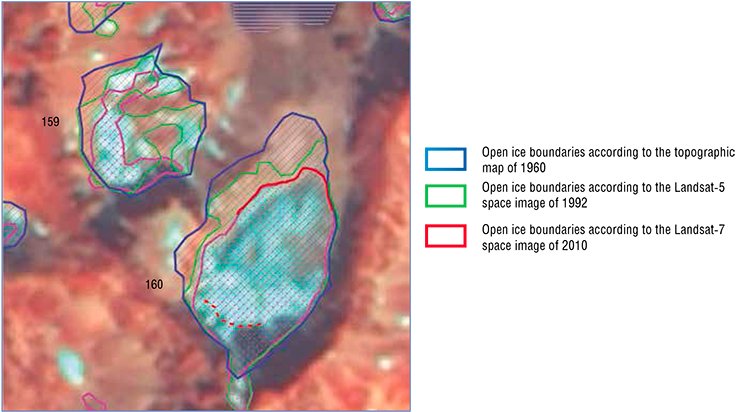 According to the expedition plan, the team was to have crossed a plateau with a multitude of lakes, the former ice body center in that part of the range. However, the route proved to be too difficult, and the weather was unfavorable. Therefore, the geographers finished the season. Winter was at hand, hailing and snowing mountain summits (Kovalenko et al., 2012).

The largest glacier of Barguzin capitulated to the geographers only in 2013, where they approached it from a different direction and ascended much higher than in the year before. It was just there that they found a glacier of 0.14 km2 in area near the sources of the Right Frolikha and Tala-Svetlinskaya Rivers. The glacier was named Urel-Amutis (Kitov et al., 2013). 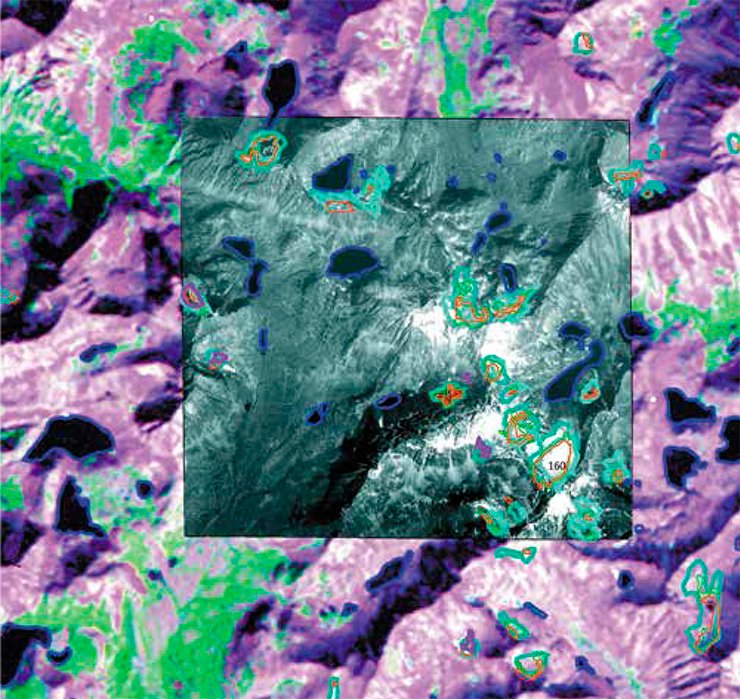 IN THE HIGH-TECH EPOCH
The geographers’ work goes well beyond the discovery and registration of a glacier. The next steps are the evaluation of the response lag of processes influencing the glacier and constant tracking of changes of its boundaries.
Presently, this work is made easier by remote watching facilities. They produce prompt and accurate quantitative information about hard-to-access and dangerous objects, including glaciers. Such facilities include ground laser scanners, GPS detectors, and radiolocation satellite services. They allow construction of digital topographic models within the accuracy of millimeters and tracking of glacier area changes.
Satellite data permit scientists to trace glacier changes at any site of the globe, although their efficacy is diminished by clouds. In such cases, air drones equipped with scanners come to the aid. Georadar data are used in the construction of the glacier profile, modeling of its bottom surface, and calculation of the glacier volume with the help of ground scanners. Automated weather stations have been installed in many mountain systems. They transfer data through a wireless system on the real-time basis. The data are stored in corresponding databases, where they are accessible via Internet

Glaciers of the Barguzin Range have many unique features. First, their mysterious origin suggests that they are remnants of a great glacier of the Akkemian time (5–4 ka BP). However, the most important is the fact that glaciers at these latitudes are expected to be at heights above 3500 m. Actually, the Barguzin glaciers occur at 2300 m, much below the snowline; that is, where no glaciers can exist in theory.

The tremendous work done by researchers of the Sochava Institute allowed refinement of topographic maps constructed in the middle of the past century. When precise locations and parameters of Baikal glaciers were determined, they could be submitted to corresponding databases.

The researchers are convinced that Barguzin glaciers can provide valuable information for predicting climate changes in the northern shore of Lake Baikal. For this purpose, their boundaries should be constantly tracked.