A Blacksmith and a Shaman

The blacksmith is a significant and honored personality in all traditional cultures where metalwork is known. Even today, the Eastern Buryats believe in the divine origin of the smith’s craft; they believe that a person receives it as a gift from God. And with the gift he gets the patronage and protection of the deity who is responsible for the smith’s work. Like a shaman, whose craftsmanship is inherited, a blacksmith should come from a family of blacksmiths. As for the Buryats, blacksmiths and shamans always go hand in hand: the shaman protects the blacksmith and his craft, and conducts blacksmith ceremonies. In his turn, the blacksmith makes metal shamanistic accessories and articles of the shaman’s clothes, which protect him when he travels from one world to the other.

Today, in the 21st century, the century of developing technologies, there is a small «islet» in Eastern Siberia – time seems to have never touched it. Here people live according to their own rules. They thoroughly keep up the traditions of ancestors and pass the wisdom of generations on to their children. They remember their roots and have sacred faith in the protection of spirits. They pray and give tributes to them every day. It is the Shaman who is an intermediary between spirits and people. Robed in special ritual clothes, which protect him when he travels between the worlds, he communicates with the spirits. The shaman’s clothes are an exclusively important component of the ceremonial, its metal parts being made by a blacksmith, whose personality is significant and even sacred in the cultural tradition of the Eastern Buryats

A blacksmith is a significant and honored personality in all traditional cultures where metalwork is known. The skill of metalwork always had divine origin in the mythology of various nations. A hero with a gift from God, a blacksmith-god armed with a hammer—this is the Greek Hephaestus, the Roman Vulcan, the Scandinavian Tor, the Hindu Vishvakarman, and the Slavic Svarog. Some Christian saints, e.g., St. Eligy, are considered to be the patrons of goldsmiths and blacksmiths. Many various merits were ascribed to blacksmiths in Slavic culture: the ability of healing, fortune-telling, and driving away evil spirits. In myths, it was the blacksmith who often played the role of a cultural icon.

Even today, the Eastern Buryats believe in the divine origin of a smith’s craft; they believe that a person receives it as a gift from God. And with the gift he gets the patronage and protection of the deity who is responsible for the work of a smith. 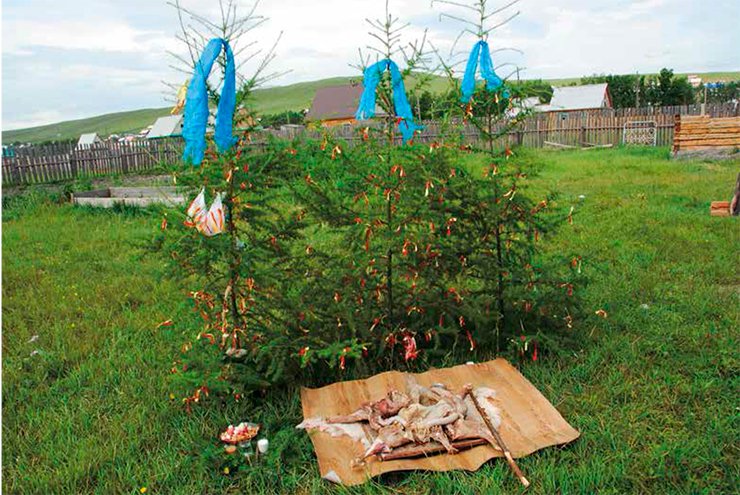 The blacksmith was the first among other craftsmen who gave up household duties and devoted himself to metalwork. The smith’s craft is closely connected with fire. That is why blacksmiths usually settled down on village outskirts and devoted all their time to work. This made a blacksmith a still more mysterious figure, so that he was often given the same status as the shaman or wizard.

In any case, a blacksmith always stood out from the crowd; rumors were constantly circulating about him, and legends arose. Apparently, this is the reason why one of the most wide-spread surnames in the world takes its origin from a smith. The number of the Kuznetzovs, Kovalevs, Smiths, and their other namesakes all over the world speaks about the special status of their far ancestors. But let’s return to Eastern Siberia.

According to the views of the Eastern Buryats, a deity named Damdin Dorlig (Damzhan sahyuusan according to the Buddhist canons) gives special protection to blacksmiths and goldsmiths. At first Damdin Dorlig was fiercely antagonistic toward Buddhism and even tried to kill a lama-preacher by the name of Badmasambava. But he failed and then decided to adopt the Doctrine. To expiate his guilt he began to protect goldsmiths and blacksmiths. Besides, in the first half of the day he worked as a blacksmith in Devazhin, i. e. in paradise (Gombozharov and Sagalaev, 2012)

The white shaman performs the blacksmith honoring ceremonial. The fringe covering his face and metal pendants sewed to his cloak sleeves resemble a bird’s plumage (Alkin, 2003). Not only does the fringe cover the shaman’s face; it also lets him stay in some intermediate state, balancing between day and night, spirits and humans. This helps him fall into a trance faster; it also allows the believers to communicate with the spirit through an intermediary. In his left hand the shaman holds a rod, topped with a firedrake’s head. The firedrake has the body of a snake, while his extremities have the hooves of a horse. Thus, the white shaman’s rod symbolizes the four elements: fire, water, earth, and air

Since then Damdin Dorlig has been pictured on Buddhist thagkas. It is he whom a blacksmith must give a gift every day. Not only does success of his work depend on this, but also all his well-being. Even if a smith’s descendants choose another field of activity, they have to honor Damdin Dorlig and their smiths-ancestors. Otherwise, unfavorable changes can occur in their life. In this case only a shaman who has blacksmiths among his ancestors is able to help by performing the necessary rites. 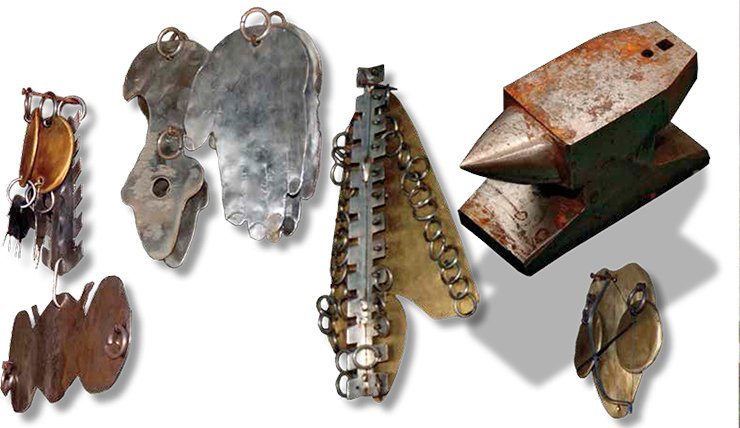 In 2010, the authors were lucky to observe and even to shoot a video of a blacksmith ritual in the settlement of Aghinskoye (Buryat district). The man who had commissioned the ritual was not a blacksmith, he was a lawyer. But when times were hard, the row of failures made him recall his smiths-ancestors, and he came to a shaman. The spirits told the shaman that it was necessary to perform a special religious ceremony – to bring gifts to his smiths-ancestors. The rite took most of the day; it included the shaman’s kamlaniye – calling the necessary spirits, sacrificing the goat that was chosen because it had a number of essential characteristics, and the shaman’s falling into a trance. And before this there was a reviving of ritual trees, the larches that had been dug into the earth. Since that moment they had become not ordinary but sacred trees. They connected the Middle World, the world of people, with the Upper World, where deities dwell. 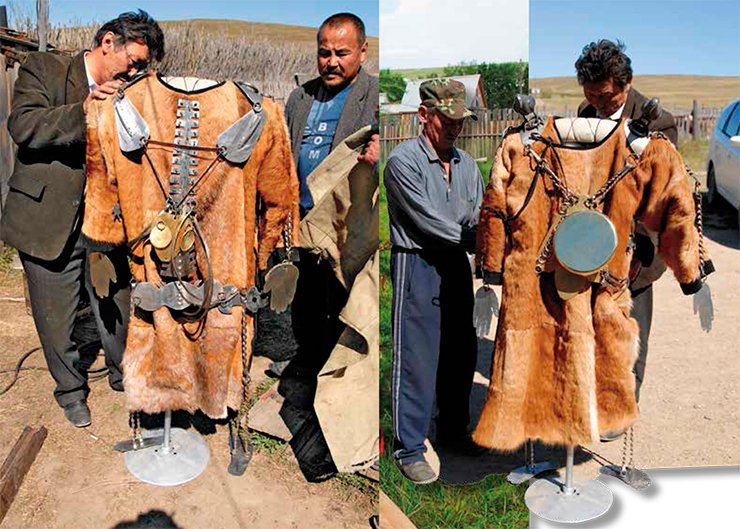 JOURNEY BETWEEN THE WORLDS The shaman’s vigor increases with each new ordination, i.e., with passing to a higher level. He gets more assisting spirits and additional ritual articles, e.g. an iron cane with a horse’s head, or a boar- , bird- or bell-shaped pendant. The clothes of the Eastern Buryat shaman are a silk gown and a cloak worn over the gown and usually made of roe-deer skin or bearskin. An iron model of a human skeleton is fastened to the cloak. It consists of the backbone, shoulder-blades, collar-bones, spoke bones, palms, feet, ribs, hip bones, and so on. Instead of the scull there is a cap with eyes and a horned iron shaman’s crown, to whose back side a small chain is fastened – it imitates the spinal cord. A big metallic heart is attached to the chest and is hidden under a protective mirror. The symbolic skeleton protects its owner while he is travelling to the other world and back. Only the most vigorous shamans, who have gone through a definite number of ordinations, may be given this sort of clothes. The cloak is usually sewn by women, and the iron model of the skeleton is made by men who are hereditary blacksmiths.
All the ritual articles, including clothes, must be vivified by settling spirits in them during the shaman’s ordination ceremony. Before that the articles are not sacred. After the ceremony, no stranger is allowed to touch the clothes. It is a sin, and spirits may punish the disturber


When spirits install themselves in the shaman’s body, everyone may get answers to the questions which are important for them. If the spirits like the entertainment and food, they willingly answer the questions of the participants; they explain reasons for their misfortunes and offer valuable practical advice. The ceremony ends with a fire, its flame carrying the gifts for the spirits to the Upper World – the meat of the sacrificial animal, all sorts of delicious food, and the sacred larches. Nobody knows whether the ceremony has produced the miraculous effect that was expected, but everyone who was present there took it extremely seriously and sincerely believed in its effectiveness.

“…Birds of a feather”

The Yakut proverb says, “A blacksmith and a shaman are birds of a feather.” As for the Buryats, blacksmiths and shamans always go hand in hand: the shaman protects the blacksmith and his craft, and conducts blacksmith ceremonies. In his turn, the blacksmith makes metal shamanistic accessories and articles of the shaman’s clothes which protect him when he travels from one world to the other. You can sometimes read that blacksmiths “were revered as much as shamans, they competed with them and sometimes even defeated them” (Khangalov, 2004).

To produce all metallic articles of the shaman’s clothes requires time, and hard and tedious work. Though nowadays a blacksmith uses an angle grinder and drill instead of a sledge-hammer and tongs, the work begins with a symbolic ritual blow of a sledge-hammer, which should be delivered by a smith. 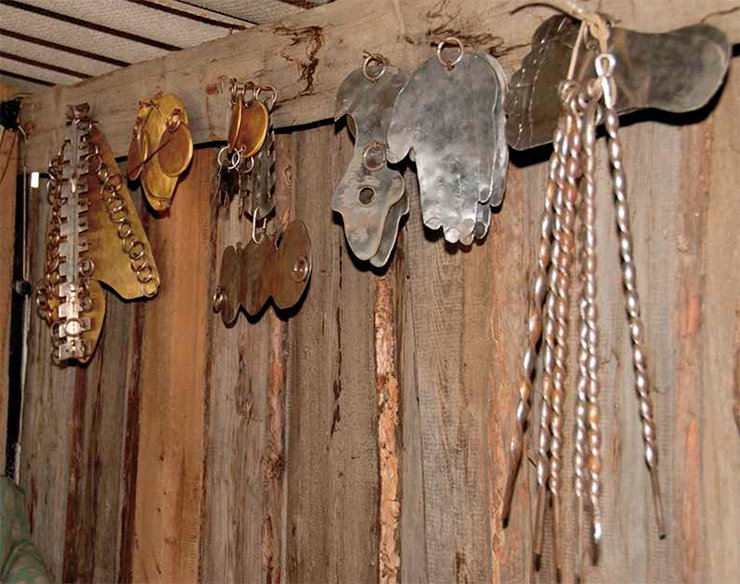 Similarly to a shaman, whose craftsmanship is inherited, a blacksmith should come from a family of blacksmiths. Lately the blacksmith’s trade has changed: now he may be a turner, or a machine-operator, or a milling-machine operator, or a goldsmith. But, in any case, as it was before, his work is connected with iron. Some blacksmiths have no genuine smithy; instead they keep its small model at home. Still, fire is kindled in its tiny hearth, a small piece of iron is heated, and the necessary ritual is performed. Mainly the exterior changes – it can hardly be otherwise, but the substance, the ties with the century-old tradition are never broken. The same can be said about the Eastern Buryat shamanistic tradition as a whole.

Lately it has been very convenient and profitable to call oneself a shaman. Workshops, master classes and battles of extrasensory experts give a lot of opportunities. However, a genuine, vigorous shaman is not a sociable person, as a rule. He does not like to show off, to advertise himself, or to be on TV.

As always, time will make everything clear. Everything true, genuine, holding on to the roots will stay put, unlike everything alien and artificial. And the world of people who preserve traditional culture will remain as well: the blacksmith’s hammer and the shaman’s tambourine can be heard now: they are in tune with each other and with the world around us. The only thing we need is to be able to hear, or more precisely, to feel this ancient music.

The article was written with the financial support of The Program of Basic Research of the Presidium of RAS “Traditions and innovations in history and culture” (the project “Text and ritual in modern society: Turkic-Mongol peoples of Siberia in the changing world”)