Visitors from the Ice Age

In 2010—2011, several perfectly preserved mummies of the so-called mammoth mammalian fauna of the Ice Age were found in Yakutia, the coldest region of Russia. They included a woolly mammoth (Mammuthus primigenius Blum.), Lena horse (Equus lenensis Russ.), and primeval bison (Bison priscus Boj.). Presently, they are being comprehensively investigated

Yakutia is an extremely cold region, where the Pole of Cold of the Northern Hemisphere is located. For long, animals and plants living in the Ice Age have been found there frozen in the permafrost. The best known of these species is the woolly mammoth, which became extinct about 4000 years BP.

In 1799, Yakutian natives found a whole frozen mammoth mummy. The young assistant professor M. Adams sent its skeleton with remains of wool and tissues to the St. Petersburg Academy of Sciences. Since then, more remains have been found: other mammoths, the Lena horse, woolly rhinoceros, primeval bison, and wolverine, which have rested in permafrost rocks for 10—20 ka. 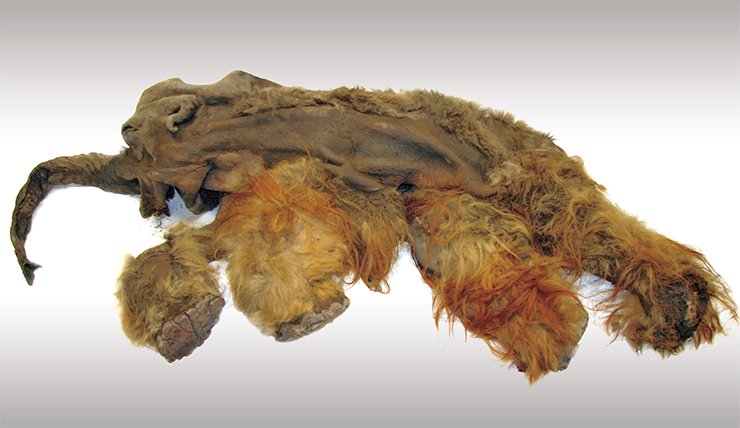 The investigation of these mummies provided information on not only anatomy and morphology of these extinct animals but also on their diet and life environment. Presently, remains of the mammoth fauna draw attention of microbiologists and molecular geneticists. The latter have already sequenced the mitochondrial genome and half of the nuclear genome of the mammoth.

Therefore, each finding of ancient animals preserved with soft tissues at low temperatures is of paramount interest for experts in paleontology, paleogenetics, paleoecology, and paleogeography.

The past two years were particularly fruitful for Yakutian scientists. In July, 2010, frozen remains of an ancient horse were found on the southern coast of the Laptev Sea, and in August, a mummy of a young mammoth was molten out only 50 m apart from the former finding. One year later, a primeval bison mummy was found 100 km southwest, on the shore of Lake Chukchalakh. All three were found by members of the Yukaghir clan. In summer, they practice traditional activities – hunting, fishing, and collection of mammoth tusks – in this extreme north region of Yakutia, most difficult to approach, harsh, and poorly developed. 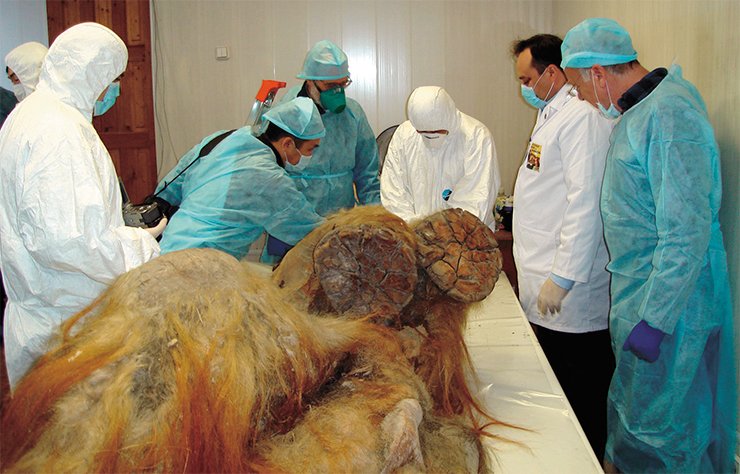 In the Ice Age, the Yana–Indigirka Lowland was a vast tundra–steppe area with rich grass vegetation. These conditions were favorable for large mammal populations. It is also evidenced by earlier findings of animal burials, including the mammoth cemetery discovered in 1994 (Boeskorov et al., 2006).

The mammoth child found in 2010 was named Yuka after the Yukaghir clan, in accordance with paleontologists’’ tradition. The main value of this finding is that it was the first time that scientists obtained an adolescent mammoth mummy (4—6 years). 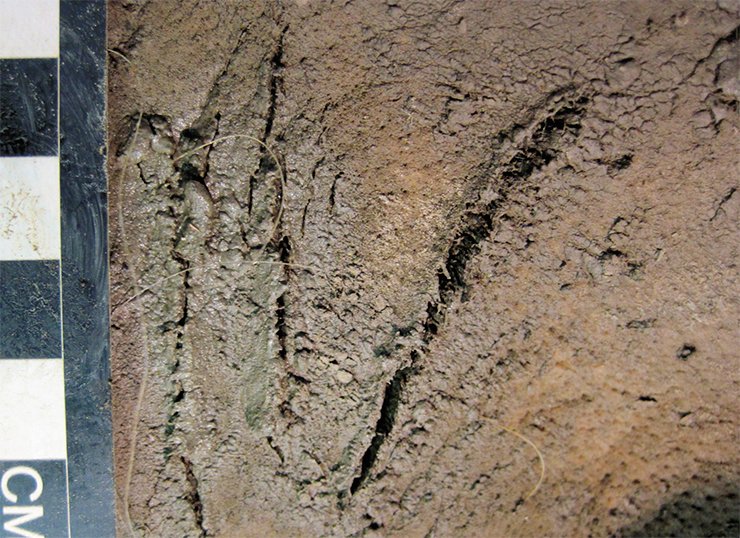 Yuka’s skin is well preserved in spite of injuries. The trunk is nearly intact. It happens extremely seldom; probably, this organ was exquisitely tasty for predators. Most of bones and soft tissues, as well as parts of the skeleton, including the skull with remains of soft tissues and ligaments, are also well preserved. Yuka was a female. Its height at the shoulder was about 165 cm, and length, about 205 cm. The weight of the living mammoth is estimated to be 450—550 kg.

The cause of Yuka’s death is unknown. Its neck, belly, shoulders, and backs of legs have numerous rough-edged wounds similar to traces of cave lion’s claws. However, the wounds inflicted by the terrible beast were survivable.

This is not true for the horse mummy. Apparently, it actually became prey of, most likely, cave lions. The preserved pieces of the skin bear numerous rough-edged holes and bands looking as traces of claws of a large predator. The forepart of the head seems to be bitten off, and the remaining part of the head together with the neck, as well the front legs, were torn off.

Judging from few measurements that could be done, it was a mare about five years old, belonging to a scrubby variety, probably, to extinct Lena horses. Although the remains were severely damaged by predators, it is a rare paleontological specimen of scientific and museum significance.

In contrast, the excellent preservation of the fossil bison made scientists happy. The body was all in one piece, without injuries. It is particularly important that all internals, including the gastric and intestinal content, were intact. Therefore, the bison is a unique paleontological specimen. Bison mummies are rare. By now, they have been found only in Alaska (the famous Blue Bison, displayed mounted at the Museum of Natural History, Fairbanks) and in the catchment area of the Indigirka River. However, the preservation of those mummies is much inferior to that of the Yukaghir one. 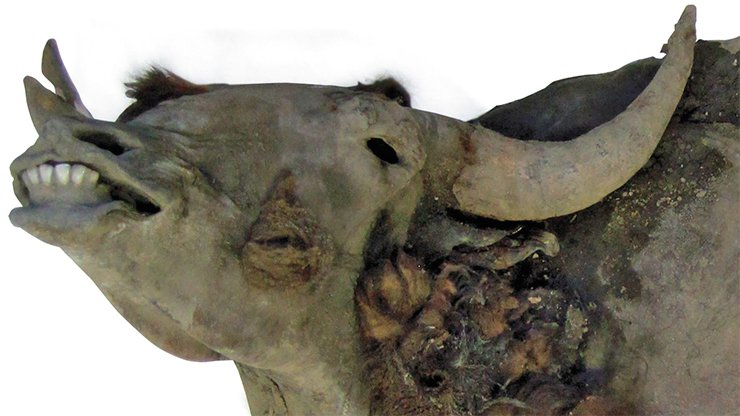 We see a young bull at the age of about 4 years. Its height at the shoulder was about 170 cm, weight 500—600 kg, and horn spread 75 cm. The cause of its death has not been determined with certainty, but the bent legs and craned neck are characteristic of the typical death postures of bisons having died of natural causes. No wounds inflicted by predators were found.

The pilot study of the new findings, conducted at the Diamond and Precious Metal Geology Institute, Yakutsk, was contributed by experts in various fields of knowledge from Yakutsk, Moscow, St. Petersburg, USA, and France. All the three mummies were morphologically examined to compare them with earlier findings and, in case of the bison and horse, with extant species.

Samples for microbiological, radiocarbon, molecular, and other tests were taken. They will permit scientists to unveil the causes and dates of animal death, their diets, the composition of ancient vegetation, and, correspondingly, climate features. It is planned to scan the mummies by computer-assisted tomography and perform isotopic analysis of animals’ teeth to obtain information on life cycles of Pleistocene mammals.

Yakutian scientists will conduct microbiological studies of the ancient microflora. One of their objectives is elimination of highly infectious diseases. Presently, deposits hosting the remains are studied in Yakutsk. Probably, the study will provide data on the ambient conditions of the burial.

The radiocarbon analysis will be done at the University of Groningen, Netherlands; molecular studies of DNA, in the United States, France, and Denmark; and palynological (spore-and-pollen) and paleobotanical studies, at the Institute of Archaeology and Ethnography, Novosibirsk, and the University of Amsterdam, Netherlands.

It is expected that the new paleogenetic information obtained in DNA studies of the bison and horse mummies will provide solutions of some problems of their systematics. In the opinion of the prominent paleontologist K.K. Flerov (1977), the short-horned bison, inhabiting Northeastern Siberia at the end of the Late Pleistocene was none other than the modern Canadian wood bison, whom Flerov conferred the rank of a subspecies of the fossil bison. However, data obtained by many researchers of the morphology and genetics of the modern wood and plains bison indicate that they are two subspecies of the modern American bison. 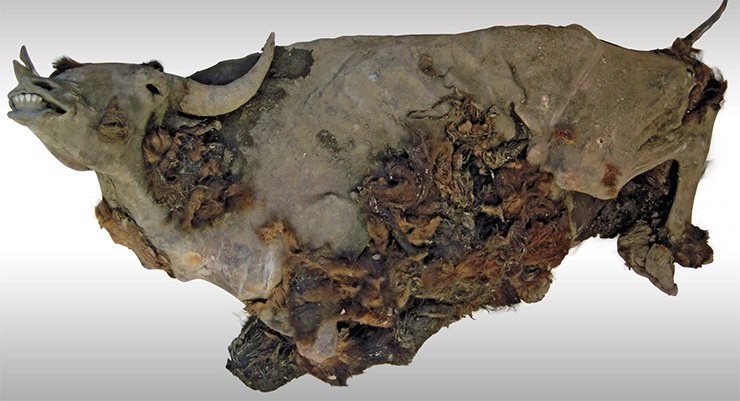 As for the horse, the Yakutian paleontologist P.A. Lazarev (1980) admitted that the northern and eastern races of the modern Yakutian domestic horse, not crossbred to other domestic varieties, were direct descendants of the Late Pleistocene Lena horse. This opinion seems to be supported by the fact that wild horses were hunted by natives in the lower reaches of the Kolyma River as late as the beginning of the 20th century (Pfizenmayer, 1939).

Nevertheless, it is still believed that these horses were feral, and the modern Yakutian horse is genetically close to some Central Asian varieties (Tikhonov et al., 1998). The morphological similarity of the ancient Lena and domestic Yakutian horses may have been caused by adaptation to the same harsh climate (Boeskorov, 2000).

At present, the facts show that Pleistocene wild horses existed in East Siberia 3—4 ka BP as few isolated populations (Kuznetsova et al., 2001; Boeskorov, 2004). Paleogenetic studies of the Yukaghir horse may clarify the origin of horses in the Far North of East Siberia, including the domestic Yakutian horse.

To sum up, the new findings are extensively investigated in several countries. Scientists expect that comprehensive data will be obtained by the end of the current year to get a detailed image of the paleoecology of these extinct species.