The Even society has always been soft-hearted towards kids, who are called “mother’s eyes” and “father’s soul.” Custom condemns cruel or brutal treatment of children, and parents never use corporal punishment or deprive their children of food. However, the Even kids do not live in “hothouse conditions:” they are given much more freedom than their peers in the West. Participating in all the family activities, they get to known the world on their own, and the adults help them acquire all the necessary skills and habits. Reindeer breeding is a traditional occupation of the Evens, and the Even children get easily used to the severe conditions of nomadic life, “trying on” the role of herdsmen and hunters. Already at the age of five they can sit steadily in the saddle and learn to catch reindeer with a heavy leather lasso-maut

Reindeer breeding is a traditional occupation of the Evens, for whom deer are the main food, labour power and vehicle. The Even children get easily used to the severe conditions of nomadic life. Since their early childhood, they begin to master the complex reindeer-breeding skills “trying on” the role of herdsmen and hunters: at the age of five they can sit steadily in the saddle and learn to catch reindeer with a heavy leather lasso-maut

It is the family that plays the leading part in the age-old traditional education. The Even society has always been soft-hearted towards kids, who were called “mother’s eyes” and “father’s soul.” Even small kids are treated with respect. If a kid is able to walk, people entering the dwelling shake hands with him. Custom condemns cruel or brutal treatment of children, and parents never use corporal punishment or deprive their children of food. 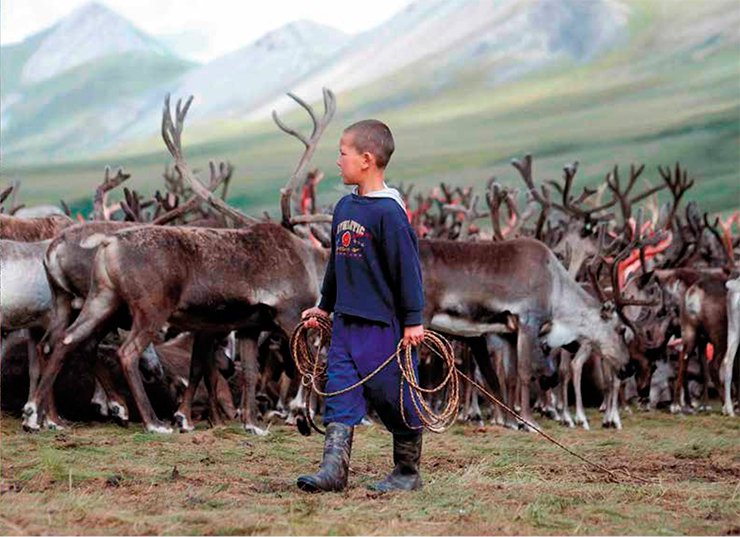 On the other hand, the Even kids do not live in “hothouse conditions”: they are given much more freedom than their peers in the West. Participating within their powers in all the family activities, they get to learn the world on their own, and the adults help them acquire all the necessary skills and habits. This is the only way to survive under the extreme conditions of the North.

The Even kids participate in everyday work from infancy. First, they only play mock “work,” imitating the adults. The boys fancy they are herdsmen roaming from place to place in search for pastures, leading reindeer to watering places. They use materials at hand to make toys: rose willow for reindeer figures and herdsman’s tackles and pieces of rope for a maut, a lasso to catch reindeer.

Since their early childhood, all the boys dream to learn to lasso a reindeer. Parents help their sons. They show them how to hold a maut correctly and how to throw it onto the reindeer’s horns or leg. The boys train their skills first lassoing the maut on some stationary subjects, such as horns, sticks, and stumps. Later they make their task more complicated and, screaming with laughter, lasso dogs and passers-by. The adults willingly take part in the game and give the kids helpful advice. 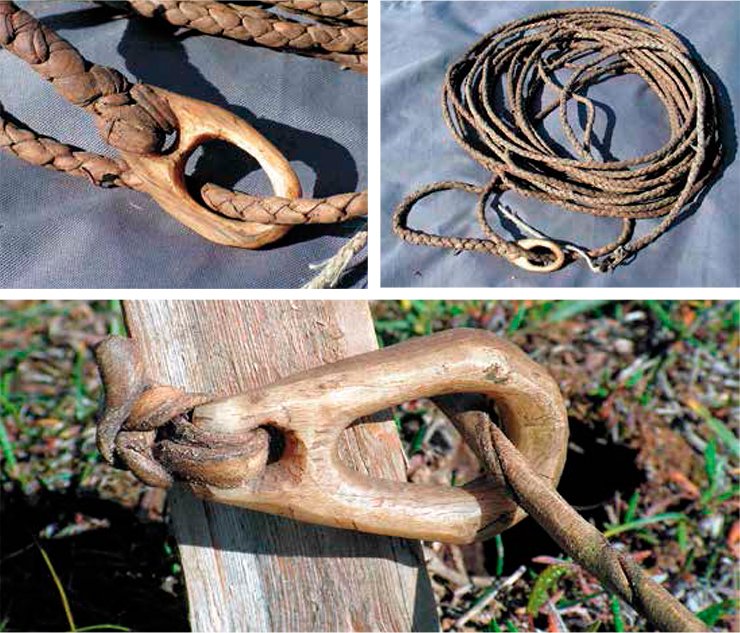 Little by little, the children drop make-belief and join real work, becoming full-fledged assistants for their parents. From the age of three, the boys help bring things to the skin tent, carry stones for the hearth, untie saddlebags and saddles. The children are taught hunting, and by the age of five they get their own bow and arrows. When the boys are twelve years old, they pasture reindeer like adults: at this age, each of them must be able to lasso reindeer and lay a fire in any weather.

The EVENS are one of the indigenous minorities of the North. They were previously known in the enthnographic literature as Tunguses, and later, as Lamuts. Their population is about 20,000. The Evens live mainly in the Sakha Republic (Yakutia), Khabarovsk Krai, and in the Magadan and Kamchatka Oblasts. Their main traditional occupations are nomadic reindeer raising, hunting, and fishing

With the exception of babies, all small Evens, together with the adults, roam from place to place, sitting astride reindeer. Long and hard journeys demand from the children maximum self-dependence: they have to be able not only to sit steadily in the saddle but also to control the reindeer. This is why kids are trained in riding from an early age.

The process of training usually lasts two or three months. First, the kid is tied to the saddle, with his mother accompanying and supporting him. Later, a long rein (5—6 meters long) is tied to the reindeer, and the child learns to sit in the saddle without any assistance. As soon as the child begins to realize how the animal behaves and learns to drive his “vehicle,” (s)he is allowed to ride on her/his own. 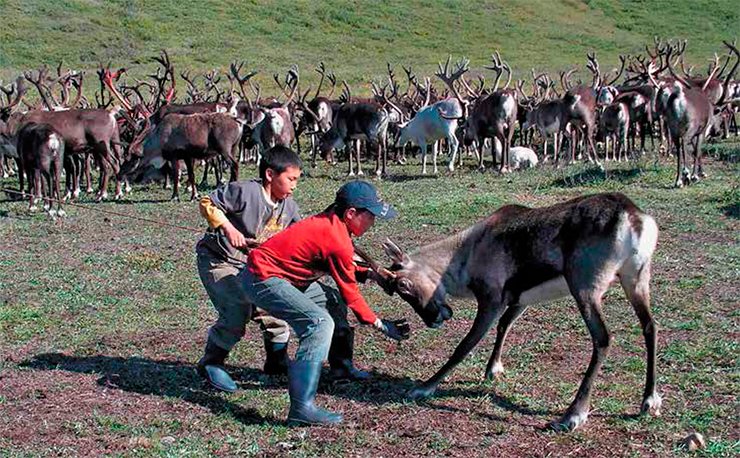 For small kids, special saddles khanka are made. They have wider and higher arches with thin boards attached to both sides. The child is fastened to the saddle with a special strap so that he can play sitting in the khanka. To transport kids, meek and calm reindeer are chosen.

Since childhood, an Even boy is taught to be self-dependent and is given much freedom.
According to our information provider V. Zakharov, before leaving home his parents put a kukhlyanka (fur anorak) on him, tied him tightly to the reindeer sledge so that he couldn’t fall down or run away, and bound a dog next to him for the child not to feel lonely.
Sometimes, when his parents were in, they would fasten a hand bell on his back and let him walk; the child could be found easily thanks to the bell, which played the role of a radiotransmitter.
A similar story was told by the well-known Even writer N.S. Tarabukin in his story My Childhood:
“There were rocks all around. And as I was laughing, the rocks were echoing and echoing. I didn’t know I was so far away from home…”
“I went to a clearing in the wood. The wood seemed to become darker and greener. I was in the bosom of the forest…”


When roaming with babies, the Evens carry them in special cradles bebe, which are balanced on the packsaddles by the saddlebags. The back of the cradle can be lifted, and the cot turns into an armchair. All the children of the family usually grow up in the same cradle, which is later given as a dowry to one of the daughters. 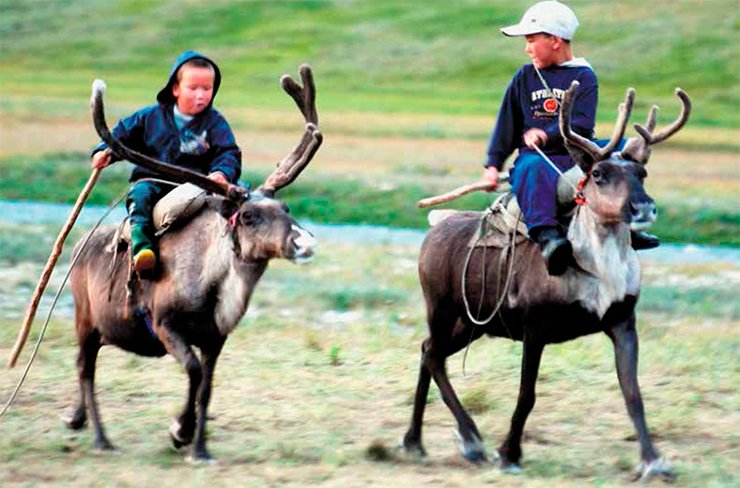 Today, the Evens pay much attention to the age-old traditional education of their young generation. They never force anything on their children, forbid them to do something, or punish them for being naughty. Instead, they guide and inspire the kids by personal example.

At the same time, the parents do their best to make the children grow up strong, hardy, capable of great effort, able to cope with any sort of work. They keep their family traditions and pass them on to the children – the family has always been of main value in the life of this nomadic people.

Photos are the courtesy of the author

Institute for Humanities and Problems of Minority Peoples of the North, SB RAS