Nowadays, when the human lifespan has considerably extended as compared with the previous centuries, cancer diseases are becoming one of the main mortality factors in the adult population cohort. The same is the situation in Russia, where cancer kills annually 186 men and 94 women per 100 000 population.

According to the World Health Organization, by 2020 cancer will have topped the world list of diagnosed diseases, leaving cardiovascular diseases behind. By 2030, the number of new diagnosed cancer cases may reach 27 million and the total number of cancer patients, 75 million people.

Currently, there are three approaches to treating cancer diseases: surgical intervention, chemotherapy, and radiotherapy. Unfortunately, these methods have considerable shortcomings. In the case of a surgically removed malignant tumor, a part or even the whole organ is lost. As for chemo- and radiotherapies, they are nonspecific and destroy not only damaged cells, but also healthy and active ones, which may cause most severe consequences for all the body. Thus, chemotherapy of a metastasizing cancer, when drugs with high antitumor activity are used, almost does not increase the lifespan of patients (Souhami and Tobias, 2009).

But the most important drawback is that very often these methods are not sufficiently effective, and metastatic tumor growth remains the main cause of death. That is why the most topical problem in this area is to design drugs that would destroy only the tumor cells, without damaging the healthy ones. The creation of such tools for cancer therapy requires fundamentally new approaches based on state-of-the-art knowledge about “the life and death” of the cells whose malignant transformation induces the growth of a primary tumor and its metastasizing.

From this standpoint, the ability to selectively induce the so-called apoptosis, the natural process of cell “suicide,” in cancer cells is an alluring prospect.

In the cross hairs of apoptosis

Several anticancer drugs capable of selectively inducing apoptosis in malignant tumor cells have already been designed and are used in clinical practice. Most of these drugs are based on a proinflammatory cytokine, human tumor necrosis factor-α, and its analogs. Unfortunately, the drugs involving these immune proteins also have serious side effects, which limits their employment. 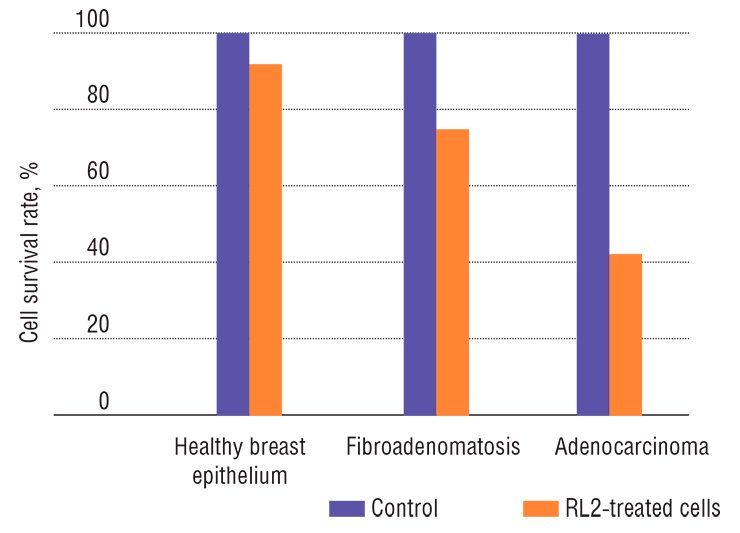 Apoptosis means “falling of leaves” in Ancient Greek. This figure of speech perfectly reflects the essence of this phenomenon: the multicellular organism gets rid of unwanted or flawed cells. In mammals, apoptosis plays an important part in maintaining the cell number and functionality in individual organs and tissues in both health and disease. In particular, approximately 50 to 70 billion cells die daily via apoptosis in an adult human body; this natural loss is refilled by the division of other cells in the body.
Apoptosis, a “civilized” cell death, should be distinguished from necrosis, an accidental cell death caused by external factors. In the process of programmed cell death, the cell itself “down-regulates” its activity; after its death the cell content is utilized by other cells. In the case of necrosis, an inflammatory process develops and the body is poisoned by cell decay products. The drugs used in cancer chemotherapy cause necrosis of tumor cells as well as of other cells


Recent experimental data suggest that certain substances contained in breast milk are able to stimulate selective apoptosis. For example, it appears that one of the milk proteins, α-lactalbumin, in combination with fatty acids induces apoptosis of mammalian cancer and embryonic cells in cell culture without any cytotoxic effect on healthy differentiated cells (Hakansson et al., 1995; Reed, 2003).

Human milk also contains cytokines that stimulate apoptosis, although not in an active state (Svensson et al., 2000; Srivastava et al., 1996). The fact is that apoptotic death of the cells secreting milk is part of a regular morphological rearrangement in the mammary gland after lactation stops. This process is influenced by exclusively local stimuli, since the factors able to suppress milk secretion and induce apoptosis of mammary cells accumulate or are activated directly in breast milk (Buescher et al., 1998). 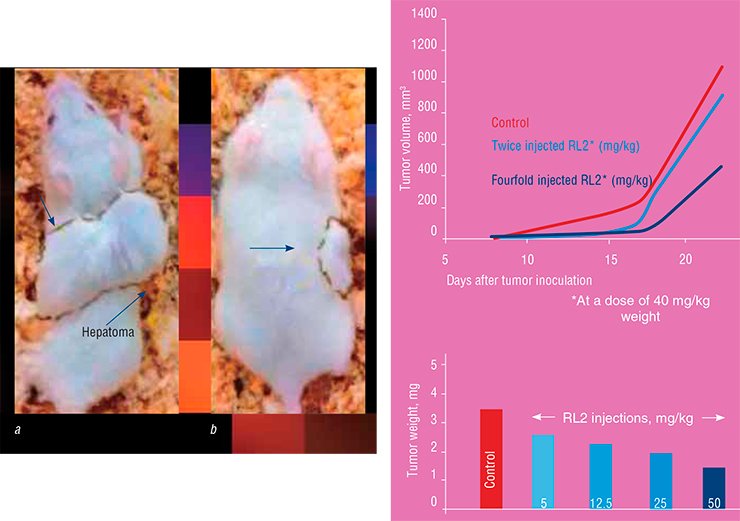 These data allowed the researchers to regard breast milk as a source for creating strictly selective, efficient, and safe tools for cancer therapy.

A team from the Institute of Chemical Biology and Fundamental Medicine, Siberian Branch, Russian Academy of Sciences (Novosibirsk, Russia) discovered a peptide in the human milk plasma that induced apoptosis of the cells of human breast adenocarcinoma (MCF-7), a standard tumor cell culture. Further studies have demonstrated that this peptide of 74 amino acid residues is a fragment of kappa-casein, one of the main human milk proteins.

The new protein got the name of lactaptin, which reflects both its origin and apoptotic properties. Genetic engineering methods led to the creation of several lactaptin structural analogs; then the most efficient analog useful for further work was selected. This peptide was named RL2. 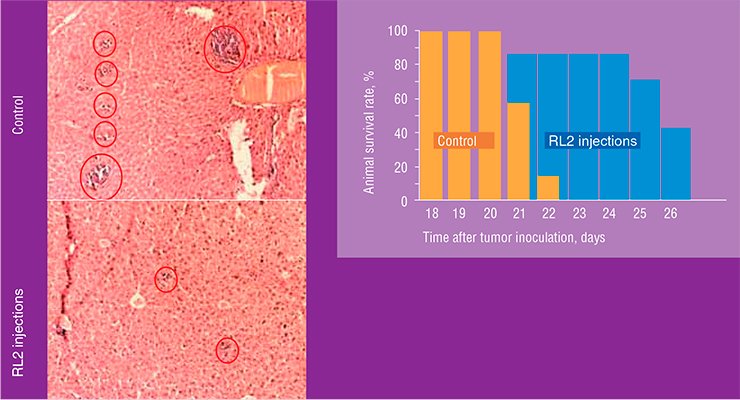 Various human cell lines have displayed different sensitivity to the cytotoxic effect of recombinant lactaptin. Note that human adenocarcinoma cells appeared to be the most sensitive, whereas undifferentiated stem cells isolated from the bone marrow almost did not respond to RL2.

Interestingly, the recombinant lactaptin, despite its “human” origin, is also able to induce apoptosis in some oncotransformed mouse cell lines. In the experiments with laboratory mice, RL2 application successfully prolonged the lifespan of the animals inoculated with the mouse HA-1 hepatoma. Characteristic of this cancer type are multiple metastases in the liver; however, their number was considerably reduced in the animals that received RL2.

By now, every last detail of apoptosis has been clarified, including a multitude of factors of various nature that trigger the programmed cell death. Manifold external and intracellular factors can stimulate apoptosis, but it can be initiated via only two mechanisms – a receptor-dependent or mitochondrial pathway.

In the former mechanism, the signal for apoptosis is received by the specialized proteins within the cell membrane, the so-called death receptors, with a subsequent chain of interactions involving ligand, receptor, adapter, and effector, which eventually leads to activating caspases, i.e. enzymes that cleave proteins. In the latter pathway, apoptosis is implemented by releasing apoptogenic proteins out of mitochondria into the cell cytoplasm through the breaks or pores in the mitochondrial membranes.

How does lactaptin act? Both markers of the receptor-dependent apoptotic pathway (for example, caspase-8) and an enzyme characteristic of the mitochondrial pathway (caspase-9) have been detected in the apoptotic cells treated with lactaptin. It has also been shown that lactaptin can efficiently enter the cell where it binds to cytoskeletal proteins, releasing special intracellular factors. This ultimately interferes with the integrity of mitochondrial membranes.

The antitumor drug RL2, a genetically engineered analog of the human milk protein lactaptin, elaborated by Russian researchers, is now at the stage of preclinical trials.

Photos are by the courtesy of the author