Clouds are the Forerunners of Earthquakes

The atmospheric clouds of meteorological nature have no clear line boundaries; it is hence understandable why linearly extensive banks of clouds found on the satellite images made in the beginning of the space era provoked interest of the scientific community in this phenomenon. A comparative analysis of the photos and maps of the earth’s crust faults has shown that the cloud anomalies were related with the geological structure, namely with the faults of the earth’s crust. Though the nature of the unusual phenomenon is not clear yet, the information accumulated allows of practical applications, namely, indicating seismically active regions

In the first half of the 20th century, French geologist A. Schlumberger, doing field studies in the Alps, and outstanding Russian geologists I. V. and D. I. Mushketovy, working in Central Asia, discovered cloud banks not be blown away by the airstream which were formed over the earth’s crust faults.

Though there was no convincing explanation of the physical principles underlying this phenomenon, it later (in the 1970s) found wide use in space geology. On the images of the Earth taken from the outer space, the cloud boundaries were sufficiently clear to carry out a mapping of faults in the shelf zones of the continents. The famous geologist P. V. Florensky used the images of cloud banks to find petroleum regions in the mid-Volga Region and on the peninsula of Mangyshlak in the Caspian Sea.

Satellite observations revealed that linear clouds can be several hundred and even thousand kilometers long. Another natural phenomenon was discovered shortly, commensurable in its meaning with the former but opposite in its nature – thinning out of clouds over faults (Morozova, 1980). The latter phenomenon can show in two ways: either as a narrow cloud gap (canyon) in a continuous cloud cover or by forming a clear-cut fixed linear border of a cloud massive coming over a fault. Linear cloud anomalies (LCA) is a common name given to these three types of unusual cloudiness. 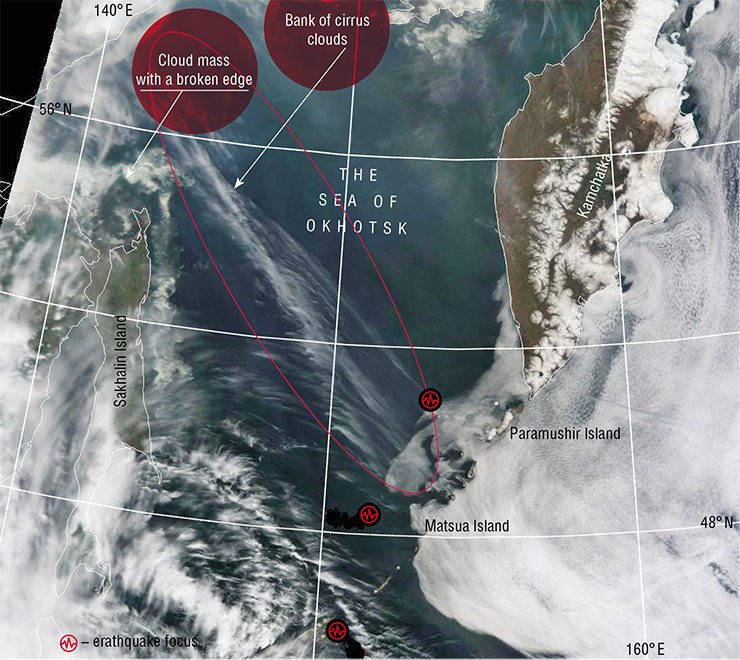 On the one hand, this phenomenon obviously cannot be caused by the atmospheric processes alone, since LCA are connected with the geology of a locality: they copy the configuration of the earth’s crust faults. On the other hand, there exist a great many faults, while only some of them are reflected in cloudiness: appearing and vanishing from time to time, they live for some minutes or several hours, or sometimes even for longer than a day. According to Academician F. A. Letnikov (2002) from the Institute of the Earth Crust SB RAS, the reason for this is that faults influence the atmosphere only in the periods of their tectonic and energetic activity.

In other words, linear cloud anomalies are of lithospheric nature, and their advent signalizes an activation of geodynamic processes. Such processes are often followed by an earthquake. Hence, LCA monitoring is yet another way to forecast a coming disaster.

From the time when the wide scientific community got access to meteorological satellite images (for example, on the Russian Federal Space Agency site) up to now, enough information has been accumulated to establish a correlation between a forthcoming earthquake and a certain cloud condition. Thus, it was found that a swarm of LCA emerges a few hours (or sometimes one or two days) before an earthquake (Morozova, 2008).

It can happen that in the same image both banks and canyons appear over different faults or over different parts of the same fault. Evidently, geodynamic activity can lead both to cloud generation and cloud degradation depending on the condition of the atmosphere. 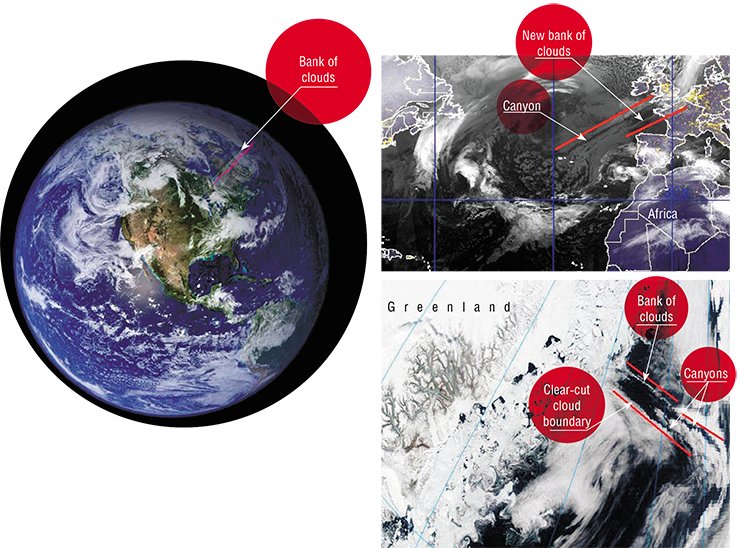 Dynamics of cloud disruption by an emission from a fault can be illustrated by the photos of the cyclone coming from the continent to a seismically active region, which occurred in March 2011 off the Japanese coast. While the cyclone was out of that area, its vortex cloud field had a typical round shape with a fuzzy edge. As the cyclone was moving towards the seismic zone and came to be affected by the emission from the linear fault of the earth crust, a vertical wall, depicted in the image as a sharp linear boundary of cloudiness, rose in the cloud field of the cyclone.

Apart from the LCA caused by lithospheric faults, forerunners of earthquakes can be cloud ranges of non-atmospheric nature appearing at the seismic center before a shock. They are supposed to result from fluid emission from the earth interior. These “earthquake clouds” tend to emerge before a shock and after it and keep their position in space as long as several hours or several days. For example, during the disastrous earthquake that occurred in China on May 12, 2008 a short bank of such clouds appeared a day before the first shock over an active fault near the epicenter and could be observed for over a month which was a sign of an increased seismic activity. 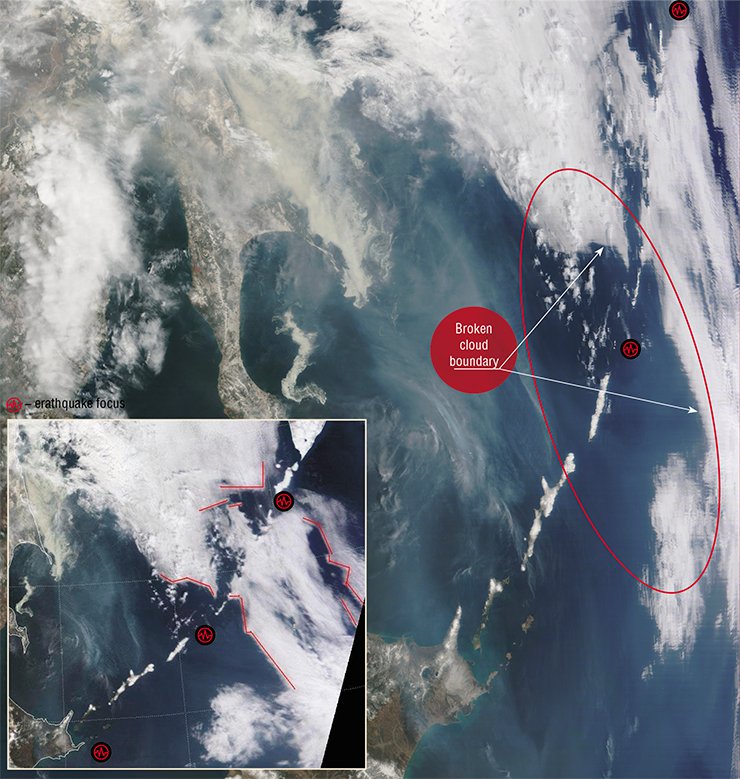 Anomalous cloud phenomena can also appear as a result of technogenic earthquakes: inducing seismicity initiates fault activation; faults hence become sources of intense emission. For instance, immediately after an underground nuclear explosion, LCA were observed near this area; they continually vanished and emerged over the following two weeks. During nuclear weapon tests in North Korea, LCA appeared mainly over the faults of the sea bed in the blast effect areas. Importantly, launching a ballistic missile equals to a small nuclear explosion, as far as the effect on the earth’s crust is concerned. 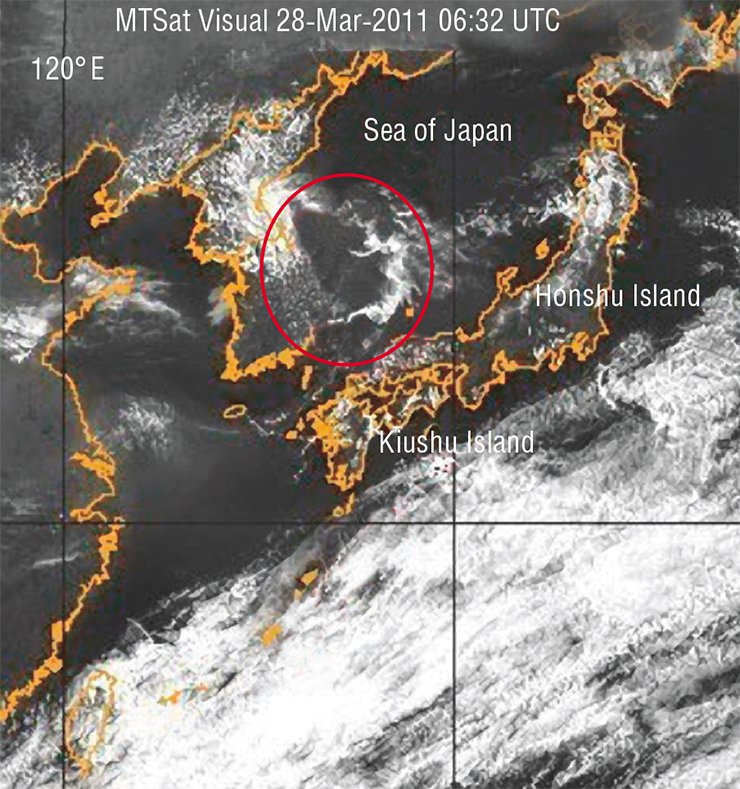 In this manner, LCA satellite monitoring allows of global monitoring of powerful weapon tests at their sites, even when the weather is cloudy. Such monitoring is optimal because it is informative, ecologically safe and cost-effective. 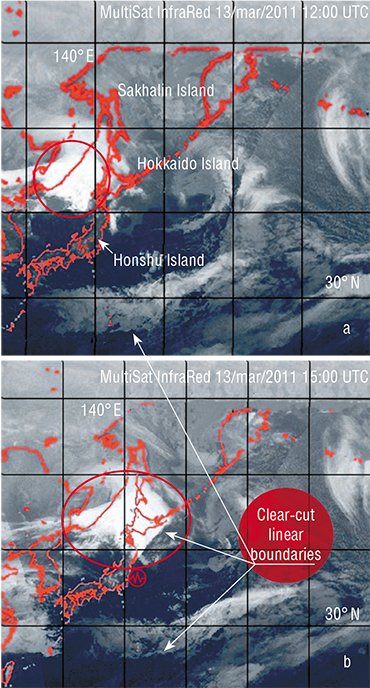 Mountain ranges and rock masses create noticeable distortions in airstream distribution and cloudiness. Due to relief heterogeneity on the lee-side of ridges, parallel banks of clouds emerge. In meteorology, this phenomenon is known as orographic cloudiness. As an airstream crosses a mountain range, waves form on its lee-side. Within upward cold streams of these waves, banks of clouds arise, while in the warm downward streams cloudless spots originate. The same waves appear in the atmosphere behind islands in the ocean and can be easily seen on the satellite images.

If orographic clouds spread along an airstream in the same direction, banks of seismic clouds overlap, making a mesh. A similar configuration of cloud fields occurred near the Kuril Islands during the recent disastrous earthquake in Japan; this phenomenon cannot derive from an orographic influence or from a temperature inhomogeneity over the water surface. This configuration remained in place no longer than two hours, after which the mesh was replaced by latitude-oriented cloud stripes, stretching along the geographical parallel, from west to east. Such a rapid change in the atmosphere was probably attributable to the high power of the lithospheric processes.

On August 23, 2011, a major earthquake occurred in Virginia, USA, 140 km away from the national capital. Two types of cloud forerunners that appeared a day before the first underground shock could be treated as a sign of the forthcoming accident. Over the earthquake region, wider cloudless canyons emerged against the background of the cloud stripe mesh. Moreover, at the same time LCA could be observed as far as hundreds of kilometers away from that region, over the Atlantic Ocean – notably, the epicenter of the earthquake was located on the continuation of a land projection of one of these anomalies. 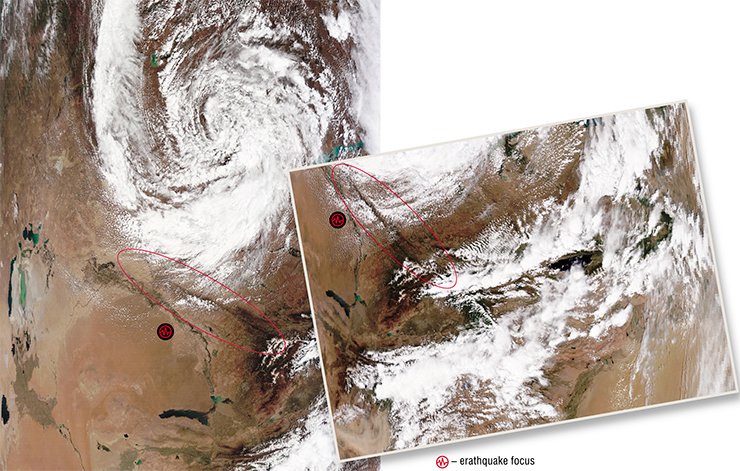 The appearance of the two types of cloud anomalies can be interpreted as a short-term forerunner of an earthquake that can happen in a region. Statistical data analysis has showed that the probability of a seismic event taking place after such a sign is 77 %. 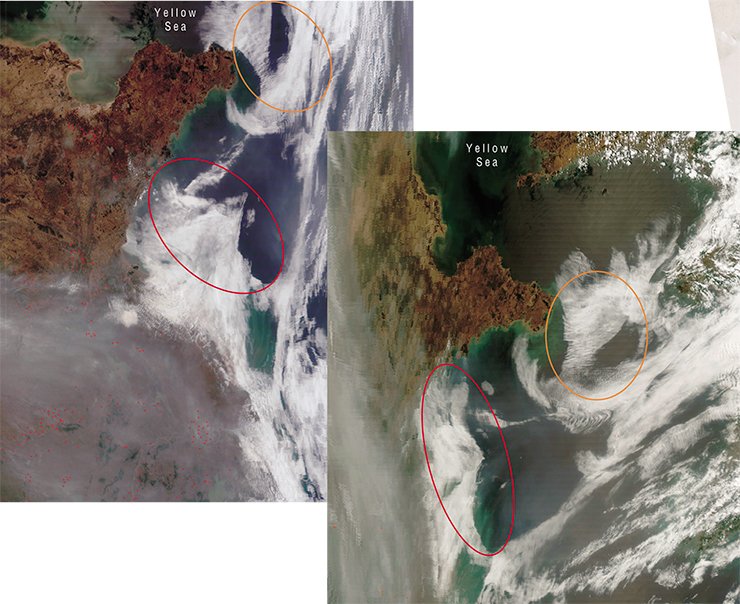 The territory (or the water area) influenced by seismic process can be immense. Hence, it is possible to make a reliable forecast of a major earthquake only in the regions equipped with a system of continuous monitoring of forerunners, simultaneously covering an area with a minimum radius of 500 kilometers. Regretfully, the existing geophysical monitoring nets can only cover about one-tenth of this area. At the same time, the radio coverage zone of a satellite center is many thousand kilometers, which is why LCA satellite monitoring seems to be the most appropriate tool to survey global seismic activity. The distant sounding of the Earth from satellite orbits produces sufficiently accurate data of the atmosphere parameters, in particular, the vertical and horizontal dimensions of cloud masses. This suffices to produce a correct idea of the global and local changes in the atmosphere-lithosphere system in various time and spatial scales. 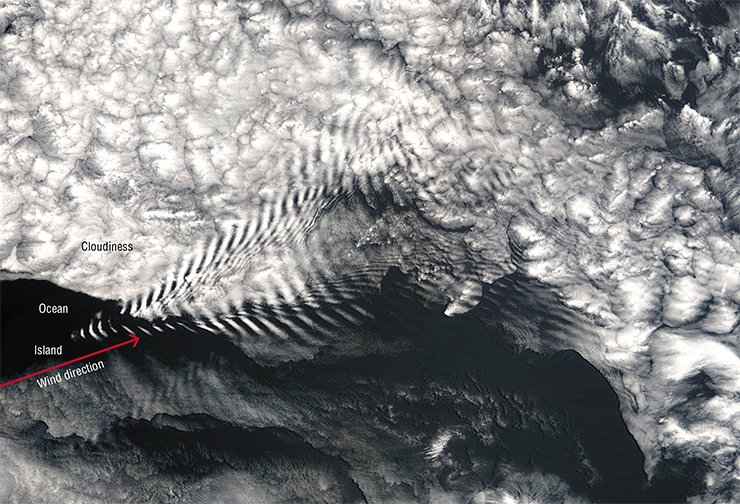 On gridded satellite images, LCA dislocation allows us to determine the geographical position of seismically active faults. Its changes with time make it possible to estimate the direction and propagation velocity of the stresses in the earth’s crust, both locally and globally. Small-scale images taken from high-orbit satellites show an area covering several tectonic plates, which allows of tracing their interaction.

Luckily, the existing global satellite system supplying data for weather forecast can successfully perform seismic monitoring. Regulations of the orbital cloud-cover observations are convenient for LCA prompt recording. Data from satellites come on-line, data processing rate is quite high – therefore, the result can be received in a matter of minutes. 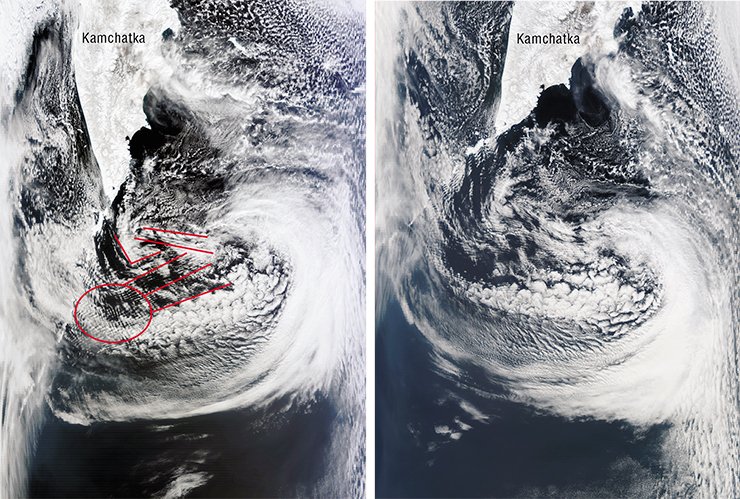 An analysis of the Earth’s satellite images can provide information on the processes occurring in Earth’s spheres within a wide time and spatial spans. Thus, small-scale images from the satellites flying around the planet at distant circular orbits are distinguished by the field of view.

Such photos enable us to analyze the atmosphere dynamics and lithosphere processes connected with it over an immense territory. Several dozens of geostationary satellites can transmit images from the orbit 36,000 km above the Earth of any place at the Earth’s surface at hour or half-hour intervals. Large-scale photographs from the satellites Terra and Aqua are currently used to map small, local LCA and to study the types of clouds constituting LCA. 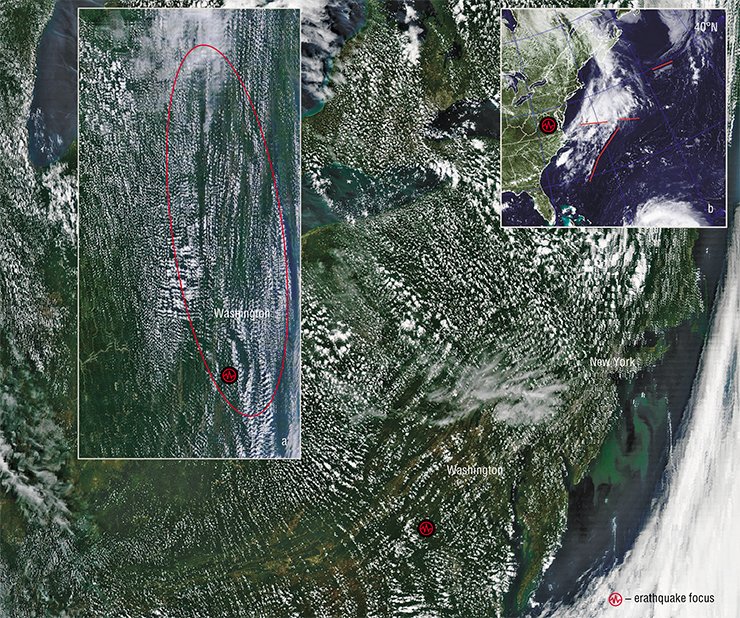 Unfortunately, LCA satellite monitoring can reliably predict only the region and the time of the beginning of an earthquake (accurate to a day). In order to determine the exact location of the earthquake epicenter, complementary methods are needed. The immediate goal is to organize the synchronous recording and coprocessing of LCA and seismic fields with a view to improving the earthquake forecasting methods.

Since remote areas and water areas occupy a large part of Russia, further development of the satellite methods for natural phenomena and disasters monitoring is a crucial task of today’s science. Further research into the discovered atmosphere geoindicator of seismic processes will bring practical benefit and expand knowledge about the nature of this phenomenon. The development of a new scientific field will allow us to open a new page in the study of seismicity, fault tectonics, and in the ecological monitoring of underground nuclear explosions.