Volcanic glass is among the most interesting geologic objects. Its investigation adds to the understanding of the nascence of effusive rocks in the Earth’s bowels. In addition, the broad use of obsidian tools by the ancient population of the Russian Far East motivates interdisciplinary studies of the major sources of obsidian in ancient cultures of the region and prehistoric routes of its transportation and exchange

Both commonly known porous pumice and semiprecious obsidian belong to the group of unusual effusive rocks and minerals collectively named volcanic glass. These messengers from the Earth’s interior are “quick-frozen” melts, which are similar to a liquid in lacking regular positions of atomic groups, inherent in crystalline substances. Owing to this amorphism, natural glasses, first of all, obsidian, can be readily fractured into thin chips with sharp edges. 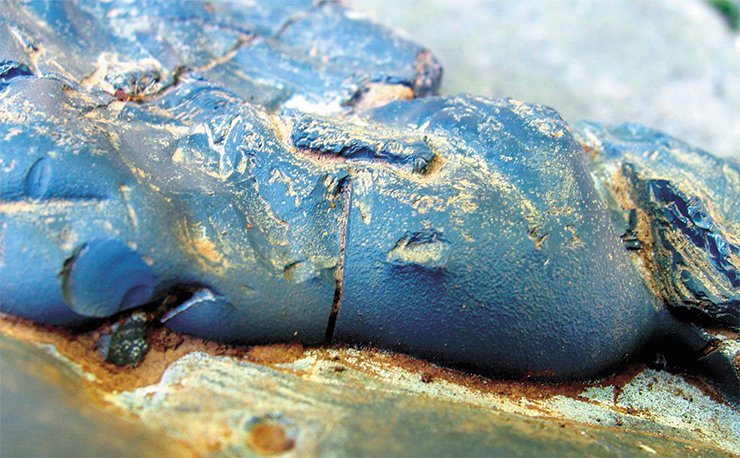 Vitreous rocks form in rapidly cooling magmatic melts during volcano eruptions. The rate of cooling (and, correspondingly, solidification) depends on magma viscosity, which, in turn, is determined by its chemical composition, primarily the contents of silica (SiO2) and volatiles (H2О, HCl, СО2, etc.)
Water-free acidic viscous magmas rich in silica rapidly vitrify during supercooling and produce “acidic glasses”: obsidians and perlites. They are the most common in the nature. Lava flows and ash–pumice deposits consist entirely of such glasses. Alkaline basaltic lavas, poor in silica, are more fluid. Their cooling produces superficial chill crusts rather than entirely glassy blocks and only if the lava is cooled rapidly by effusing into water or intruding into a glacier.
In any case, matter exchange between the vitrified material and the environment is insignificant. Therefore, volcanic glasses provide the most adequate information on the composition of the original magmatic melt. This allows numerous obsidian samples to be classified into distinct geochemical groups. Several classification approaches based on the contents of minor elements (rare earths, the Hf-Rb-Ta association, etc.) have been developed. The community of a group reliably points to the origin of a sample from the corresponding provenance


People utilized the processability of “glass stones” as early as the Paleolithic. Obsidian was the most popular material for manufacturing bladed tools: scrapers, knives, arrowheads, and spearheads. Later is was used for making finery, sacral figurines, pendants, and even stone mirrors. It is not surprising that obsidian artifacts are not uncommon in many Paleolithic sites in volcanic regions.

These unique collections of volcanic glass samples produced by early people are of great interest for geologists. Furthermore, geological and geochemical studies of these prehistoric objects can provide information not available by common archeological methods of typological analysis. For example, they can add to the understanding of migration routes, ways of material exchange, and territorial ranges and timing of historic events. 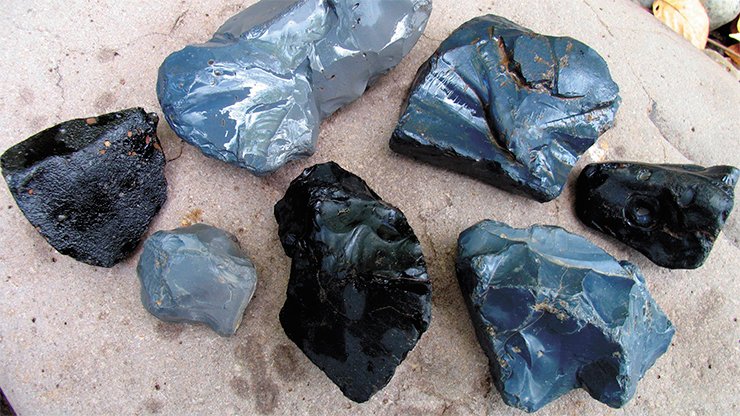 Such studies have been conducted for fifty years in the Mediterranean countries, North America, Mesoamerica, Japan, and the Near East. In Russia, the region richest in obsidian is the Russian Far East. The earliest information of this sort on its ancient cultures was obtained in the late 1990s (Kuzmin, Popov (Eds.), 2000). Those studies were conducted by an informal group of geologists, archeologists, paleogeographers, and physicochemists of the Institute of Geology and Mineralogy (Novosibirsk), Far East Geological Institute (Vladivostok), University of Missouri (Columbia, United States), and Institute of Geochemistry (Irkutsk).

“Archeological” obsidian in the continental Far East is represented by volcanic glasses hyalomelanes. Their provenances are bedrock exposures occurring on two plateaux: Shkotovo in the southern Primorsky Krai and Obluch’e in the middle reaches of the Amur River. There, volcanic glass forms chill zones of pillow lavas and their fragments, which arose about 12—22 Ma BP. Their degradation gives rise to numerous fragments, which can be dragged by water flows and sedimented in fluvial deposits to form secondary sources. 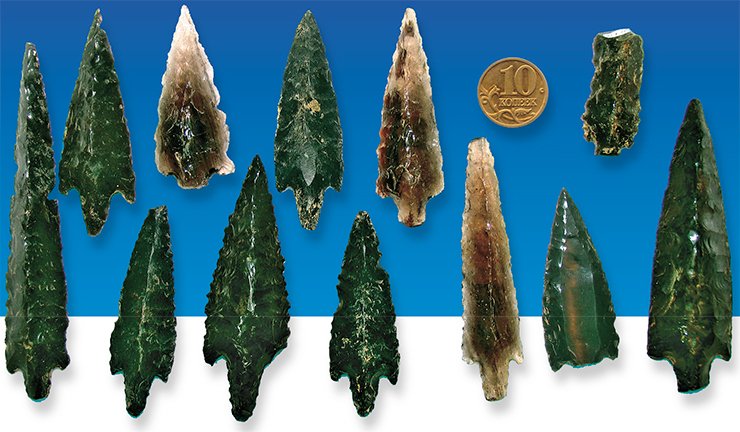 Volcanic glass pebbles are a common component of bed material in rivers of the Shkotovo plateau. There, as in old times, one can pick a splendid collection of “glassy” samples. In contrast, the swamped river floodplains of Obluch’e and absence of shingle banks even within the basaltic cover resulted in the scarcity of this obsidian in the archeological sites of the Amur region.

Pillow lavas and hyaloclastites, which are the main sources of basaltic obsidians, are formed by effusion of basaltic melt to water or a glacier. They always accompany each other.

Pillow lava effused to water forms round pillow-shaped bodies forced into each other.
Hyaloclastite is formed by the fragmentation of lava. It consists of sharply angular volcanic glass (hyalomelane) fragments and devitrified minerals.
Extant volcanoes are unique natural labs. They present a complete picture of the formation of pillow lavas and hyaloclastites in past geologic epochs.
Presently, such processes occur on Kilauea volcano (Hawaii, United States). Basaltic lava flows reach there the open sea. A subglacial eruption of Eyjafjallajökul volcano (Iceland) occurred relatively recently, in the spring of 2010

However, objects made of obsidian with a chemical composition unusual for the region have been found in the southern Primorsky Krai (Popov et al., 2005). This glass is geologically younger than 2 Ma, but obsidian formation in the local provenances had ceased by that time. The origin of the unique samples was discerned owing to an event that occurred 37 years ago. It was related to Paektu Mountain, the only volcano in continental Eastern Asia that erupted in historical times. 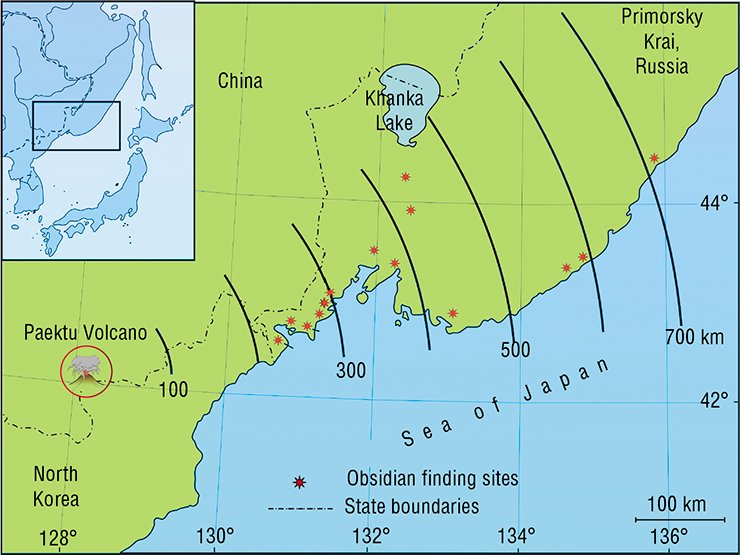 Paektu is located 200 km off the southernmost point of the Russian Far East, at the China/North Korea border. As reported by North Korean geologists, numerous outcrops of obsidian rocks formed just 0.6—2.2 Ma BP occur on the southern slopes of Paektu Mountain (Popov et al., 2005). However, the political situation allowed Russian scientists to visit but the northern (Chinese) side of the volcano. Fortunately, two obsidian samples from Paektu, donated by North Korean archeologists to Professor Okladnikov, who visited North Korea in 1974, are kept at the Institute of Archeology and Ethnography, Novosibirsk.

Their study has shown that the Korean obsidian artifacts belong to the same geochemical group as some tools from the southern Primorsky Krai. Surprisingly, volcanic glass fragments from the Chinese slope of the volcano differ in chemical composition from the Korean obsidian, and Chinese volcanic glasses were poorly suitable for Stone Age industry (Popov et al., 2005). Thus, at present the hypothesis of Paektu as the mother body of Primorsky archeological obsidian can be neither proven nor discarded. We hope that the riddle will be solved in the years to come.

Kamchatka is a Mecca for volcanic glass students: geologic survey has discovered there about thirty high-quality obsidian exposures. Some samples can be used for jewelry. The most prominent site is the Itkavayam deposit in the northern part of the Central Range. It is a 200-m thick lava flow from Obsidianovyi volcano. Other examples are ornamental obsidians from Lake Palana and the Chasha maar in Tolmachev Dol.

Over 400 Kamchatka obsidian samples have been obtained from native sources and archeological sites. The samples were classified into 16 geochemical groups differing in rare earth composition (Grebennikov et al., 2010). By now, obsidians from only six known native sources of stony materials for early people have been identified unambiguously. The two most illustrative ones are Payalpan and Itkavayam, located in the northern part of the Central Range. These obsidian sources are associated with a number of archeological sites, some of which are up to 560 km distant. 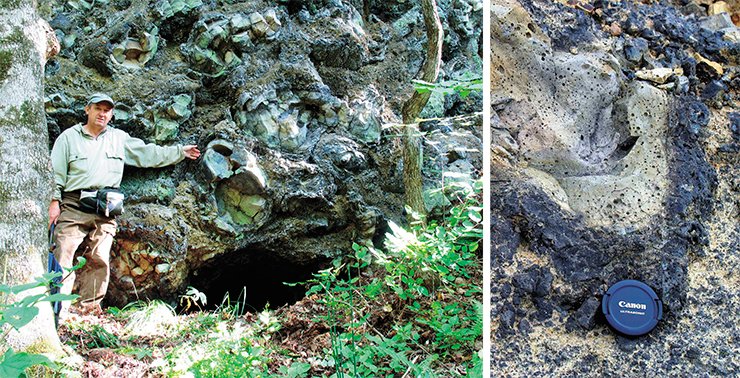 Seven geochemical groups include only archeological samples; hence, their provenances remain undiscovered. This is not surprising as even some known primary obsidian deposits have been investigated insufficiently because of their poor accessibility. It is particularly true for volcanoes of the Central Range, which are located hundreds of kilometers away from roads and populated sites.

Nevertheless, the analysis of minor elements in Kamchatka obsidians reveals their latitudinal zoning from the coast of the Sea of Okhotsk to the Pacific. It is explained by the fact that “acidic” volcanic glasses of the Central Range, East Kamchatka volcanic belt, and Southern Kamchatka inherit chemical features of associated basalts. This allows prediction of new obsidian sources for each of the seven “archeological” groups and makes future studies of Kamchatka volcanic glasses more expedient. 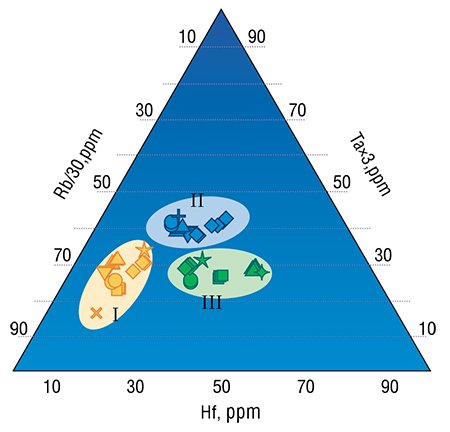 The long-lasting cooperation of geologists and archeologists has shown that people started the development of volcanic glass sources in the Russian Far East as early as the Paleolithic, at least 19 ka BP in Sakhalin and about 12 ka in Kamchatka, present Primorsky Krai, and the Amur region. Interestingly, the early people often used obsidian not only from the nearest source but also from three to seven volcanic glass exposures, sometimes hundreds of kilometers apart (Kuzmin et al., 2008).

We also revealed some features of the early people migrations associated with the production and exchange of the valuable stony material. For example, obsidian trade between Hokkaido and Sakhalin Islands started when the sea level was 100—120 m below the present one, and La Pérouse Strait did not exist. However, in later times (10—11 ka BP), when the strait was as wide as 40 km, obsidian was still delivered from Hokkaido to Sakhalin, as evidenced by the presence of obsidian in archeological sites of the time.

Another example is Japanese obsidian that was delivered from a source on Kyushu Island to Korea about 25 ka BP. At that time, a 20-km wide strait separated the island from the continent. About 4 ka BP, Kyushu obsidian was brought to Okinawa Island and farther south. Hence, water routes were even longer. These facts argue for the hypothesis that early people of the region had crafts for crossing water barriers.

Thus, it is safe to state that a number of logistics networks existed in Northeastern Asia even in the Paleolithic, 10—24 ka BP. Obsidian was delivered, either directly or through factoring, from provenances to the sites of processing. The length of these trade routes constantly increased and reached in the Neolithic, 3—10 ka BP, one thousand kilometers and more .

The photos in the article are by courtesy of the authors