News from the Fields

Last summer, the Russian-Mongolian archaeological expedition, which had been excavating, for several field seasons, the famous Xiongnu burial of Noin-Ula in Northern Mongolia, continued work. The 11th tumulus, having no analogues among the previously studied Xiongnu kurgans, sprang a surprise on the archaeologists

Prior to the excavations, the 11th Noin-Ula tumulus looked like a typical Xiongnu grave. It was an earth hill, rectangular in shape, surrounded by a 15 × 13 meter fence made of grassy stones. In the center was a big funnel, also “traditional” for Xiongnu burials evidence left by ancient grave-robbers. Running southward from the southern wall of the fence was a chain of stones marking dromos, a narrow short corridor leading to the burial pit entrance. This southward beam, pointing to the summer Sun in zenith and to the Moon rising over the mountain, is a crucial part of Xiongnu burials. 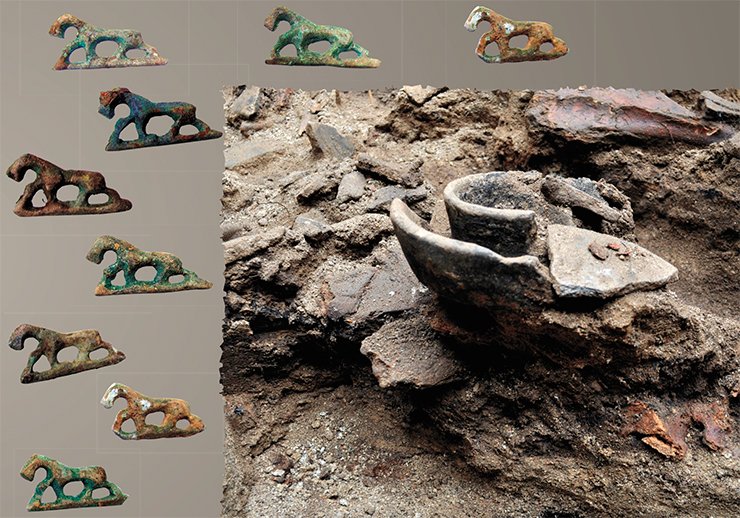 And yet, the archaeologists noticed at once something peculiar: going along the earth hill was a trench; no previously studied Xiongnu burials had had this construction feature. As it was found out later, the yellow clay from the trench had been used to make the burial hill. As a rule, however, the earth dug from the burial pit had been enough to cover the grave and to make a big burial hill, as prescribed by the rituals. This had not been the case with this tumulus: the amount of the earth excavated from the burial pit was evidently insufficient, and the builders had to dig a trench to get more earth. The reason for this became clear during the excavations. 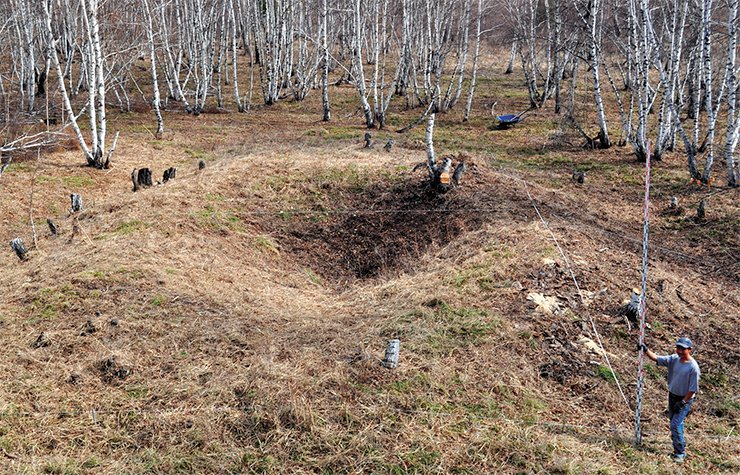 Leading to the burial were five narrow steps going about 1.5 meters deep. Further on, in a layer of sand, was a 4-meter-deep shaft with steep walls. Absent from the burial pit were additional details normally present in large tumuli such as a wooden log construction, and a stone or wooden ceiling. 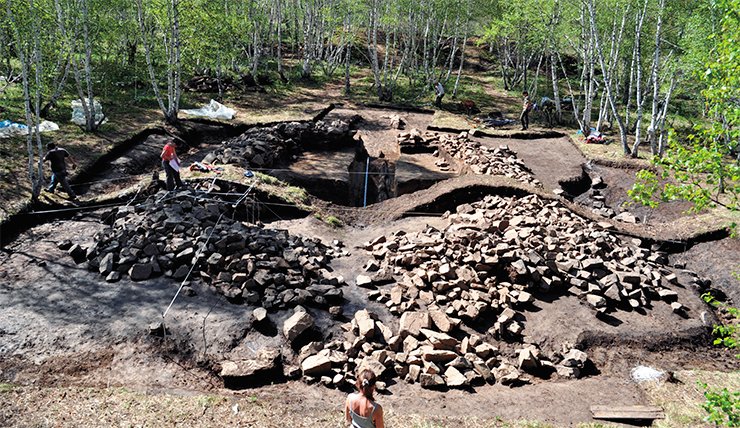 As it was anticipated, the burial had been looted: at the burial pit bottom, covered with a decomposed wooden floor and remains of scattered green foxtail or millet grains, were broken ceramic vessels, a long dry stick, and a fragment of an artifact made of white nephrite, the most valuable in China. Most importantly, however, there was something there that for archaeologists is more precious than any treasure – the skeleton bones and broken skull of the buried.

This was a great piece of luck because at Noin-Ula anthropological material is extraordinarily rare. For example, in the 20th tumulus, previously excavated by the expedition, only a few teeth of the woman who had been buried there were discovered. As a rule, the ancient robbers, who got inside the burial through a narrow pit, brought the human remains outside, and they were lost. Therefore, we can only guess who was buried in the fourteen Noin-Ula tumuli investigated so far. The 11th tumulus is probably the first of which it can be said with certainty to whom it belonged. 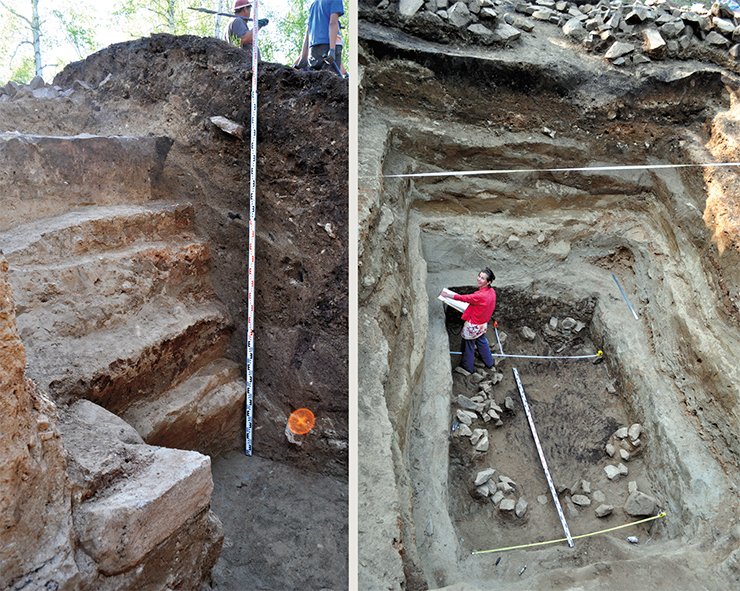 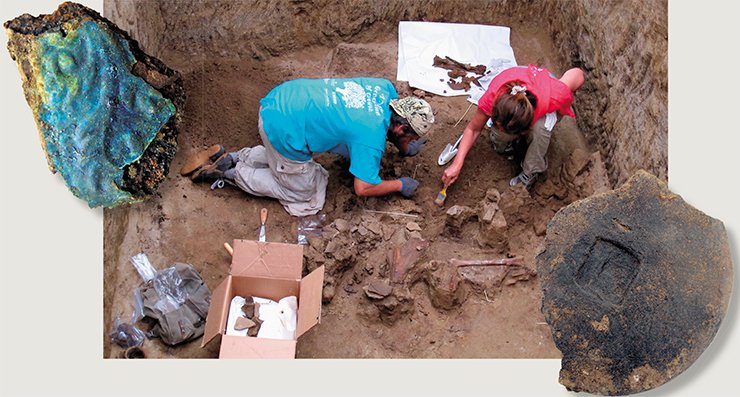 As it appeared, buried in it was a young girl, 16 to 18 years old (as found by Doctor of History T. A. Chikisheva). Was this discovery a surprise for the researchers? The role of women in nomadic communities can hardly be overestimated. According to the well-known Russian historian A. V. Golovnev, “the women were not taken into consideration in the count of an ulus population, but the richness and, if I may say so, the happiness of a nomad was measured in women. The cult of possessing women was so explicit that the oath administered to the khan began with the promise to drive to him beautiful girls and women...” (2009, p. 394). Therefore, well-born women were usually buried with as much luxury as men. 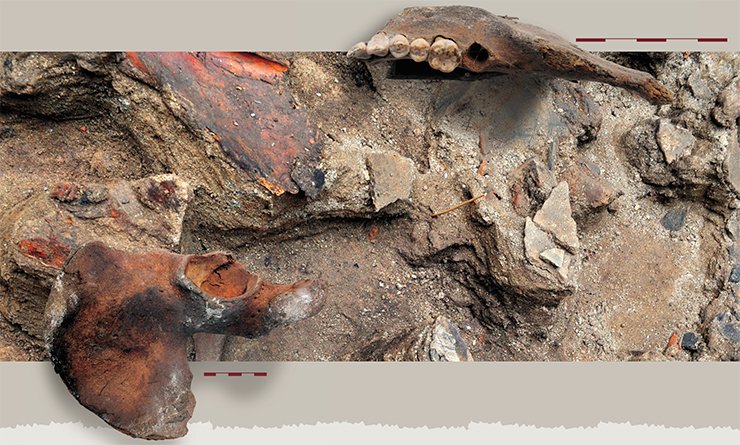 However, the girl was so young that she had hardly managed to occupy the high place in the society she could have probably claimed by birth. Possibly, this fact accounts for the “peculiarities” of this tumulus: a too small and shallow grave for a highly-placed Xiongnu and the imitation of a big structure on the top. In other words, the specific features of the burial ritual indicate, on the one hand, the comparatively low social status of the dead woman and, on the other hand, the high place and importance of the family she belonged to.

Among the bones of the buried, twelve little bronze horses were discovered. Attached to some of the figurines were pieces of leather and fur; the horses were sewn on to them using woolen thread. Similar “trotting” bronze horses have been found in other Xiongnu tumuli. Three similar copies were discovered in Zabaikalie (Trans-Baikal district), Ilmova pad (Konovalov, 2008), and another six were dug out at Noin-Ula. These horses, used as fur coat ornaments, are of great value because they represent artifacts made by the Xiongnu themselves, which is exceptionally rare. 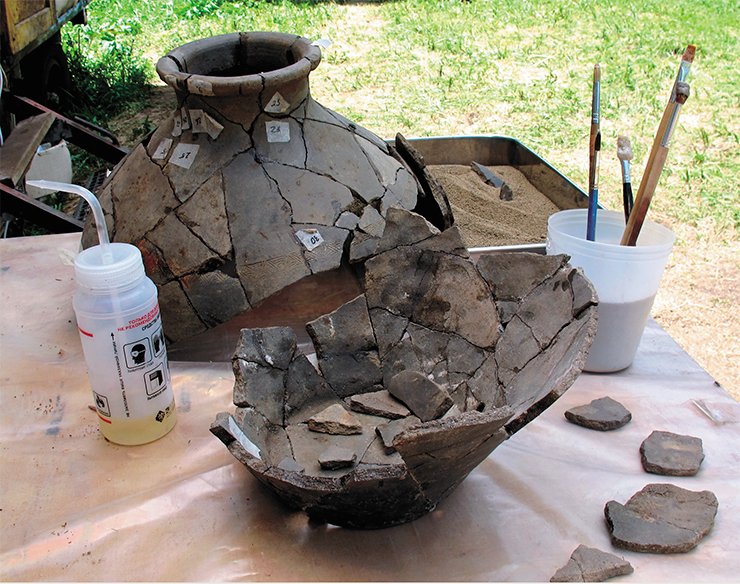 We can find out more about the young girl buried in the 11th Noin-Ula tumulus with the help of genetic analysis of her remains. Further examinations of the archaeological finds will be conducted in laboratories. Also, the researchers are looking forward to discovering what was held in the ceramic vessels found in the burial pit interior, as some traces of their former content are in place.

Photos used in the publication are the courtesy of L. Kundo, Ye. Bogdanov, N. Polosmak, and R. Ibragimova (Institute of Archaeology and Ethnography SB RAS, Novosibirsk). The drafts were made by N. Sutiagina (Institute for the History of Material Culture, Russian Academy of Sciences, St Petersburg)