Not All Gold Glitters

From the earliest times, this precious metal has been used not only for making adornments but also as a universal money equivalent. Presently, it finds applications in electronic and electrical engineering, pharmacy, catalysis, ultrahigh vacuum technologies, and as a target in nuclear research. Everyone knows how gold nuggets look. However, not so many folks know that gold–silver ores contain, in addition to free gold, inconspicuous gold and silver sulfides: uytenbogaardtite and petrovskaite. These unusual minerals were discovered several decades ago, and it is conceivable that their contents in ores are comparable with native gold reserves

Gold in the form of nuggets of various sizes has attracted attention throughout the history of humanity starting from the Neolithic. It is extensively sought at present as well, but most of the gold that blisters and that can be seen by the naked eye has already been produced.

However, numerous new gold minerals have been discovered, including gold–silver sulfides. It is pertinent to mention that nobody sought them purposively. They were found owing to His Majesty Chance and a certain portion of luck.

Over thirty years ago, the microprobe analysis of native gold from the ores of the Maikain Mine in Kazakhstan embraced the mineral envelope covering it. Its comprehensive study revealed, in addition to gold and silver, stable sulfur concentrations. The new mineral was named petrovskaite after Professor N. V. Petrovskaya, a prominent student of the mineralogy and genesis of gold ore deposits (Nesterenko et al., 1984). A little earlier, another mineral was detected in the deposits Tambang Sawah (Indonesia), Comstock (United States), and Zmeinogorsk (Russia) and named uytenbogaardtite after Professor Uytenbogaardt, Netherlands (Barton et al., 1978).

The two minerals are not simple but complex metal sulfides. They contain both gold and silver. Petrovskaite (AgAuS) contains more gold (58.5 wt.%), and uytenbogaardtite (Ag3AuS2), less (33.7 %).

In the late 1970s, a new mineral close in composition to Ag3AuS2 was discovered in China. It was named liujinyinite. The name was composed from Chinese words: liu for sulfur, jin for gold, and yin for silver (Zhen-jie et al., 1979). However, the name was discredited by the Commission on New Minerals and Mineral Names, because the mineral was recognized to be a low-temperature polymorph of uytenbogaardtite.

Gold in the envelope

Gold nuggets are light yellow or full yellow, depending on the admixture of silver. They are pleasant to look at. In comparison with native gold, petrovskaite and uytenbogaardtite are Cinderellas. Gold nuggets can weigh several kilograms, whereas no giant gold-silver sulfide bodies have been found. Most often, these minerals form veinlets and 10—20 µm wide rims around native gold particles. Sometimes they occur as isolated microscopic inclusions and monolithic grains up to 3—4 mm in size and seldom as monocrystals or their compacts. 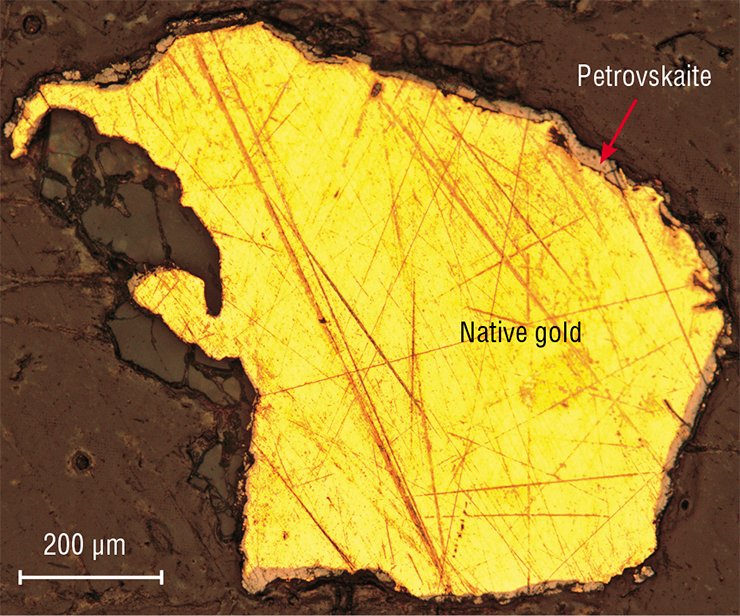 Gold-silver sulfides are as soft as native gold, but they are not malleable and less dense. Being lighter, petrovskaite and uytenbogaardtite miss from washings. It is not surprising that they can be found only in rare cases when they are compacted with large gold particles and only when the placer is close to the provenance.

The latter condition is related to the fact that these fragile minerals are readily worn out and blasted off by water streams. Therefore, native gold in dark envelopes is a reliable sign of the proximity of gold provenances.

Precious metal concentrations in gold–silver sulfides vary broadly, as in native gold. The proportion of sulfur varies in a very narrow range. Sometimes it is difficult to differentiate petrovskaite and uytenbogaardtite from gold and silver contents.

This variability in the compositions of petrovskaite and uytenbogaardtite is likely to be related to the irregular structure of mineral grains. Alternatively, the minerals contain the so-called solid solutions of the composition Ag2-xxS (0 < x < 1.7), which form metastable phases. This suggestion is argued for by the broad and practically continuous variability of the characteristic trait, gold/silver ratio, in gold–silver sulfide samples. 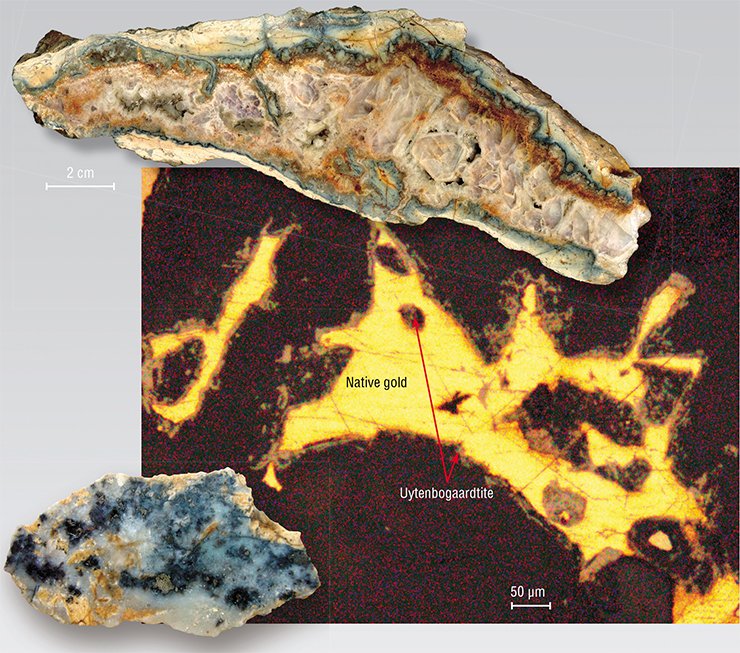 In addition to gold, silver, and sulfur, petrovskaite and uytenbogaardtite sometimes contain admixtures of selenium, iron, copper, tellurium, mercury, etc. Note that these elements are common in native gold as well.

Gold–silver sulfides from some deposits contain one or two accessory elements and others have three or more. These trace elements, as well as admixtures in many other minerals, reflect ore formation conditions. They serve as geochemical criteria for evaluation of the potential of a prospected region.

Gold–silver sulfides themselves can be used as geothermometers. The absence of uytenbogaardtite or petrovskaite pseudomorphs, low-temperature structural species formed after high-temperature ones with the preservation of the shape and chemical composition, indicates that ore deposition occurred at temperatures below 183 or 307 °C, respectively.

What occurs in nature? In the 1920s, Professor A. E. Fersman coined the terms hypergenic for minerals formed close to the surface with participation of water saturated with atmospheric gases, primarily oxygen, and hypogenic for minerals of plutonic origin.

The compositions of mineral associations in which gold–silver sulfides are present indicate that the sulfides can be hypergenic or hypogenic, as well as their obligate associate, native gold. Moreover, it is often difficult to find out whether the ore minerals were formed by hypogenic or hypergenic processes or their combination. 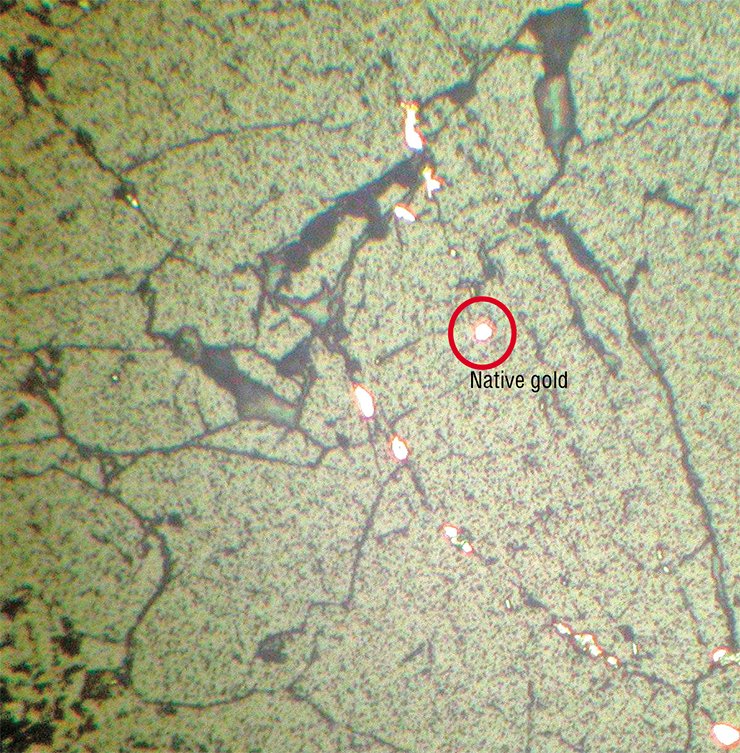 There are different hypotheses concerning the details of gold–silver sulfide formation. Resting on these hypotheses and studies of sulfides from deposits of different origins, Siberian scientists developed several physicochemical models of the formation of uytenbogaardtite and petrovskaite.

Gold–silver sulfides have been found in more than 50 depo¬sits and ore shows. Most of them are in Russia, and others are in USA, Peru, Bolivia, Argentina, Indonesia, Slovakia, Kazakhstan, Uzbekistan, and China.
About 20 deposits and ore shows are in northeastern Russia. They formed there under the conditions of Circum-Pacific intracontinental and pericontinental mobile belts and zones for long: from the Paleozoic to the Late Mesozoic. Gold–silver sulfides have also been found in the Urals and Altai. Recently, uytenbogaardtite was found in Western Taimyr.
The most recent finding of uytenbogaardtite and petrovskaite was in the worldwide known gold deposit Broken Hills, New Zealand

The so-called hypergenic model shows that uytenbogaardtite can arise from native gold and sulfur-containing minerals, e.g., pyrite FeS2 or galena PbS. They were exposed to atmospheric precipitation or “fissure-vein” acidic water of subsurface formation (Savva, Palyanova, 2007; Savva et al., 2011). Petrovskaite forms if the fineness of the original gold is high, > 650 ‰, and uytenbogaardtite, at lower fineness, 370—650 ‰.

The hydrothermal model implies deposition of uytenbogaardtite and petrovskaite from ore-bearing solutions of medium and low temperatures, e.g., after their cooling or mixing with cold surface water (Palyanova, Savva, 2009). There can be a great many of such scenarios, and it is difficult to determine the actual one(s).

The pneumatolytic–hydrothermal model considers the formation of gold–silver sulfides in fumarola fields of volcanoes, where the temperatures of gas jets vary from 90 to 940°C. Probably, they form by decomposition of gas particles containing precious metals and sulfur or by interaction of volcanic gases or molten sulfur with native gold deposited before (Savva et al., 2012). 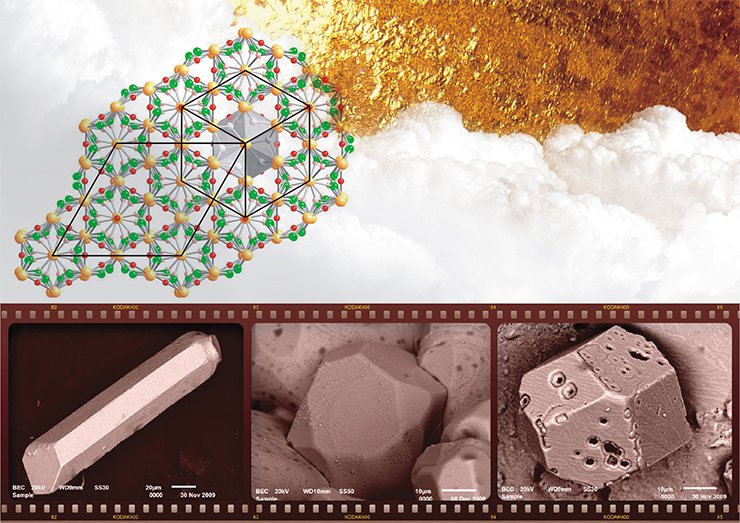 Finally, the magmatogenic model implies the involvement of sulfide ore melts. It is confirmed by laboratory synthesis of gold–silver sulfides during crystallization of melts of various compositions obtained by heating mixtures of gold, silver, sulfur, and iron in evacuated quartz vessels to 1050°C (Palyanova et al., 2011, 2012). This hypothesis is also argued for by findings of these minerals in igneous rocks and ores.

Unfortunately, at present we can only speculate what model reflects the natural processes best, what the actual source of matter is, and what mechanism works in each particular case. More information is needed on the crystallography of gold–silver sulfides and their thermodynamics in broad ranges of temperature and pressure.

For a long time, uytenbogaardtite and petrovskaite were considered rare. Presently, they are found so often that soon they will be as common as exotic fruit. Although the occurrence of these microminerals in natural bodies has been studied insufficiently, their amount may be comparable with that of native gold.

Obviously, they must exist in sulfide ores of deposits of various origins wherever native gold and sulfides of iron, lead, zinc, and silver are present. It is reasonable to seek uytenbogaardtite and petrovskaite not only in primary gold deposits but also in placers, although they are found less frequently than native gold.

Anyway, these unique minerals deserve to be known and sought together with native gold as “gold that does not glitter.”

The photos in the article are by courtesy of the authors