Quest for the Triassic. Photo Essay 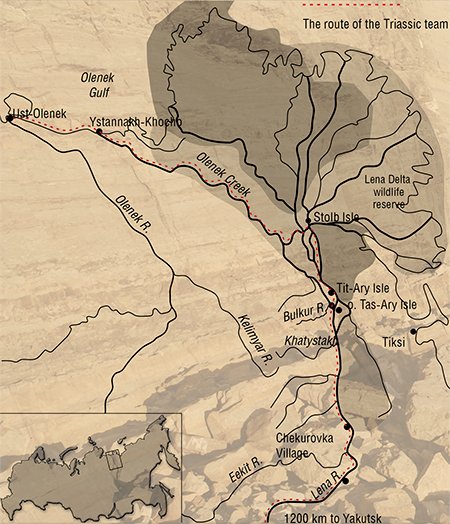 The Triassic team included ten experts in diamond mineralogy, search for diamond deposits, stratigraphy, and paleontology. The prospecting was conducted in the Bulun ulus, located in Arctic Yakutia. The studies were focused on the lower reaches of the Lena River downstream of Chekurovka Village, the Olenek Creek in the Lena delta, lowermost reaches of the Olenek River, and the Olenek Gulf in Laptev Sea...

In terms of the geological objective, the work was aimed at the establishment of regularities in the spatiotemporal location of ore-bearing sedimentary horizons in the northern Yakutian diamondiferous province. In other words, there were several objectives: bed-by-bed study of key sections of Upper Carboniferous, Permian, Triassic, and Jurassic deposits; paleontological studies for accurate demarcation of beds formed in different periods; and refinement of the corresponding time scales. Also, it was necessary to take rock samples from key sections and exposures of Upper Paleozoic and Lower Mesozoic ore-bearing horizons and heavy mineral concentrate samples from watercourses in drainage nets of the Lena and Olenek. The mineralogical group of the Institute of Geology and Mineralogy, Novosibirsk, consisted of three people, and their task was testing sedimentary horizons for diamonds and kimberlite indicator minerals.

The motorship Captain Gorovatskii was chartered for the trip along the Lena River, and studies of river tributaries were intended to be done by walking trips or with inflatable motor boats.

The Triassic team started its journey from Yakutsk on July 13, 2010. We could not depart earlier because of the late northern floating season and inevitable bureaucratic hurdles.

The principal executive in the field studies of the Triassic team was the Sobolev Institute of Geology and Mineralogy, Siberian Branch of the Russian Academy of Sciences, Novosibirsk. In addition to IGM researchers, the team included experts from the Diamond and Precious Metal Geology Institute, Yakutsk, and the Siberian Research Institute of Geology, Geophysics, and Mineral Resources, Novosibirsk. The leader of the team was Candidate of Geology and Mineralogy I.V. Budnikov, Vice-Director of SRIGGMR and Chairman of the Interdisciplinary Stratigraphic Committee

It took three days for the ship to come to the first landing site. The team spent them by doing prosaic but necessary work: equipment check, refinement of the work schedule, etc.

The first field studies were planned to be done in regions with the severest climate: the Bulkur River, lower reaches of the Olenek, and the Olenek Gulf. 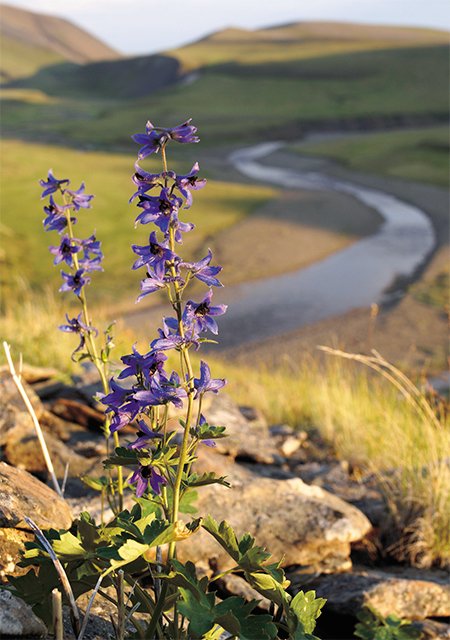 The team landed in Tit-Ary Village, 15 km downstream of the Bulkur junction, on July 15. It arrived at the working site, located approximately at 7 km from the junction, with the help of local residents.

It is difficult to conduct field studies in far northern regions, which are covered with tundra, enlivened only by dwarf birch and shrubs in ravines, close to water. As a consequence, it is short in fuel, necessary for warming and cooking. The main means of transport used by the local population are snowmobiles. Surprisingly, they are in use both in winter and in summer. Tracked vehicles are best fit for the loose tundra ground. On July 27, the team left the camp and arrived at Cape Ystannakh-Khocho in the mouth of the Olenek Creek three days later.

A fishing village of the same name was located on the cape, or, rather, its remains. Allegedly, it was destroyed by a storm surge in the late 1980s. As mentioned by E. Smurgis, the village still existed in 1988 and consisted of about twenty houses.

The team stayed there for two weeks to explore a large route leg from the Lena to the Olenek, which was the most difficult. The team left Ystannakh-Khocho and covered about 65 km from Cape Tumul to the Olenek mouth along the Olenek Gulf coast by boats. The air was strikingly clean there, with no haze, constantly seen in more densely populated sites; therefore, landscape details and clouds were clearly seen even at large distances. 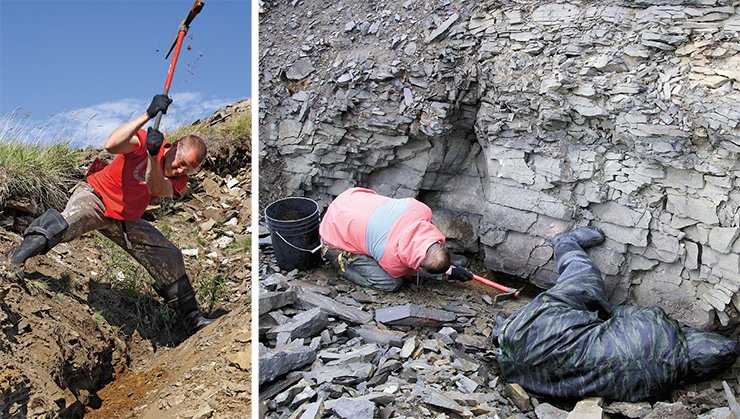 This historic spot near Ust’-Olenek Village houses the tombs of the famous Russian explorer V.V. Pronchishchev, member of the Great Northern Expedition, and his wife, T.F. Pronchishcheva, the first female polar explorer.

The team returned to the motorship on August 13, soon after the end of work in the Olenek area. With the climate of those latitudes, it was nearly fall. Grasses and shrubs became to turn yellow, and only spruces in river valleys remained green. 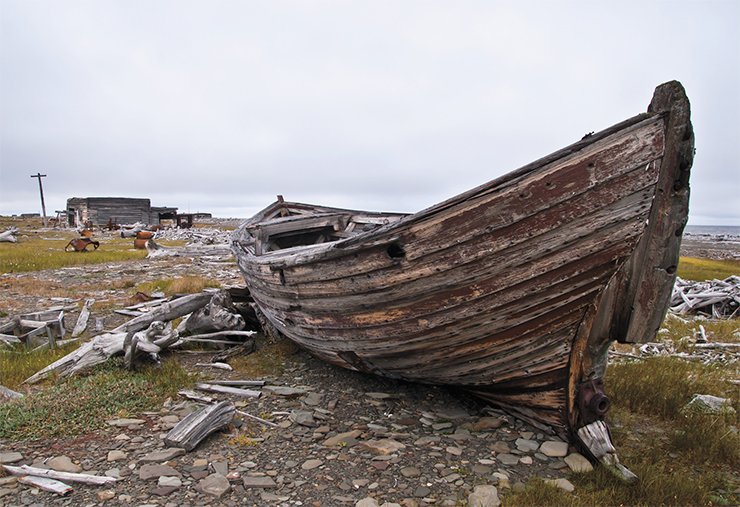 THE PRONCHISHCHEVS: A COUPLE OF POLAR EXPLORERS
The Great Northern (alternatively named the Second Kamchatka) Expedition is among the largest research events not only in Russia but even in the whole world. It occurred in 1733—1744. Its teams included thousands of people (together with the supporting staff). They investigated the Arctic coast of Siberia from the Dvina mouth to Chukotka, coastal areas of the Arctic Ocean, and the northern Pacific.
The Lena-Yenisei team was led by the naval officer Vasilii Vasilyevich Pronchishchev. The team departed on June 30, 1735, in the Yakutsk sloop. The crew consisted of over 40 men, including the navigator Semyon Cheluskin and the land surveyor Nikifor Chekin. 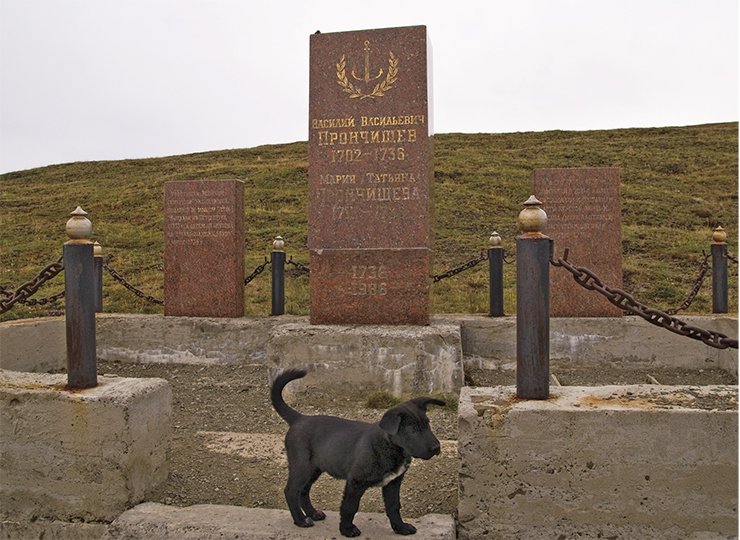 The team explored the region from the Lena mouth to the Taimyr coast in the west. The overall length of the coastline surveyed by Pronchishchev was 500 km.
On August 29, Pronchishchev went for a survey route in a row boat and broke his leg. After returning to the sloop, he went faint and soon died. The genuine cause of death was fat embolism as a result of the fracture, but it became known quite recently, when the grave was opened up in 1999. Earlier, it was believed that Pronchishchev had died of scurvy.
Pronchishchev’s wife Tatiana Fyodorovna followed him in the expedition. Her participation in the expedition was kept secret. She was not mentioned in reports by Pronchishchev, Chelyuskin, or the heads of the expedition V. Bering or A. Chirikov. She survived her husband by a short time and died two weeks later.
Pronchishchevs’ grave was found by the geologist A.L. Chekanovskii in 1875. Its cross was recovered twice: by the prominent polar explorer E.V. Toll in 1893 and by the hydrographer N.I. Evgenov in 1921. Presently, the grave is protected as a historical site. A polar station and Ust’-Olenek village are located nearby

The next halting point was the Lena mouth. The river has one of the biggest deltas in the world. Stolb island is a place of interest in the delta. As legend has it, is was erected by a shaman on the tomb of his daughter, who had fallen before enemies. The spirit of the girl, inhabiting the place, sporadically appears before people. The island is crowned by a cairn of stones and a hiding place where visitors put notes and sacrificial things.

After the stay in the mouth, the team gradually moved to the south along the riverbed. It was difficult to navigate along the mighty northern river. The motorboat often had to hide from a sudden storm or wind, which wore down the ship flag severely.

The work was conducted in one-day field trips. Researchers went out in the morning and came back to their swimming “home” in the evening. The ship had a hot shower, a washing machine, and a cook to maintain the working capacity of the team. A duty cook assistant was appointed daily, whereas others performed field studies. Only late in evenings the whole team gathered in the mess room. 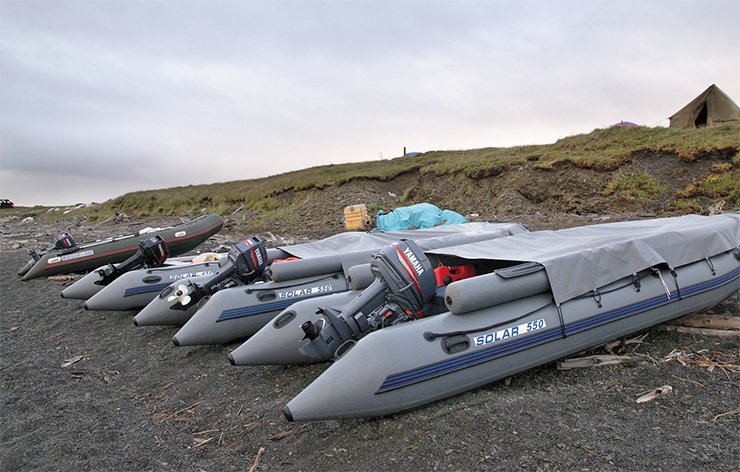 The endpoint of the journey was the mouth of the Chubukulakh River, located upstream from Chekurovka. The team started back from there on September 10. The way took twice as much time because the ship struggled against the stream. 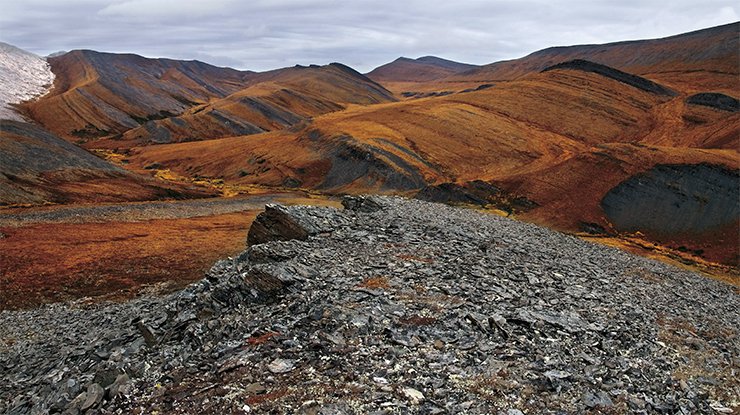 The Triassic team returned to Yakutsk on September 18. It had covered over 3500 km by water, not to mention field work. The field season of 2010 was over.

The team completed the task successfully. During the field study, we attended all scheduled objects, including those the most difficult to access. 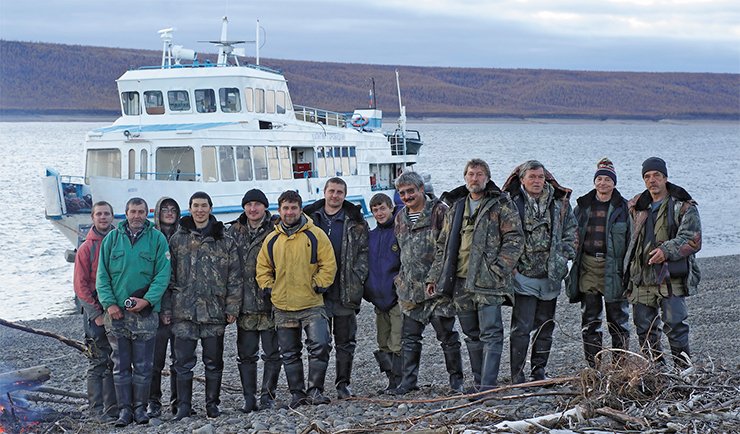 We obtained a large body of new data in stratigraphy, paleontology, petrology, and mineralogy of diamond-producing rocks. This information is not only of academic significance, but it will also help in the development of methods for diamond deposit prediction and prospecting.

The photos in the article are owned by the author