REM: How It All Began

Advances in the development of methods to study the surface structure and morphology of solids by means of electrons accelerated by the electric field are undoubtedly associated with the works of the outstanding German physicist Ernst Ruska. In 1931, almost simultaneously with R. Rudenberg, who applied for a patent for a transmission electron microscope, Ruska and his doctoral advisor M. Knoll published a paper in which they proposed to apply electron beams instead of light for the creation of an electron microscope. Fifty-five years later, Ruska together with G. Binning and H. Rohrer (the inventors of a scanning tunneling microscope, which is also extremely important for surface studies) were awarded with the Nobel prize in physics

The young engineer Ruska began to work as a researcher in 1929 in a team headed by Prof. Knoll. Based on magnetic electron lens theory, which already existed at that time, they were designing a device to focus electrons with the use of a short coil. It is worth noting that their studies were focused on the development of an oscilloscope cathode ray tube intended to measure fast electric processes in electronics. However, in the course of the works, the researchers found that the coil allows one to obtain images of anode apertures at different magnifications depending on the current passing through the coil. Thus, the first electron microscope images were obtained. 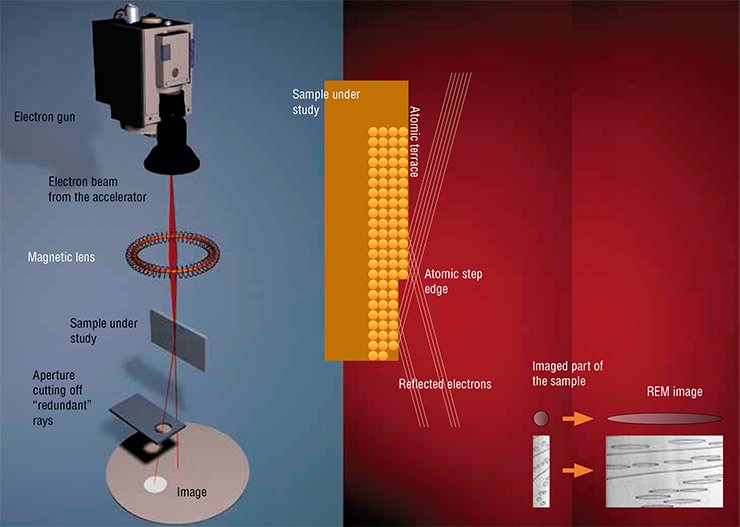 Already in March 1931, the researchers constructed the first transmission electron microscope (TEM) with a two-stage system of electromagnetic lenses. The first TEM had a modest 16-fold magnification. It should be noted that when designing that first microscope, Ruska and Knoll were not familiar with the works of L. de Broglie, who in 1925 put forward the idea of the wave nature of the electron. After getting familiar with this idea, Ruska made simple estimations to show that the spatial resolution of the electron microscope should be larger by at least five orders of magnitude than that of the light optical microscope, which had already been widely used in physics, biology, medicine, and other sciences.

Reflection electron microscopy (REM) was developed almost simultaneously with the TEM. As far back as in 1933, Ruska was the first to show that electrons reflected from a sample surface could be used to form a surface image.

Originally, researchers used diffused scattered electrons to produce images in the electron microscope. These electrons formed a shadow contrast from surface morphology features. However, REM did not become popular at that time due to the poor resolution of the method, which did not allow one to see the details of morphology elements. It was only much later, when J. M. Cowley (1976) studied the Bragg contrast of reflected electrons, that scientists began to develop interest in REM: the use of Bragg beams allowed a visible improvement in instrument resolution. The development of ultrahigh vacuum techniques also contributed to the successful application of REM in the analysis of atomically clean surfaces of metals. 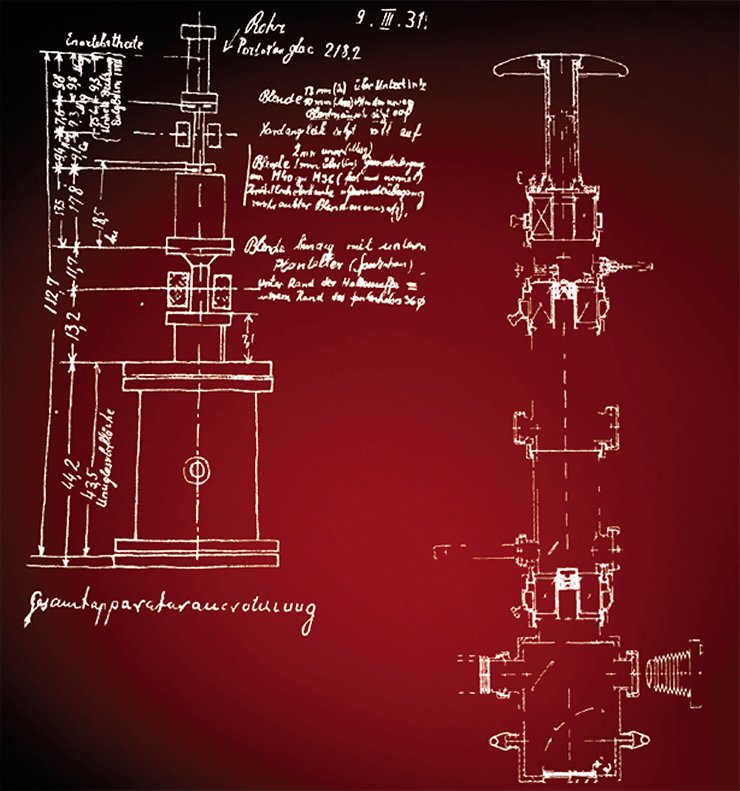 Ernst Ruska (1988): “This apparatus is justifiably regarded today as the first electron microscope even though its total magnification of 3.6 x 4.8 = 14.4 was extremely modest. The first proof had thus been given that—apart from light and glass lenses—images of irradiated specimens could be obtained also by electron beams and magnetic fields, and this in even more than one imaging stage. But what was the use of such images if even grids of platinum or molybdenum were burnt to cinders at the irradiation level needed for a magnification of only 17.4x. ...In a next step I had to show that it was possible to obtain sufficiently high magnifications to prove a better-than-light-microscope resolution.”

Ernst Ruska (1988): “By means of this instrument [the first electron microscope] I could only make a few images with this instrument which magnified 12,000×, but I noticed a decisive fact which gave me hope for the future: even very thin specimens yielded sufficient contrast, yet no longer by absorption but solely by diffraction of the electrons, whereby—as is known—the specimens are heated up considerably less.” From: (E. Ruska, Nobel Lecture, 1988. p. 363)


The modern ultrahigh vacuum reflection electron microscope (UHV REM) with the original design of the differential cryogenic pumping system, which was developed at the Rzhanov Institute of Semiconductor Physics (SB RAS, Novosibirsk), provides a residual pressure of about 10–8 Pa around a sample being studied, which makes it possible to analyze structural and morphological transformations of atomically clean crystal surfaces.

The main distinction between REM and TEM consists in that the high energy electron beam in REM falls on a sample at a glancing angle of the order of the Bragg angle (~ 5°). As a result of the grazing incidence of the electron beam, a REM image has different scales of magnifications along and perpendicular to the incident electron direction. These scales can differ by several orders of magnitude depending on the diffraction conditions forming the image, in particular, on the electron energy and diffracted beam chosen for imaging. This causes strong linear distortions in the real shape of the surface objects observed in the REM image plane. However, for atomic steps, which are almost straight lines, a decrease in step length in a REM image does not hinder their visualization if they are located along the electron beam path: the steps become slightly winding although their actual curvature is small.

In REM the electron microscopic contrast is a superposition of diffraction and phase contrasts due to the presence of deformation fields near the atomic step and an electron wave phase shift when electrons are reflected from terraces adjacent to the step but lying in the neighboring planes.

There are two modes of image formation in electron microscopy: bright-field and dark-field. In a bright-field image, Bragg beams are cut off by an aperture, and the image intensity of a crystal element is determined by the brightness of the beam that has passed through the sample. In a dark-field image the contrast is determined by the intensity of the diffracted beam that has passed through the aperture.

REM uses the dark-field mode of image measurements; however, the ideal case whereby the aperture cuts off only the transmitted beam has not been implemented so far.