Silicon Nanotechnologies in a Tube

The ability of diatoms to skillfully manipulate silicon (this ability has been evolving and “optimized” for tens of millions of years) is of great interest to researchers in the epoch of high technologies. The term “diatom nanotechnologies” was introduced by R. Gordon (Gordon and Aguda, 1988) in the late 20th century. Currently, we may speak about silicon nanotechnologies in a broad sense (Grachev et al., 2008), with regard to all the group of pigmented heterokonts that include both diatoms and chrysophytes

Thanks to their optical properties and a large surface area, on which antibodies and enzymes can be immobilized, diatom frustules can be used as biosensors (Gale et al., 2009; Sheppard et al., 2012). As has been recently demonstrated, diatoms are most useful for target delivery of poorly water-soluble drugs, particularly anticancer substances (Delalat et al., 2015).

Diatom frustules are also the object of tribology, the science that studies interacting surfaces of solid bodies in relative motion. Here, of particular interest are the mechanisms underlying the formation of colonies of algal cells with the help of silica constructs and adhesive substances they secrete (Crawford and Gebeshuber, 2006; Gebeshuber, 2007). Diatoms could also become an economical substitute for such nanotechnologies as planar lithography, which is used to fabricate “flat” semiconductor devices, microelectronic integrated circuits, and some superconducting nanostructures. One of the stages in this technology is the formation of a raised pattern that repeats the microcircuit topology in the sensitive layer on the substrate surface. If only we could “order” a particular pattern to a diatom! 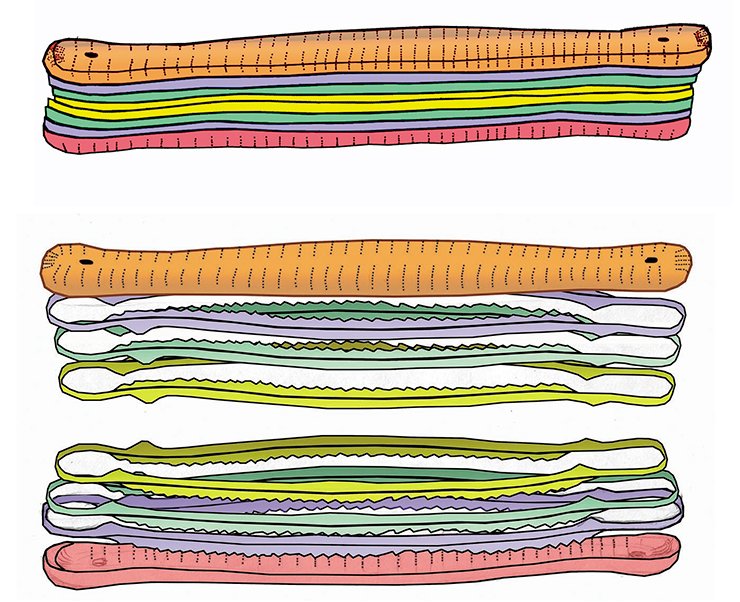 Among all unicellular organisms that synthesize micro- and nano-sized inorganic structures, diatoms are notable for a special diversity of shapes. According to the symmetry of their frustules diatoms fall into three main groups: centric with radial and bipolar symmetries (the most ancient group), and pennate with bilateral symmetry. In turn, pennate diatoms are divided into araphids and raphids (without a raphe on their valve or with it)

This dream excites a lot of people: its implementation could become the basis of fundamentally new biotechnological plants. However, though these studies have been conducted since the mid-20th century and despite the prospects of economic and other benefits, we are still very far from a clear understanding of the genetic and cellular processes underlying the morphogenesis of diatom silica frustules. 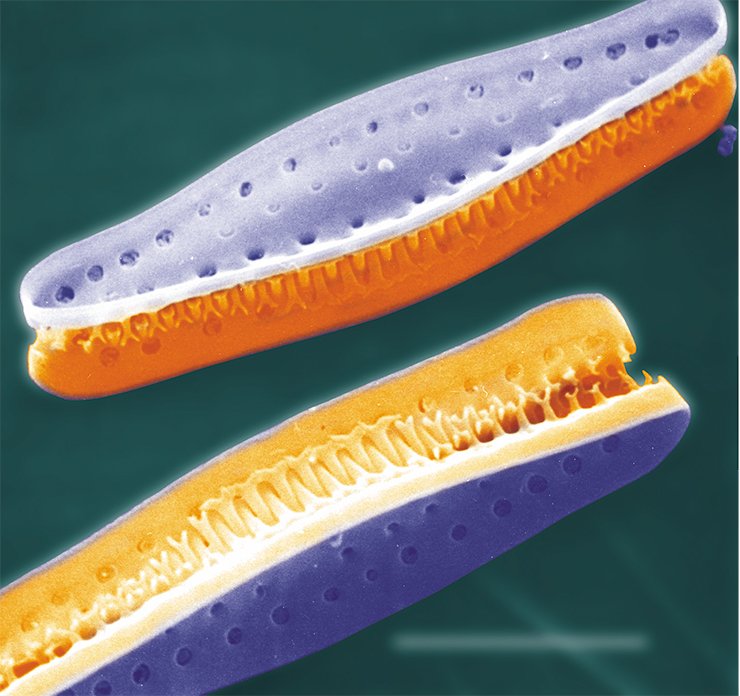 The silicon frustule of diatoms is formed in a specialized cell organelle, a silica deposition vesicle enclosed in a specific membrane, the silicalemma. It is now known that the cytoskeleton and particularly microtubules play a major role in the formation of a frustule; the microtubules of some diatom species have been visualized by fluorescence and confocal microscopy. The algae treated with certain substances that inhibit the function of microtubules (colchicine, lumicolchicine, oryzalin, etc.) form frustules with various abnormalities. 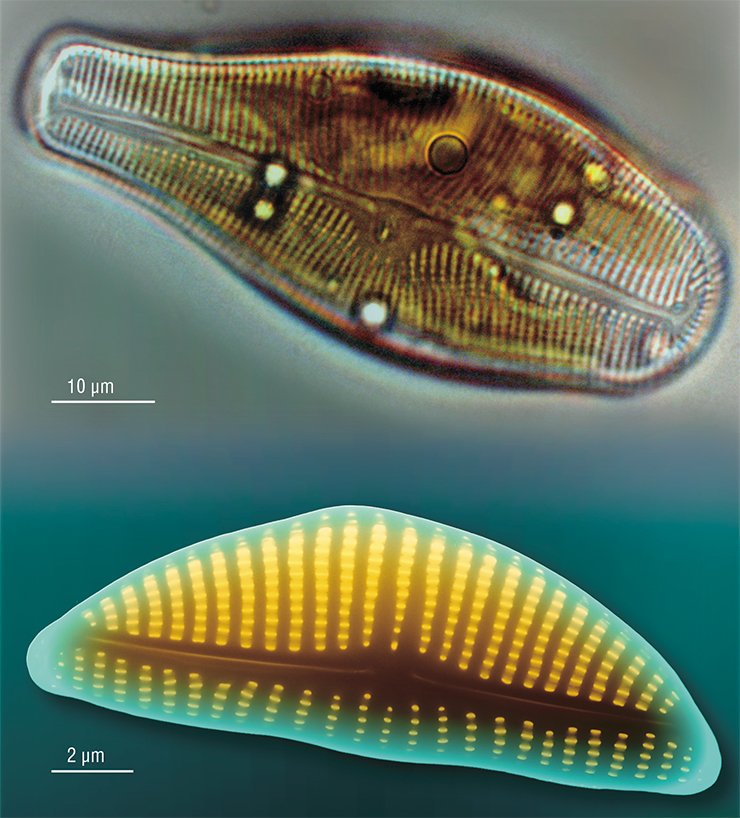 For the first time in the world, the project of the Department of Cell Ultrastructure with the Limnological Institute (Siberian Branch, Russian Academy of Sciences) has given an insight into the role of the cytoskeleton in frustule morphogenesis. The study was performed in a synchronized culture of diatoms where all cells were at the same stage of a cell cycle. The diatom cell culture is quite easily synchronizable: it is sufficient to keep the cells for a certain time in a silicon-free medium. Initially, the cells will actively spend the stored silicon on constructing a frustule; once the silicon reserve is depleted, they will stop dividing and “freeze” at a certain stage of their life cycle. After silicon is added to the medium, the cells restart forming new frustules and dividing.

The experimental object was the diatom Synedra acus subsp. radians; this alga has been a model object at the Limnological Institute for several years. It allows the researchers to study all aspects of frustule morphogenesis, and propagates itself well in a laboratory culture. Two inhibitors of microtubule function with different mechanisms of inhibition, colchicine and paclitaxel (for the first time) were used in the experiments. Colchicine blocks the assembly of new microtubules by binding to their growing ends. Thus, the depolymerized microtubules cannot restore and are soon destroyed; they can recover after removal of colchicine. On the contrary, paclitaxel blocks the depolymerization of microtubules by binding to the protein β-tubulin, which causes the formation of microtubule bundles.

Experiments with synchronized Synedra culture have shown that it is possible to get new silica forms by adding colchicine at a certain moment of morphogenesis (Kharitonenko et al., 2015). For example, adding colchicine 1.5 h after the beginning of frustule morphogenesis gives the largest number of valves with uneven and unparallel rows of areolae (pores), while adding it after 0.5 h gives the largest number of crooked valves. The most interesting fact is that valves without pores are formed only if colchicine is added 2.5 h after morphogenesis starts. This is also true of paclitaxel. When both inhibitors are used, the share of valves with abnormalities and their patterns of morphological changes depend only on the morphogenetic stage at which the inhibitors are added to the algal culture.

However, paclitaxel can induce such abnormalities in the valve structure that are not observed in the case of colchicine. These abnormalities include large pores (solitary cases) and valve widening, rather frequently observed when paclitaxel acts at early stages of morphogenesis. 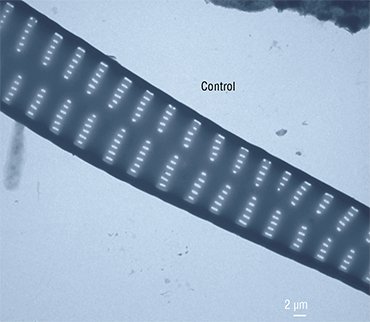 Nadezhda Volokitina (Limnological Institute) succeeded in cultivating another diatom species, Aulacoseira islandica, prevalent in the Lake Baikal phytoplankton in certain seasons. The morphogenesis of this diatom, unlike Synedra’s, is vague. The valve of the Aulacoseira diatom is shaped as a “microbucket”, and the cells in a colony are fastened together by special linking spines.

Since this species has a thin frustule which can be crushed and torn during manipulations, a special fluorescent dye is used to assess the effects of inhibitors on its morphogenesis; the dye is incorporated into the forming valves, and it allows the researchers to observe the results of experimental impact with the help of a confocal microscope.

This technology has demonstrated that some daughter valves fuse together in the presence of colchicine so that “microbuckets” turn into “microtubes”. Thus, if a cell is prevented from forming the “bottom” of a “bucket” (the face of a valve) at a certain stage of morphogenesis, it will continue to construct the valve bend according to the programmed scenario. It is as if constructors had not made the foundation of a building, and another team started erecting the walls and roof. 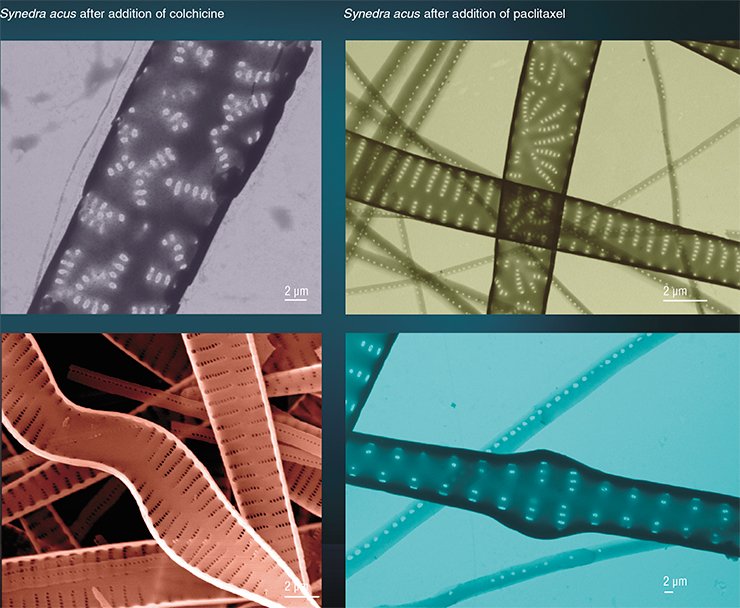 Current studies of the mechanisms that underlie the construction of diatom cell valves will allow us to use these silicon bionanotechnologies for the benefit of mankind, although there is a long way to go yet. Perhaps, further research into the regulation of microtubule function in the diatom cytoskeleton at cellular and genetic levels will make it feasible to obtain mutant algal cultures that could produce “tailored” silica structures with required characteristics. 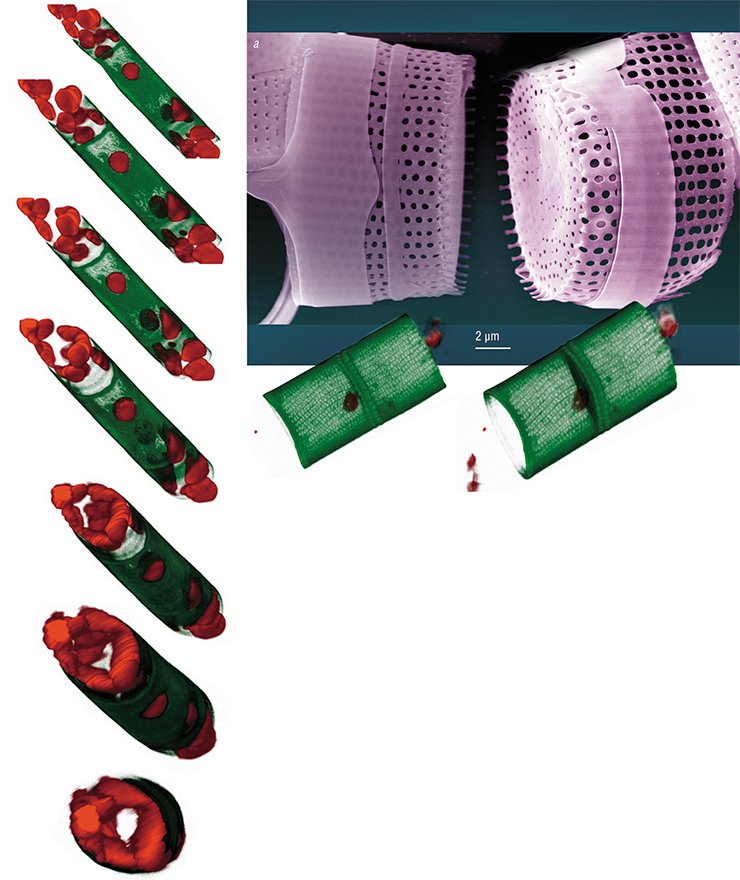 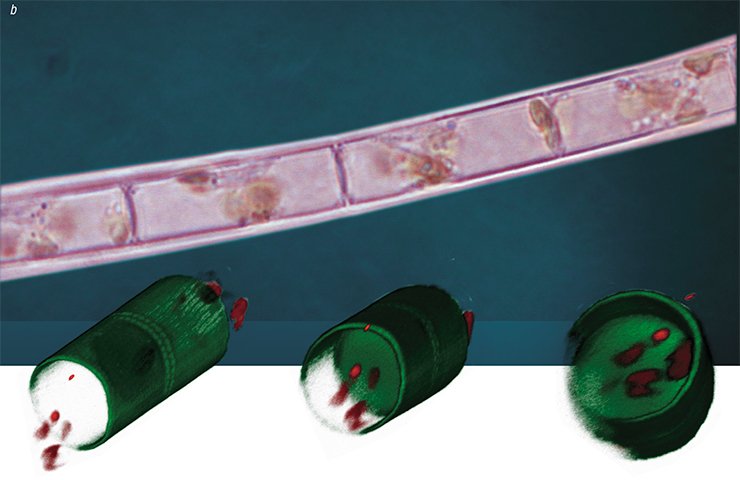 Photos by the courtesy of the authors