Synchrotron Radiation at the Institute of Nuclear Physics: Formula of Success

More than nine years ago, the staff of SCIENCE First Hand visited the Budker Institute of Nuclear Physics (INP), one of the largest national academic institutions and the internationally recognized science center. The fledgling editors of the newly organized journal, who were far from the world of high-level physics, were greatly impressed by seemingly endless labyrinths of accelerators underground, by amazing tangles of wires and obscure constructions, and by historical “round tables” established by Gersh I. Budker, the first director of the Institute

More than nine years ago, the staff of SCIENCE First Hand visited the Budker Institute of Nuclear Physics (INP), one of the largest national academic institutions and the internationally recognized science center. The fledgling editors of the newly organized journal, who were far from the world of high-level physics, were greatly impressed by seemingly endless labyrinths of accelerators underground, by amazing tangles of wires and obscure constructions, and by historical “round tables” established by Gersh I. Budker, the first director of the Institute.

Anyone interested could easily approach the Institute administration and attend the meetings of scientific councils. And of course, we could not but remember an amazingly great number of intelligent, interesting, and memorable men’s faces (sorry for chauvinism). Now, having got familiar with physical terms, we can say that here, in a relatively small area, it became possible to achieve a strikingly high concentration of high-energy intellectual particles. These impressions resulted in a series of reports about excursions to the INP world, where young physicists, postgraduates, and personnel of the Institute were our guides.

… Almost a decade later, we saw the same shiny old-fashioned coffee pots on the same round tables, the same hospitality, and many familiar faces of all different ages, who practically had not aged: being engaged in high-level physics seems to be beneficial not only to intellectual longevity.

However, tangles of wires have grown larger in already familiar underground “caves”, while the fully equipped experimental bunker for SR studies on the “ancient” VEPP-3 storage ring suggests stable associations with Herbert Wells’ underground world of Morlocks… Stability is appreciated when we consider traditions, continuity in research, and scientific creativity; however, on our next excursion to the national leader in high-energy physics, we hope to see the implementation of long desired plans for the radical reconstruction of the accelerating complex.


SR at the INP: formula of success

It is known that synchrotron radiation (SR) is the daily bread for many users; for accelerator physicists, it is a parasite because it takes away a large part of energy pumped with great effort into the beam of charged particles accelerated nearly to the speed of light. Besides, it is hard work, though the end results are sometimes less than the efforts spent to achieve them. The point is that now the SR sources at the Institute of Nuclear Physics (INP) are VEPP-3 (created in 1972) and VEPP-4M (put in operation in the early 1980s and later modernized), on which studies in the field of elementary particle physics are conducted. Consequently, SR experiments take only 15 % of the total time of accelerator operation. 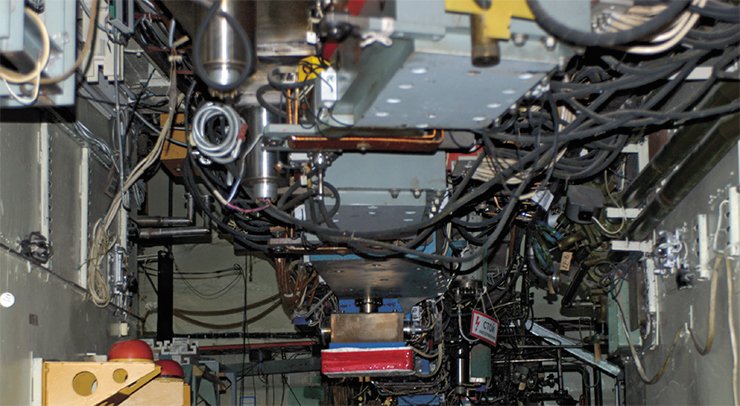 Thus, although SR experiments have been carried out at the INP ever since 1973, they still use VEPP-3/VEPP-4, which are not sufficiently bright first-generation SR sources operating in the X-ray range (the wavelength varying from 0.01 to 1 nm) and a beam energy of 2 or 4 GeV.

It is worth mentioning that the 2003 commissioning of the first line of a free electron laser system (a source of powerful terahertz radiation beams) principally expanded the INP’s research potential; however, it is still necessary to develop a more powerful new generation SR source that will operate in the X-ray range. 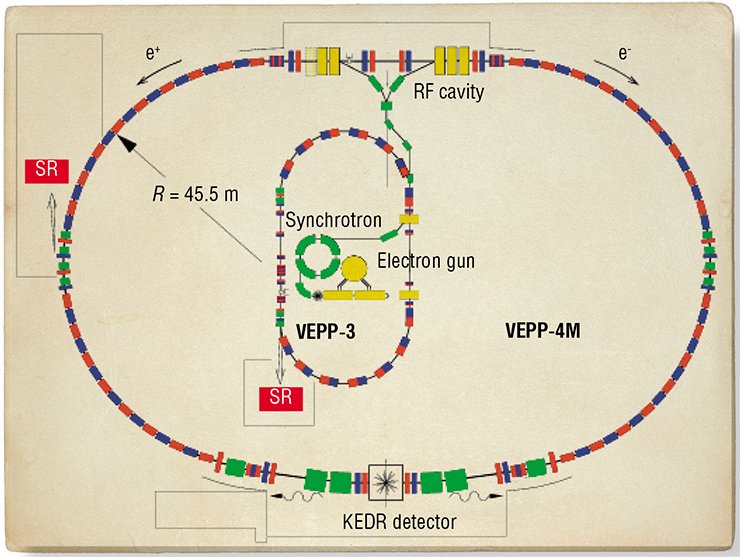 Today, several tens of large research centers with third-generation SR sources, such as Diamond Light Source (United Kingdom), Swiss Light Source (Switzerland), Soleil (France) and others are in operation; yet another two “brighter” sources—NSLS-2 (United States) and MAX-IV (Sweden)—are being commissioned. All the centers are in high demand and work at maximum capacity; there are expert systems to allocate the “beam time”: on a competitive basis, for researchers, and for a fee, for other users. Typical fee-paying users are large pharmaceutical companies that invent and test new drugs, which is hard and costly work that never ends.

The INP cannot compete with the large centers on these “highways” because of the beam characteristics of the available sources. So, if our scientists or technologists have a particular problem, e.g. testing a new drug, it is easier for them to go to England or to France, to the European Synchrotron Radiation Facility (ESRF), in which our country participates. 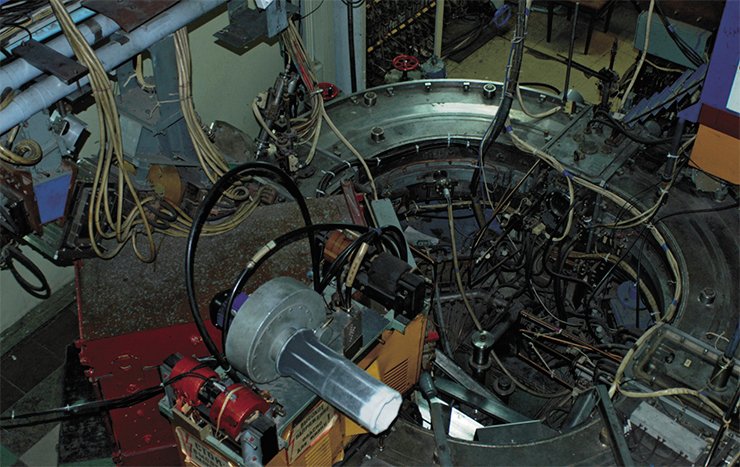 Nonetheless, our sources have been heavily exploited for both research and routine technological aims. For instance, the researchers from the Institute of Catalysis SB RAS (Novosibirsk) are constantly analyzing samples of novel catalysts intended for industrial applications. Our main advantage is that SR at the INP has largely maintained its initially unrestricted status of a research tool; so, practically any scientist can use it to verify his/her idea (however crazy it may be).

In this respect, it is very important that our SR sources are located in such an unusual infrastructure as Novosibirsk Akademgorodok, i. e. in a vast multidisciplinary environment. For instance, archaeologists, who work in the same neighborhood, can ask physicists to analyze any artifact they are interested in. Indeed, new knowledge is gained, as a rule, by combining unique samples provided by users and adequate research tools which can be realized with the use of SR.

At present, the Siberian Center for Synchrotron and Terahertz Radiation has 12 SR stations and 4 terahertz radiation stations. The major aims and tasks of the center are fundamental and applied studies in physics, chemistry (including catalysis), biology, medicine, ecology, geology, materials science, and also the development of new methods and technologies as well as the creation of new specialized radiation sources and experimental stations

Moreover, we elaborate the procedures which in principle are difficult to develop at large SR centers, which, to some extent, is due to administrative restrictions. A good example is the study of detonation processes with a submillisecond time resolution in a special explosion chamber located at the SR output channel. Since SR has the form of short flashes resembling the time structure of short electron bunches rather than a continuous flux (in our case, the duration of these flashes is 1 ns, and the recurrence period is about 100 ns), by studying the features of the interaction between radiation and the substance we can determine the current state of the substance with a corresponding time resolution. It means that during detonation it is possible to examine the character of chemical processes occurring in the moving detonation front, the growth dynamics of detonation nanodiamonds, and other effects that interest the specialists.

The first experimental station, named Detonation, was set on the VEPP-3 storage ring, and later a second station started its work on the VEPP-4 storage ring: the new chamber made it possible to investigate the detonation of charges weighing up to 200 g. Now this station is being modernized in order to study the effect of powerful laser plasma pulses on construction materials. The knowledge of these processes will be necessary for designing future thermonuclear reactors.

Other user stations are regularly updated as well. Thus, the application of new focusing lenses provided the improvement of the spatial resolution of X-ray fluorescent elemental analysis, which helps to determine not only the chemical composition of a sample but also the spatial arrangement of separate elements. Although we cannot compete with other SR centers in this field, we have succeeded in obtaining some interesting results. For instance, researchers from the Limnological Institute SB RAS (Irkutsk) detected a response of the elemental composition of bottom sediments to a change in the climate, such as Milankovich cycles, which allows researchers to use SR to investigate paleoclimate. Similar work is in progress now with bottom sediments from Altai lakes, in particular, Lake Teletskoye.

Yet another method of studying the state of matter under extreme conditions (at ultrahigh pressures of several GPa and temperatures up to 1000°C) is the diamond anvil technique, in which a sample is squeezed between two diamond nibs. Thereby it is possible to reach ultrahigh pressures in a small volume, thus modeling the behavior of matter at large depths, i.e. in the Earth’s mantel or even at the center of the planet. This station belongs to the Institute of Solid State Chemistry SB RAS (Novosibirsk).

Our latest developments include the COSMOS metrological station, designed for testing satellite devices, and PLAMYA, planned for studying rapid reactions such as combustion. The latter is being created in collaboration with the Institute of Chemical Kinetics and Combustion SB RAS (Novosibirsk).

However, the INP in the SR world is not just a participant: the Institute is also an active developer. The INP is practically a monopolist in producing superconducting wigglers (multipolar magnets generating a sign-variable periodic magnetic field), which are installed in rectilinear spaces of electron storage rings to increase radiation intensity. Novosibirsk physicists and engineers control the whole production cycle of these complex devices: from designing and manufacturing to testing and assembly on site. All over the world, from Australia to Brazil and North America, more than 20 wigglers made in Novosibirsk are currently in use. The INP researchers have developed, produced, and installed superconducting devices practically in all world SR centers, including Spring-8 (Japan), ELETTRA (Italy), CLS (Canada), synchrotrons in Brazil and Australia, and the only Russian specialized SR source at the Kurchatov Institute in Moscow.

At present, the research group dealing with wigglers is engaged in producing undulators, i. e. superconducting devices with a large number of poles and a low magnetic field. In contrast to wigglers, in undulators the radiation from separate poles is coherent, which provides monochromatic radiation with a substantially higher spectral brightness. All modern centers are interested in these devices. For instance, there is a tentative agreement on collaboration in this field with DLS (United Kingdom).

The main problem of the Siberian Center for Synchrotron and Terahertz Radiation has been the absence of its own specialized SR source, although at least five different ways to create it have been proposed in the last decade. The INP has the necessary experience, technologies, and production facilities; the only thing missing is financing.

The latest version of the new source differs from all the previous (and rejected) ones in that it is the most cost-effective. The project plans to use the tunnel in which VEPP-3 is currently located. It is also planned to extend the existing experimental chamber and to place new user stations there. A superconducting wiggler and a pair of superconducting dipole magnets will be used as radiation sources. A special magnetic structure of the ring will combine extreme compactness with a possibility for optimizing the beam brightness.

In conclusion, it is worth noting that in the last decades interest in the studies at the interface of sciences has greatly increased worldwide. In our academic center, a multidisciplinary scientific community that unites researchers from the institutes of Novosibirsk Akademgorodok and from other science centers has formed. The sincere interest of these specialists in SR studies guarantees a flood of research materials and publications, as well as extremely efficient use of all available methods and instruments. Novosibirsk National Research University must also be interested in a new SR source: our SR Center can train the students of all natural science departments, as is done at many other universities worldwide.

The INP has long deserved the right not to be a shoemaker’s child without shoes: it must have its own specialized SR source at the Siberian Center for Synchrotron and Terahertz Radiation. The only things lacking are federal financing and political will. Against all odds, we remain optimistic and believe in the future.