Previous
All news
Next
1551

Twenty Billion Positrons in One Shot!

In December 2015, the Budker Institute of Nuclear Physics (BINP, Novosibirsk) commissioned the VEPP-5 injection complex, which is the first part of the VEPP-5 accelerator. The injection complex is expected to boost the productivity of the existing colliders at the BINP and become an important step towards the future collider—the Super Charm-tau factory, which will be the final phase in the implementation of this mega-science project

The most important feature of a collider is its luminosity, which grows with increasing frequency of collisions between the particles of the colliding beams. The luminosity depends, firstly, on the accuracy of beam focusing and, secondly, on the quantity of the particles. Achieving an increase in luminosity is the aim of the new VEPP-5 injection complex, which serves as a source of electron and positron bunches for all the BINP's facilities using colliding electron-positron beams.

Previously, one collider shot generated 2 billion positrons, but now this number has increased by a factor of 10, leading to an order-of-magnitude increase in the luminosity of VEPP-2000, one of the BINP's colliders, which was put into operation in 2009. The new injection complex enables VEPP-2000 experiments at energies ranging from 1 to 2 GeV with a record-breaking accuracy for this energy range. 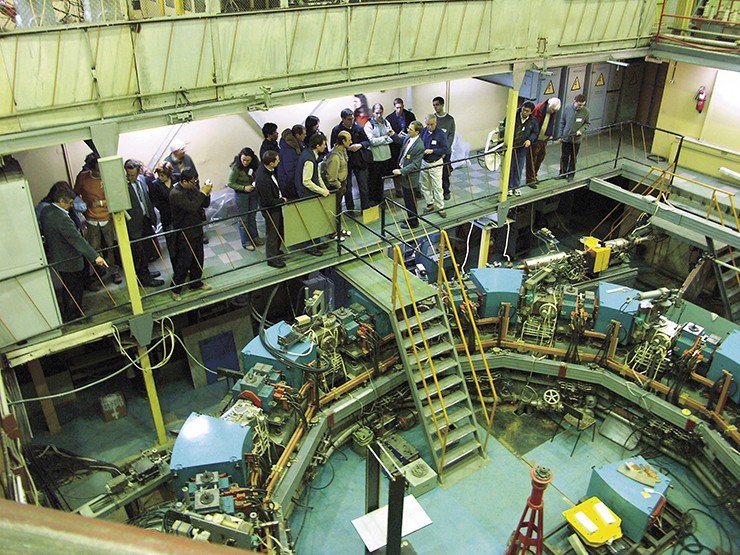 The planned luminosity of VEPP-2000 is 1032 cm⁻² s⁻¹ at an energy of 1 GeV in the bunch. The most fascinating process observed at these energies is the birth of nucleon-antinucleon pairs. Previously, BINP scientists investigated these processes at B-factories in the United States and Japan, but now, when they have the VEPP-5 injection complex, Novosibirsk is the best place for studying this physics.

The beam energy of the future collider factory is 2 to 5 GeV. Today, there is not a single facility in the world that can offer full-scale investigations at these energies. Super charm-tau, or Super-cτ, named after the two elementary particles (c for the charmed quark and τ for the lepton), will be used to study the generation of these particles, search for four- and five-quark, hybrid and other exotic states, and investigate their properties. The amount of data obtained at the Novosibirsk facility is expected to exceed the existing analytical capabilities by three to four orders of magnitude. This creates opportunities to explore new phenomena such as the CP-violation in D-meson and τ-lepton decays and the violation of the law of the lepton number conservation in τ-lepton decays.

Setting up the Siberian Super charm-tau factory will finalize the VEPP-5 electron-positron accelerator complex, the largest accelerator facility in Russia. This BINP's project is based on a new, unusual crab-waist collision scheme, which may improve the performance of a collider by two orders of magnitude. The same scheme was proposed by Novosibirsk physicists for the Future Circular Collider (FCC), which is planned to replace the Large Hadron Collider.

The collider factory is a project for the future. Nevertheless, commissioning the VEPP-5 injection complex makes it possible to boost the performance of the existing accelerators and, hence, expands the research capabilities in a very important area, i.e., the research applications of synchrotron radiation, which is now the "microscope" of modern science.

According to Cand. Sci. (Phys.-Math.) Anton Nikolenko, Senior Researcher at the BINP Synchrotron Radiation Laboratory, "Our synchrotron radiation is a powerful research tool that can be applied in chemistry, biology, archaeology, medicine, and other scientific fields. How does it work? For example, inside our VEPP-4 collider, there is a rotating electron beam. Its rotation velocity is a little less than the speed of light. Moving by a curved trajectory in a magnetic field, the beam becomes a source of radiation containing photons of various energies, from the infrared to spectral range. From this spectrum we cut out a piece for a particular experiment and use it to study various objects.”

Although high-energy physics is, undoubtedly, a fundamental science, it is not divorced from life. The scientific and technological solutions that are born in the development and implementation of high-energy facilities can be successfully used in industry and medicine to serve people here and now.