The Bermuda Triangle of Yamal

The expedition arranged by the Trofimuk Institute of Petroleum Geology and Geophysics, Siberian Branch of the Russian Academy of Sciences, Novosibirsk, Russia, in cooperation with the Gazprom Research Institute of Natural Gases and Gas Technologies in September 2014, conducted an integrated geological, geophysical, and geochemical study of a unique recent geologic object, the Yamal crater. The official opinion of Siberian scientists as to the nature of the phenomenon that flooded conventional and electronic mass media channels is based on the preliminary analysis of the information gathered. It is hypothesized that the crater arose owing to an avalanche methane ejection at a geologic fault intersection

The Gazprom state enterprise is the main developer of Yamal. The Institute of Petroleum Geology and Geophysics (IPGG) has cooperated with it for long. A special department, the Yamal Provisional Interdisciplinary Research Team, has been organized at the institute to support this cooperation. Therefore, the Gazprom management contacted Novosibirsk geologists and proposed to arrange a research expedition to investigate an unusual and apparently hazardous phenomenon. The proximity of the huge funnel of the Yamal crater to the producing Bovanenkovo gas field made gas workers concerned. 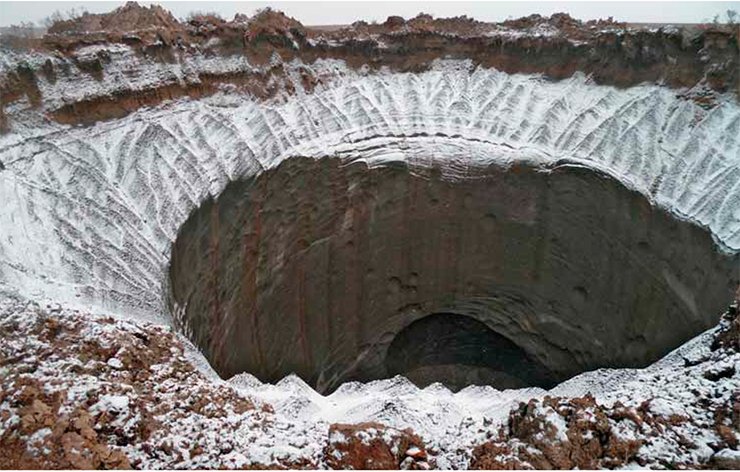 The institute arranged and funded the expedition, and Gazprom supported its infrastructure and transport. The crater is the spot where the interests of science and business converged. It is tempting to refer to it as a “hot spot,” but there was no explosion in the common sense, and the spot was rather cold.

In preparing the unusual and costly expedition to Yamal, the researchers sought to understand the nature of the “hole” and took the mystery out of the common phenomenon in the sequence of catastrophes, abundant in the geologic history of our planet.

It was not the first expedition to the Yamal crater, though. Geologists of the Earth Cryosphere Institute, Tyumen, Russia, were the first to get to Yamal. They dispelled the meteoritic and industrial hypotheses of the crater origin. Unlike the previous expeditions, this new one was integrated, better equipped, and had a well-prepared research program.

The main objective was to find out the causes and mechanism underlying the formation of the crater by studying the geomorphology, cryopedology, geophysics, and geochemistry within the crater and its surroundings. The study used the methods and tools common for such tasks.

The entire mission took slightly more than a week. It explored the region’s topography and geomorphological features of the crater, with an instrumental survey of its linear size (including the depth of its drowned portion). In the crater surroundings, it studied distortions in the vegetation and soil and examined crevices, ground subsidence areas, and the range of the ground throw.

Moreover, the mission conducted geocryological studies of the section of permafrost rocks. Samples of soil, ground, and water from the crater and the surroundings were taken for chemical and radiological analyses. In addition, depths of seasonal thawing and depths of lakes in the surroundings were measured. Samples were taken of the substance ejected from the crater and from its intact areas.

The funnel was filled with water. Its edges thawed and flaked. According to direct measurements, the crater’s depth to the water surface exceeded 30 m. What was below remains unknown. However tempting was the idea of descending to the funnel bottom, the scientists rejected it for safety reasons.

The crater is a regular cylinder 40 m in diameter, slightly widened at the surface. It is hard to escape the comparison with the neck of an uncorked champagne bottle. Admittedly, the cause of the “explosion” was gas whose pressure reached a threshold value and popped the cork out.

When you see such a tremendous hole, the first idea that comes to your mind is where the matter that was inside has gone. Ejected from the funnel, it was scattered almost evenly in all directions. The bulk was found along the circle of 140-m radius from the crater center, while occasional fragments had flown more than 180 m away!

However, the volume of the scattered grounds was much less than the hole. A thorough inspection of the crater wall indicated that nearly all of it was built of pure ice. A visual examination of the terrain revealed angular hollows on the surface, which were prints of ice blocks thrown by the outbreak. Ice melted quickly, and that was why the matter, formerly filling the crater, left no traces other than prints in the moss.

With an aided eye

A great part in the studies was assigned to geophysical methods, which allowed the scientists to look inside the Earth’s crust without digging or drilling. 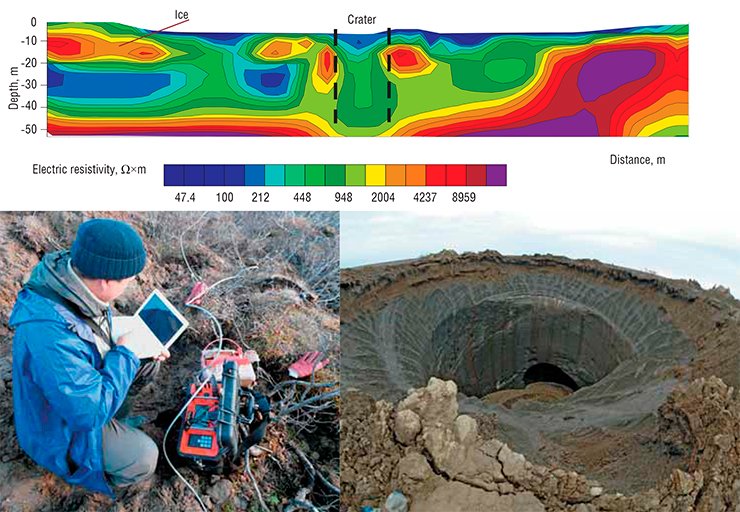 Magnetic studies revealed no anomalies associated with the crater; thus, the meteoritic impact hypothesis had to be discarded. All geomagnetic aberrations detected were attributable to the geologic features of the region.

The greatest volume of measurement was done by electrical resistivity tomography (ERT). This method is based on different resistivity of rocks, grounds, and ices. The geoelectrical ground resistivity profiles provided quite detailed information on the geologic structure of a region.

In our case, the section was probed by ERT to depths of 55–60 m. Twelve ERT profiles were made, and their overall length was about 6 km. Thus, the areas of native ice were delineated, and ice thicknesses were measured. Lithological stratification was done, and the boundaries of rock varieties were drawn. 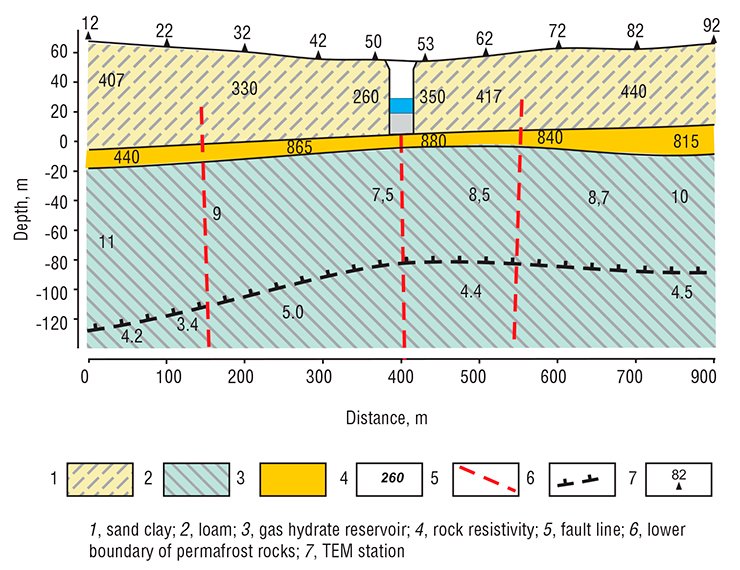 Geoelectrical sections were obtained at a depth of up to 200 m. They revealed rock layers differing in electrical resistivity and faults and allowed determination of the lower permafrost boundary. A horizon with abnormally high resistivity was detected at depths of 60–70 m; presumably, it was saturated with gas hydrates.

How did the crater arise?

Natural gas hydrates, or clathrates, are crystalline compounds forming from water and gas in a certain range of temperatures and pressures. As early as in 1961, Soviet geologists, including A. A. Trofimuk and N. A. Chersky, discovered that gas hydrates could form and exist under natural conditions, which was immediately proven by laboratory studies.

Gas hydrates are crystalline compounds forming from water and gas at certain temperatures and pressures. As a result of molecular packing, one cubic meter of natural methane clathrate contains about 164 m3 of gaseous methane and 0.87 m3 of water

Estimations of hydrocarbon resources in hydrates of the Earth’s crust done by different scientists vary from 1.8 × 1014 to 7.6 × 1018 m3 (Solov’ev, 2003). A characteristic feature of methane hydrate is its instability with a temperature increase and pressure decrease. Transition from a solid state to gas increases its volume by a factor of more than 160.

Most of methane clathrate deposits occur at depths of a few hundred meters. However, there are relict hydrates. In the Bovanenkovo field, they are found at 50–70 m (Chuvilin et al., 1999). 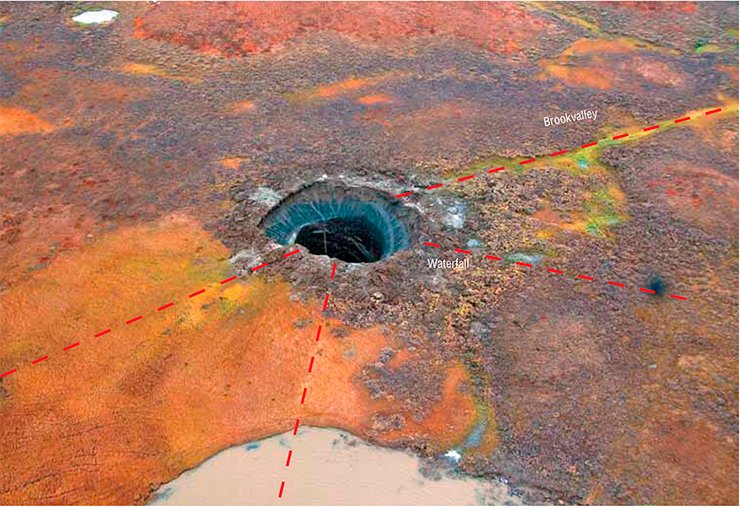 Novosibirsk scientists think that the Yamal crater was formed by gas hydrate decomposition at depths of 60–80 m. The geostatic pressure increased manifold, causing an outbreak of rock and ice.

Gas hydrates decompose with temperature elevation. What caused the temperature rise in the depth? It is known that a major oil deposit can be a source of an elevated heat flow. As a rule, the permafrost layer is thinner above such deposits. The oil deposit, so to speak, melts the overlying permafrost. As the Yamal Peninsula is rich in hydrocarbons, it is quite likely that a large petroleum body occurs beneath the crater, and its heat flow has heated the above gas hydrates.

In addition, clear geomorphological and geophysical signs of faults were found in the area under study. The crater is located right in the node of their intersection.

Thus, the crater, most probably, emerged when an elevated heat flow caused gas hydrate decomposition and geostatic pressure increase. Rock was ejected in a loosened site, at the intersection of tectonic faults.

Mass media often associate gas hydrate degradation and Yamal crater formation with global warming. However, gas hydrates are located much deeper than the layers affected by seasonal heat variations. The heat wave generated by the hot summer of 2012 had not yet reached that depth by the time of crater formation. Nevertheless, German explorers working at the IPGG research station on Samoilovskii Island in the Lena Delta report that the temperature at a close latitude and depth of about 30 m has increased by 3 °C in the recent decade. This means that the global warming should be taken into account, in addition to the heat flow from the Earth’s bowels.

Anyway, it is apparent that solar radiation and the nuclear furnace of the globe destabilized methane clathrate. Experts have yet to find out how it happened. Scientists of IPGG and the Institute of Hydrodynamics (Novosibirsk) plan to construct a model of this unique phenomenon to understand its mechanism.

It is pertinent to remark that journalists, instigated by the authors of this article, started manipulating the relationship between the Yamal crater and Bermuda Triangle. Indeed, scientists are practical people, who do not accept supernatural interpretations of ship disappearances. One of the working hypotheses concerning the abnormal events in the Bermuda Triangle (and proven in experiments) associates them with gas release from hydrates. When hydrates intensely dissociate in the bottom layer, the methane ice is converted to gas, and the process occurs in an avalanche-like manner, similar to a nuclear reaction. Huge volumes of gas are released, they “boil” the ocean, and ships sink in water with dissolved gas.

Precise scientific knowledge proves that the Yamal crater is a recent geologic phenomenon. All that remains is to determine the contributions of all factors to the development of the catastrophic scenario.

When this article was in preparation, we learnt that there was another expedition to the crater in early November, which involved experts from the Institute of the Earth’s Crust, Irkutsk; Moscow State University; and Gazprom Research Institute of Natural Gases and Gas Technologies. The explorers managed to get to the crater, take ice samples from its walls, and perform ground-penetrating radiolocation in the crater surroundings. At present, these data are being processed.

The authors hope that the integration of all reliable scientific data will give a clue to the mystery of the Yamal Bermuda Triangle formation.