Experts from the Laboratory of Seismic Tomography, Trofimuk Institute of Petroleum Geology and Geophysics SB RAS, Novosibirsk, Russia, deciphered some of the records obtained by seismic stations installed on the Gorelyi Volcano, Kamchatka. By now, researchers have processed records of only a few weeks of the huge body of data on seismic activity of the volcano during a year. Nevertheless, even these results are stirring

Presently, volcanologists can look inside a volcano by utilizing its response to seismic excitation. One of the key parameters is the ratio between the compressional and shear seismic waves (VP/VS). High values of this ratio suggest that liquids and melts are predominant in the interior of the volcano, and low values are indicative of the predominance of gases. 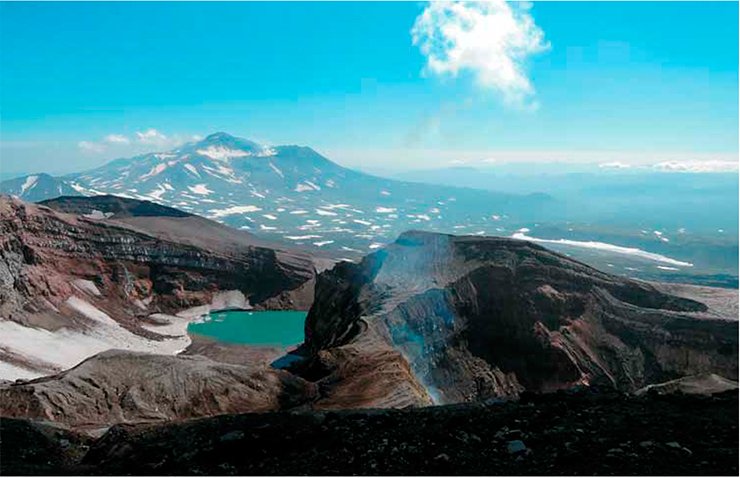 The vast majority of currently known volcanoes contain large amounts of liquids, and their VP/VS values are quite high: 1.8 or more. However, Gorelyi showed a low value of 1.5. The Novosibirsk experts had never faced such a phenomenon, and all data were rechecked several times.

It was found that such low VP/VS values were typical of gas fields and regions with intense fumarolic activity, where hot jets of volcanic gases and steam were ejected from the Earth’s bowels. Thus, it was suggested that the interior of Gorelyi was saturated with very hot steam with practically no liquid phase.

Figuratively speaking, this volcano is a steam boiler with a very tight lid formed by basaltic lava that effused in past eruptions. There is a small, few meters in diameter, orifice in the middle of the lid, and about 11,000 tons of volcanic gas is ejected through this orifice daily.

Steam superheated to 800°C belches from the orifice with a deafening roar, rises 300 m high, and condenses, forming a cloud, which is a landmark of the volcano, visible from afar. The orifice is a kind of a safety valve, which prevents an explosion of the enormously pressurized gas.

The Tolbachik Volcano in Kamchatka was the next object of volcanologists’ regard. It belongs to the Klyuchevskaya volcano group. This group is a unique “reserve” of volcanoes. Its 80-km diameter area houses 14 volcanoes, and each of them has a special feature. For example, Klyuchevskaya is the highest active volcano in Eurasia; Bezymyannyi ranks among the most explosive, and Tolbachik is among the world’s greatest basaltic lava producers.

The most intriguing question is how this small area managed to generate volcanoes so different in nature. Only a thorough exploration of the internal structure of the Earth’s crust and mantle can provide the answer, and for this purpose an adequate system of seismic observations should be developed. For several decades, the Kamchatka Branch of the Geophysical Survey, Russian Academy of Sciences (KB GS RAS) has conducted continuous observations of the Klyuchevskaya Group volcanoes with the help of its 20 permanent seismic stations. This network allows a fairly precise localization of the earthquake hypocenters beneath the volcanoes, but it is insufficient to perform seismic tomography and construct 3D crust and mantle models.

In 2014, there were ten seismic stations, both permanent and temporary, on Tolbachik, which were installed by the KB GS RAS. The Trofimuk Institute of Geology and Geophysics organized a costly expedition to add 20 more stations.

After an eleven-month deployment on Gorelyi, tons of equipment were trucked to the new locality, the Tolbachik volcano. The journey was difficult: it took Novosibirsk geologists 12 hours to get from Gorelyi to Tolbachik; sometimes, solidified lava flows had to be crossed. The stations were to be spaced as uniformly as possible, and it was a hard task given the vast area of the region, scribbled with the lava flows by past eruptions. In this situation, a helicopter was very helpful. 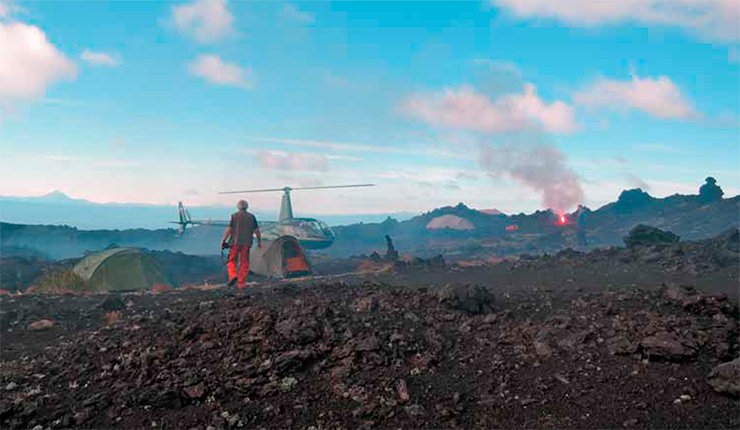 Unfortunately, two stations have broken down, and now the network operating on Tolbachik consists of 29 stations set at intervals of 4–5 km on average.

An even larger expedition is scheduled for the next year. Its goal is to install seismic stations on all the volcanoes of the Klyuchevskaya group. Surely, it is beyond the scope of one research institute, and Novosibirsk scientists cooperate with other research teams both in Russia and abroad.

As mentioned, cooperation with the colleagues from the Institute of Volcanology and Seismology proved to be fruitful and mutually beneficial. For the second time, N. Shapiro, Deputy Director of the Institut de Physique du Globe de Paris, France, joined the Novosibirsk expedition. Actually, he was one of its inspirers. Together with his colleagues from Colorado State University, he developed a new method for exploring the Earth’s crust and mantle, applicable not only to studies of the interior but also to tracing changes occurring deep in the globe, essential for predicting eruptions. The point of the method is that it uses not only seismic waves from explosions or earthquakes but also ambient noise, or weak seismic waves randomly produced on the surface mainly by large waves in the ocean.

German scientists from the GeoForschungsZentrum, Potsdam, Germany, plan to provide 60 high-quality seismic stations to be installed on Kamchatka volcanoes. Thus, next year a huge seismic network of over 80 modern stations is going to span the Klyuchevskaya volcanoes. The network will allow obtaining top-notch data on this unique natural object.