Whales in a trap

The Kunashir island is located between the Sea of Okhotsk in the north and west, and the Pacific ocean in the south and east. Its warm coastal waters are teeming with life: rich feeding grounds attract not only a variety of birds and pinnipeds, but cetaceans as well: from orcas to the common minke whale, which is one of the smallest baleen whales. However, giants such as sperm whales are uncommon here: to them, shallow waters are a deadly threat. On November 23, 2018, workers of the Kurilskiy nature reserve discovered two sperm whales trapped in shallow waters off the southeastern coast of the Kunashir

“We were on our regular patrol route to the Andreevskiy ranger cabin. During our descent to the Sernovodskiy pass, we noticed something unusual out in the sea, not far from shore. Our first thought was rocks, but where did they come from, the shore is all sand… We stopped and took a closer look. Whales!!! We took pictures and videos…”, – ​Alexandr Yakovlev, the driver and lab assistant of the scientific department of the nature reserve recalled later.

We sent photos and videos of the backs, fins, and most importantly, the fountains of the whales to cetacean experts. We learned that we were dealing with sperm whales – ​a deepwater species reaching a weight of 50 tons and length of 25 meters. But how did these giants end up here, in a shallow strait? 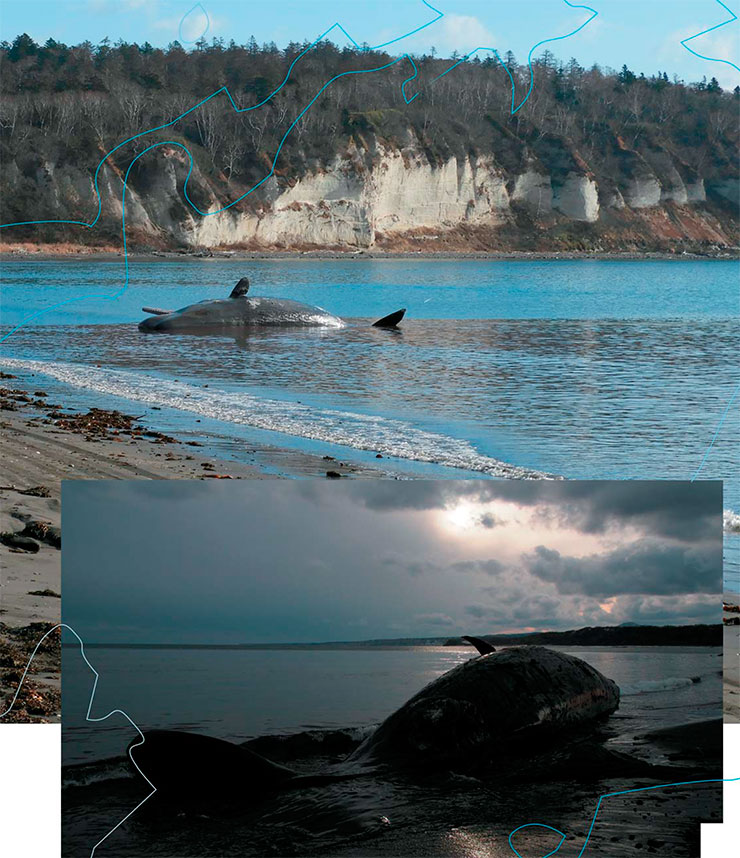 The sperm whale is a marine mammal and the largest representative of toothed whales. Like other members of its family, the sperm whale is a predator. Its diet is based on squid and octopuses: an adult whale can consume up to one ton of these gastropod molluscs in one day. Sperm whales will dive to depth of several hundred meters in their search for prey.
These whales inhabit almost the whole World ocean, but prefer to stay far from shore; their movements depend on the time of year and on gastropod migrations. Sperm whales live in groups up to several hundred individuals. In Russian waters, they are mostly encountered in the waters of the Pacific, as well as in the Barents and Okhotsk seas


Our first thought was, was there anything we could do to help? Unfortunately, man is helpless in such situations. Whales are enormous, nothing can move them. A big vessel couldn’t approach them because of the shallow waters, and reaching them from a smaller boat could be dangerous to the rescuers. Their destiny was decided. The only thing left to us was to watch.

The whales fought for their lives for a whole day, trying to turn towards the ocean… the next day, Alexandr came to the Tofitskiy road only to discover two lifeless bodies 100 meters from the shore. The animals became helpless in the shallow waters and were crushed by many tons of their own weight. 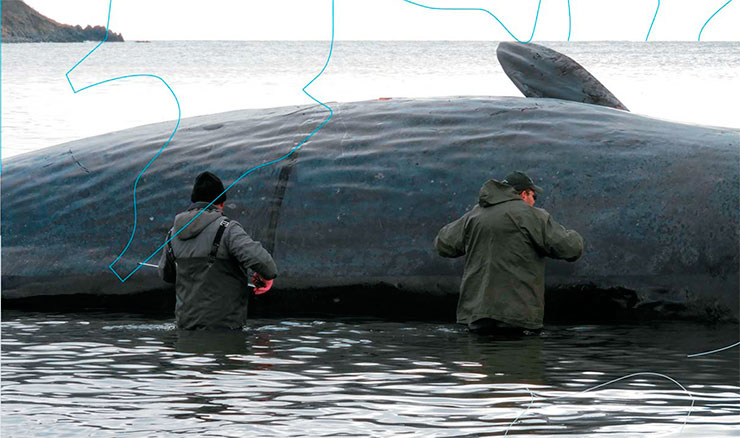 It’s impossible to hold back tears at such a sight… but one must contain their emotions and carry on. For science, sperm whale carcasses are a rare and valuable find, and it is necessary to do everything by the rule, as prescribed in such cases: take tissue samples for histology and teeth for aging.

We were only able to take biological samples (of skin, blubber, and muscle) several days after the whales’ death, when we were finally able to approach the carcasses from the shore. We were taking measurements, standing knee-deep in water that was red from the blood, when an actual explosion happened: one of the whale’s chest cavity burst open, and all intestines floated to the surface, accompanied with a fountain of blood. What a grizzly sight! 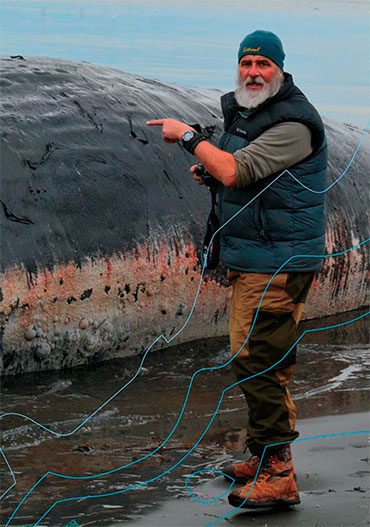 The beaching of the whales on the Kunashir became a sensation among marine theriologists. Everything had to be scrutinized to establish the causes of their death, and this required an expert. Peter van Der Volf, the scientific adviser of Sakhalin Energy, a major expert on marine mammals, who has been living on Sakhalin for 15 years studying the gray whale population of the Okhotsk Sea, volunteered to help.

A real viking – ​almost two meters tall, with a gray beard – ​hopped the first flight to Kunashir following our invitation, hauling 30 kilograms of equipment. The scientist wanted to know what was in the whales’ stomachs, as it could shed light upon the causes of the tragedy: in his experience, there were cases when whales died after ingesting plastics and other industrial garbage. He was not new to whale necropsy, and our task consisted in providing the necessities for his job and assisting him in all possible ways.

There are no significant low tides in the fall, and our time to approach the whales was limited. The process is not easy to describe. Perhaps, only medical professionals, biologists, and nature reserve workers can handle that – ​people who understand that this is the only way to acquire the necessary knowledge about the life and death of these giants of the sea.

…We muted the stench of rotting flesh with essential oils. We rubbed everything with antiseptic wipes, because there was a risk of infection the whales could possibly have succumbed to. We burned used gloves, wipes, and suits on the spot. In the evening, we washed off the permeating blubber, sharpened our knives, and made plans for the following workday.

“The locals were very curious about the dead whales and approached the bodies. “Poor fish!” – said road construction workers who were watching us work. We tried to restore the truth by explaining whales were mammals and not fish, like we’ve all been taught in school. “Yeah, we know they breastfeed… but still… poor fish!”. This does not really matter; what matters is the sincere empathy to the mighty living beings that died following a series of tragic coincidences...”

The four of us worked together, and each of us had their own task. I still admire our men, who spent half a day in very cold water in rubber boots, doing a difficult job. I filmed everything, took notes and small samples, handed out tools and stayed “clean”.

In the end, we decided to work through the night, because the weather was getting worse and the carcasses were becoming rough from the sea water – ​the opportunities to reach the truth, that is, the stomach, were diminishing quickly. Moreover, this is the time of day with the lowest tides. We were able to collect the necessary samples and examine contents of the the stomach of one of the whales, which turned out to be full of squid beaks – ​squids are the main food of sperm whales. 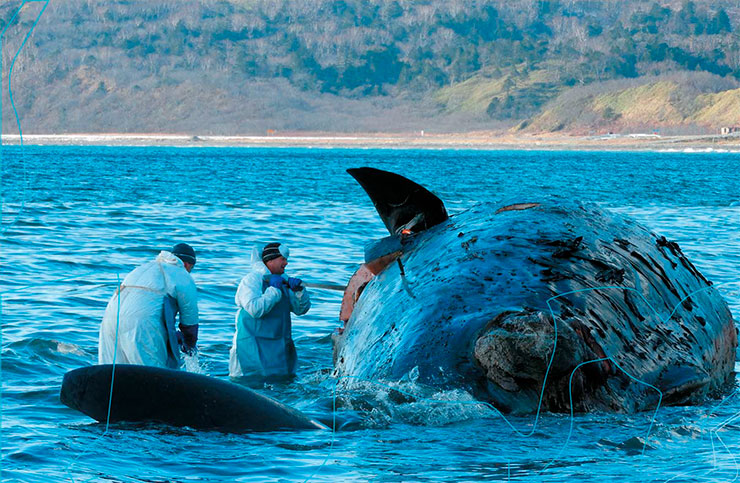 It snowed for the first time that night. We ended working at about 1 a. m. – ​Peter decided it would do for the day, and that everything possible had been done. Still, we stood around the fire for a long time afterwards, talking about what we had accomplished. Snow was slowly covering the enormous black bodies behind our backs with a white mourning veil…

Examination showed that the dead whales were young, robust males. The possible cause of death was hydraulic shock, which steered them off their migration path. This could be due to explosions during military exercises, or the earthquake that had occurred a week earlier in the Yekaterina strait between the islands of Iturup and Kunashir. Sperm whales are extremely sensitive to loud noises, which can desorient them. These whales are very social and usually follow each other: this is how two adult individuals both ended up in dire straits and perished. 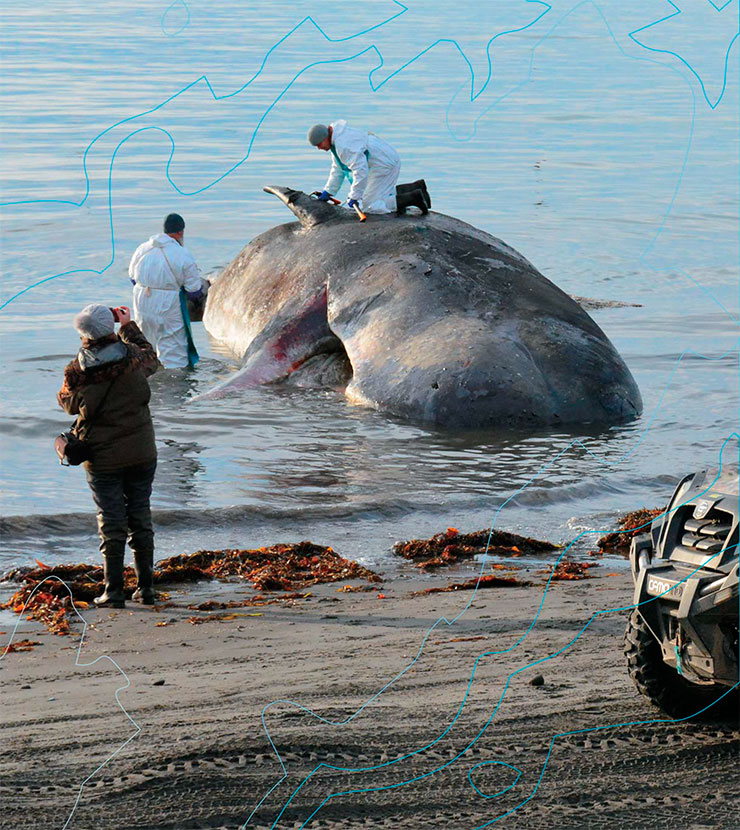 It is known that only male sperm whales travel so far up north; the females and calves stay in warm waters of the Southern Hemisphere. This is confirmed by two recent finds of dead sperm whales in 2021 – ​on the Shikotan and Kunashir islands. In June, 2022, another dead male sperm whale was found on the Kunashir exactly at the same spot.

However, all these carcasses were strongly decomposed and necropsies were not performed; samples were taken only from the last male. Judging by the condition of his teeth, he had lived a long life and may have died of old age, and his body was brought to the Kurils by the sea currents. 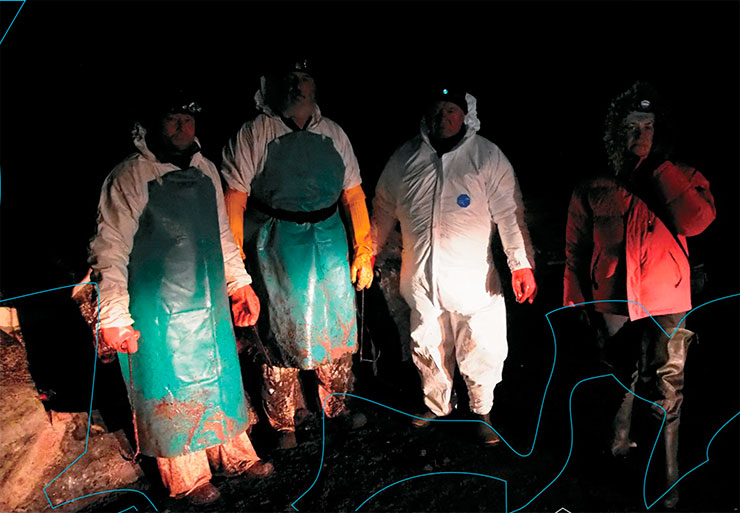 One of the positive results of our whale saga is the experience of working with Peter van der Volf, both an outstanding expert and a wonderful person. Working with people like Peter and getting new knowledge first hand is one of the huge advantages of being a part of the nature reserve team. 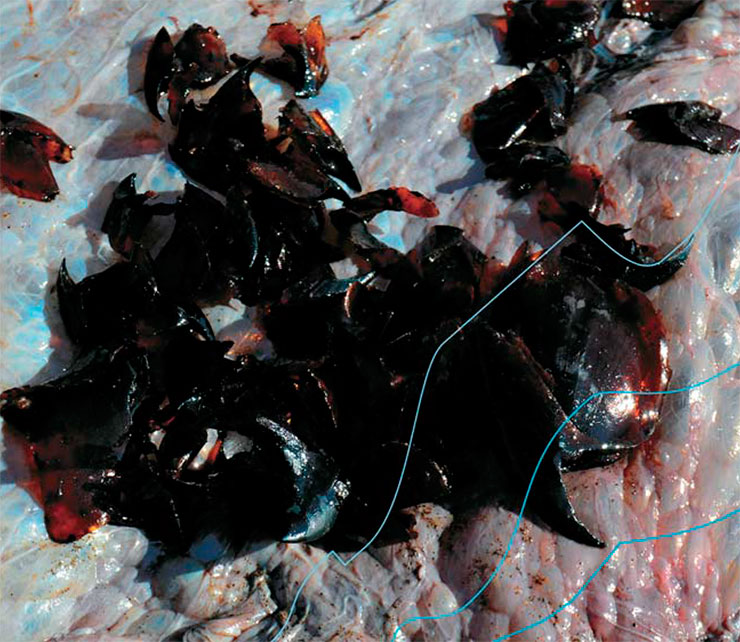 Our main achievement is that we were able to collect invaluable research materials which will be studied in a variety of ways, including molecular genetic methods, in the Severtsov Institute of Ecology and Evolution RAS in Moscow and in the Kamchatka Branch of the Pacific Institute of Geography FED RAS.