Previous
All news
Next
4627

The well-known astronomer Vladimir G. Surdin, Senior Researcher at the Sternberg Astronomical Institute (Moscow) and Assistant Professor at the Physics Department of Moscow State University; author of the course "Astronomy for Physicists" at Novosibirsk State University; winner of the "Prosvetitel" (Rus. 'Enlightener') Award (Russia, 2012 and 2015) speaks about the future collision between our Milky Way galaxy and the nearby Andromeda galaxy.

Astronomers have predicted the fate of our galaxy, the Milky Way: it will collide with the nearby Andromeda Nebula. For billions of years, these two giants have peacefully coexisted in the Local Group of galaxies, which includes more than fifty stellar systems of all sizes. The two galaxies have been the key members of the Local Group: Andromeda ranked first, followed by the Milky Way, whose mass is only a little more than a half of that of Andromeda. Each of them occasionally devoured on the minor members of the group to gradually increase in size and mass. Admittedly, this happens in any group of galaxies... and not only galaxies! Astronomers are fed up with the vulgar jokes that “The rich get richer and the poor get poorer” and “The strong eat the weak.” However, the near future (on the astronomical time scale) is going to see two of the strong—the Galaxy and Andromeda—come face to face. What implications will this collision have for us living on the Earth?

It is safe to say that there were no close encounters between the Galaxy and Andromeda in the past. Both of them are spiral stellar systems with thin dense discs, which certainly would have lost their flat shape, had there been a close encounter of these two massive systems. During their long history, each of the systems was repeatedly hit by smaller galaxies, but they have never approached each other closely. Now the distance between us and Andromeda is about 780 kiloparsecs (about 2.5 million light-years), which would be sufficient for them to coexist peacefully for centuries if the two galaxies were moving relative to each other in more or less circular orbits with no signs of a close encounter. However, about 100 years ago, astronomers measured the spectra of stars in Andromeda and found from the shift of their spectral lines (Doppler effect) that Andromeda was moving towards us, i.e., towards the Solar System, at a speed of 300 km/s. In this it differs from all the other large galaxies, which are flying away from us, thus demonstrating the expansion of the Universe. Note that the convergence of some galaxies does not contradict the established expansion of the Universe: the latter concerns gravitationally unbound regions of the Universe; in dense galactic groups, gravity prevents the recession of the galaxies and often leads to collisions.

By the mid-20th century, it became clear that the high speed of the convergence of Andromeda with the Solar System is primarily due to the Solar System's orbital motion around the center of the Galaxy at a speed of about 225 km/s, which is directed approximately towards Andromeda. Thus, the resulting speed of the convergence of our Galaxy with Andromeda is “only” 110 km/s. This speed itself would not be fatal if, in addition to moving towards us, Andromeda also showed quick movement in the perpendicular direction, i.e., moved in an elliptical orbit. In this case convergences would alternate with recessions, as is the case with Halley's comet, which repeatedly falls on the Sun and “misses its target” to go back to the periphery of the Solar System. However, the measurements made using the Hubble Space Telescope in 2002—2010 show that Andromeda is falling on us in almost a straight line and will hardly miss. In 4 billion years, it will pass through the halo of our Galaxy, which will largely slow down its movement, and in another 2 billion years, the two stellar systems will merge into a single conglomerate, which has already been named Milkomeda after the Milky Way and Andromeda. 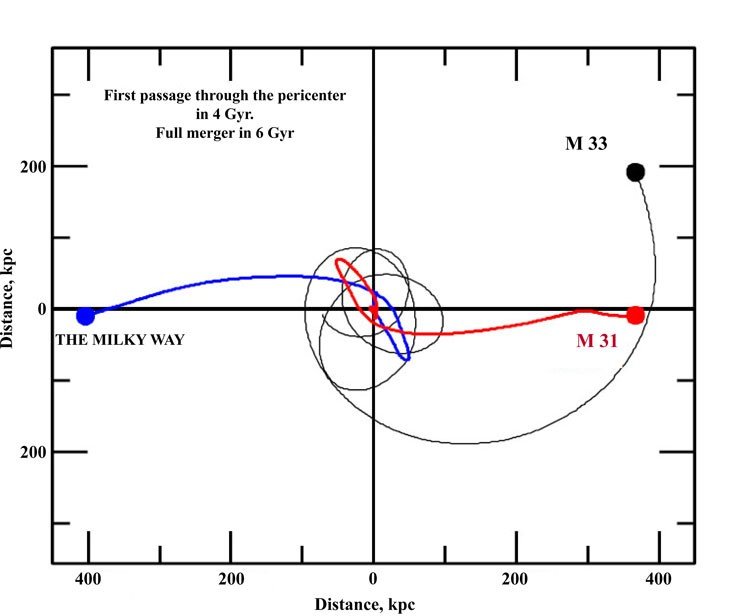 By the way, when we speak of Andromeda falling on us, we are clearly galactocentric: since our Galaxy is less massive, it is heading towards the common center of mass of the Milky Way—Andromeda system at a higher speed. Surely, in Andromeda there must be qualified astronomers who have long known about their doomed fate. So, the Andromedians must be looking in horror at the Galaxy rushing towards them... All joking aside, what implications will the upcoming collision have for us living on the Earth?

It is safe to say that in 4 billion years, the Solar System will have its own problems, much more difficult than the approach of Andromeda. Our Sun, which will have turned into a red giant, will heat up its thermonuclear cauldron so much that the Earth will lose its atmosphere and water shell and, later on, plunge into the solar interior. By that time, we will have to move to the outskirts of the Solar System to watch the great collision of the galaxies. This event will occur against the backdrop of completely new constellations since they are composed of nearby stars and totally change their patterns every few tens of millions of years. The Milky Way's band will also change gradually in appearance because this is the edge-on disk of our Galaxy, which will be bent by the gravitational attraction to Andromeda. As to Andromeda, it will look much more impressive than today, when only the trained eye of an amateur astronomer can see it in the sky, and only outside the cities.

The great merger will have no particularly disastrous consequences. Stars are scattered in space so rarely that there will be almost no star collisions. However, the merger will interfere with the quiet motion of interstellar gas clouds to increase the frequency of their collisions and, hence, boost the formation of new generations of stars. We can say that the two aged galaxies will be replaced by the rejuvenated Milkomeda.

Being residents of a planetary system, we are, of course, interested in the fate of planets. Even if we find for ourselves a new planetary system at one of the nearby stars, we need to be sure that our new space home will not lose its stability as a result of the galaxy collision. Calculations show that we can rest assured of that with a high degree of probability (although not 100%).

Moreover, some of our distant descendants will be watching the great cosmic drama with great interest and even pleasure. Here I mean my fellow astronomers, who now cannot observe our Galaxy in its entirety because the Solar System is located almost exactly in the central plane of the galactic disk, which is densely filled with opaque dust clouds. The collision with Andromeda will kick out the Solar System and the surrounding stars from their quiet orbits in the galactic plane and distort the galactic disk beyond recognition, and the future astronomers will have a great opportunity to take images of Milkomeda in all its glory. Of course, they will be particularly fascinated by the central region of the united galaxy, where two giant black holes—ours and the even more massive one that is now at the center of Andromeda—will be converging. I wish I could see that...