Metamaterials (in Greek, the word “meta” means “beyond” or “super”) are artificially structured materials with unusual properties not found in natural materials. Today electromagnetic, acoustic, mechanical, seismic, and quantum metamaterials are being developed.

Application of electromagnetic metamaterials with a negative refractive index has already improved the parameters of antennas, phased array antennas, polarizers, filters, absorbing coatings (“collapsars”) and nonreflecting coatings. Metamaterials are used to develop fundamentally new devices: superlenses and invisibility cloaks. Results obtained in this field were not only ranked by the Science journal among the ten outstanding achievements of the first decade of the 21st century, but also made a top ten achievement in material science in the last fifty years, according to the Materials Today journal

Electromagnetic properties of conventional materials are determined by the atoms and molecules forming these substances or, specifically, by the manner the electrons in these atoms and molecules interact with electromagnetic waves. In contrast to conventional materials, the building blocks of metamaterials (supermaterials) are artificially created objects of greater size: electromagnetic resonators, usually in the form of metal strips, split rings, or spirals, with sizes appreciably smaller than radiation wavelength. If the frequency of an incident electromagnetic wave is close to the resonant frequency, rather strong currents arise in the resonators; such currents then generate a secondary electromagnetic field amplifying or attenuating the incident wave. As a result, everything in metamaterials is not the same as in conventional materials. The refractive index can take zero or even negative values; the Doppler and Vavilov-Cherenkov effects become inverted. It is possible not only to control the properties of metamaterials, but also to modify these properties dynamically by switching on and off certain resonators, thus changing the resonance conditions. The prospects of unprecedented control of electromagnetic radiation by using such materials stimulate intense activities of a large number of research laboratories all over the world, with approximately 1,000 publications on the topic appearing per year. 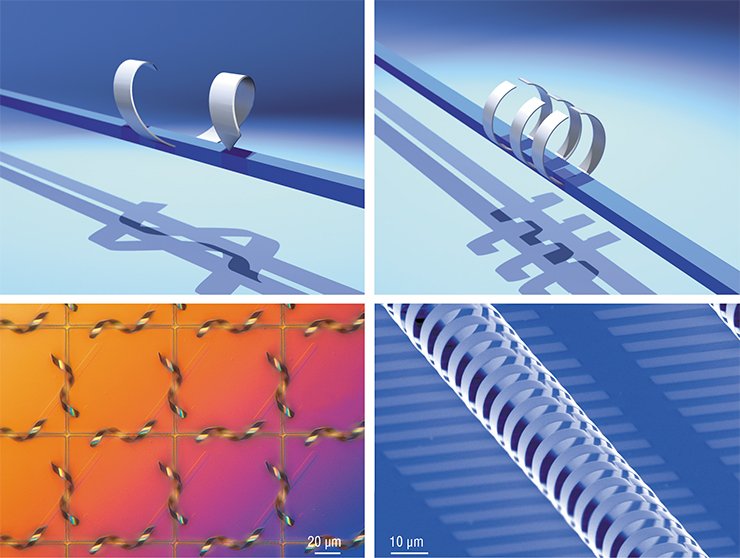 Potential applications of metamaterials cover all areas that involve electromagnetic radiation: from space to medicine. Actually, a new branch of industry is being formed. The U.S. Department of Defence finances more than 120 small enterprises and companies developing tools and devices based on metamaterials (SBIR/STTR program). Metamaterial developers, who work in various countries, have already solved many problems for the terahertz range, where earlier radiation control devices were not available. Revolutionary changes are expected on completion of the development of superlenses with resolution much finer than radiation wavelength, of polarizers, and invisibility cloaks, which make light (owing to special refraction conditions) go around the object surrounded by a metamaterial, thus making the object invisible.

Theoretical fundamentals of electromagnetic metamaterials with a negative refractive index were developed by Russian scientists, first of all, by Prof. V. G. Veselago, who predicted the existence of such metamaterials and described the superlens concept more than 40 (!) years ago. Unfortunately, this outstanding result did not find any applications at that time, which again demonstrated that the strength of Russian science is basic research, while its weakness lies with technology which lacks equipment and interest in new products on the part of industry.

Theoretical investigations are currently continued in Russia by A. N. Lagarkov, A. K. Sarychev, and A. P. Vinogradov (Institute of Theoretical and Applied Electrodynamics of the Russian Academy of Sciences), P. A. Belov (Saint-Petersburg National Research University of Information Technologies, Mechanics, and Optics), and by other scientists.

Practical interest in metamaterials was initiated by Prof. John Pendry (UK) in 2000. In the same year, the American researcher David Smith with his colleagues created negative-index metamaterial in the microwave range. In 2006, John Pendry with his colleagues and Ulf Leonhardt reported the possibility of creating invisibility cloaks, and five months later David Smith and David Schurig created such a cloak operating at the resonant frequency in the microwave range.

The choice of the microwave range was not accidental: in the case of a centimeter wavelength, plane resonators should have a size of approximately one millimeter and can be fabricated without using high technologies.

Significant efforts of researchers all over the world are currently aimed at creating terahertz, infrared, and optical metamaterials and systems, which requires arrays of periodically arranged micrometer- and nanometer-sized resonators. Such activities are almost nonexistent in Russia because of lack of necessary equipment: setups for micro- and nanolithography, systems for precision chemical processing of materials, and measurement tools.

The integrated project that has united the efforts of three research institutes of the Siberian Branch of the Russian Academy of Sciences in the Novosibirsk Academgorodok (Institute of Semiconductor Physics, Institute of Nuclear Physics, and Institute of Inorganic Chemistry) made it possible to develop new terahertz materials surpassing foreign analogs in terms of functional parameters. Three-dimensional instead of two-dimensional resonators were used as individual elements.

Three-dimensional resonators in the form of microspirals made it possible not only to simplify obtaining the negative refractive index and reach the record-beating optical activity of the metamaterial, but also to discover a possibility of dynamic control of material properties. With the thickness of the layer formed by spirals ten times smaller than the wavelength, the plane of polarization of electromagnetic radiation rotates by an angle up to 36°.

It is important that the technology of self-formation of three-dimensional resonators whose size varies from hundreds of microns to several nanometers leads to the creation of isotropic, anisotropic, chiral, magnetic, flexible and non-flexible materials for a wide range of the electromagnetic spectrum: from microwave to optical radiation.

Obviously, in the years to come, we can expect the creation of fundamentally new instruments and devices based on metamaterials whose potential is just at an early stage of investigation.