The Cell: From Maturity to Childhood

For three decades already, scientists have been aware of the fact that early embryonic cells are capable of transforming into any cells of an adult body. However, ethical constraints imposed on the use of embryos have interfered and still interfere with a wide application of such undifferentiated cells in medicine. These limitations of cell technologies were overcome in 2006 with the discovery of a simple method for bringing mature cells of an adult organism back to their “childhood.” This discovery of the decade may suggest that the revolution in medicine is around the corner

At the end of 2011, distinguished scientific and popular journals traditionally closed the year by selecting the most important research advances. This time, the experts of Science, one of the best known and oldest journals, also named ten most prominent scientific insights of the first decade of the 21st century. Given the rapid pace of development of research technologies and tools, it is not surprising that both top ten lists include discoveries in the macro- and microworld: the dark matter of the Universe and the genome’s dark matter; extrasolar planets and fossil DNA; Martian ice and the microbial community inhabiting a human body... This confirms once again that modern science is no longer the lot of a solitary genius but rather an efficient knowledge production industry involving sophisticated equipment, complex infrastructure, and international research teams.

An illustrative example of this trend is the emergence of new scientific fields, such as paleogenetics and paleogenomics. Thus, the joint efforts of archaeologists and molecular biologists, who turned the sequencing of ancient DNA into “mass production,” allowed them to demonstrate that the human fossils discovered in the Altai by Novosibirsk researchers belong to a new hominid species. Coexisting for a long time with modern humans, this newly discovered species left their trace in the gene pool of the contemporary world population.

We asked some well-known Russian scientists to comment on some of the discoveries included into the Top Ten lists by Science. Selection of both the scientific advances and commentators, experts in the respective fields of knowledge, was governed by our desire to demonstrate the state of Russian science and to estimate its prospects in the hottest fields of today’s world research.

We conclude our selection with our own top list of ten most important discoveries in biology and medicine, the disciplines that are most interesting and familiar to a wide range of readers. This rating was prepared by our long-term contributor and science writer, Dr. Dmitry Zharkov, a molecular biologist from the Novosibirsk Institute of Chemical Biology and Fundamental Medicine, Siberian Branch, Russian Academy of Sciences.

There was a time when each of us was just a single cell. It lasted from the moment when a spermatozoid fused with an egg, forming a zygote, until this cell divided into two daughter cells. Then each of these cells divided once more, and again, and again...

Currently each of us has about 50 trillion cells. Some of them conduct nerve impulses, others produce hydrochloric acid in the stomach or insulin in the pancreas, while some form a thick pad beautifying the waistline. Thus, one fertilized egg has generated a multitude of different types of differentiated cells. A zygote is said to be totipotent, i.e. it is able to give rise to any cells, even to those that disappeared long ago from the body of those reading this paper, for example, the cells of the placenta.

Although totipotency is very quickly lost during individual development, embryonic cells at the earliest developmental stages retain pluripotency, that is, the ability to develop into any cells that are generally present in an adult organism. During their further development, embryonic stem cells gradually lose their pluripotency, first turning into multipotent cells (able to give rise to many but not all cells types), then into oligopotent cells (precursors of only several cell types), and so on. Eventually, most cells become terminally differentiated, that is, acquire their final shape and function and cease dividing. An illustrative example of such differentiated cells is erythrocytes, the blood cells that have lost their nucleus. 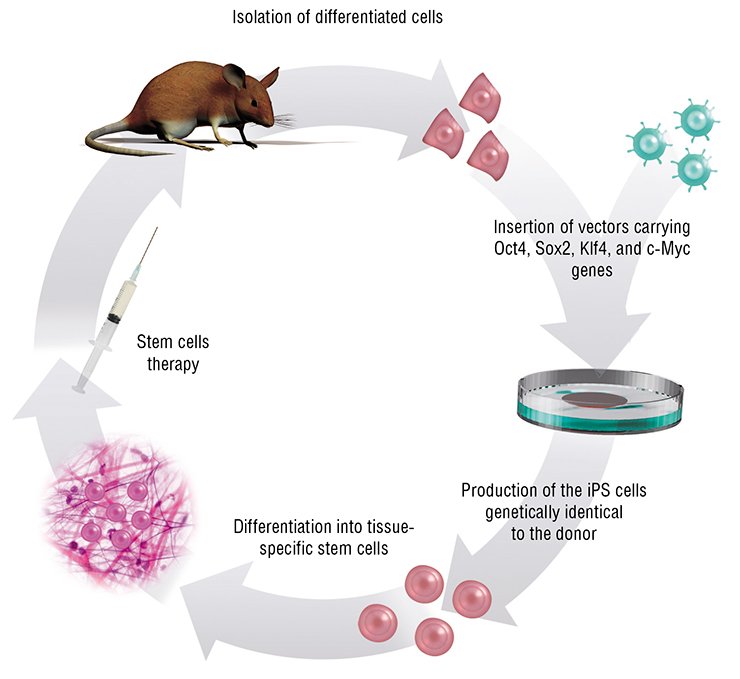 Embryonic stem cells were first isolated from mouse embryos by Martin Evans and Mathew Kaufman at Cambridge in 1981; Evans was later awarded the Nobel Prize for this discovery. However, 17 years had to elapse before James Thompson at the University of Wisconsin, Madison, succeeded in isolating human embryonic stem cells. Shortly thereafter, it became possible to transform embryonic stem cells maintained in culture into cells of almost any type. A revolution in medicine appeared on the horizon: suddenly it became possible to replace cells with inherited defects or the cells that died in infarction, stroke, Parkinson’s or Alzheimer’s disease, spinal cord traumas, diabetes, blindness, and even loss of teeth and hair. 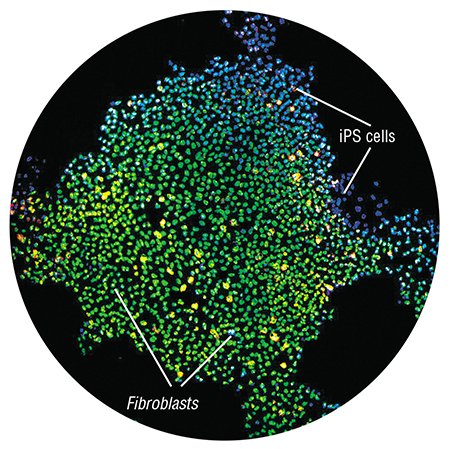 These breathtaking prospects were marred by one unsolved fundamental question, namely, where can embryonic stem cells for an adult patient be obtained? The problem is that they should be genetically identical to the cells of the body; otherwise, the immune system will reject them.

Everything changed in 2006, when Shinya Yamanaka from Kyoto University demonstrated that even terminally differentiated cells could be “reprogrammed” and brought back to their pluripotent state. Such cells are referred to as iPS (induced pluripotent stem) cells.

It turned out that introduction of virus-based genetic constructs carrying only four specific genes is sufficient to reprogram adult cells. The proteins encoded by these genes are the so-called transcription factors, which bind to certain DNA sites in the regulatory regions of other genes, thereby modifying their activity.

The combination of these genes can restore the embryonic potential in almost any cell; however, much less effort is sometimes required to transform one cell type into another. For example, the neuron precursor cells require only one introduced gene to restore their pluripotency, and a pair of other genes can transform a liver cell into a pancreatic cell producing insulin. However, in the majority of cases, it is still a mystery which particular genes change their activity in the cells exposed to these reprogramming factors, altering the very essence of these cells. Later other reprogramming methods were also developed; these methods do not require any viral constructs but rather only proteins, specialized regulatory RwNAs, or other small molecules capable of regulating gene activity.

The main reason why iPS cells attract such close attention (Yamanaka has been awarded all the most prestigious scientific prizes except for the Nobel Prize, which is also most likely to come shortly) is not associated with their most interesting biological features but rather lies with the field of ethics. The point is that pluripotent embryonic stem cells can only be obtained from human embryos at early developmental stages. In the early 2000s, there were fierce debates about whether it would be ethical to clone a patient, produce embryonic stem cells genetically identical to this patient from an embryo, and use them for medical purposes.

There can be different attitudes to the acceptability of such practice and to whether a clump of a hundred of developing cells should be regarded as a human being. Nonetheless, it will still be impossible to bypass the moral issues, whereas a consensus satisfying everybody is, as life shows, unattainable. The discovery of iPS cells has given hope that an “ethically clean” and unlimited source of stem cells appeared or will soon appear. Although at present such cells are not completely analogous to embryonic cells in their properties and carry a risk of cancer development, hardly anybody doubts their most promising future.

Currently, cell reprogramming firmly holds a position in the lists of most promising biomedical technologies. In all probability the scientists studying gene activity regulation may also contribute to this research.

The regulatory processes in the course of cell development are known to be controlled through gene methylation, when specialized enzymes attach the methyl group, CH3, to cytosine, one of the nucleobases forming DNA nucleotides. Only the cytosine adjacent in the DNA strand to another nucleobase, guanine, is subject to methylation. Such DNA fragments are particularly numerous in regulatory regions of genes.

The bulky methyl group is a perfect mark for specialized proteins that bind to methylated DNA and interfere with gene activity. In the cells far advanced in specialization, many genes are methylated and, correspondingly, inactivated just because these cells do not need them anymore.

The chemical bond between the methyl group and DNA is very stable. During cell division the newly synthesized DNA strand is sure to incorporate an unmodified cytosine and methylation at a particular site may disappear in some daughter cells after several division cycles. However, most differentiated cells lose their ability to divide, and in those cells that retain this ability there are enzymes that actively maintain methylation.

But does this mean that methylation is irreversible? The answer is no. Two methods used by cells for an active demethylation were simultaneously discovered in 2009; both of them utilize the DNA repair system *, restoring the nucleic acid that was purposefully damaged by the cell itself!

Researchers from the Group of Biopolymer Interactions at the Institute of Chemical Biology and Fundamental Medicine in Novosibirsk, in collaboration with their colleagues from the University of Paris, are currently involved in the research into gene demethylation processes. It is quite likely that the insight into the DNA repair system will give rise to better methods for cell reprogramming.