Express Analysis: At a Glance

The Moscow Institute of Physics and Technology, with the help of the Lebedev Institute of Precision Mechanics and Computer Engineering of the Russian Academy of Sciences, has created an operational prototype of a portable device for fast contactless determination of the composition of various chemical substances, including those packed into sealed transparent glass or plastic bags. As compared to available similar devices, the new instrument possesses a number of advantages, including small size and low price

The majority of modern methods of molecular identification of substances include a stage of preliminary mechanical and chemical processing of samples. This procedure takes an appreciable time and requires significant financial expenses; moreover, the object examined is often destroyed. So what should be done if the object examined is, for instance, a unique museum piece or a precious stone?

Fortunately, there are “contactless” methods of analysis, which are based on physical methods of studying matter. An undoubted advantage of many such methods is the simplicity of testing, in particular, when special preparation of the sample is not needed.

An important place among nondestructive methods belongs to optical methods. They are based on using the capability of each substance, irradiated by light, to generate an electromagnetic response signal whose spectrum is uniquely determined by the atomic-molecular structure of this substance. Using the resultant spectrum and solving an inverse problem, one can identify substances included into the sample composition examined.

One of the most informative optical methods is the so-called Raman spectroscopy, which is based on the effect of inelastic scattering of light. Such a scattered light signal is usually much (by a factor of millions), weaker than the initial signal but the recent development of powerful lasers and highly sensitive photoelectric detectors made it possible to obtain detailed information about the molecular structure of almost all substances. The intense development of computer technologies, which allow databases of reference spectra to be created and algorithms of comparison and recognition of spectral elements to be developed, is also helpful in solving this problem. 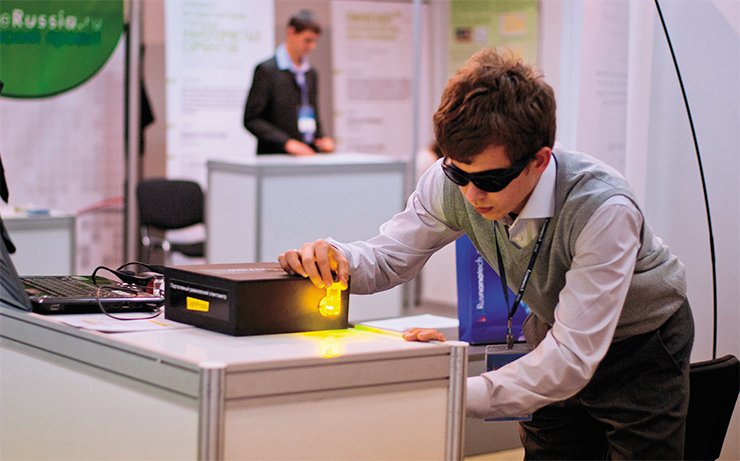 Raman spectroscopy has numerous versatile applications. It is intensely used for monitoring the quality of various products, first of all, in pharmaceutics and chemical (petrochemical) industry. By adding microscopic amounts of special markers, it is possible to encode and then precisely identify the batch number and the release date of a product. The method is successfully used in criminalistics, jewelry, and environmental monitoring for determining pollutants in air, water, soil, and agricultural products. The method can also be used in medicine. It is expected that soon it will be possible to use this method to diagnose diseases by means of a remote analysis of blood markers in the organism, i.e., without taking clinical samples.

There are several domestic and foreign molecular analyzers based on Raman spectroscopy. Most of them are laboratory spectrometers with a built-in source of monochromatic radiation. Such devices ensure rather accurate measurements, but they also have a significant drawback: to identify the spectral signal, the data are transferred to an external computer, which has to interpret the data and convert them to a format adopted for the database for subsequent comparisons. Because of this delay caused by the lack of self-consistency of the analyzer, these devices cannot operate in real time; in addition, they are rather large.

As for the portable devices with built-in additional equipment, they are few and most of them use the method of infrared spectroscopy of absorption, which usually requires preliminary processing of the substance. These portable devices are mainly designed for solving a narrow range of problems, for instance, for monitoring products in terms of their correspondence to a reference sample. Such devices, however, fail to determine unknown species in a mixture of substances. Moreover, the use of such equipment for chemical monitoring is restrained by its high consumer price: today it reaches many hundreds of thousands of rubles (the minimum price of a portable device is RUR 400,000). 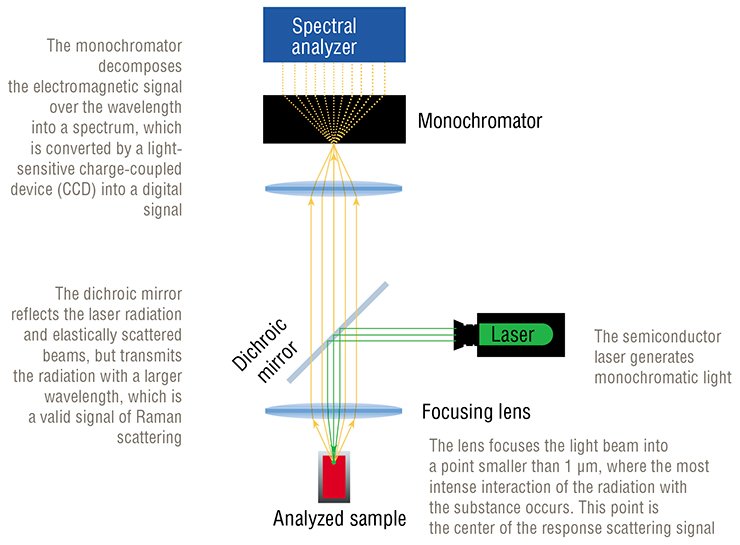 The portable molecular analyzer developed at the Moscow Institute of Physics and Technology with the help of the Lebedev Institute of Precise Mechanics and Computer Engineering of the Russian Academy of Sciences is completely autonomous. A comparatively inexpensive semiconductor laser is used as a built-in source of radiation. Such lasers are small-sized; correspondingly, the analyzer is also small. Other specific features of the analyzer structure, for instance, the use of a dichroic mirror, were also helpful in making the analyzer lighter. Despite the analyzer compactness, its spectral resolution allows correct recognition of the majority of chemical compounds of interest.

SPECTRUM-FINGERPRINT
The phenomenon of elastic (Rayleigh) scattering of light on molecules has been known for a long time. At this type of scattering, the quantum energy and the wavelength remain unchanged. A new effect of inelastic interaction of a liquid quantum with a molecule, where the molecule absorbs some part of the quantum energy, was discovered at the beginning of the 20th century.
The value of energy that the quantum is “deprived” of is not arbitrary: it is equal to the difference between two different energy levels of the molecular state. Thus, in addition to the fundamental line at the source wavelength, the monochromatic radiation scattering spectrum contains weaker additional lines shifted toward the long-wave range of the spectrum.
As each substance has its own specific set of energy levels, the resultant Raman scattering spectrum is unique. Such “fingerprints” can be taken almost for all organic and inorganic chemical compounds in all aggregate states

Spectra obtained with the use of precision equipment are taken as reference spectra. The accuracy of optical identification of substances, however, largely depends on the algorithms of computer processing of the signal. The new analyzer involves a recognition algorithm based on the so-called wavelet analysis, i.e., spectrum decomposition into special non-periodic basis functions, which are constrained in terms of their amplitude and frequency. This method of data processing is implemented in a specialized computational device directly built into the analyzer, which ensures significant reduction of the identification time.

The new analyzer was successfully tested under laboratory conditions with different types of illumination: two variants of artificial illumination, natural daylight, and in a dark room. The duration of the full analytical cycle was less than 2 seconds.

The competitive advantages of the new molecular analyzer with a “speaking” name LightProbe are obvious. It is really compact: its weight with all built-in equipment is only 1.9 kg (among commercial tools, only the American EnSpectr R532 has a similar weight, but it has to be connected to an external computer). As for the price of the new analyzer, it is lower than that of its analogs offered in the market by an order of magnitude. Even for analyzers fabricated in accordance with customer’s design, the price is expected to be within RUR 70,000. The price can be appreciably lower in the case of small-batch production.

So far we have been discussing a unique analyzer. Using this analyzer as a basis, however, it is possible to design simpler devices for recognition of substances from a particular group of interest for the customer, for instance, medical products. In the case of batch production, the price of such devices will be approximately RUR 25,000. For comparison, the TruScan analyzer produced by the American company Ahura, which is one of the leaders among portable devices and the closest competitor of LightProbe, is 50 times more expensive.

Owing to its advantages, the new device can be implemented in various fields of human activities. Owing to the unique hardware and software developments, it can ensure real-time recognition of substances, which means that the so-called “computer vision systems” can be improved. Currently, robots can perform a remote visual analysis of objects (measure their sizes, determine their topology, analyze their colors, etc.). In the future, robots will also be able to determine the qualitative and quantitative chemical composition of these objects “at a glance.”

Additional application prospects derive from the possibility of analyzing substances packed into transparent glass or plastic bags. For instance, it is possible to make a system of nondestructive industrial monitoring, which would allow the fabricated products to be sorted directly on the belt. In addition, owing to its portability and fast response, such an analyzer is a perfect tool for field conditions.

The photographs were kindly presented by A. Dukovskii (MIPT, Moscow)

Moscow Institute of Physics and Technology

Moscow Institute of Physics and Technology