The Tolbachinskiy volcano, or Tolbachik, has a very peculiar geochemistry. This peculiarity manifests itself primarily in the unusually high potassium content of its eruptive rocks: its basalts contain up to 4 percent of potassium oxide (К2О). Such values are not only maximal for the Kamchatka peninsula – ​they are among the highest of all island arc volcanoes formed as the result of subductions (the eruptive rocks of the South American Cordilleras show similar values)

It is known that high potassium contents are typical for plume eruption lavas. Without exceptions, all plume rocks, from alkaline to normal basalts, are saturated with potassium and other elements of the first group, and cesium in particular. In plume eruptions, the potassium originates deep below the Earth surface: it comes from the metallic core of the planet, which apparently contains a lot of cesium. However, all eruptions on island arcs are usually sodic. 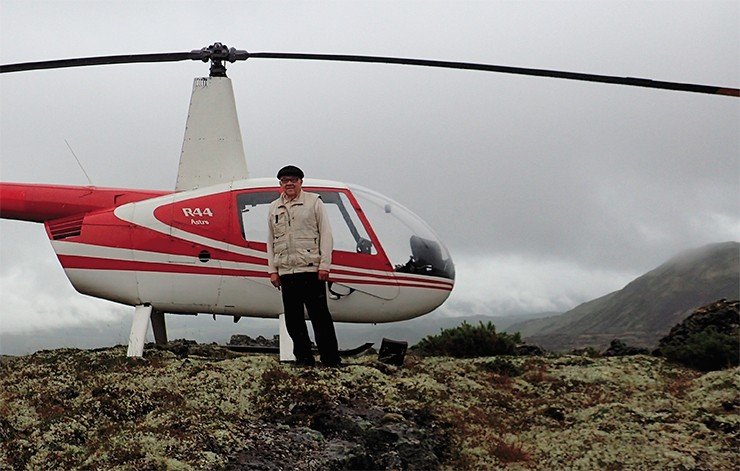 I must stress the importance of the issue of the sodium-potassium ratio in rocks. A property of global geochemistry is that the continental crust is potassic, while marine and oceanic crust is sodic, because sea water itself contains a lot of sodium, and potassium, while present, is very scarce. Nevertheless, in case of Tolbachik, we are dealing with highly potassic rocks, even though the volcanoes of the Kamchatka peninsula are powered by the submersion of the Pacific lithosphere plate beneath the Okhotsk Sea lithosphere plate. The Tolbachik rocks also contain a lot of cesium, because the content rates of K and Cs in erupted lavas are always connected.

***
The expedition of the Russian Geographic Society of 1908—1910, funded by the merchant F. P. Ryabushinskiy, played an important role in the study of volcanic formations and volcanic activity on the Kamchatka peninsula. The expedition team consisted of two equally important groups: the geologist S. A. Konradi and a student of the Mining Institute, N. G. Kell, the maternal grandfather of the academician N. L. Dobretsov, were members of one of the groups. The expedition team spent about 2.5 years on Kamchatka, with 1.5 years devoted to pure fieldwork (Viter, 2008).
Nikolay Kell, the future corresponding member of the USSR Academy fo Sciences, took part in the Kamchatkan Expedition as a topographer. According to Konradi, “he made the first map of the Kamchatkan volcanoes, using the novelty phototheodolite method of surveying”. Upon his return from the expedition, he busied himself with calculations and continued until 1917, later returning to them briefly in 1919 when he was elected rector of the Ural Mining Institute. In 1922, with support from the Russian Geographic Society, he began working on the map (Kell, 1925).
In 1926, Kell brilliantly completed the work initiated by the geological expedition on Kamchatka: he prepared a map of Kamchatkan volcanoes for the III Pan-Pacific Congress, which was later published by the RGS in 1928. In the conclusion of his explanatory notes, he writes: “Working on Kamchatka, with the ascent to the tops of volcanoes with their broad horizons, has become an abiding memory… The feeling of joy that grows and swells in your chest when you climb a mountain on a cloudless day and an amazing boundless panorama opens before your eyes… Unwittingly, you find yourself at the top of the human spirit as everything becomes so clear and simple that you forgive everything and exclaim, double-entendre, the poet’s words: “those who have ascended see all beneath”…” (Kell, 1928).
In the early 1930-s, Yu. N . Kell, the daughter of N. Kell, a postgraduate student at the time, and Leontiy Dobretsov, a young yet already prominent physicist, the father of Nikolay Dobretsov, took part in the Avachu expeditions. Eventually Nikolay also came to work on Kamchatka in 1964–1966 and 2012–2016; in the 1980’s, Yu. Dobretsova, the daughter of his older brother, worked in the Volcanology Institute of the Far East Branch of the USSR Academy of Sciences. All in all, four generations of Kells and Dobretsovs have worked on Kamchatka since the beginning of the XX century, and there is hope that this tradition will live on.
Based on (Tolbachik fissure eruption..., 2017)


The potassium vs. sodium problem has come into light only recently, and there is hope that Tolbachik can be instrumental in solving it. In our monograph, which was one of the reasons for writing this article, we provide our REFC model, which is a system of equations describing the evolution of the contents of magmatic chambers. In a nutshell, the volcanic structure contains several magmatic chambers, which constantly exchange matter. Changes in a incumbent chamber are always connected with changes in another, a more subjacent chamber, to such an extent that five consecutive chambers can function as a single flowing column – ​and this is exactly the process we observe in Tolbachik. Such systems can create a range or unusual geochemical features, including the formation of high-potassium alkaline magmatic rocks, which are not normally typical for subduction eruptions. 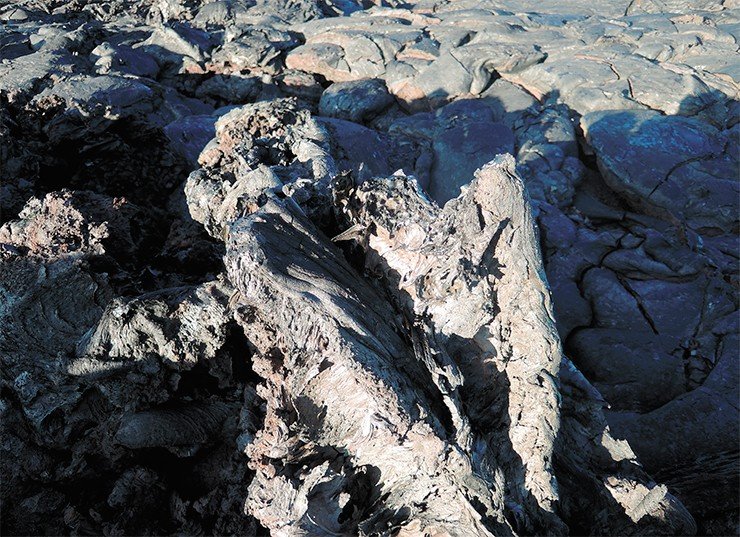 Apart from their high content of potassium and cesium, Tolbachik’s lavas and their associated hot gaseous eruptions of fumaroles and solfataras (smaller orifices and cracks in the crater and cooling lava streams of the volcano) contain mercury and a lot of sulfates. This is the effect of of imposing low-temperature, low-depth geothermal processes, which is very typical for island arc volcanoes (the caldera of Uzon, a Kamchatka volcano, with its powerful gaseous hydrothermal springs, is a bright example).

The discovery of over ten new, previously unknown minerals by the Moscow State University geologists was widely covered in the media. To be more precise, most of these minerals owe their existence to low-temperature geothermal activity. Such minerals can be “trapped” at the exit vents of volcanic gases in fumaroles, however, they deteriorate quickly as the result of dissolving and oxidation. In this sense, Tolbachik is unique because of its accessibility, which provides the researchers with a unique chance to study these processes “live” directly during eruption. 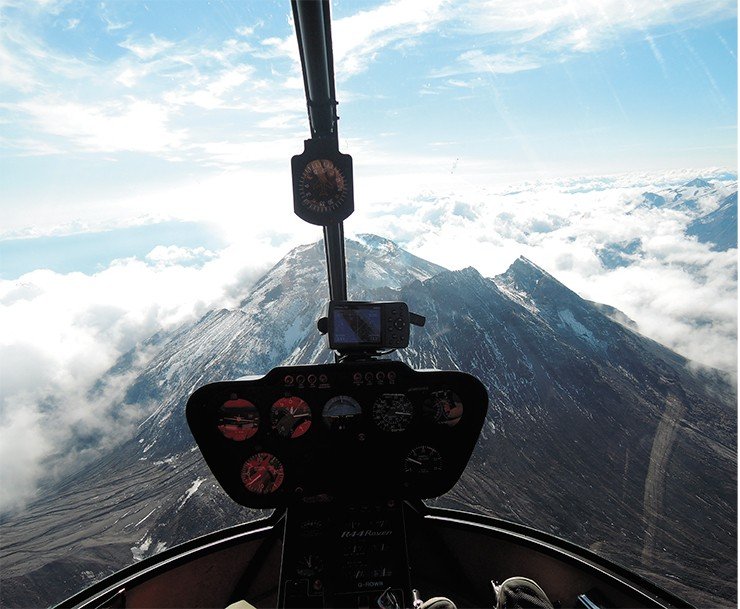 Nowadays, geologists discover dozens of new minerals every year, and only a few are a product of deep magmatic processes. New discoveries originate not only from studying the modern volcanism, but also from the study of xenoliths – ​fragments of rocks carried out by the magma from the upper layers of the mantle. Novosibirsk scientists contributed to the “piggy bank” of new mineral discoveries, too. V. N. Vasilyev is known for his works on hydrothermal and ore-bearing minerals; academician N. V. Sobolev and his followers discovered about twenty new minerals in the overpressured diamond-bearing gneisses of the Kokchetau belt and in kimberlies (both in deep-lying xenoliths and as inclusions in diamonds). These discoveries were made together with specialists from Japan and Singapore, who have cutting-edge methods of fine study at their disposal, since these minerals are normally present as inclusions too small to be seen in a light microscope.

The eruption of the Ploskiy Tolbachik volcano in 2012–2013 provided the researchers with an immense volume of observation data recorded using a variety of geological and geophysical methods. The processing and analysis of these observations as well as understanding the results will take a long time and will help to improve our understanding of the physics behind major volcanic eruptions and develop new approaches to monitoring volcanic activity (Tolbachik fissure eruption..., 2017, p. 5)

Returning to Tolbachik, we must mention another geochemical peculiarity, which almost made it to the headlines. It is the association of native metals and micro-diamonds discovered during the study of the lavas from the most recent eruptions. A number of specialists, including myself, are sure that this is a case of regular industrial pollution. This is confirmed by the list of the discovered substances, which includes the Russian-made duraluminium, latten brass and other artificial metallic alloys. All this “wealth” is a part of the atmospheric aerosol, which can stay in the air for years. It is possible that these particles ended up in the lava together with volcanic ash after a big typhoon.

A lot of this industrial dust, containing nanoscale diamonds, is entering the atmosphere from continental China, which is the major producer of industrial diamonds, including abrasion diamonds. Climate changes alters winds, which are now carrying this dust to the Kamchatka peninsula and the Sea of Okhotsk. The last eruption of the Tolbachik is yet another reminder of the importance of studying the processes governing the global atmospheric transfer. 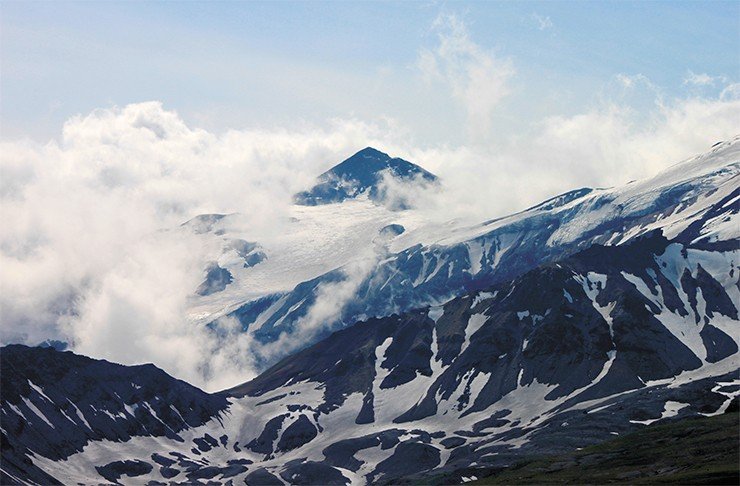 To conclude, I will remind that volcanism is the major factor of ore formation, and subduction favors the formation of deposits of a number of elements, including gold, silver, copper and molly, as well as a number of polymetallic ores. Volcanic ore deposits may not be massive, they often have very high, or even hurricane concentrations of elements. Moreover, in terms of geology such deposits form relatively quickly – ​in less than a million years.

There are fairly large deposits of gold and silver on the Kamchatka, as well as smaller deposits of copper and molly. Deposits of tellurium, copper and silver minerals were discovered right in the orifice of the Kudryavyi volcano in the Kurils. In the Ural Mountains, which are essentially an ancient island arc, there are deposits of copper, lead and zinc. These ancient volcanoes provided the metal for guns and bullets of Peter the Great’s army – ​and for the first industrial revolution in Russia. The Demidovs, a dynasty of eminent Russian merchants, developed these ore deposits and founded the first Russian scientific award, which still exists nowadays: a number of Siberian geologists have received it, including the academicians M. N. Kuzmin, A. E. Kontorovich and N. L. Dobretsov.