When we were little, we dreamed about traveling and read adventure books about pirates, uninhabited islands, lost cities, forgotten civilizations... One of the most mysterious places of which I knew from my childhood but never hoped to see was the city of Petra, cut in rocks and for centuries inaccessible for strangers.

Concealed in a mountain range, this astounding city, the capital of the ancient mysterious state of Nabataea, is situated on the territory of modern Jordan. For many centuries nobody came there, and the city was mentioned only in ancient manuscripts. When the capital of Nabataea buried in sands was discovered, a series of wars erupted in the Middle East. Foreigners got their chance to see Petra in 1991, and recently tourists from Russia have joined them

In Greek the word “Petra” means “rock”. In the old days the city, which is indeed carved in rocks, was the capital of a vast country, the territory of which stretched from the south of modern Syria to the Sinai Peninsula and modern Saudi Arabia, taking a part of Israel. It is believed that the first inhabitants, the Edomites, appeared there at least four millennia ago. Later they mixed with the Arab tribes who had conquered extensive territories by that time. That is how the country with a quite special culture was formed in the 5th–2nd centuries B.C.

First Nabataea as a large state with the capital in Petra was mentioned in Bibliotheca Historia by Diodorus Siculus (the 1st century B.C.). The Nabataeans left not many of their own written documents. Only in the 1950s-60s in the caves near the Dead Sea the Nabataean business documentation was discovered, which was written in one of the variants of the Aramaic language. That is why our knowledge of the people and their lifestyle is scarce.

For about four centuries the Nabataeans owned vast lands in the Middle East. They were known for their belligerence. The fact that the state managed to keep its independence even after the campaigns of Alexander the Great is evidence in itself. There are descriptions of the Nabataeans fighting with the Greek army led by Antigonus I, who managed to conquer Petra for some time. But the Greeks celebrated their victory for just a few days, for very soon their detachment was completely destroyed. For a long time this story discouraged the surrounding countries from fighting with the freedom-loving people.

Petra was at the intersection of the caravan routes, which brought it high profits from trade. The trade connections of the Nabataean kingdom were quite wide. They controlled the trade between Arabia and Syria. The city was a center of spice trade. The Nabataeans sold asphalt to Egypt where it was used for embalming. In the ancient Chinese written documents Petra is mentioned as one of the terminals of the Silk Road. It is also known that the Nabataean communities with their temples existed even on the territory of Italy, and the coins picturing kings and queens of Nabataea can still be found far from Jordan. 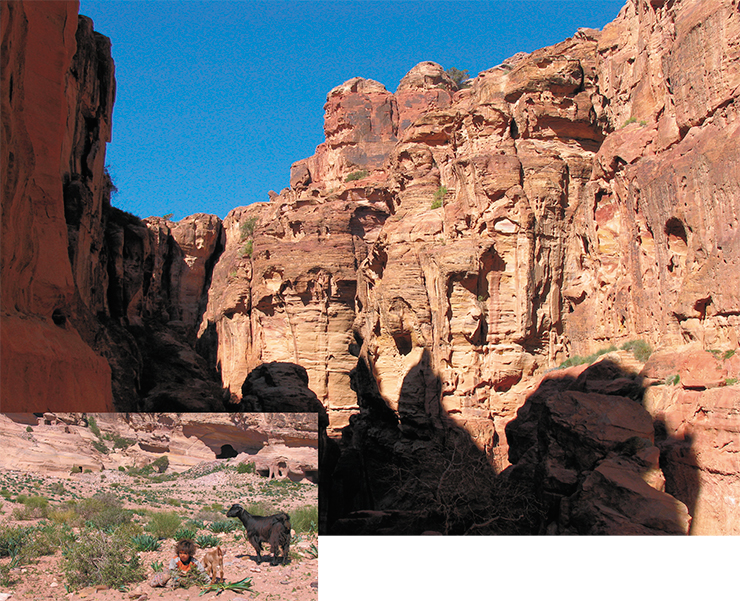 The capital of Nabataea was well fortified and had remarkable hydraulic works, which allowed them to accumulate winter flood water and to make large stocks of drinking water in underground cisterns. Trade caravans traveled for weeks in deserts, from one well to another, fighting off numerous gangs of robbers. The natural fortress of Petra was the place where they could stay safe, have some rest in the cool of ravines without feeling hungry or thirsty, make trade deals... The city was expanding and getting richer. The peak of its power fell on 2nd–1st centuries B. C., when the population of Petra was about 30,000.

The Nabataeans had slaves, though a slave could be freed. The social position of a person, that is, a slave or a freed person, was always added to the name. The status of a person was determined by his richness: the rich were respected, and the broken were despised.

The first king of the Nabataean state, Haritha I, a prominent leader and commander, who was enthroned in 169 B. C., was known in Europe as Aretas, which is the Greek form of his name. After the death of the last king of Nabataea in 106 A. D., the country lost its independence and became part of the Roman province Arabia. The loss of independence marked the decline of the formerly rich and prosperous state. The Romans sent their caravans by other routes, actively using the sea route for delivering goods from South Arabia. Once fabulously rich, the city slowly began to fall into decay. 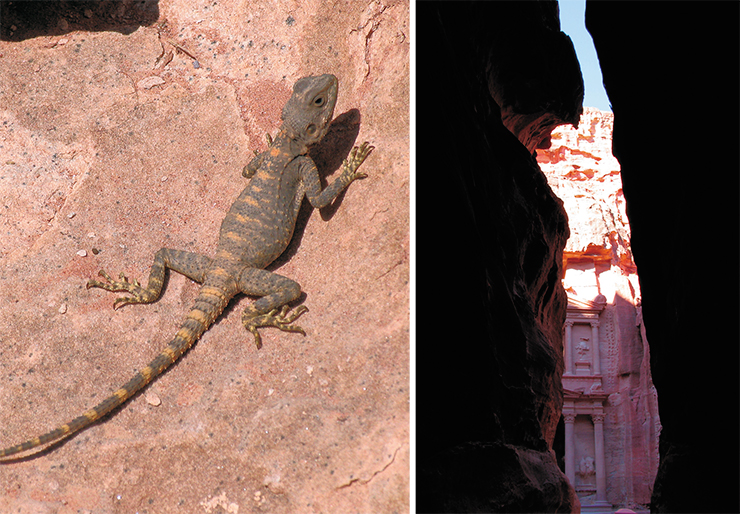 Two strong earthquakes played a tragic role in the history of Petra, in 363 and 747 A. D. The city depopulated after the earthquakes was visited by nomadic Arabs alone. In 1101 A. D. crusaders came to Petra, who built two fortresses on the territory of the city. Then they also left, and the canals and cisterns got stuffed with sand... Petra became waterless, just as the surrounding desolate mountains. The city disappeared for centuries from the medieval maps. The Europeans sometimes recollected the mysterious eastern city, but the area around Petra was inaccessible, for it was guarded by the belligerent Bedouins who hoped to find the lost treasures of the rich city in its ruins. For many centuries dust storms were burying the majestic buildings, and winter downpours flooded the hydraulic works.

Many travelers, who knew about Petra from written documents, tried to find the city but failed. Only Johann Ludwig Burckhardt, a Swiss, managed to solve the difficult problem. In 1812, the traveler, who perfectly spoke the eastern languages, posing as a Moslem, managed to persuade a Bedouin to take him to Aaron’s tomb on a mountain top. That is how the lost city whose buildings had already been buried in sands to three quarters was found. Petra began its life anew. 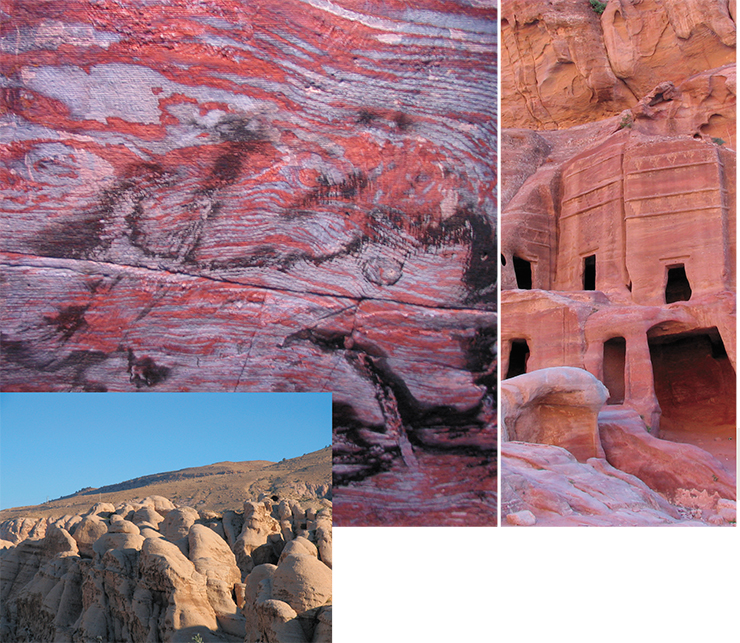 Even though the earthquakes ruined Petra’s houses and the central enormous temple in the valley, the cataclysms spared the facades and tombs carved in the surrounding rocks.

Hundreds of thousands of cubic meters of ground were removed. The city was partially freed from under the sands, which brought to light buildings and an enormous necropolis, in total more than 800 edifices including tombs. The Nabataeans, who believed in afterlife, put their things, food and jewelry in the tombs. Unfortunately, the majority of the tombs were ransacked in the ancient times.

Completely hidden in the mountains, the city is situated in a desert region. Depending on time of day the surrounding mountains are colored marvelous purple, pink, dark red, or orange. It is not easy to find the entrance to the city. The way leads through Siq, a narrow meandering crevice in the rock wall of Nubian sandstone. A brook eroded the soft colored stone and, as a result, formed an almost kilometer-long twisting canyon, ninety meters deep and just a few meters wide. Narrow and winding, Siq was the main obstacle for the enemies: it was next to impossible to attack Petra through this gate in the rocks. 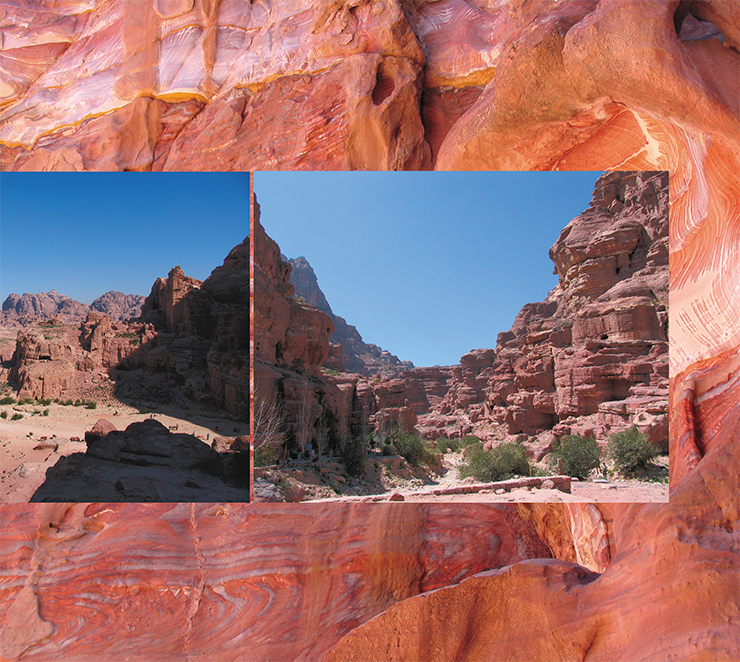 The walls of Siq still keep fragments of the canals carved in sandstone for water delivery. Water for household needs flowed by the stone sluice. There were ceramic pipes in the sluice for drinking water.

Down the gorge with colored walls we come to a square and approach the large facade of a red-brownish building, a symbol of today’s Jordan. This rock construction carved in the 1st century A. D. is called a temple or a treasury building; however, in reality it is the tomb of one of the Nabataean kings. It is remarkable that the modern names of Petra’s buildings have no historical grounds whatsoever. They were invented by Bedouins, who did not know history and thought that Petra was built by the Egyptians. That is why they made up such names as “Pharaoh’s Treasury”, “Castle of Pharaoh’s Daughter”, etc. that sound odd to a historian.

By the way, it was in the Treasury where one of the famous films about Indiana Jones’ adventures was shot. In the film, endless underground mazes were hidden behind the rock facade. In reality it is not that intriguing: behind the impressive entrance there are just a few easily accessible rooms. However, during excavations a stair going down was dug out. Maybe, there are still some underground quarters. 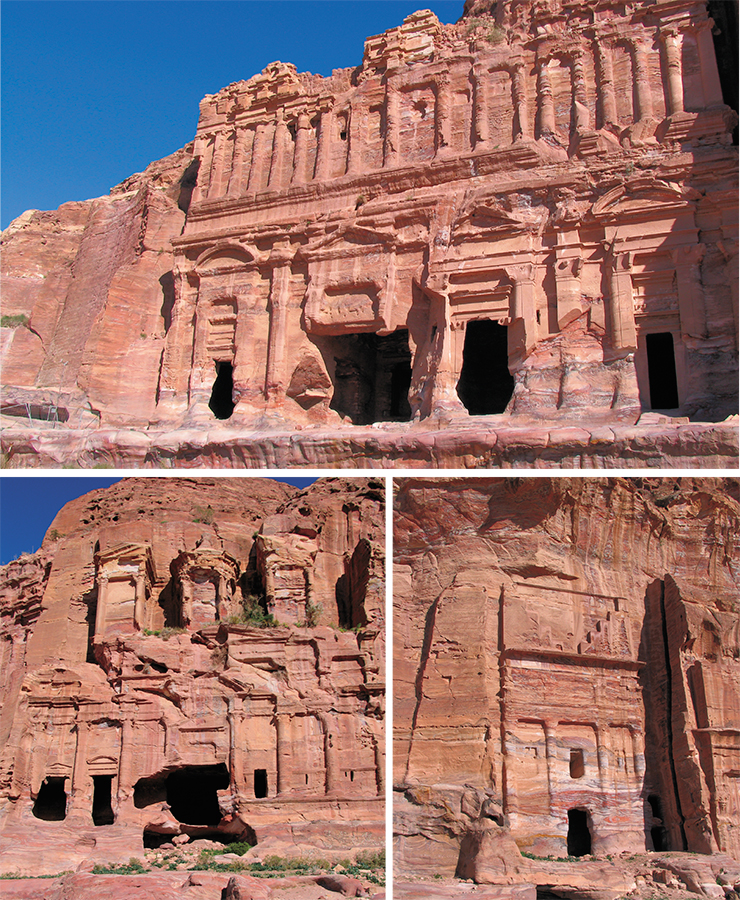 Four meters of sand on the square in front of the Treasury hide more than ten cultural layers. Now, during the day groups of tourists walk the square, camels, half-asleep, always chewing, lie on the stones, and Bedouins offer their unpretentious souvenirs. In the night the square is empty, save the holidays, when there are shows for tourists.

After the Treasury the gorge widens and leads to a large square called the “Square of Facades”. In the framing rock walls there are numerous tombs, forty-four of which share one facade. A theater seating 8.5 thousand people was carved in a mountain slope in the 1st century A. D. It is likely that originally, that is, for the Nabataeans, the theater arena served as a place for funeral ceremonies, and only later the Romans used it for entertainment.

Behind the theater there is a wide valley surrounded by mountains. This is the center of the dead city. In the rock walls surrounding the valley there are many caves and carved facades. The variety of stone colors is amazing: all colors are there, except green, which is seen only where scarce bushes managed to root. 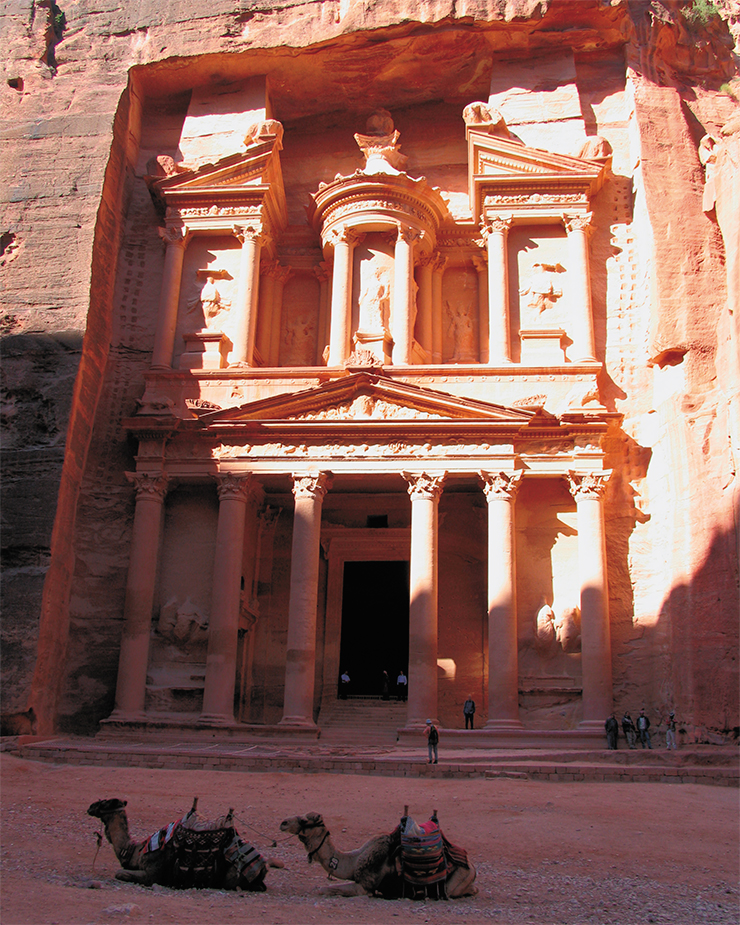 On the steep slopes opposite the spot where Siq comes out in the valley, there are several well-preserved temples, including the Byzantine Church, which has beautiful mosaic floors. The Nabataean temple Al-Uzza Atargatis, also known as the Temple of Winged Lions, was for a long time one of the main sanctuaries of Petra.

The mountain Jabal Haroun, the highest one (1300 m) in Petra, is identified with the biblical Mount Hor, where “on the first day of the fifth month of the fortieth year” Moses’s brother, high priest Aaron, died. The Arabs, who use the name Haroun instead of Aaron, have always considered the mountain to be holy and made their sacrifices there. On the top there is a mausoleum with a white dome, a sanctuary built by the Byzantines.

To the left from where the Siq turns into the valley, there towers the High Place of Sacrifice, the holy place of the ancient Nabataeans. Just as many other nations they believed that deities lived in heaven, and tried to hold their holy ceremonies on elevated points, closer to gods. On top of the mountain one can still see benches for the religious ceremonies and two altars.

A considerable part of the valley near the Roman part of the city, where the ruins of houses and an enormous monastery found in 1993 are situated, is still under the sand. The soil simply abounds in a great number of ancient dish shards, lying right under your feet. Archeologists say that you can begin digging anywhere, and it is a sure bet that in an hour you will find something interesting. There is no doubt that archeologists are in for more unexpected discoveries in Petra: by now, no more than ten percent of its territory has been investigated. The romantic story of the city that for centuries has been hiding from the world behind high rocks and hot sands will go on in the 21st century.