In Russia, bacteriophages have been produced and used for medical purposes for almost 80 years: during World War II, phages saved lives of thousands of wounded soldiers and prevented a cholera epidemic in the besieged Stalingrad before the famous Battle of Stalingrad. The development and widespread use of antibiotics virtually wiped out the production of bacteriophages worldwide; for decades, the Soviet Union had been the only country where bacteriophage technology not only continued to evolve, but a whole industry was built around it. Today, Russia remains the world leader in the production and therapeutic use of these effective and safe antibacterial agents

The cooperation between two outstanding scientists—Félix d’Hérelle from France and George Eliava from Georgia—fruited into the world’s first and only research center of bacteriophagology, which was set up in the Soviet Union in the 1920s. Despite political repressions, as a result of which its first director, Eliava, was shot and some of its staff were sent into exile, the Institute of Bacteriophages (Tbilisi, Georgia) survived and persisted to become the world’s leading center of therapeutic research and production of these bacterial killers.

Soviet bacteriophages were first used on a mass scale in emergency situations caused by the outbreaks of bacterial infections in the late 1930s. Thus, in 1938 there was a cholera epidemic in several areas of Afghanistan near the Soviet border. To prevent the spread of this serious bacterial disease, it was decided to use the cholera bacteriophage. The phage drug was given to the local population and put into wells and ponds. As a result, not a single case of cholera was recorded on the Soviet territory. 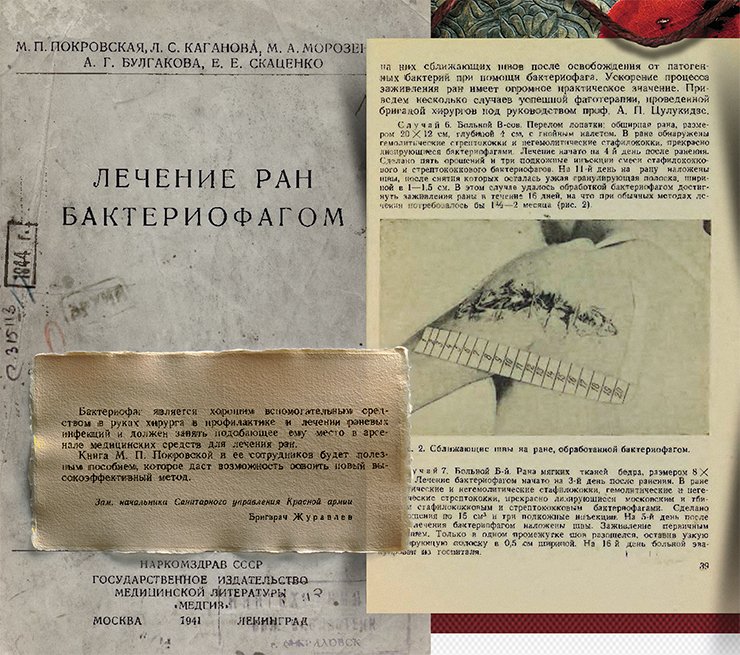 
However, a truly serious test for bacteriophages was still ahead, when the Soviet Union was at war with Finland in 1939–1940. Before the discovery of antibiotics, the fate of a wounded soldier during a military campaign often depended on whether the wound was infected. An integrated team of 11 people, including surgeons, bacteriologists and laboratory assistants, began to use bacteriophage drugs developed and produced at the Tbilisi Institute to save the soldiers wounded in the war with the White Finns.

They found that a relatively small amount of bacteria get into the tissue at the time of wounding, and those bacteria could be easily destroyed by bacteriophages during the first hours, when the bacteria were still on the wound surface. In most cases, an early treatment of wounds with bacteriophages prevented suppurative processes in tissues and led to faster healing.

As a result, the use of staphylococcal and streptococcal bacteriophages helped clean wounds from bacteria in more than half of the cases and achieve a complete sterilization of the wound in 30–40 % of the patients. The elimination of infection through the use of bacteriophages allowed surgeons to suture the wound a week earlier, thus accelerating the healing process. Bacteriophages also proved effective in treating acute inflammatory processes (phlegmons, tendovaginitis, abscesses, etc.); in most cases, the treatment was conservative, without large incisions.

All these results showed the great importance of the prevention of purulent complications in wounds through the use of bacteriophages, which were not only completely harmless but also widely available, inexpensive and easy-to-manufacture therapeutic agents.

Bacteriophages in the Battle of Stalingrad 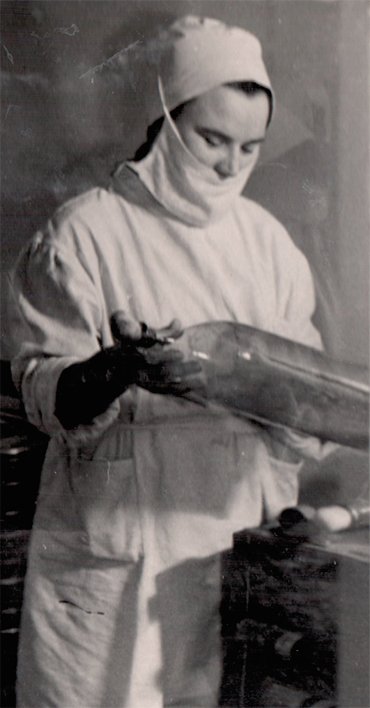 The further history of phage therapy is associated with the tragic events of World War II in 1941–1945. In those years, with a total lack of antibacterial drugs (at the beginning of the war, the Soviet Union did not have a technology to produce penicillin), it was decided to organize mass production of bacteriophages to treat infections in the soldiers of the Red Army.

Particular attention was given to phages that destroy bacteria causing intestinal infections such as cholera, typhoid, dysentery, salmonellosis, etc. The reason was the inevitable lack of hygiene in the field conditions. Later, hospitals began to use the wound infection bacteriophages that proved effective during the Russian–Finnish war. These drugs helped reduce the stay of a wounded soldier in a field hospital to a week. In total, during the war years, the production units established by Soviet bacteriological institutions manufactured more than 200,000 liters of wound bacteriophages for the Soviet army!

These organizations not only produced tons of phage drugs; they did a huge amount of research. The reason was that nutritional microbiological media were made from meat, which was in deficit during the war. Therefore, concurrent with the production, researchers had to find, as quickly as possible, new ways to prepare nutritional media, and they learned how to make them from placenta, casein and even blood clots.

It was bacteriophages (namely, the cholera bacteriophage) that became a key to success in the famous Battle of Stalingrad, the decisive battle of World War II. Cholera had always been an inevitable companion of armies at war. For instance, during the Sevastopol campaign of 1854–1855, the Anglo–French troops lost 73,000 men in military operations and 18,000 due to cholera! At Stalingrad in the summer of 1942, there was an outbreak of cholera on the territory occupied by German troops. On the one hand, it was an unexpected ally; on the other hand, it was a direct threat because the epidemic would not stop at the front line.

Soviet microbiologists implemented an inventive idea to produce an integrated phage drug, which was called by its author—Félix d’Hérelle himself—pyophage (from pyo meaning ‘purulent’). The goal of combining several bacteriophage species targeting different bacteria was to expand the combat spectrum of the drug. This was particularly important for wounds: the injured area is infected by a variety of bacteria, and emergency prevention and treatment of already festering wounds is best done by different bacteriophages. The same principle was later used in the creation of intesti-bacteriophages, i. e., combined Russian drugs based on intestinal phages, which are still widely used for mass prevention and treatment of intestinal infections

It was important to assess the risks on site, and this task was assigned to Prof. Zinaida Ermolieva from the Institute of Experimental Medicine (Moscow), who had already had an experience of working with bacteriophages under battlefield conditions. (By the way, it was Ermolieva who obtained in the same year 1942 the first Soviet penicillin (krustozin VIEM), which began to be used extensively in military hospitals by the end of World War II.)

To obtain Vibrios cholerae, one needed “material,” i. e., corpses of those who died from cholera. Berlin began to receive bizarre messages: dead bodies were disappearing from German field hospitals. The corpses were stolen and carried over the front line by Soviet scouts. However, the Vibrios cholerae that were sent to a factory in the city of Gorky (Nizhny Novgorod) were too weak to be used for the industrial cultivation of bacteriophages. The factory did a great deal of work to infect rabbits and cultivate the necessary pathogenic bacteria and their bacteriophages. Unfortunately, the train with the phage drugs, which had been so difficult to obtain, was bombed out by German aircraft. Therefore, Ermolieva organized in besieged Stalingrad an underground secret laboratory for the production of the cholera bacteriophage directly. The drug was given to nearly 50,000 people every day. 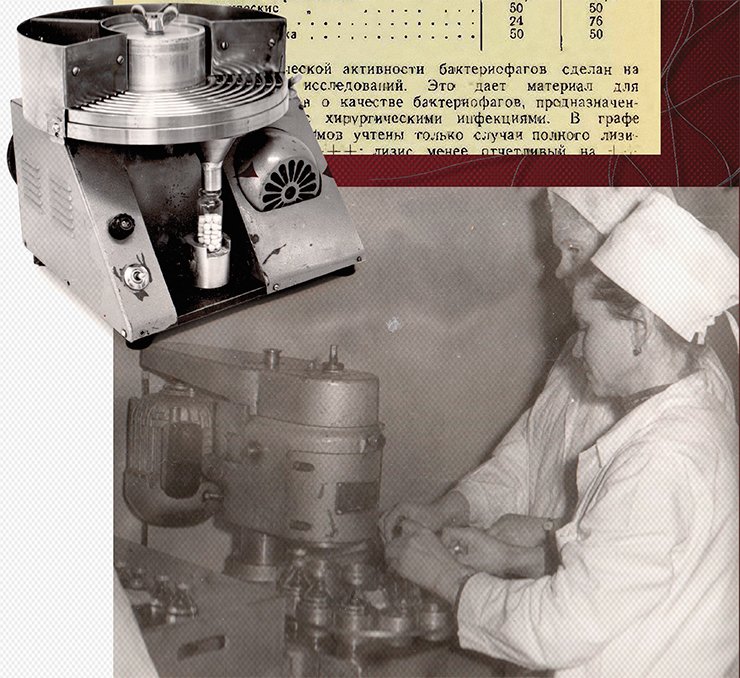 At the end of 1942, Zinaida Ermolieva received a direct call from the Commander-in-Chief Iosif Stalin, who asked her: “Is it safe to keep more than a million people at Stalingrad? Can the cholera epidemic interfere with the military plans?” The bacteriologist said that she had already won a victory at her front, now it was the time for the Red Army.

These events marked the beginning of the mass use of bacteriophages in the Soviet Union. Notably, this happened at the time when the world switched to antibiotics, which were discovered by a British scientist Alexander Fleming in 1928.

The history of bacteriophages on the Soviet territory continued after World War II. Up to now, bacteriophage drugs have been successfully produced by Russian companies that make immunobiological products. 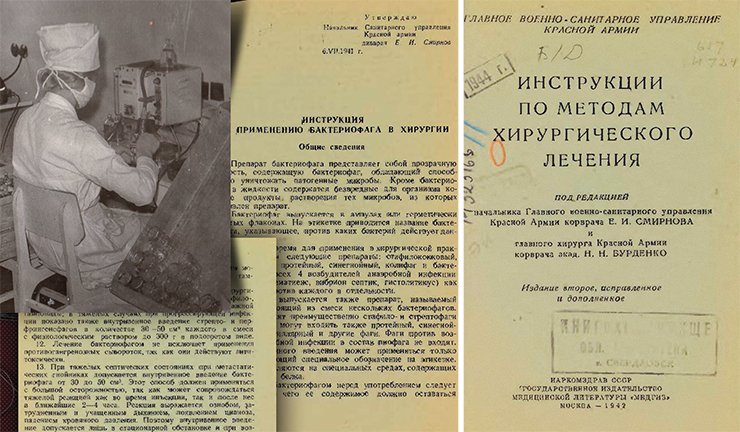 Currently, NPO Microgen, Russia’s largest producer of such products, a state company under the Russian Ministry of Health, produces 14 drugs containing bacteriophages targeted at the most common pathogens of bacterial infections. They are used for the prevention and treatment of acute intestinal infections (dysentery, typhoid, salmonella, etc.) and for the treatment of purulent-septic and other diseases of various localization: surgical infections, diseases of the ear, nose, throat, lungs and pleura, urogenital pathologies, gastroenterocolitis, intestinal dysbacteriosis, and infectious diseases in newborns and infants. The drugs have been produced at three plants associated with microbiological institutions: in Ufa since 1939; in Gorky since 1941; and in Perm since 1995.

Bacteriophages are currently produced in Russia on an unprecedented scale, like nowhere else in the world. Bacteriophages are manufactured as high-grade drugs, and the consumption of these antibacterial agents in Russia is more than 1 billion packs per year. However, it was only in 2016—one century after the discovery of bacteriophages!—that these drugs were included into the official Russian pharmacopoeia. 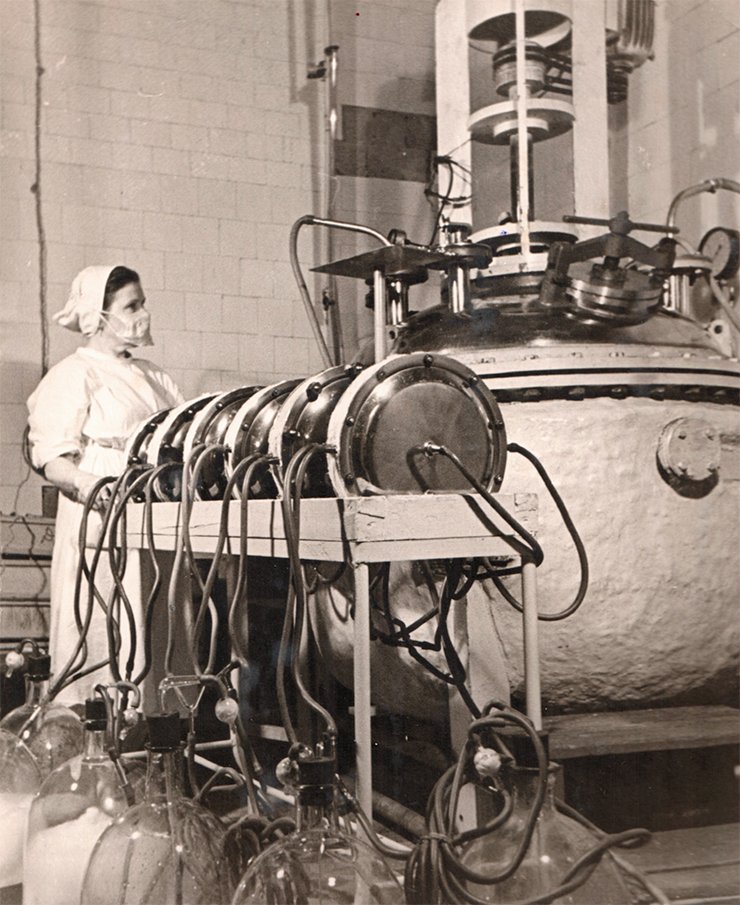 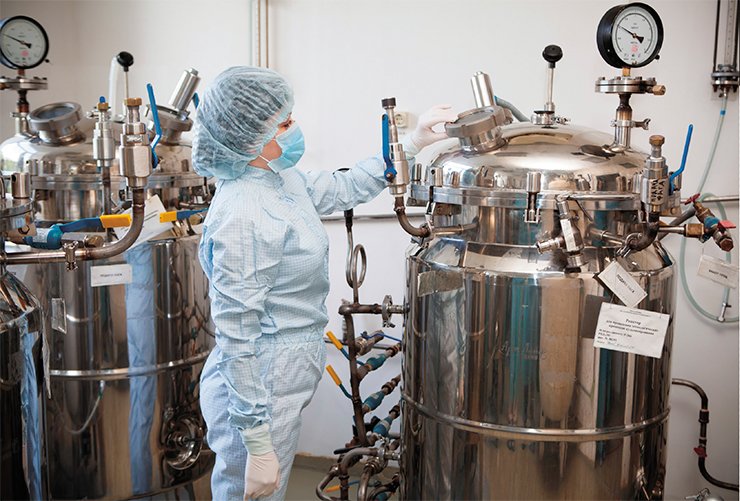 One of the latest examples of the preventive use of Russian bacteriophages on a mass scale flood relief programs.

For instance, in 2013, about 70,000 doses of intesti-bacteriophage, which targets a broad spectrum of bacteria causing gastrointestinal disease, were delivered to the regions of the Russian Far East. In 2014, more than 8,000 packages of this drug were sent, together with dysentery and salmonella bacteriophages, to the Altai Krai and the Republic of Khakassia, which had also suffered from floods.

Thus, phage drugs have been and still are a means of rapid response to bacterial threat at the gravest moments in the Russian history. The culture of producing and using these antimicrobial agents, which has been preserved through the creative and selfless work of Russian scientists, is particularly valuable now, in the light of the rapidly growing bacterial resistance to antibiotics.

The editors thank B.A. Ryzhikov (NPO Microgen) for his help in preparing this article