The top ten breakthroughs listed by Science magazine include the results of the direct dating of rock paintings found in the karst caves on Sulawesi and the neighboring Indonesian islands. The discovery of such a great number of colorful rock paintings in this part of Southeast Asia became a sensation for public as well as experts. Thousands of images, including the so-called "stencils", which were created by spreading fingers apart and blowing paint over the hands and fingers and onto the rock surface, caused a direct association with the Paleolithic cave paintings of Western Europe. Analysis of calcite layers covering the rock paintings revealed their “advanced” age of 17,000 to 40,000 years, and thus confirmed that the cave paintings on Sulawesi are indeed the oldest of all the known ones along with the images on the walls of the Spanish cave El Castillo

According to Science magazine, the greatest scientific breakthroughs of 2014 include research results on the dating of cave paintings discovered in karst caves on  Sulawesi (Indonesia), the 11th largest island in the world. Their age of 40,000 years stunned not only common readers but also experts in the field

In 2005 Jean-Michel Chazine, a French archaeologist, made a presentation at the international conference “World Rock Art” in Moscow. He told his colleagues about his research on cave paintings discovered on the islands of Indonesia. His results made an indelible impression. It was a great scientific discovery.

The multicolored paintings evoked direct associations with the Palaeolithic cave art of Western Europe. In Tevet alone (a small cave on Borneo), researchers found 145 hand markings—the so-called negative hand prints. According to experimental studies in Europe, these handprints were created by spreading fingers apart and blowing paint from the mouth through a tube over the hands and fingers and onto the rock surface.

During archaeological works on Sulawesi, researchers collected and dated 19 samples taken from 12 handprints and 2 animal images from 7 caves near the town of Maros (South Sulawesi). The earliest images include a handprint dated at 39,900 years ago, which was found at a height of four meters, an image of babirusa (35,400 years), and an image of another unknown animal, presumably, a pig (35,700 years)

The well-preserved paintings of Sulawesi and Borneo differ from the classical Franco-Cantabrian examples in the various additional images painted over the handprints. These images are associated either with tattoo or coloring or, perhaps, with the veins pattern. This “transparency” and the manner to depict internal organs of animals, such as heart and gullet, are well known to archaeologists specializing in the prehistoric art, but the diversity of additional details on the handprints was truly amazing.

The great number of the discovered petroglyphs is breath-taking. In addition to thousands of handprints, there are images of animals representing the fauna of Southeast Asia. In particular, researchers discovered an image of a babirusa, or deer-pig, drawn in profile (this animal lives only on Sulawesi and the neighboring islands). In his presentation, Chazine also suggested that the paintings were created during the Upper Palaeolithic period and discussed the thematic unity and similarity of the aesthetic preferences of cave painters in Europe and Asia.

In October 2014, ten years after the conference, Nature published the results on the dating of the Sulawesi cave paintings. The dating of the paintings was obtained by analyzing the calcium carbonate deposits that formed over the multicolored images. Known as “cave popcorn,” these deposits are globular coralloid speleothems, or mini stalactites. The study dated the paintings at 17,400 to 39,900 years ago. Thus, if direct dating methods (analytical methods used in natural science) are free from errors or large inaccuracies, the cave paintings of Sulawesi are indeed among the oldest artwork ever found, along with the images from the Spanish cave El Castillo. 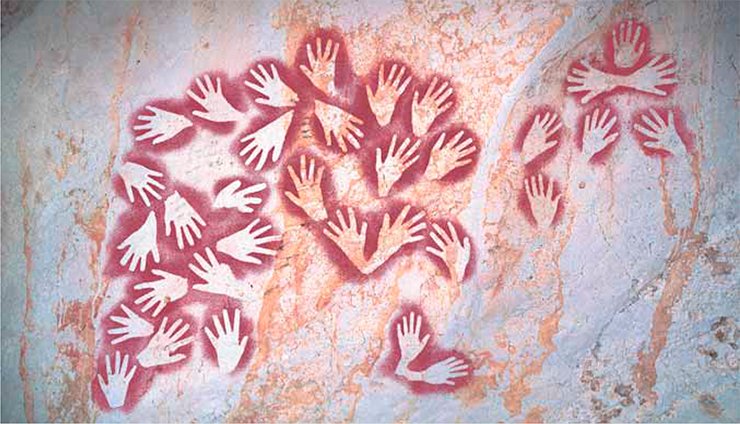 It should be noted that there is an ongoing improvement in the dating methods used for ancient dyes and relief images. Moreover, already at the end of the 20th century, archaeologists declared the beginning of a “post-style” era in the dating of Stone Age artworks and suggested that age estimations should be based on natural science dating techniques rather than on the features of artistic style.

MOST ANCIENT IN ASIA Why was the discovery of ancient rock paintings on Sulawesi so sensational? The reason is that no one had ever found any traces of human presence in this island region of Southeast Asia, which could be comparable in age with the human skull from the Niah caves on Borneo, which is dated at 43,000 BC. Nevertheless, the dating conducted by Maxime Aubert (2014) for the rock paintings found on Timor and Sulawesi does not contradict the chronological logic. Today, there is compelling evidence that man began to inhabit this part of the world—from the northern part of the Philippines to the southeastern tip of the island of Papua New Guinea—already since the Upper Paleolithic. Further to the east, there was the last region of presence of ancient man in Austronesia, who scattered across the Pacific region over the next 5,000 years.
Until recently, it was believed that the samples of rock art from Southeast Asia are “modern,” i.e., refer to the period of the Austronesian influence. It was suggested that Australian aborigines were the only real masters of rock art in this region and the authors of the paintings. This hypothesis was supported by the images of quite modern boats and weapons in some of the paintings.
Moreover, analysis of the territorial distribution of the cave art findings up to 90° east longitude revealed a very irregular pattern, e.g., such islands as Java, Sumatra, Borneo, and Philippines were found to be surprisingly “poor” in terms of rock art. To explain of this fact, researchers used the so-called Wallace line, which indicates the western border of the transition zone between the Asian and Australian fauna. Today this line runs between Borneo and Sulawesi, but once it was a real sea strait separating two continents. In this sense, Sulawesi could be regarded as the western outpost before the vast space “free” from rock art.
The situation changed dramatically after the discovery of rich rock art on Borneo in 1994. The findings include mainly the images of human hands, i.e., the so-called negative handprints, which were presumably created at the end of the Palaeolithic (Chazine, 2009). However, it was only in 2003 that researchers could conduct the exact dating of the images using the data on the uranium and thorium isotope content and the radiocarbon analysis of the thin calcite layers covering the paintings. The thus estimated minimum age was about 10,000 years.
According to the archaeological excavations carried out in this area in cooperation with the Indonesian authorities, the discovered images are dated at 12,000 years ago or older (recently discovered images are dated at even 24,000 years). Thus, the timeframes of human occupation on East Borneo were shifted greatly into the past. The study of cave paintings from Sulawesi, Borneo’s neighbor island, dated them at 40,000 years old, suggesting that the use of such an effective method as U/Th dating allows researchers to “jump” into the past much faster and farther than before.

Here, it makes sense to also recall the no less sensational discovery of the remains of “hobbits”—undersized people—on the island of Flores, 400 km to the south of Sulawesi. Both the anthropological materials from Flores and the cave paintings from Sulawesi are evidence of early migrations of ancient humans, with the paintings also being imperishable monuments of the spiritual culture of early humans.