Elixir of Youth from Blood?

Mankind has been dreaming of eternal youth and immortality throughout its entire history; this dream translated into hypotheses about possible overcoming the species’ limit of life and even abolition of aging. Not coincidentally, Science magazine included a series of ageing related works published in 2014 into the top ten breakthroughs of the year. However, the objects of these studies were pairs of laboratory mice of different age with surgically spliced circulatory systems. The blood of the young animals was found to contain a special protein that leads to expressed rejuvenation of the nervous and muscular tissue in the aged mice. Incidentally, the very idea of rejuvenation by transplanting an organ or tissue taken from a young organism has a long and rather dramatic history. At the beginning of the last century, this approach was developed by Serge Voronoff, who served as a prototype for the well-known professor Preobrazhensky in the novel Heart of a Dog by Mikhail Bulgakov. Although over the last hundred years, scientists have collected a lot of interesting, albeit controversial data on biochemical factors affecting the ageing and rejuvenating processes, pharmacies still do not offer an "elixir of youth."

In recent years, the problem of intervention in the natural process of ageing has been the focus of growing attention from both scientists and nonscientists. Serious scholars as well as common people, from Christians and Muslims to atheists, continue to cherish dreams about eternal youth and individual immortality. The dreams evolve into hypotheses claiming that we may be able to overcome the limit of life for humans as a species and even defeat the ageing process altogether. Not coincidentally, Science included a series of ageing related studies published in 2014 into the top ten most impactful works of the year

The question of blood is the most complicated problem in the world!
M. A. Bulgakov The Master and Margarita

The humankind is ageing rapidly: according to the United Nations, the proportion of elderly people (above 60 years of age) is growing at several times the rate of population growth and will likely be the same as that of children and adolescents by the middle of the 21st century. The global ageing of the population is a great challenge to the humankind, whose future depends, in large part, on how the scientific community will respond to this challenge. The search for tools and methods to prevent premature ageing and age-related diseases is among the priorities of modern gerontology.

In 2014 a group of biologists led by Dr. Amy Wagers (Harvard University, United States) published their studies on the rejuvenation of an ageing organism by means of “young” blood. The authors used, as an experimental model, the method of parabiosis, i.e., surgical joining of two or three animals by means of a common circulatory system or spliced tissue. They spliced together pairs of laboratory mice of the same genotype but different ages by creating a common circulatory system. This intervention resulted in a pronounced rejuvenation of the muscle and nervous tissue of the aged mice. The researchers identified the cause of these effects—it was a protein isolated from the blood of young mice and called GDF11 (growth differentiation factor 11) (Mayak et al., 2010; Katsimpardi et al., 2014; Sinha et al., 2014; Hall, 2014; Kaiser, 2014). 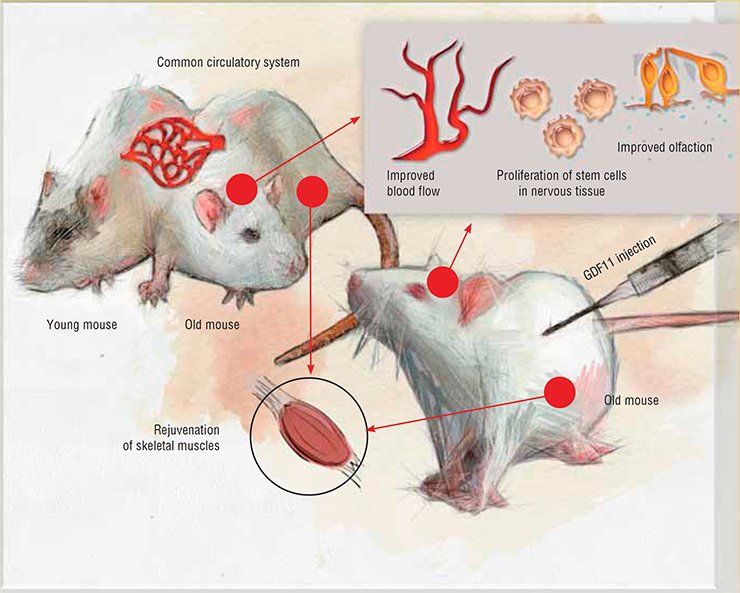 By the way, the researchers also found that the joining of circulatory systems affects the behavior of stem cells, i.e., progenitors of blood cell elements, in aged mice. Their stem cells began to behave themselves as if they were young, i.e., dropped in number and began to differentiate more proportionally into various specialized cell types. These changes might have been induced by another insulin-like growth factor (IGF-1) from the young blood, the key role of which is currently not disputed (Anisimov and Bartke, 2013).

In discussing the importance of the results, it should be noted that the very idea of rejuvenation by means of transplanting an organ or tissue from a young organism has a long and dramatic history. As early as in 1912, the Austrian surgeon E. Steinach transplanted the sex glands of young rats into old ones, as a result of which the recipients regained their reproductive ability as well as outward signs of rejuvenation. The sensational results obtained by Steinach led to numerous attempts at using this method to rejuvenate aged people; however, the effect was either dubious or led to accelerated enfeeblement.

Independently of Steinach, the idea of rejuvenation by transplanting sex glands was developed by a French physician of Russian descent Serge Voronoff, who served as a prototype for the well-known professor Preobrazhensky in the novel Heart of a Dog by M. A. Bulgakov. In 1920 he published the results of 120 experiments on sex gland transplantation, which were conducted on castrated and aged goats and rams. He translated the testicles of young animals to the aged ones in order to restore their male power or rejuvenate the animals. Extrapolating the experimental results to humans, Voronoff painted alluring pictures of human rejuvenation and heavily criticized the laws that did not let him use organs of people who died from accidents. He believed that, in the near future, physicians would have the right to transplant organs and suggested that, for the time being, they transplant glands from anthropoid apes. And this he did in the same year of 1920.

The next researcher to grab the baton in creating the “elixir of youth” was a Russian physician, philosopher, and revolutionary A. A. Bogdanov. In 1926 he organized in the Soviet Union the world’s first Research Institute of Blood Transfusion. Bogdanov believed that ageing is a product of random disorders in the functioning of individual organs. In this process, he thought, the circulatory system, which ties together all the bodily systems, was the weak link. At the beginning of the 20th century, there was a popular theory that the immortality of unicellular organisms was due to their conjugation, i.e., direct contact (interaction) of two cells (now we call this process an exchange of genes). At that time researchers believed that mobile blood elements can also conjugate between themselves; therefore, the conjugation of blood cells of different people could theoretically increase their life span. To this end, Bogdanov proposed to exchange blood between people; however, he died while conducting the said experiment on himself.

His pupil, the well-known Soviet gerontologist A. A. Bogomolets, believed that not only blood but also all connective tissue of the body play a key role in the ageing process. He proposed to administer antibodies to connective tissue to induce an immune response. Although a part of connective tissue cells dies, their death was thought to activate other cells in this tissue. In essence, this scheme is generally similar to cell therapy, a more recent method whereby the action of transplanted cells is mediated by the biologically active molecules (growth factors, cytokines, etc.) released by the cells. However, the effectiveness of Bogomolets’s method (as well as cell therapy itself) in prolonging life is far from being obvious. 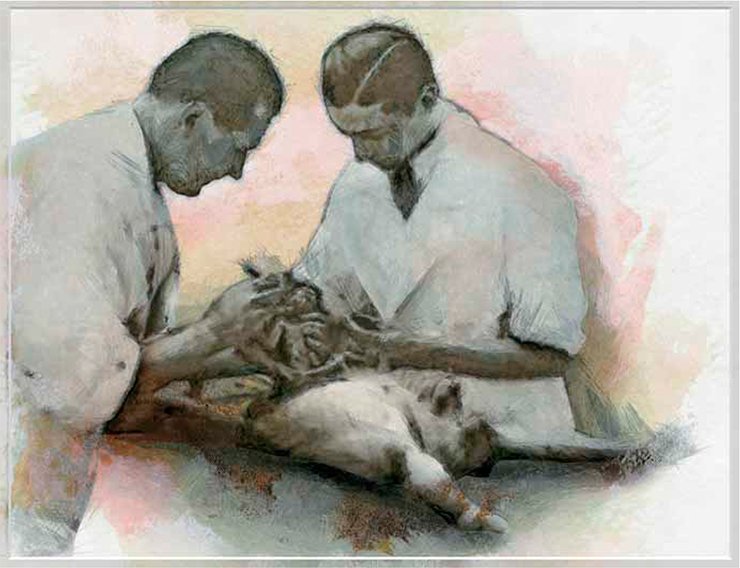 A sudden reminder of Steinach’s old experiments was a study carried out by a team of US scientists led by J. Carey, who transplanted ovaries from sexually mature 2-month-old laboratory mice into ovariectomized control females of various ages (Cargill et al., 2003). The study found that ovary transplantation into 11-month-old “grannies” not only increased their life expectancy by a factor of 1.5 compared with the ovariectomized control mice but also restored their reproductive ability. Although mice are generally incapable of reproduction at this age, the transplanted ovary preserved their cyclic estrous activity (although not to a full extent) for almost half a year.

In following experiments researchers showed that ovary transplantation to nonovariectomized old females also increased their average life expectancy (Mason et al., 2009). The authors suggested that a young ovary has a protective effect on the organism, especially when transplanted into old females. However, if the recipients’ own ovaries already stopped to ovulate by the time of the transplantation, the transplanted ovaries also lost the ovulation ability. On the other hand, it has long been known from experiments on laboratory rats that the ovaries of old rats transplanted into young nonovariectomized females retain a normal estrous cycle (Aschheim, 1976).

As concerns the rejuvenating effect of young blood, the results are far from being clear. Thus, as early as in the 1980s, researchers at the Institute of Gerontology and Experimental Pathology (Kiev, Soviet Union) used the aforementioned parabiosis method to discover that the immune system of a young individual was ageing faster under the influence of an older partner. However, the immune system of the old individuals did not rejuvenate (Sidorenko et al., 1986).

Two decades later, researchers at Stanford University (United States) used the parabiosis model to find that the blood of old animals contains substances causing senile changes in the brain of young animals. They suggested that these substances, the level of which increases with age, can suppress the formation of special neurons playing a key role in memory development and the maintaining of learning abilities (Villeda et al., 2011).

In another study, scientists analyzed several dozens of immune system proteins circulating in mouse blood to find an increased level of six of these proteins both in old mice and in young ones “coupled” with old mice. The most significant increase was reported for chemokine CCL11 (eotaxin), a small protein that attracts at its secretion site the eosinophils related to immune blood cells. The content of this protein in the blood and cerebrospinal fluid of humans was found to increase with age. This study of US scientists fully confirmed the earlier observations made by their Russian colleagues at the Gamalei Institute of Epidemiology and Microbiology (Moscow), who were the first to show the accumulation in blood serum and in the brain of mice and humans of a factor that accelerates the ageing of the nervous system and body as a whole (Zuev et al., 2005).

To conclude this article, I would like to mention another study conducted by researchers from Stanford University. In 2005, they transplanted bone marrow stem cells of young and old mice into young mice (Rossi et al., 2005). It was found that the survival of myeloid progenitor cells, which give rise to erythrocytes, platelets, and various types of white blood cells (other than lymphocytes) did not depend on the donor’s age; however, lymphoid cells, i.e., progenitor lymphocytes, showed worse survival when taken from old donors. Further studies showed that some of the genes are expressed (activated) differently in stem cells of young and old animals, with the largest differences being reported for genes that regulate the cell cycle, signal transduction, and the specialization of cell subtypes of the lymphoid series.

Particularly noteworthy is the fact that stem cells of old mice showed a higher level of expression of genes responsible for the development of leucosis than those of young animals. These data are fully consistent with the earlier observations that showed a greater occurrence of leucosis in mice that received, at young age, the thymus, bone marrow, and spleen cells from old mice while the transplantation of the same cells from young donors did not lead to these effects (Ebbesen, 1971). It might be recommended that these results should be taken into account when transferring donor blood between people of different ages.

Thus, what actually happens—whether young blood rejuvenates an old organism, or old blood accelerates ageing in young individuals—is still an open question. What tilts the scales? Let us not rush to conclusions. As Woland, another well-known character of Bulgakov’s novel, put it, “your theory is intelligent and sound. Now—one theory deserves another.”