In June 2017, a Russian-Indian archaeological team worked in the Pir Panjal Range, western part of the Inner Himalayan region. Its mission was to seek and record stone horses, enigmatic sculptures lost in the remote mountains of the Jammu region, the State of Jammu and Kashmir, India. The expedition was organized thanks to the support of the Gerda Henkel Foundation. The discovery of these monuments may open a new page in the history of north-western India

Residents of the Ramban district have known all along that the Pir Panjal Range holds innumerable sculptures of horses and riders in most unlikely places but nobody has an idea when they were made. One such place, located in the vicinity of the village of Gool, was turned into a kind of an open-air museum; some sculptures and flag-stones were brought from the adjacent fields. A lot of statues are broken; their fragments make part of alleys and walling around houses and fields. You can also find them in streams, where they are used for washing. The local population, whose religion is Islam, does not know anything about their origin; for most of the locals, the statues are alien and obscure. Those who have shown some interest in them, consider them to be traffic signs for the caravans that used to cross this area in the time of the Mahabharata. This, however, is way off the mark. 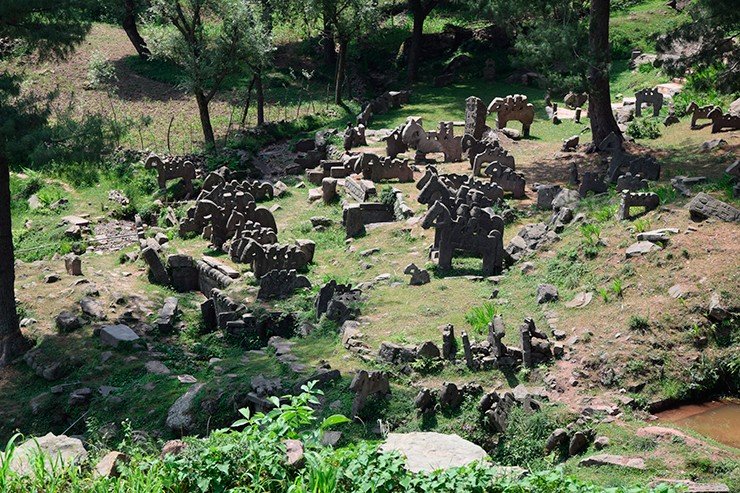 The primary and absolutely indispensable task in the study of these exceptional monuments was their accurate record and description. This part of the investigation was assigned to a Trimetary Consulting team led by Mikhail Anikushkin, who performed the surface laser scanning of these objects. As of today, this is the most precise technology for recording numerous objects. The work was done in two clusters, where the numerous stone sculptures are concentrated. The first cluster is at the height of 1890 meters above the seal level, and the second, at 2030 meters above the sea level. The area of each cluster is about a hectare. 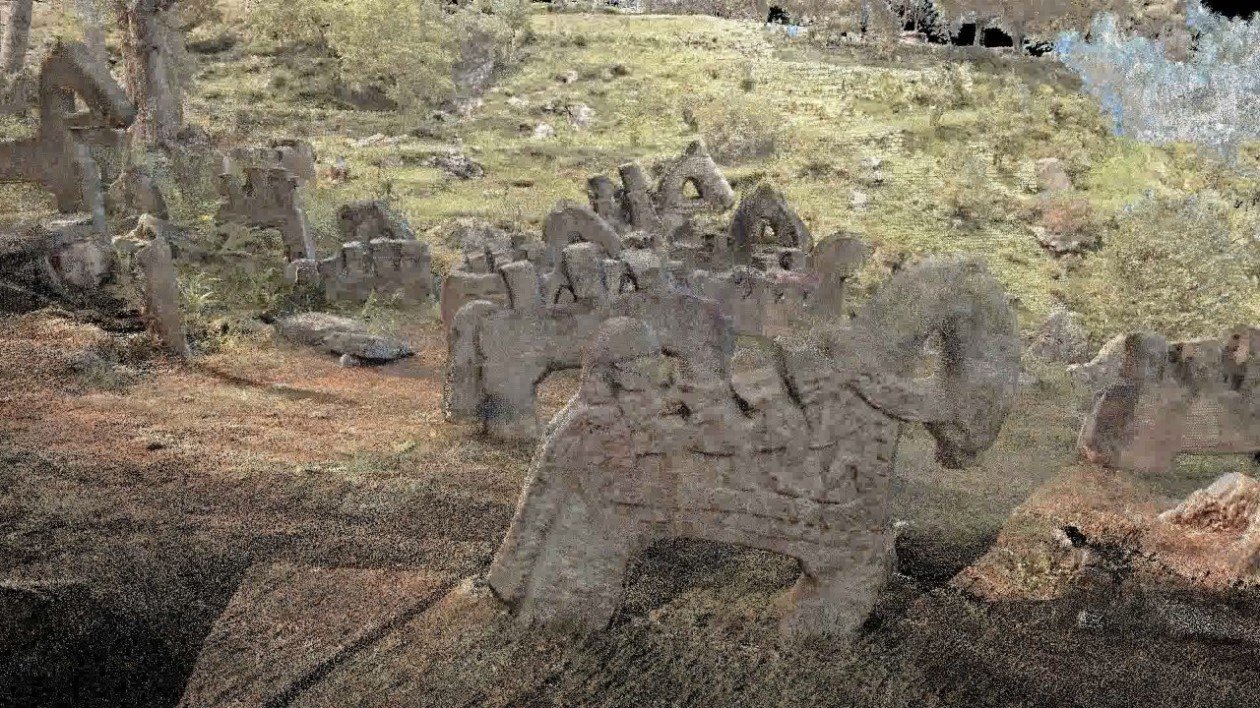 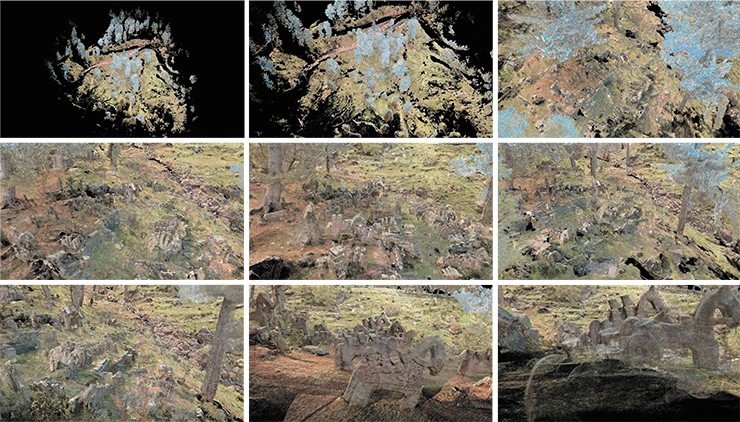 As a result of laser scanning, a colored point cloud has been obtained containing exhaustive information about the geometry of the objects, their spacing, orientation and micro-relief of the locality. The point cloud can be used for scientific analysis, excavation planning and visualization of the survey objects. On top of that, it contributes to the conservation of an endangered cultural heritage site. In the future, we are planning to create a real-world 3D model of the objects and an interactive 3D application on the basis the point cloud. The application can be developed into a virtual reconstruction in several versions, that is, actually, into a virtual museum accessible to the scientific community and broad public. 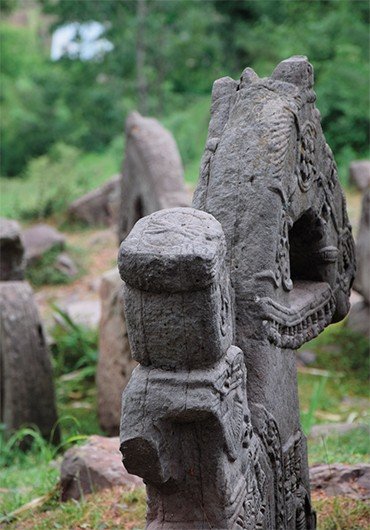 The most original part of these monuments ruined by time and people are rock hewn depictions of horses bearing two, three or even four riders. This extraordinary and unrealistic way of collective travel suggests that these are mythological characters: heroes, ancestors heading for the faraway land that each ethnicity fancies in its own way and where everyone complete their earthly existence. These are monuments to perished warriors. Both the horses and equestrians are depicted in much detail, with carefully sculpted fittings of harness, clothes, ornaments and arms. At the same time, we are looking at a stylized or primitive type of art: all the proportions of the human body are distorted, as well as the proportions of the arms and harness. The horses’ backs are covered with tasseled carpets, similarly to oriental sofas. The lookalike horsemen sitting astride strong horses seem to be mythical, fictitious beings that have arrived from an unknown world. The details are redundant, which, for all one knows, may reflect the reality. Every horse deserves a separate description because though all the figurines we have seen and recorded (there are over 200 on just these two sites) look similar and indicate to a certain canon, each stone sculpture has its special features. Amazingly, all the riders have the same face. To convey the image of a warrior, a character that embodies the warrior-host was created. All the horsemen have tabular napes, which, in our opinion, reflects is the anthropological feature of the population – ring, or occipital-frontal deformation. This kind of deformation was typical of Central Asian peoples in the 1st c. CE. In this region, the tradition was adopted by the nomads known under the umbrella term “Huns,” who spread it to Europe and India. The Hephthalite rulers’ coins show the same tabular napes and special shape of the skulls, which anthropologists attribute to an artificial deformity (Trofimova T.A. Coin depictions of Hephthalite rulers and the custom of artificial cranial deformity in ancient Central Asia (In Russian) \\ Istoriya, arheologiya i etnografiya Sredney Azii. Moscow. 1968, p.189). The Himalayan riders share the same type of deformity. Their most typical facial features, which make them look similar to the people depicted on the coins, are big straight noses of triangular shape and handlebar moustache shown in thin parallel lines. The good-sized round earrings worn by each horseman are similar to the ones we see on the Hephthalite coins.

Before us is a totally original cultural layer, which, as we see it, dates back to an obscure period of Indian history connected with the invasion and rule of the Hephthalites (5th – 7th cc. CE), an ethnicity that was as enigmatic as powerful. We know of the three Hephthalite tribes that managed to fit in with the ecological and social environment of Northern India, which ensured their prosperity. They are Rajputs, Gurjars and Jats (Uspenskaya Ye.N. Rajputs. The Knights of Medieval India. 2000). The belligerent Rajputs gave rise to the just as warlike Dogra, an ethnicity still populating Jammu and the adjacent regions of Punjab, Himachal Pradesh and northeastern Pakistan. In all likelihood, it was in these mountainous quarters that ancient burial and cult monuments were “hidden” and forgotten, and the silent stone warrior-host discovered in the Pir Panjal Range must be some of them. 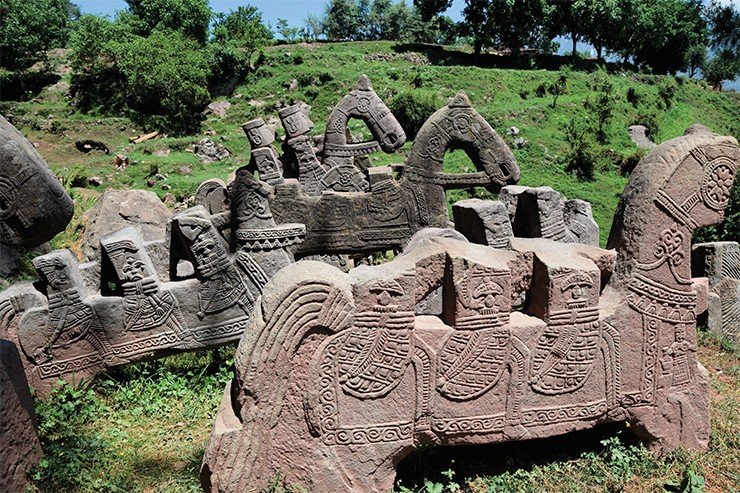 Surprisingly, modern people populating Jammu look a lot like the ancient riders. The appearance of the men, women and children now living in the Ramban district suggests the way the people depicted in the anonymous portraits cast in stone might have looked in real life.

The ethnicity that created these original monuments has not melted into thin air, and the descendants of these tribes continue to live in this area, completely unaware that the sculptures interfering with their working the land are, in fact, remnants of former glory and memory of their ancestors.