The high penetration ability of X-ray radiation gives researchers a unique opportunity to study objects without destroying them; therefore, these studies are often the only means to examine the internal structure of substances in medicine, geology, archaeology, and other fields. X-ray microscopy has made it possible to obtain data on the structure of an object with micron and submicron resolutions in a few fractions of a second. Researchers of the Budker Institute of Nuclear Physics SB RAS (Novosibirsk) began to use synchrotron X-ray microscopy as far back as the 1970s; however, the X-ray phase contrast microscopy and microtomography instrument based on modern digital detectors and X-ray optical elements, which greatly improved spatial resolution, started working only in 2005

Using a set of techniques that included X-ray and scanning electron microscopy along with X-ray crystallography, researchers analyzed some of the most mysterious things found in the Xiongnu mounds—big copper rods rounded at the edges.

Petr Kozlov, the first researcher of the Noin-Ula mounds, did not make any assumptions about these metal objects in his reports and diaries. Subsequently, A. N. Bernshtam and then S. I. Rudenko supposed that they were the bronze chi clubs, a weapon for close-in combat, which was described in Chinese written records (Rudenko, 1962). Based on the recent results of excavating a Xiongnu mound in the Tsaram valley in Transbaikalia, it was supposed that the rods were handles fixed by leather laces to coffin walls, which had iron rings with a pike punched into them (Minyaev, 2010, p. 18). At present, many archaeologists agree with this opinion, although some researchers still consider these artifacts to be Xiongnu weapons: such a club could be used to knock out an enemy (Nikonorov and Khudyakov, 2004, p. 64).

The recent excavations of the Noin-Ula mounds have complicated the situation rather than shed light onto it. Thus, in 2012 a similar copper rod was found on the floor of an inner cist under a layer of silk. Although the coffin in this mound was perfectly preserved, no traces of holes or iron rings were found on its walls (Polosmak et al., 2013). As a matter of fact, no traces of handles fixed to the coffin walls were found on the other coffins from the Xiongnu burial sites, although similar metallic rods were found practically in all tombs of the Xiongnu nobility. 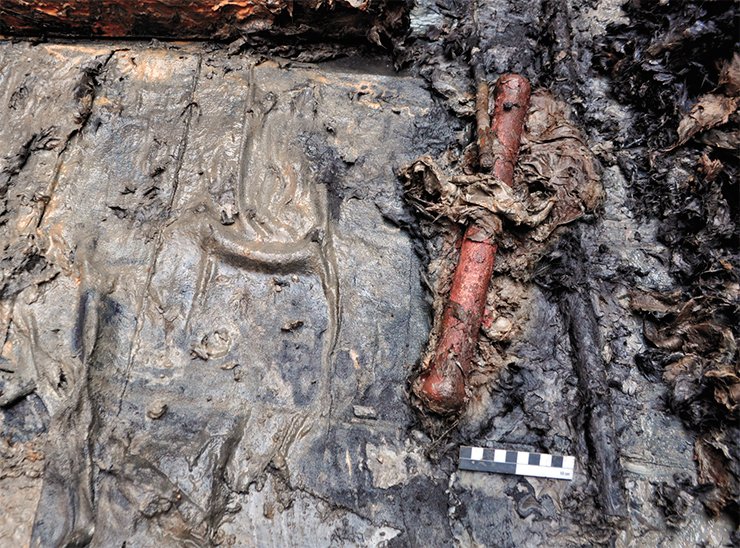 Identifying these objects as coffin handles by no means explains the fact that a very complicated technology was used to produce them: the external bronze shell has an iron core inside, as noted by S.I. Rudenko.  Moreover, there were two graves which contained only thin iron rods without a copper shell (Polosmak and Bogdanov, 2009; Treasures..., 2011). The researchers who made this discovery supposed that these iron rods were related to the bronze covered ones that were found in other Xiongnu tombs although the function of the rods is still under debate (Miller et al., 2009, p. 309).

The synchrotron X-ray radiation analysis of the unique finds showed that the copper coating of the artifact was applied by pouring copper melt into a mold cavity, as evidenced by the bulges on the inner side of the object under study. The porous structure of the shell indicates that copper hardened in the mold cavity almost immediately, with the internal steel rod fixed at the edges between two cast iron plates.

The crystal X-ray diffraction analysis led to determining the ratio of cementite phases (iron carbide Fe3C) and ferrite phases (α-Fe) in the internal steel rod and, correspondingly, the carbon content in it, which varied in the range 0.1—0.4%. The totally different orientation of ferrite and cementite crystallites gave evidence of the absence of mechanical strain in the sample.

The composition of the iron core included small (below 0.1%) impurities of manganese, nickel, and copper, while the shell contained small impurities of silver (0.5%), lead (0.3%), antimony, and tin (below 0.1%). The presence of these impurities is characteristic of iron and copper ores.

The copper shell contained round molten microinclusions of copper sulfide (Cu2S) with typical sizes of 20–30 μm. Copper sulfide is abundant in nature as the mineral chalcocite, which obviously was used as the ore. In order to obtain copper from the ground chalcocite ore, oxygen blowing at temperatures of 1200–1300 °С is required, which implies a well-developed metallurgic industry, including a special furnace equipped with bellows (Hauptmann, 2000). 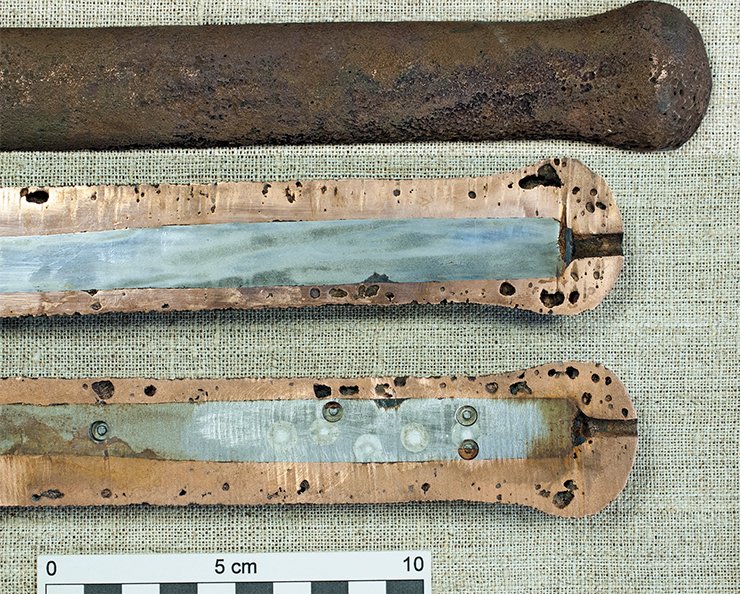 The microinclusions detected in the steel samples (wustite, fayalite, and amorphized quartz) are slag residues and are characteristic of refined iron production (Buchwald et al., 2000). Fayalite is present in all inclusions as a phase recrystallized from the melt with impurities of alkali and alkaline-earth oxides. Since the melting point of fayalite is within 1100–1200 °С, it means that iron was made under the same temperature conditions as copper.

All inclusions have a characteristic orientation along the rod, which seems to be due to the hammering orientation of the iron rod. When forged iron is produced, it is the outer surface that is usually carbonized; therefore, carbon content in steel has a characteristic orientation and decreases in the center of the fabricated object. However, it is not observed in our case; therefore, we can assume that the rod was reforged from another steel item.

Unfortunately, even such detailed information about these mysterious artifacts has not enabled the researchers to determine their function reasonably well. It is interesting that no bimetallic items were found in the Han burial sites in China, and Chinese written records do not mention coffin handles. Therefore, we cannot exclude the possibility that they belonged only to the Xiongnu culture and were made only for the Xiongnu people. On the other hand, these items could have had a practical purpose: the coffins were put down into the deep pits of burial sites by means of a windlass, and the objects under study could have been a part of the rope and belt construction holding the coffin in the desired position. After the coffin was placed in the cist, the rods and belts were left there. In many cultures, all the accessories used in the funeral ritual are left in the grave: it is considered to be dangerous to return them to the living.