50 years in Service, or Programmed Death

“So what?” that’s what Sergey Kuzmin, the brilliant inventor of the famous Milichrom would say, hadn’t he died in 1986, “normal devices, for example, watches, even mechanical ones, say, a cuckoo clock, work for 300 years unless a bomb hits them. Devices are made of iron, nickel, aluminum, tantalum, gold, Teflon. They would work for a hundred years if electronics didn’t develop.”

Dear Seryozha, that’s true—and not very true. When engineers laid their hands on new electronics, they got naughty and decided to make machines smarter than humans. Remember when the old TVs had two switches, one to turn them on, which was also a volume control, and one to switch between the five programs. The rascals forged a monster of a TV, with a huge screen, which is good, but also with a huge remote control, which only a graduate of a music academy could master. Well, yeah, that’s not the point.

Seryozha, all your devices, which escaped the hands of the rascals, still work for the mankind. Your Milichrom is still up and running, and the rascals were kept on a leash. The vacuum and solid-state electronics of today stagger imagination.

We tested it in Irkutsk—not a single Milichrom of the new generation needed any serious fix for 25 years after it was created by your followers: Grisha Shoikhet, Vitya Kargaltsev, Edik Kuper, Tolya Ledenev, Yura Bolvanov, Grisha Baram, and Misha Perelroizen, who, as you remember, was sent here in exile by Gersh Itskovich Budker.

You see, we live in a consumer society, and we do not need many devices. You produce 50,000 liquid chromatographs of two dozen models, and that’s it, the market is full. So you concoct new models and foist them on the consumer, but your consumer is smart and doesn’t buy a new device because the old one works like a Swiss watch.

What is to be done? as said Chernyshevsky and Lenin. “Brilliant!” managers exclaimed, “we’ll put a chip in each device and program it to short-circuit as soon as the guaranty ends. Or another idea. We impose a levy on consumers by taking annually 20 % of the device’s price ‘for maintenance’.” Don’t you see?

The idea to create a set of biochemical ultramicromethods struck Lev S. Sandakhchiev as early as 1966 when he bade farewell to his research into transfer RNA and suddenly decided to study the biochemistry of individual living cells of a Mediterranean alga, Acetabularia mediterranea.

The first microspectrophotometer designed in Novosibirsk, MSFP‑1, made it possible to handle the columns with a volume of one-millionth of a cubic centimeter; correspondingly, all accompanying biochemical manipulations required a binocular microscope and micromanipulators. 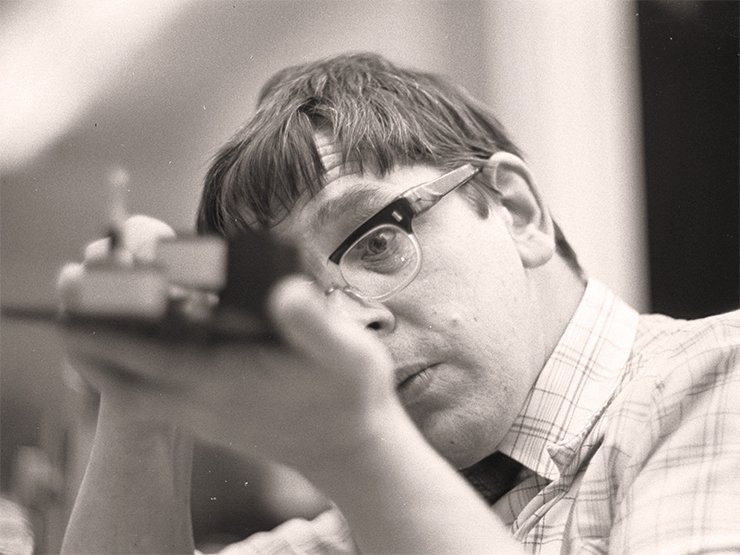 However, histology appeared as early as the 19th century, and manipulations with individual cells had become a routine procedure by the mid‑20th century. The cell contains very high concentrations of various compounds, such as nucleic acids, proteins, polysaccharides, and lipids; thus, their distribution in the cell is easily traceable with the help of specific dyes and microscopes, optical and electron ones. It is possible to stain substances and visualize them, but no one in the 1960s could even dream that the substances observable under a microscope could be isolated in a chemically pure form and their structure could be determined. I would venture to suggest that Sandakhchiev was undoubtedly among the first scientists who took up the challenge.

Sandakhchiev was interested in many things, for example, such extremes as speleology, the study of caves. One of his interests was the card game Preference. Fate brought him behind a card table together with Sergei Vladimirovich Kuz’min, a genius optician and designer, laureate of the USSR State Award and dissident, at that time a senior laboratory technician at the neighboring Institute of Thermophysics without any higher education and a salary of 70 rubles per month, and dreaming of becoming the world champion in bicycle racing (Grachev, 2004)

Freedom reigned in fabulous Akademgorodok in Novosibirsk, and everything seemed feasible. For this, we should thank not only Sandakhchiev, but also Mikhail A. Lavrentiev, the founder of the Siberian Branch of the Academy of Sciences, and Dmitry G. Knorre, our boss, who just did a very important thing – ​he did not interfere. 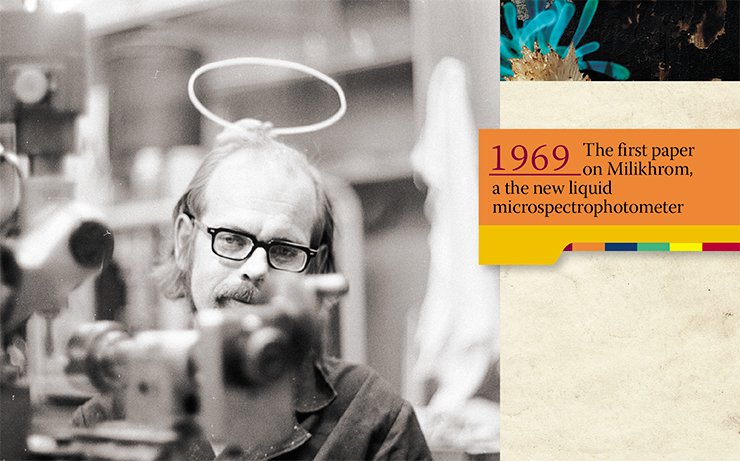 No sooner said than done. Young researchers did not waste their free time in the evening and played cards, especially the game of preference. This was how Sandakhchiev met Sergei V. Kuz’min, an optic technician, who was then famous for having crushed the kitchen card- table at one blow for the violation of the canon “No good lead? Don’t whist.” Well, Lev set Sergei a problem just as a bet: “I bet you cannot design a microspectrophotometer that would be 10 000-fold more sensitive than the best foreign analogs.” Naturally, Sandakhchiev lost the bet. Sergei did the job in 3 months and won 210 rubles (At that time the monthly pay of an optic technician was 70 rubles). See the other details in the relevant research papers (Kuz’min et al., 1969).

The differences are fundamental

Then everything was very simple. What is the fundamental difference? It is quite good when the device is 10 000-fold better than the world level. First, an ordinary biochemist had to use a micromanipulator, which was a major inconvenience, and, second, which is much more important, it was very difficult to record ultraviolet spectra. The photometer “cuvette” of the MSFP‑1 was just the lower part of a microliter-scale chromatography column; light fell to its side, perpendicular to the column axis. 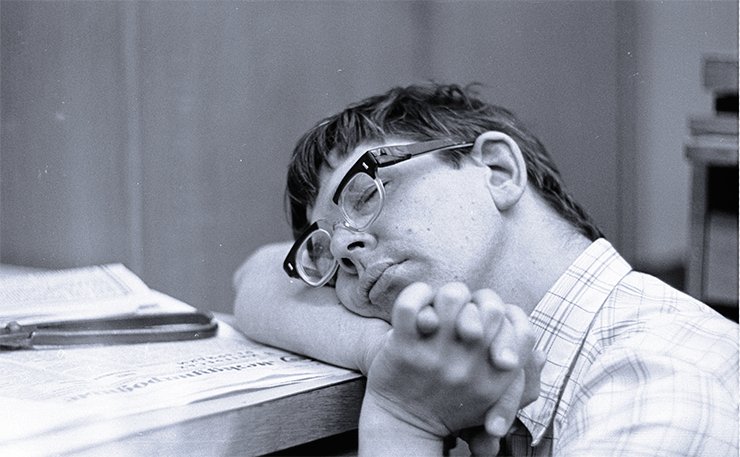 Here I am proud to say that it was my idea to make a microcuvette of fused quartz with parallel-sided windows. One window was a simple cylinder the size of a shirt button, and the other, an analogous thing with four holes. Polyethylene capillaries were tightly drawn into the holes and cut off on the inside with a razor blade. Then it was even simpler: we had just to assemble the cuvette by taking the first window, then placing on it a Teflon gasket seal half a millimeter thick, with two slits in it, and mounting the second window to hold the future microcuvette in clamps. Thus, the microcuvette was ready (Baram et al., 1983). 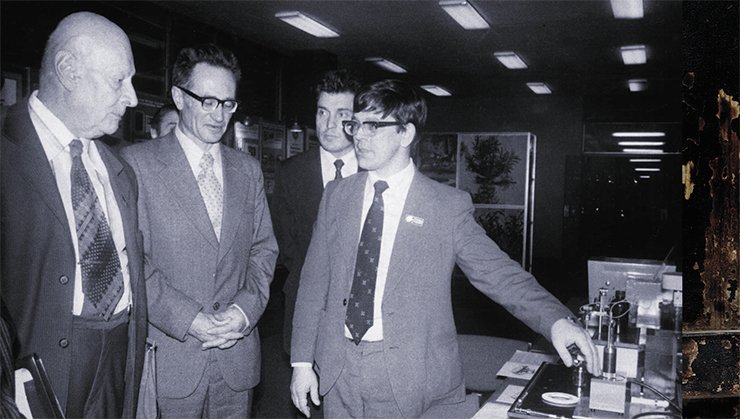 “…I immediately wanted to apply this new method to ordinary, i. e., not unicellular, biochemistry, in which I was then involved. The workshops quickly manufactured a second such device. A year later, I and my colleague, Sasha Girshovich, sent out the first publication about the data collected through this device to the international journal BBA. They didn’t take it. The reviewer had gotten to the root of the matter: he simply wrote “it’s impossible to work on such a scale.”
And he was right. Once, Sasha and I spent a couple of days working on the problem. Nothing came out of it. The reason turned out to be simple: the chromatographic microcolumn had to be placed deep within the device, and solvent had to be injected blindly. The column was so small that we simply lost it, and injected the solvent into the device without realizing that there was no column inside.
For ordinary biochemistry, in order to obviate the micromanipulator, we expanded the device’s scale by ten times, and we still achieved a sensitivity level 1,000 times greater than what the rest of the world was capable of.”

You see, the solution was as plain as day. Now it was possible to drive a beam of light between the two slits and to construct a two-beam spectrophotometer based on this parallel-sided microcuvette (Kuz’min, 1974), as well as all the other key units of a microcolumn liquid chromatograph. This allowed the most precise recording of ultraviolet spectra and measuring the so-called optical density, i. e. the assigned problem was solved. Frankly speaking, the cost was a tenfold decrease of the sensitivity of the new device, Ob‑4, the great-grandfather of Milikhrom. That is all. 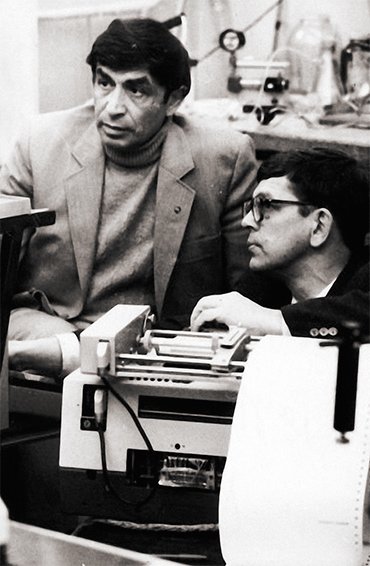 My cuvette has been in service for 50 years. This has been verified, and the chromatograph Milikhrom is the best in the world market. Just believe me.

What was the fundamental difference of Milikhrom from the other spectrophotometers of that time? Just take the reference Cary (United States) spectrophotometer, still in use. It is a two-beam device with the light beam alternately directed to the sample and reference cuvettes. Then the reference signal is subtracted from the sample signal to get the precise optical density value at a given wavelength. The device has outstanding metrological characteristics. However, it is, first, rather unsuitable for microspectrophotometry and, second, it has a too intricate optical arrangement.

FIRST OF ALL, GENIUS IS NECESSSARY
By the beginning of the 1990s Russia had manufactured 6,000 Milichroms, great-grandchildren of the first microspectrophotometer, for a multitude of applications: science, forensics, pharmaceuticals, environmental protection, etc. During the perestroika years, a private company in “poor Russia” managed to manufacture and sell about 100 A‑02 Milichroms, assembled from components made in various parts of the world, but still based on S. V. Kuz’min’s original microspectrophotometer, for $ 30,000 each. Why? The answer is simple: in a commercial laboratory, the use of this instrument covers the initial cost within a year after purchase.

The Swedish firm LKB, the then world leader in scientific instrumentation, bought the license to use Kuz’min’s invention. My knowledge of English and the genes of my “red merchant” father came in handy. Under the leadership of the Russian foreign trade agency LICENSINTORG, I passed a useful school of international trade in intellectual property. Later, this turned out to be very useful at Lake Baikal. We received $ 60,000 dollars and a wonderful Swiss milling machine, at which I later spent many months manufacturing new accessories for the Milichrom.
These days, people dream a lot about “innovation.” Managers understand three things poorly. First of all, innovation requires crazy ideas, for example, growing a Mediterranean alga in the middle of Siberia. Second of all, talent is needed, and, better still, genius, which does not promise, but makes a workable object. As a rule, talented people and geniuses are very inconvenient and difficult to manage. However difficult it may be, one must tolerate them. Thirdly, the risk of failure is very high, and it’s a long way towards application – ​usually about 10 years. But a single Milichrom covers the expenses of dozens of academic laboratories. Geniuses do not appear in a building simply because it has a sign that says “Technopark.”

Reliability of this device is guaranteed, first and foremost, by the fact that is has only two mirrors instead of eight, which reduces the likelihood of its failure. 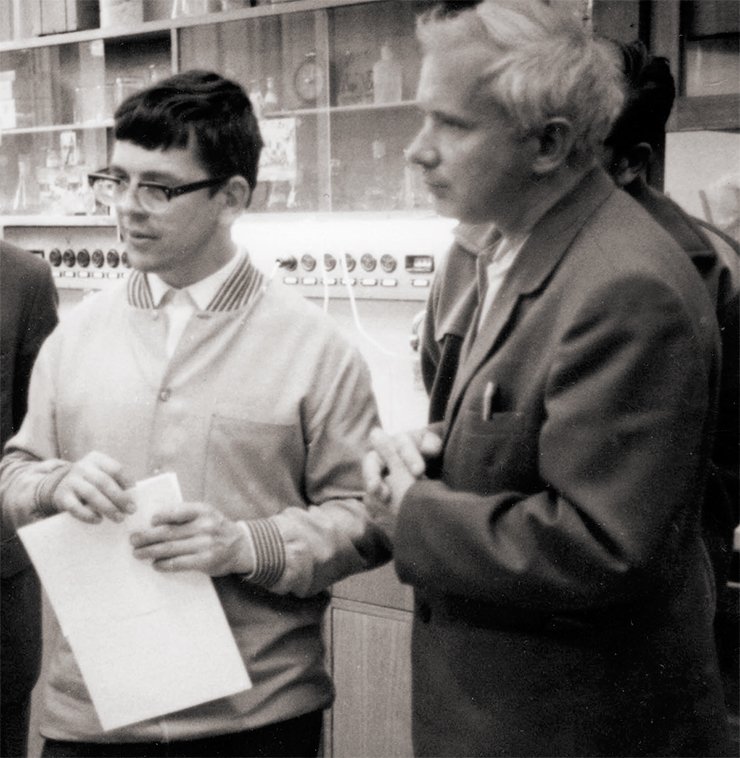 What is the current state of “Milikhrom building”? It is perfect if we forget about the absence of money. Milikhrom has been in service for 50 years. It has no programmed death and will never have.

Editorial board thanks G. Filippova for assisting in the preparation of the paper and G. Baram for his photos