The idea of life existing in the interior of our planet was first put forward by the famous writer Jules Verne in the late 19th century. His heroes led by professor Lidenbrock set out on a journey “to the center of the Earth” and discover there, apart from dinosaurs and primitive man, a huge subterranean ocean. In his novel, the great science fiction writer, often called a seer, once again foretold the future: a century later, life was indeed discovered underneath the oceanic bottom – those were not prehistoric pangolins though but microorganisms with unique metabolism living in the “ocean” of pore water and capable of existing in virtually “unearthly” conditions

The study of the deep biosphere began back in 1968, when the Glomar Challenger, a specially outfitted American research vessel, drilled its first hole in the ocean floor of the Gulf of Mexico and continued within the frames of the international ocean drilling projects involving the new drilling ship with a symbolic name JOIDES* Resolution, named for the sailing ship of James Cook, a famous seafarer of the 18th century.

Deep water programs included chemical analysis of the waters contained in deep bottom sediments. The rates of the reactions occurring in these pore waters suggested the existence, in the interior of sea-floor sediments, of active living bacteria deriving energy necessary for their life activity from oxidation-reduction reactions. In the late 1980s, microbiological studies of deep sea-floor sediments started, which produced startling results (Bell, Heuer, 2012). 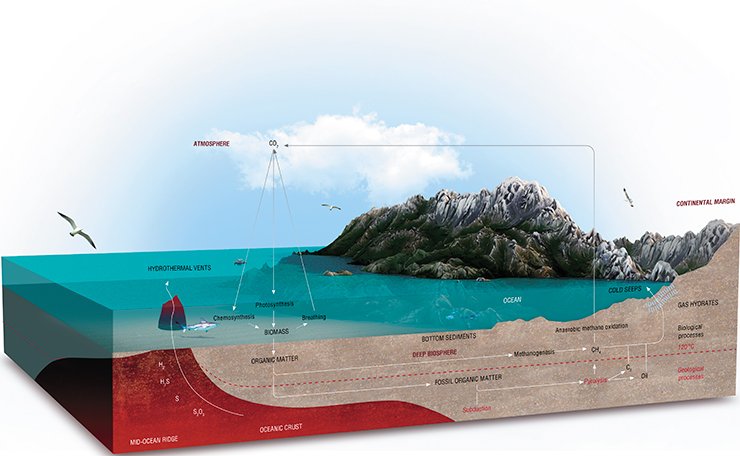 In the late last century, the first data of microorganisms’ activity profiles, total number and diversity of their forms in the deep layers of sea-floor sediments were obtained, which proved convincingly the existence of the deep biosphere (Cragg et al., 1990; Gold, 1992). The notion itself of the deep biosphere emerged later though. Today, we use it to denote the immense ecosystem of sediments under the sea floor, which include a variety of microorganisms (bacteria, Achaea and fungi) with an active metabolism and propagation.

So where does the deep biosphere begin? According to most research, its upper boundary lies at about 1 meter below the sea floor, and in its extent and volume it rivals the World Ocean. So far no samples of deep sediments without life have been discovered. An estimated biomass of the deep biosphere microorganisms is up to 70 % of the biomass of all microscopic dwellers of bottom sediments including the upper layers (Whitman et al., 1998; Parkes et al., 2014).

The greater the sediment depth, the tougher the living conditions: pressure grows, temperature rises up to 60—100 °С, and there is almost no oxygen. These conditions would seem extreme for the dwellers of water and upper sedimentary layers – and yet, microbial life in deep sediments is quite diverse though the characteristics and members of the microbial community vary with depth.

Today, microorganisms – bacteria and archaea – have been discovered in the sea floor sediments at a depth over 1.6 km below the bottom level, and direct measurement of cell activity testifies to the presence of alive microorganisms in the sediments older than 16 million years (Roussel et al., 2008; Ciobanu et al., 2013; Schippers et al., 2005). Molecular-genetic studies of deep sediments from different areas of the World Ocean reveal a great variety of microbial communities, many of which are unique and(or) so-called non-culturable microorganisms that cannot be grown in laboratory conditions (Orcutt et al., 2011). The microorganisms themselves and their DNA have been discovered not only in marine sediments but also under the land surface in hydrocarbon reservoirs and water bearing layers lying at a depth of several kilometers. 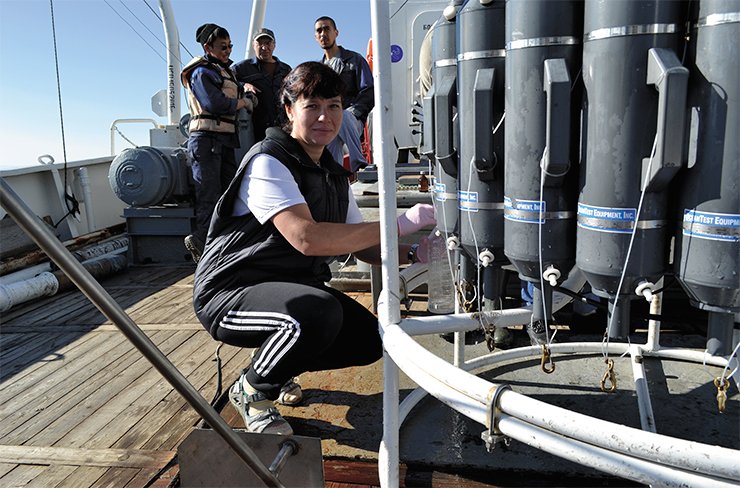 There are locations where the deep biosphere comes in contact with the surface biosphere – these are zones of high tectonic activity, where “hot” deep sediment horizons or the basaltic crystal shell evolve gases and fluids – additional sources of hydrocarbon and energy (Boetius, Wenzhöfer, 2013). The upward flows of hydrogen and acetate, as well as of methane and other hydrocarbons, forming in the depth of sediments entrain their microscopic dwellers to the upper horizons (Hubert et al., 2009).

Deepwater drilling on Lake Baikal was done under the Baikal-Drilling international program involving Russian, American and Japanese researchers. In 1993, the first 100-meter hole was drilled near the Buguldeika closing dike, and three years later drilling in the lake sediments along the Akademichesky Ridge helped to examine the distribution of organic carbon and biogenous silica in diatoms and to obtain the first data about the diversity of deepwater prokaryotic microorganisms (Kuzmin et al., 2000)

One of these localities is Baikal – the deepest freshwater lake of the planet. In its bottom sediments there are seeps of oil- and gas-containing fluids, mud volcanoes and deposits of methane gas-hydrates. In certain select areas of the lake, oil and gas reportedly migrate towards the bottom surface from the depths of 2-7 km having pressure-temperature conditions (Kontorovich et al., 2007; Khlystov et al., 2013). Abnormally high concentrations of separate ions contained in the pore water of the surface sediments found in these zones can derive from the traverse through them of highly mineralized deep fluids (Granina et al., 2001; Pogodaeva et al., 2007). Supporting this conclusion is the fact that the upper layers of the bottom sediments of mud volcanoes contain sections of ancient diatoms, whereas in tranquil sedimentation areas they occur at a depth of 300 meters (Bradbury et al., 1994; Klerx et al., 2003).

All these data indicate that, in the areas of deep-water discharge on Lake Baikal, dwellers of the deep thermophilic microbial community may get into the cold (about 4 °С) surface sedimentary layers together with the flows of bottom deposits.

A conifer marker made of diatoms

Experimental research of the deep-water biota of Baikal sediments in hydrocarbon discharge areas, where organic matter is transformed by the microbial community, has been conducted since 2012 by the Hydrocarbon Microbiology Laboratory of the Limnological Institute, Siberian Branch, Russian Academy of Sciences (Irkutsk), under the guidance of Doctor of Biology T. I. Zemskaya.

The experiments are carried out at a temperature of 80 °С and pressure of 49.5 atm – these are the conditions typical of Baikal’s tectonically active zone. Special-purpose pressure tanks, developed and assembled at Nikolaev Institute of Inorganic Chemistry, SB RAS (Novosibirsk), ensure continuous cultivation of microorganisms in a gaseous environment with automatically controlled pressure and temperature. Sediment samples “packed” in sterile glasses and enriched with the biomass of the germ-free Synedra acus diatom were put into the pressure tanks and cultivated at high temperature and pressure.

In the eleven months of the experiment, the organic material of the sediments was transformed by 17.4 %. The analysis of the mother substance and product performed at the Laboratory of Petroleum Geochemistry, Trofimuk Institute of Petroleum-Gas Geology and Geophysics, SB RAS (Novosibirsk), has shown that as a result of the experiment the contents of organic carbon and bitumoid have decreased whereas a new component, tricyclic aromatic hydrocarbon retene, has emerged. This is a most unexpected result since this kind of hydrocarbon is normally used as a biomarker of the biomass of coniferous plants. The formation of retene during the experiment proves that this carbon can be synthesized in the process of the destruction of diatoms accomplished by the microbial community of Baikal’s deepwater sediments. 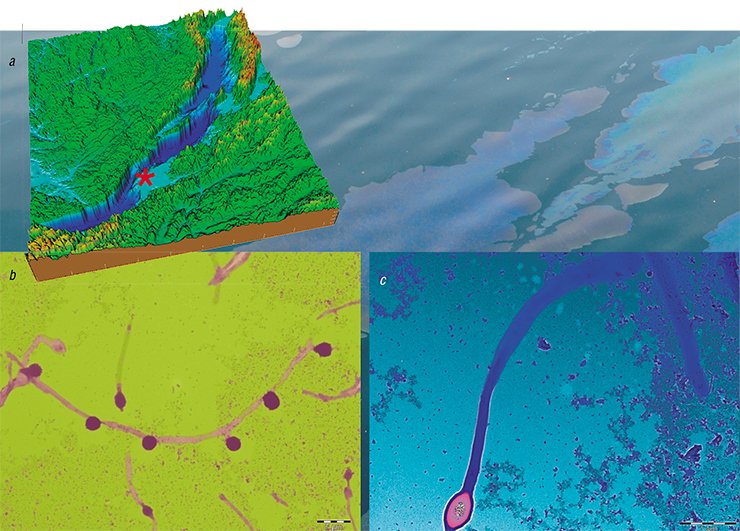 After the experiment, the bottom sediments also revealed a wide range of nucleotide sequences. The analysis using a popular genetic marker – a fragment of the 16S rRNA gene coding a protein of the bacterial ribosome – has shown that they belong to microorganisms with different metabolisms: purple nonsulfur bacteria capable of growing in anaerobic conditions due to the oxidization of organic compounds; seawater and freshwater hydrocarbon oxidizing microorganisms; anaerobic non-culturable metanotrophs; and unique bacteria the phylogenic status of which has not been identified yet.

The Posolskaya Banka is a submarine elevation situated on the borderline of the Southern and Central Depressions of Lake Baikal. A study of the heat flow anomalies as well as seismic and acoustic research have shown that this area features an active migration of gas-saturated fluid flows, some of which are of deep thermogenic origin (Klerkx et al., 2006; Naudts et al., 2012). The gas-containing fluid carries viable thermophilic microorganisms to the sedimentary upper layers

Long-term cultivation of bottom sediments has encouraged the proliferation of some viable thermophilic microorganisms in the enrichment culture. One of them is a thermophilic facultative anaerobe of the genus Paracoccus with mixotropic (mixed) metabolism, i. e. is capable of growing both in the presence of “ready-made” organics and molecular hydrogen and carbon dioxide. These properties allow us to label this strain as a probable participant in the transformation of the organic matter of Baikal bottom sediments. 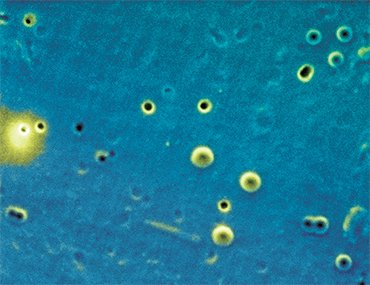 Further cultivation at a temperature of 60 °С has revealed other species of thermophilic microorganisms: actino­mycetes of the genus Planifilum and bacteria of the genus Thermaerobacter. Interestingly, the latter was isolated at a depth of 10,897 meters from the sediments of the Challenger Deep, a mud volcano of the Mariana Trench, one of the most enigmatic and least studied locations of our planet.

Baikal’s deepwater microorganisms have turned out to be no less obscure than the dwellers of the famous Mariana Trench. On the one hand, they have a high similarity percentage with bacteria and Archaea occurring in hot springs, subsurface sediments, sediments and soils polluted with hydrocarbons and in the hydrate-containing seafloor sediments of marine ecosystems. Like these microorganisms, they exist thanks to the hydrogenotrophic methanogenesis and H2-dependent decomposition of buried organic matter. On the other hand, the examination of the total DNA from the sediments has revealed unique clones with the metabolic routes that are anyone’s guess.

Of special interest is the ability of Baikal’s deepwater microorganisms to synthesize retene. Baikal oils are known to be “young” and are considered unique because of a high number of “fossil” molecules (chemofossils), such as sesquiterpаnes, secohopanes, steranes, oleananes and others (Kontorovich et al., 2007). According to our data, retene can be added to the list of Baikal oil biomarkers.

The genus Paracoccus bacteria are an example of micro­organisms with micotrophic (mixed) metabolism capable of feeding on both organic and inorganic substances. The structure of their electron-transport chain is similar to that of mitochondria – intercellular organelles of higher organisms originating from symbiotic bacteria. These specific features allow them to survive at different concentrations of oxygen, “switching” from oxygen (aerobic) to oxygen-free (anaerobic) metabolism (Baker et al., 1998)

These results testify that the study of the microorganisms coming from Baikal deep water can be meaningful for establishing the sources of the formation of fossil hydrocarbons and evaluating the contribution of these microorganisms in their formation and destruction. In addition, bearing in mind that retene is conventionally used as a biomarker of coniferous plants in the study of recent changes in biological communities, these data allow for a more correct interpretation of the processes that occurred in the distant past.

The authors thank Academician M. A. Grachev for his assistance in organizing their research of Lake Baikal’s deep biota