Being the largest fresh water lake in the world, Baikal is unique not only because of its size and depth but also because of its strikingly clear water. At the same time, several tons of oil rise to the surface of the lake from its deep water deposits every year. However, the oil contamination does not spread over the whole lake, which attests to the fact that there exist special natural purification mechanisms. It is done by specific bacteria using oil carbohydrates as their food substrate. Such microorganisms can be used for a number of different purposes in biotechnology, from water purification to organic synthesis

Oil in the world heritage lake: even this word combination itself attracts special interest of scientists working in a variety of fields.

The first mention of Baikal oil can be traced back to the works of German naturalist Johann Georgi (1729—1802), a well-known researcher of Baikal. However, a thorough research of Baikal oil was undertaken two centuries later.

Only quite recently the Siberian scientists have detected a high content of relict cyclane hydrocarbons in Baikal oil. To a considerable extent they inherit the structure of lipids, their predecessors, being constituents of live organisms. It has been proven that Baikal oil is undoubtedly biogenic in origin. In addition, specific products of bacterial oxidation of hydrocarbons have been detected in the oil (Kashirtsev et al., 2006; Kontorovich et al., 2007). 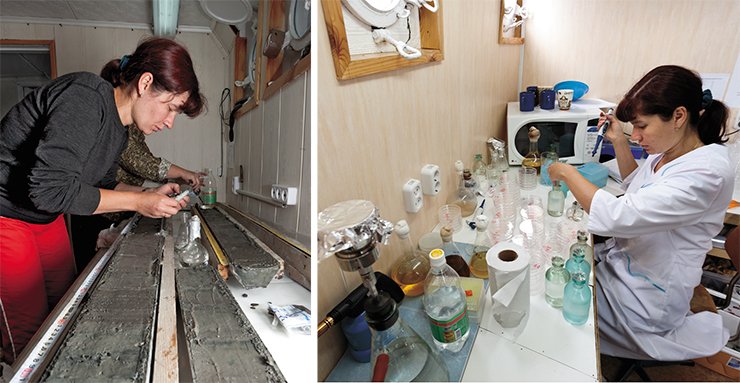 In the 1980s Baikal hydrocarbon oxidizing microorganisms became the object of research for a group of scientists from Limnological Institute SB RAS (Taliev et al., 1985; Goman et al., 1986; Petrova and Mamontova, 1986). A new wave of studies of unusual Baikal microflora was initiated with the discovery of a new deepwater oil seep, the parameters of which are completely different from those known before.

A new oil seep located close to Cape Gorevoy Utes (Middle Baikal) was discovered thanks to the analysis of images received from satellites. In 2003, a dark spot 1 km in diameter was spotted in Baikal ice for the first time, while the observations that followed showed that it appears regularly. In July 2005 numerous oil spots were discovered on the water surface in this area, while acoustic sounding showed that there is an underwater acoustic anomaly, a 500 m high torch (Khlystov et al., 2007).

It turned out that 2—4 tons of oil from the bottom sediments in these two areas are fed into Baikal annually (Kontorovich et al., 2007). Nevertheless, water contamination is observed over a limited region, which attests to the fact that there exist intensive natural purification mechanisms. 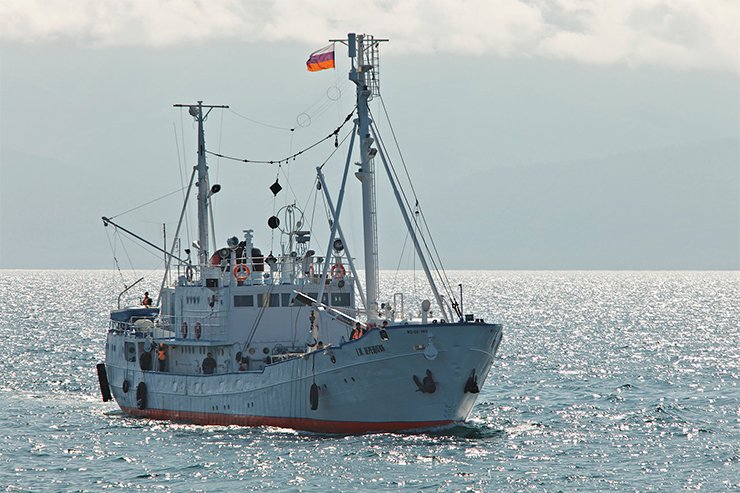 Research into hydrocarbon oxidizing microorganisms responsible for the disappearance of oil spots from the water surface started about a hundred years ago (Shongen, 1913). However, until now search for and selection of natural microorganisms-destructors of substances contained in oil present one of the important tasks in applied microbiology

Knowledge about the activity of microorganisms which provide water cleanliness in conditions of oil contamination, their phylogenetic diversity at the time new oil presence was detected were limited to the data published in scientific literature. It should be pointed out too that the latter mostly concerned research conducted on oil reservoirs or other natural world ecosystems deposits.

For this reason, since 2004 a systematic study of microorganisms playing such a significant role in the processes of natural biodegradation of Baikal oil has been undertaken in the Limnological institute SB RAS.

Studying the microbe community in two new oil seeps made it possible to establish the patterns of spatial distribution of hydrocarbon oxidizing microorganisms. Their highest density was detected in the surface water samples containing oil film as well as in natural layers and in bottom layers and sediments (Pavlova et al., 2008). 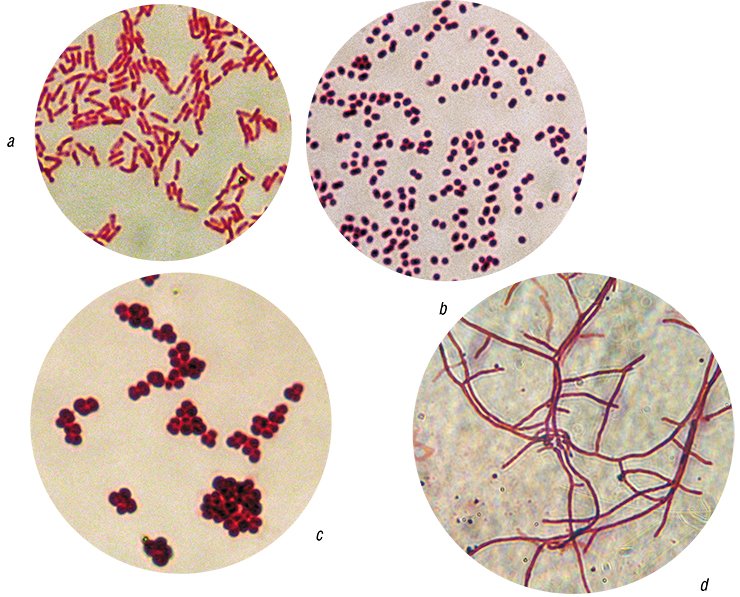 The discovered strains of hydrocarbon oxidizing microorganisms became s part of a unique “live” collection. All of its “exhibits” developed as a result of a long evolution and adaptation to very specific conditions of Baikal, with its large depths, a long ice age and a very low average annual temperature of the water layer (+3,4 °С).

When studying genetic diver­sity of hydrocarbon oxidizing micro­organisms, alk genes responsible for oxidation of a broad range of n-alkanes have been detected in the majority of strains (86 %) (Lomakina et al., 2009).

This was the beginning of a search for the strains, which are the most active and stable to oil impact and at the same time suitable for biotechnological purposes such as the creation of an association of microorganisms-destructors of oil contaminations. 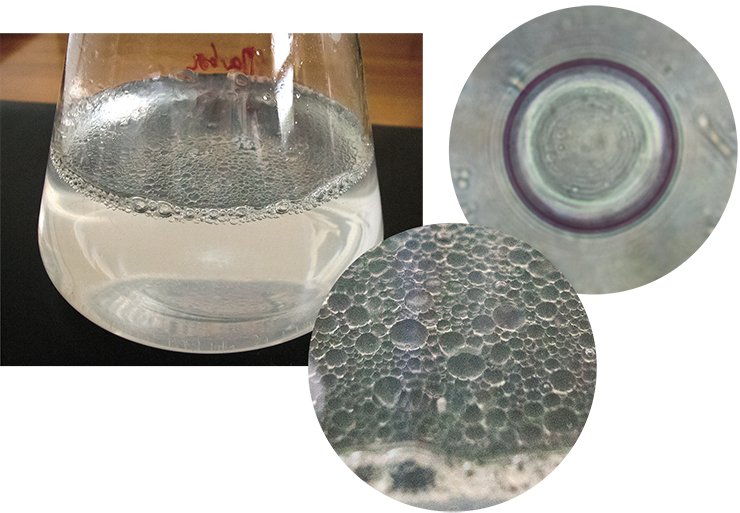 Such species should be able to produce surfactants, substances which diminish moisture film cohesion and make the formation of emulsions (tiny drops of one liquid in another one) easier. Another name for surfactants is synthetic surface active substances (SSAS). These compounds are the necessary components of any washing powder or detergent.

Many microorganisms and some plants are capable of producing SSAS. In order to differentiate between surfactants of biogenic origin and those synthesized artificially, the prefix bio- is added to the names of the former. 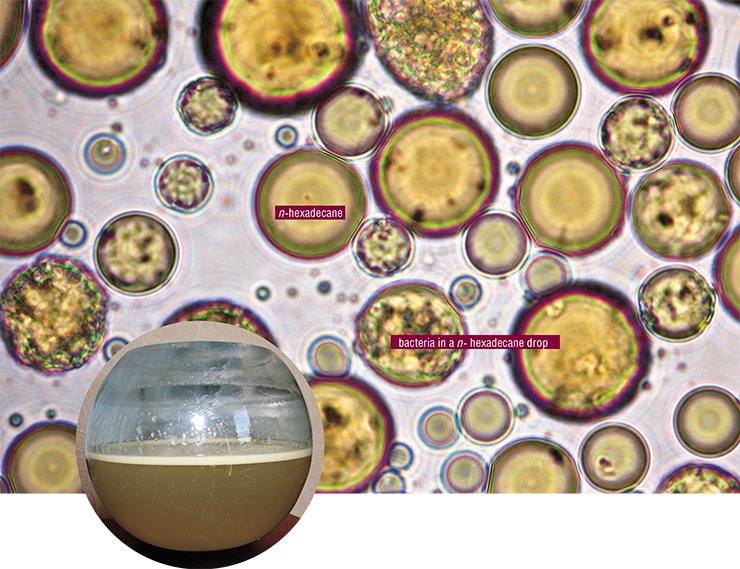 At present bio-SSAS are drawing particular interest, both theoretical and practical. It is conditioned by a broad spectrum of possibilities for their use in oil extraction, mining, chemical, pharmaceutical and food industries as well as for cleaning the environment from contaminants, such as hydrocarbons and heavy metals.

The efficiency of biosurfactants is not less than that of synthetic substances. Also they have some advantages: they are capable of decomposing in natural environment and are not toxic. In addition, bio-SSAS are received from renewable resources, which makes them very perspective for the development of new ecologically safe technologies (Gogotov et al., 2006).

The cold is not an obstacle

Carbohydrates oxygenizing microorganisms have been studied quite extensively. Over the last decades, several dozen bacterial preparations intended for the introduction of such microflora in oil-contaminated water have been developed and found practical use.

At the same time, the ability of the majority of bacteria-destructors to process oil and oil products considerably decreases at temperatures lower than +10 °C. There are only a few studies devoted to the discussion of isolation and selection of microorganisms capable of functioning under such conditions. At the same time, Baikal bacteria-oildestructors are initially adapted to very low positive temperatures. 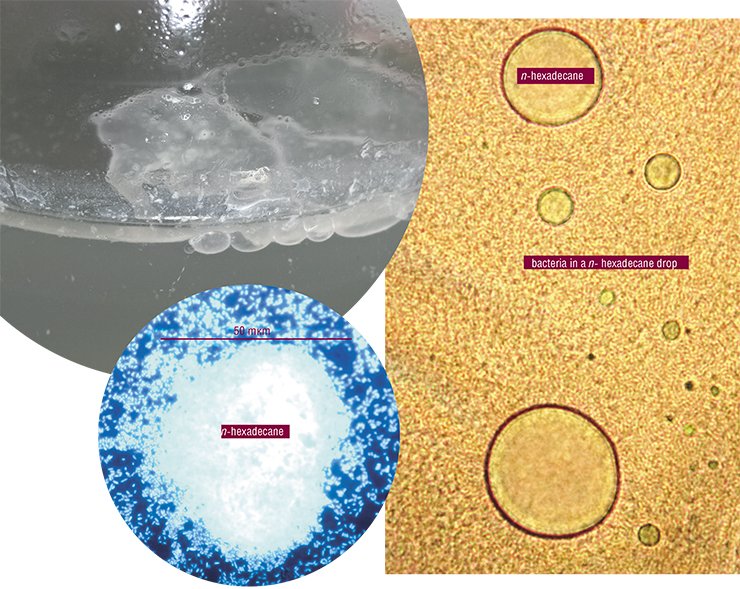 The capability of two types of carbohydrates oxygenizing bacteria to synthesize surfactants has been studied in the laboratories of LIN SB RAS, namely Rhodococcus erythropolus and Pseudomonas fluorescens. To do this, strains were cultivated in water with mineral substances and n-hexadecane carbohydrate (its share in oil is one of the highest).

After a 4-day cultivation, bacterial biomass grew considerably. Light and fluorescent microscopy helped to show that on the fourth day of the experiment the R. erythropolus cells penetrated directly into carbohydrate drops, while P. Fluorescens cells localized on their surface. Similar results were obtained by other researchers (Zvyagintsev, 2001). For example, microscopic analysis of Rhodococcus bacteria showed that they were first detected on the surface of n-alkane and during the subsequent substrate utilization they were also detected inside carbohydrate drops.

The capability of microorganisms to synthesize biosurfoctants is traditionally evaluated by decreased apparent cohesion on the border of liquid medium-air. Already the first experiments have shown that the цvalue of water emulsion in lipid extract biomass R. erythropolus decreased by approximately 27 mH/m, while that of P. fluorescens, by 19 mH/m. 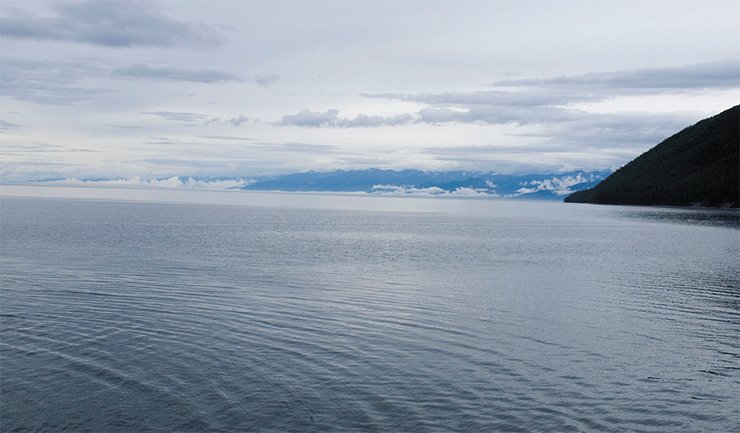 These data support the hypothesis that Baikal strains synthesize a considerable amount of surfactants and can be considered perspective as bio-SSAC producers.

Thus, as a result of work of a team of specialists from LIN SB RAS in the areas of natural oil seepage a microbe community was discovered and thoroughly studied. This community makes a considerable contribution in the process of natural self purification of the lake water from oil contamination.

The obtained results are important not only for fundamental research. In the longer term, it will become possible to create microorganisms – destructors of oil contamination from aboriginal, adapted to functioning under low temperature conditions. It is important to remember that the scale of oil contamination of water basins on the planet is constantly growing, especially in the cold northern regions.

The photos are the courtesy of the author