Why Does the Cleaner of Lake Baikal Need Dental Crowns?

A tiny copepod—Epishura baicalensis—is one of the most well-known Baikal endemics. This dominant zooplankton species of Lake Baikal is a critical element in the food pyramid of the freshwater ocean. It feeds on bacteria and unicellular algae and is itself food for the Baikal omul and other pelagic fish.

This copepod is capable of filtering about one cup of water per day, thereby participating in the cleansing of Lake Baikal. However, there is also research interest in this aquatic invertebrate itself: its biology and ecology still keep a lot of secrets—from its strong silicon teeth to speciation

Epischura baicalensis is a planktonic organism (from the Greek planktos, which means “wandering” or “drifting”) inhabiting the water column of Lake Baikal. Like most planktonic organisms, it has a relatively small size (about 1.5 mm) and is almost transparent. It also feeds on plankton, but on photosynthesizing species only (small unicellular algae), and on bacteria.

Epishura gets its food by using a set of mouthparts, which create a flow of water from which it picks out edible objects. Epishura’s feeding process is, in fact, no different from that of other copepods. Nevertheless, the life of this representative of a mots ancient arthropod group remains largely unknown to scientists. The food preferences of this copepod—Epishura is a picky eater—were previously described in (Melnik, 2004). Today, I will tell you about the research methods used to study this aquatic crustacean and the new exciting results on its population characteristics and the structure of its mouthparts.

How we catch plankton

To conduct a study, we need to catch a sufficient amount of copepods from different parts of the water body. To this end, the ship must have special equipment, i. e., an electric winch with the possibility to control the speed of the rope, special plankton nets, etc. 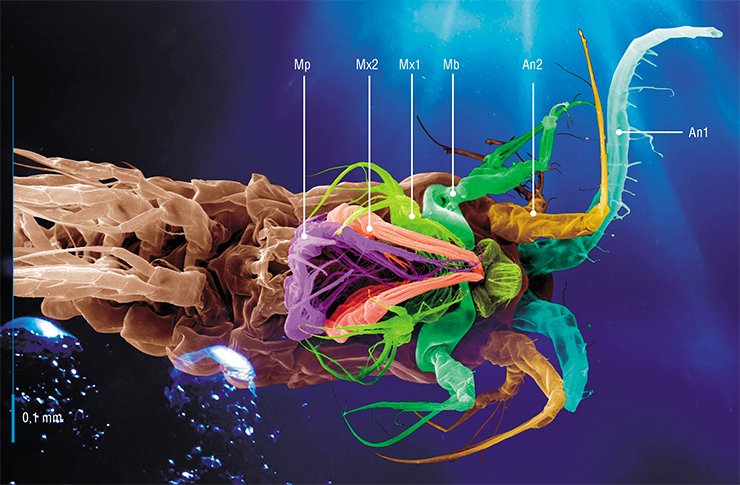 The shipping season for the fleet of the Limnological Institute starts on Lake Baikal in late May, as soon as the ice is gone. As a rule, the season begins with joint expeditions, when there is a team of chemists, physicists and biologists on one ship. Each of us has their own tasks; mine are to collect zooplankton samples for myself and other researchers. The samples are collected using zooplankton nets, in particular, Juday and JOM (a larger oceanic model of Juday nets), with an attached weight of 8—15 kg (the larger the net, the heavier the weight).

The nets are attached to the winch rope, lowered to the desired depth and then lifted at a certain rate (about 1 m/s). If a plankton net is lifted too quickly, water does not have time to go through the fine holes in the filtering part of the net and begins to push out the plankton we want to catch. On the other hand, if the net is lifted too slowly, the hunted organisms may smell a rat and flee. We also need to control the direction where the net is drifting, as well as the lifting speed, because the net may be pulled under the ship, where it will gather dirt and buildups from the bottom of the ship or tear off altogether.

Epischura is a genus of free-living crustaceans in the subclass Copepoda. Members of this genus are found in freshwater bodies across Asia and North America, including in the Great Lakes, in the Russian Far East in basin of the Amur River and, finally, in Lake Baikal, the world’s deepest and most ancient lake. The share of Epischura in Lake Baikal is about 80 % of all the crustaceans, and its total biomass in the lake is 60,000 to 950,000 tons, depending on the year and season. Epishura feeds itself by filtering food from the water with several pairs of mouthparts, which create a flow of water and simultaneously form a kind of a filter net to capture the desired food particles. The copepod is able to filter about one cup of water per day, thereby participating in the cleansing of Lake Baikal. Epishura feeds on bacteria and unicellular algae, mainly diatoms, and is itself food for other crustaceans (cyclops and macrohectopus) and for all pelagic fish (omul, golomyanka, sculpin, etc.). Thus, Epishura is an essential link in the energy transmission chain from phytoplankton to predatory zooplankton representatives and fish

In some cases, it is important to control the angle at which the net emerges from the water. When we need to take a sample from specific depths, we use a closing release mechanism, i. e., a special device using a messenger weight to close the net at a given depth so as to stop further filtering. In this case the net does not stop, and the researcher must calculate, from the speed of lifting the net and lowering the lock weight, the depth at which they will meet to lock the net.

It takes from 10–15 minutes to a few hours to collect plankton samples, depending on the quantity of samples at a particular point and on the depth to which the net is lowered. Lake Baikal is the deepest lake in the world, but we typically do not lower our nets to all its depth of more than 1,500 km, although we periodically take samples from a depth of down to 700 meters.

It is often windy on Lake Baikal, given a water temperature of about 4 °C, at the beginning of the expedition season. So, a good winter jacket, a hat and warm waterproof pants would be a good choice.

Oh, what big teeth you have!

One of the objectives of our research was to investigate Epischura’s mouthparts with a scanning electron microscope (SEM). There were similar studies in the past, but they used light microscopy. However, the SEM has a higher resolving power, and we were able to discover new facts as well as refine the existing data. 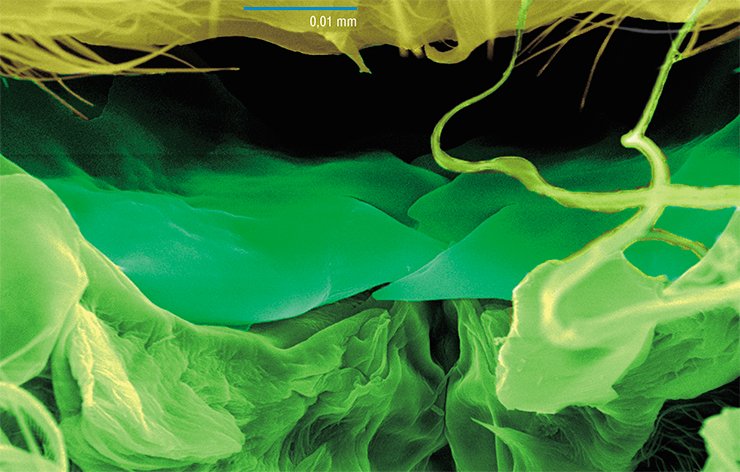 Among the unicellular algae that constitute the diet of Epishura baicalensis, the most important are diatomic algae, which are unicellular photosynthesizing organisms covered with a peculiar shell of silicon dioxide. One would need strong teeth to bite through this shell, and Epishura has got such teeth. More precisely, it has a special crown on one of the teeth in its jaw (mandible).

Using a FEI QUANTA 200 SEM and a special probe, we found that the composition of these solid dental crowns includes silicon. Moreover, when these teeth grind down or break over time, they are replaced by new ones. Similar silicon crowns were found in other species of Epischura; only their silicon content was different. It turned out that this difference is due to diet, or rather, to the thickness and strength of the shells of the diatoms that are food to the copepods (Naumova et al., 2015.).

Silicon-containing structures are a rare phenomenon in animals: they more often contain the more widespread calcium. One can observe in different Epischura species how individual animals lose silicon if they begin to eat algae with a less strong shell or other planktonic organisms.

The next question in our research was whether Epishura forms one large population in Lake Baikal, or whether it splits into separate isolated or nearly isolated groups. 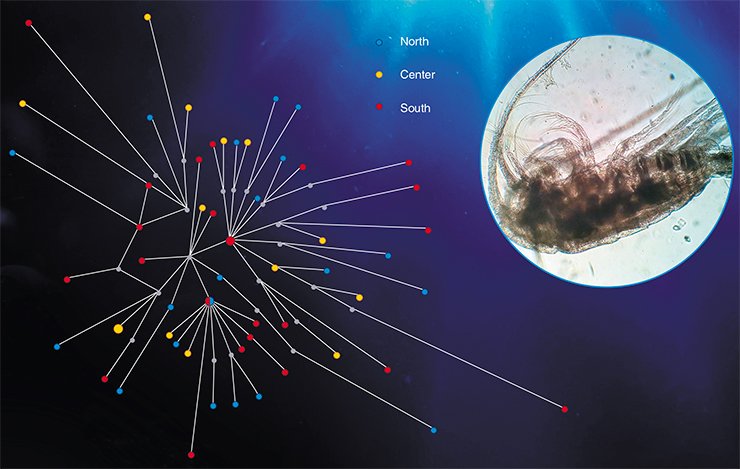 To answer this question, we compared fragments of the mitochondrial gene that codes the first subunit of one of the enzymes—cytochrome oxidase (COI), which was taken from Epischura individuals in different parts of Lake Baikal. The mitochondrial DNA was extracted from the copepods’ swimming legs in order to keep, whenever possible, the integrity of their body for further morphological studies.

When we conducted the standard polymerase chain reaction (PCR) and decoded the primary DNA structure, the nucleotide sequences were compared with one another to build the so-called haplotype trees. The haplotype is a unique set of linked genetic loci, and a haplotype tree unites identical DNA sequences into related groups.

It is known that changes (substitutions) are accumulated gradually in the DNA structure; the fewer such substitutions in organisms being compared, the closer they are to their common ancestor in the genealogical tree. Therefore, if the Epischura populations in different parts of Lake Baikal had lived and evolved independently in isolation, their independent evolution would have certainly affected the spatial distribution of the groups and group clusters of different haplotypes. However, the mitochondrial genes analysis showed a very different situation: it turned out that all of Epishura baicalensis live in Lake Baikal as a single huge population (Zaidikov et al., 2015.). 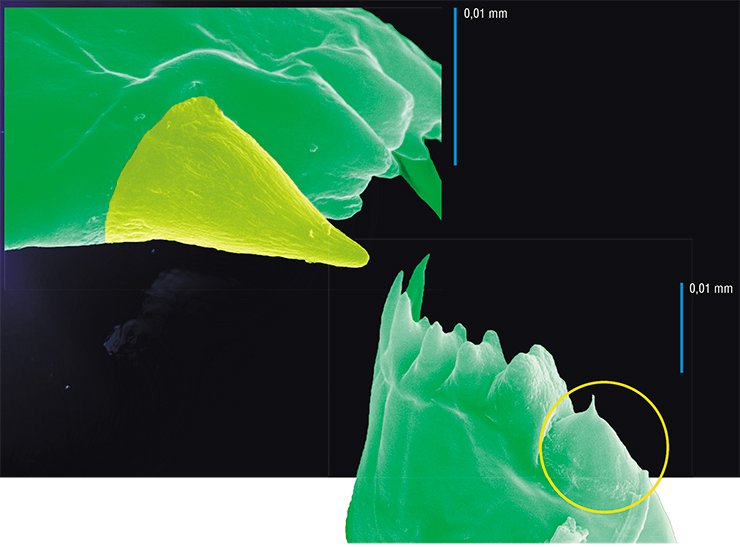 The studies of this tiny, almost invisible endemic copepod yielded interesting results for fundamental science. First, this representative of the plankton community has strong silicon teeth, which is extremely rare in the animal world.

Second, Lake Baikal has a length of 600 km and a width in some places as large as almost 80 km and is divided into three large basins by bottom uplifts. For a long time, scientists have had doubts that this copepod can have one single population throughout this vast space, which is cosmically huge for such a tiny being as Epischura. Apparently, it can. And when we figure out the causes of this phenomenon, we will come a little closer to the understanding of speciation on the Earth.

The publication uses photographs taken by the author