Is It Possible to Abolish Aging?

In their desire to extend human lifespan, researchers devise new and more sophisticated approaches. One of them is associated with a hypothesis on the role of the so-called senescent cells in the body, where they accumulate with age. Creating around themselves a specific microenvironment, these cells enhance the development of the age-related diseases, including cancer. It is reasonable to assume that escaping these signs of aging would be the key to the nature of aging and a healthy longevity. Correspondingly, it is not by chance that one of the first encouraging works in this field, published in 2011, has made, according to “Science”, the top ten outstanding results

Cell senescence is the phenomenon known in biology for quite a long time. After a certain number of divisions, the cell loses the ability to replicate its DNA and, correspondingly, to reproduce although it can retain its viability and metabolic activity for a considerable time span. Such cells are referred to as worn-out, or senescent cells. In current science, it is recognized that the phenomenon of cell senescence is one of the basic mechanisms able to prevent tumor development in a young organism: once a cell ceases to divide, it can no longer give birth to cancer cells. However, in an aging organism the probability of various “failures” able to induce development of cancer diseases increases. A senescent cell releases various substances capable of injuring the structure and function of adjacent healthy cells. Since the number of senescent cells in the body increases with age, correspondingly, the scale of injury of the healthy tissues increases as well. Scientists believe that this can eventually lead to the development of the age-related diseases, including malignant tumors. “Good citizens, bad neighbors,” this is how Dr. Judith Campisi (Buck Institute for Age Research, Novato, CA, United States) characterizes the senescent cells (Campisi, 2011).

Such is the irony of Mother Nature: the same mechanism – cell senescence – protects from tumor development in a younger age and, on the contrary, enhances tumor development in senility. And yet, is it possible to solve the problem of aging and development of age-related pathologies by removing the worn-out cells from an aging organism? This question currently remains a matter of argument, while one of the first studies – that of the team from the Mayo Clinic College of Medicine, Rochester, MN, United States, headed by Dr. J. van Deursen, in which they estimated the consequences of senescent cell clearance from laboratory mice – was distinguished by the esteemed journal Science (Baker et al., 2011). 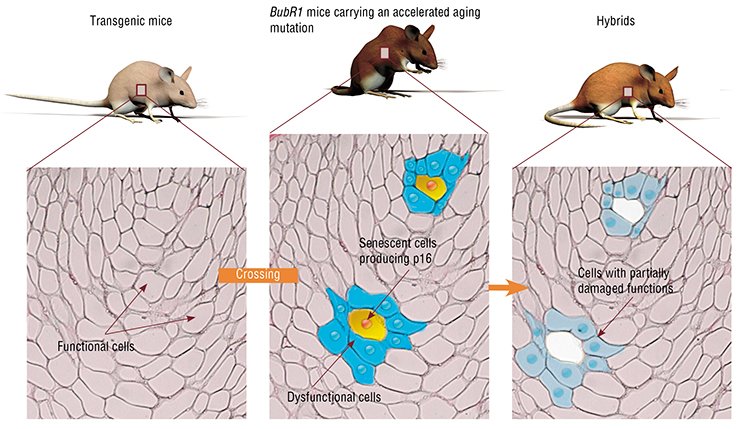 Researchers from van Deursen’s team tried to clarify whether the removal of senescent cells from the body would influence the lifespan and development of senescence signs in animals, including a decrease in their fertility, loss of depot fat, as well as development of cataract and muscle hypotrophy.

One of the major tasks of this study was to identify and selectively destroy the senescent cells. To solve this problem, transgenic mice were initially “constructed” using the hybrids of three mouse strains, each with a high likelihood of spontaneous tumor development. An artificially synthesized DNA fragment was inserted into these animals. This genetic construct contained the gene encoding a special enzyme, caspase-8, able to trigger the mechanism of cellular programmed death (apoptosis).

In this case, scientists have taken advantage of the known fact that the senescent cells (and no other cells) synthesize a specialized protein, p16Ink4a, which indicates cessation of cell division. The transgenic construct inserted into these mice was designed so that it started “working” simultaneously with activation of the gene coding for the p16Ink4a protein. Thus, only those cells that accumulated the mentioned biochemical aging marker, p16Ink4a, synthesized the apoptotic enzymes (although in an inactivated form). To prompt such aging cells to commit a suicide, the enzyme caspase-8 was activated by injecting mice with a special drug, AP20187.

These transgenic mice were mated to the rapidly aging BubR1 mice, whose lifespan amounts to only about 9 months (versus approximately 3 years for common mice) and which develop early the signs of senile diseases. The final hybrids displayed all the properties necessary for experimenters, namely, a high probability of cancer development, well-pronounced early signs of senile diseases, and the possibility to selectively and timely kill the senescent cells.

Part of the hybrid mice was injected with AP20187 at an age of 3 months, before the senescent cells started to destroy the structure and function of normal tissue; the remaining mice were injected at an age of 5 months, when the first signs of age-related diseases had already appeared.

The results of this experiment have demonstrated that the senescent cell removal at a younger age has a favorable effect on the animals: they displayed considerably less pronounced signs of senescence as compared with their rapidly aging parents. This effect, also evident at a later age, was yet somewhat less pronounced: the aging process was arrested, but the senile changes that had already taken place did not disappear.

Interestingly, the lifespan of all the mice from the experimental group did not increase: it amounted to approximately 9 months as that of the control BubR1 mice; then the animals from both groups died of a heart arrest.

In general, this is an impressive result taking into account the prospect of a new approach to treatment of the age-related and inherited diseases. However, there are still a number of problems unsolved by the authors.

First, the main result has not yet been achieved: despite a delay in the development of some aging signs, the elimination of senescent cells has failed to extend the lifespan of individuals. This approach has allowed only for health improvement and prolongation of an active life, although this is also of no little interest.

Second, an important question of fundamental importance remained unsolved, namely: what is the situation with tumor development when senescent cells are eliminated? Dr. van Deursen’s answer to this question asked by the author is that no tumor development was observed in these animals though the characteristic of the parental lines of genetically modified mice showed a high rate of spontaneous tumors. Presumably, the experimental individuals merely did not reach the age of cancer development. Currently, this research team reproduces this experiment with normal mice; however, the results will not be known soon taken the lifespan of normal mice.

Note that the hypothesis postulating a correlation between the accumulation of metabolic products in senescent cells, lifespan, and tumor development is to a certain degree confirmed by the data of other studies into cell aging. In particular, the substances inhibiting the protein mTOR kinase have been shown to inhibit cell senescence. Although this enzyme is still insufficiently studied, it is known that mTOR kinase is involved in the control of multiple cell functions, such as cell growth, division, and protein synthesis. It is believed that an inhibition of mTOR kinase activity is the key event in the regulation of lifespan and neoplasm development (Blagosklonny, 2008).

In particular, the antidiabetic drug metformin and immunosuppressant rapamycin are the substances inhibiting mTOR kinase (and, correspondingly, slowing down cell senescence).

Metformin is an antidiabetic the most frequently prescribed in the world practice: over 120 million prescriptions a year. According to statistical data, the risk of dying from cancer for the diabetes patients that have received metformin is by 25—40 % lower as compared with those treated with other antidiabetic medications, insulin or sulfonylurea, the latter increasing pancreatic insulin production (Taubes, 2012).

Currently, metformin has already saved from cancer more people that any other drug. It is still unclear whether this drug can be applied to prevent cancer in healthy individuals; this is the problem that scientists are yet to solve. However, the experiments with laboratory mice have demonstrated that metformin considerably extends the lifespan of individuals and inhibits tumor development (Anisimov, 2010; Martin-Castillo et al., 2010).

As for rapamycin, this drug has shown a similar effect in several experiments with various mouse strains (Demidenko et al., 2009; Harrison et al., 2009; Cao et al., 2011; Anisimov et al., 2010, 2011). The mechanism of rapamycin action has been studied in experiments both in vitro and in vivo. These experiments have demonstrated that an artificially induced cell division arrest and cell senescence become reversible in the presence of rapamycin. It has been also shown that rapamycin repairs genetic defects in the senescent cells of the patients suffering from a rare genetically determined accelerated aging syndrome, the Hutchinson–Gilford progeria. As a result, the corresponding cells for a long time retain the ability to divide.

Thus, the question on whether the removal of senescent cells from the body decreases the risk of cancer development, which is second in the list of mortality causes in the contemporary world after cardiovascular diseases, is still to be answered. Pharmaceutical mTOR kinase inhibitors may be more promising in this sense; however, this requires further studies involving healthy persons. Anyway, it is necessary to continue an active research into cell senescence in order to solve the problems associated with healing of age-related diseases in our ever more “aging” world.