A synchrotron radiation (SR) generator providing so far the brightest beam of photons was developed at the Budker Institute of Nuclear Physics of the Siberian Branch of the Russian Academy of Sciences (BINP SB RAS, Novosibirsk) and installed at the ALBA CELLS center (Spain) 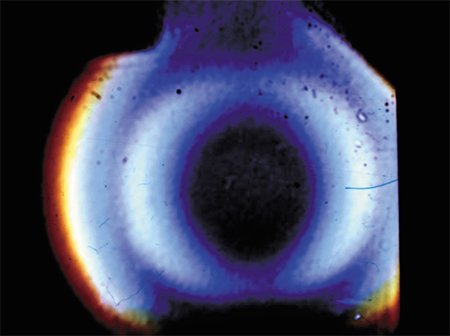 More than a hundred years ago, the German mathematician Gaspar Schott studied the properties of radiation emitted by an electron moving over a circumference and derived formulas that describe the spectral angular distribution of the radiation power of a relativistic charge. This was the beginning of the history of synchrotron radiation: this term was used to name the electromagnetic radiation generated during the motion of a relativistic electron (or another charged particle moving with a velocity close to the velocity of light) through a transverse magnetic field. In terms of its wavelength, this radiation covers a wide spectral range: from the infrared to x-ray spectrum.

The discovery of synchrotron radiation almost coincided in time with the discovery of superconductivity of metals, which is one of the most outstanding scientific events of the 20th century. The fates of these two important discoveries were surprisingly similar, because both of them were appreciated only half a century later.

The 100th anniversary of the superconductivity discovery was in 2011. The Danish scientist Heike Kamerlingh Onnes found that drastic decrease in electrical resistance (at least by four orders of magnitude) occurs in mercury cooled down below 4.2 K. Several hundred metal alloys and pure metals are currently known to behave as superconducting materials at extremely low temperatures.
In 1986 a superconducting state in ceramic compounds (mixed oxides of several chemical elements) was discovered. The transition temperature of these substances can reach 160 K.
Six Nobel Prizes in physics were awarded for superconductivity research, including Nobel Prize, in 1962, to Landau (USSR) for developing the Ginzburg-Landau theory of superconductivity; in 2003 to Ginzburg and Abrikosov (Russia), and to Leggett (Great Britain) for studying superconductors of type II. Superconductivity found numerous applications in science and engineering, one of the most important being the construction of accelerators of the new generation (colliders)

In the 1940s, physicists who worked on ring-shaped accelerators (where the electrons are accelerated to relativistic velocities), discovered that a significant fraction of energy is spent on synchrotron radiation. Applications of this radiation, however, were found only two decades later. As compared with x-ray devices, synchrotron generators ensured a narrower monochromatic beam with an extremely high brightness (energy density). Thus, synchrotron radiation turned out to be a very useful tool for studying the internal structure of matter.

It is a surprising coincidence, but it was superconductivity that was used two more decades later for multiple amplification of power of the synchrotron radiation generator. In 1979, a superconducting “snake” was fabricated at BINP SB RAS and mounted on the VEPP- 3 electron storage ring. This “snake” was the first source of synchrotron radiation in the world, where a necessary structure of the magnetic field was maintained by a chain of short superconducting magnets. It consisted of a mere 20 pairs of magnets, but the brightness of the photon beam generated by this “snake” was almost 200 times greater than that of radiation generated by conventional bending magnets. 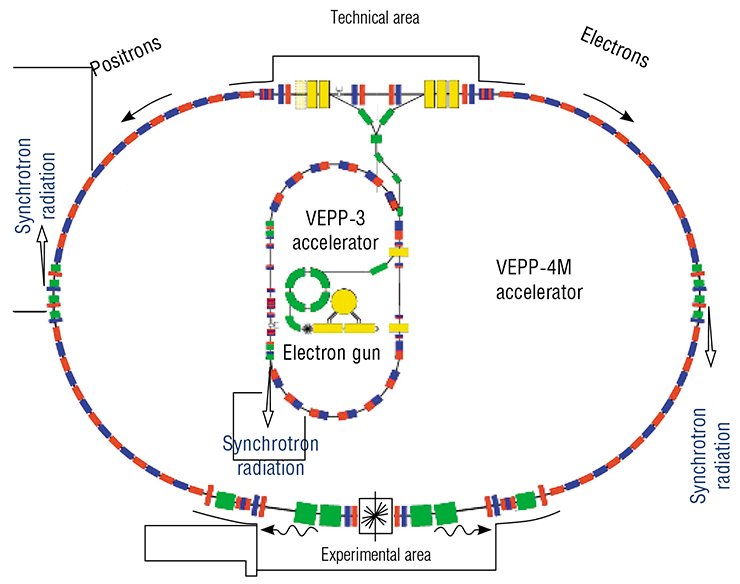 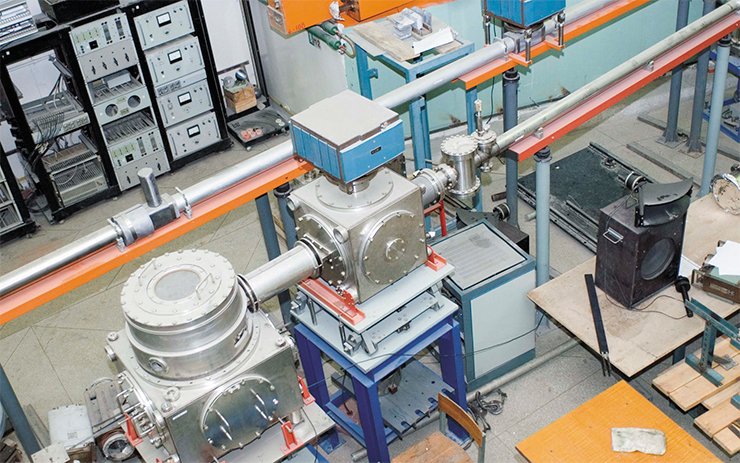 In the last 15 years, BINP SB RAS has fabricated and delivered more than a dozen superconducting wigglers (generators of synchrotron radiation with a continuous spectrum) to its customers in the USA, Great Britain, Canada, Germany, Italy, Brazil, Spain, and other countries. These devices differ in their technical performance, because the radiation spectra were optimized for particular tasks.

A wiggler and an undulator are specialized sources of synchrotron radiation. The Russian language uses one term for both devices – a “snake.”
An electron emits on the curved segment of the trajectory of its motion. The length of this segment depends (as an inverse proportion) only on the value of the magnetic induction of the field through which the charged particle flies.
If the curved segment length is smaller than the “snake” period, i. e., than the distance between the neighboring identical poles of the magnet, then the radiation spectrum is continuous. This is the situation ensured by the wiggler. Otherwise, a line spectrum is observed, as in the undulator

Thus, a superconducting 21-pole wiggler with the greatest value of magnetic induction (7.5 T) was constructed for the Center of Synchrotron Radiation at the Kurchatov Institute of Atomic Energy (Moscow), where it is used to solve material science problems associated with the structural analysis of various substances, including nanomaterials.

In October 2011, one more “child” of BINP SB RAS was launched at the ALBA CELLS synchrotron radiation center (Catalonia, Spain): a 119-pole wiggler with a period of 3 cm and magnetic field amplitude of 2.1 T. Today, this wiggler yields the greatest radiation density: the x-ray beam in the range of photon energies of 1—60 keV with a power of 20 kW is focused in an extremely narrow cone (smaller than 10–6 steradian). This facility occupies an intermediate position between the wiggler and the undulator: it has a line spectrum in the soft range (up to 6 keV) and a continuous spectrum at higher photon energies.

This extremely bright beam makes it possible to obtain images by using x-ray transmission microscopy and microtomography, which is important for nanoscale diagnostics and studying the volume structure of various samples. The method of “powder” diffractometry is now used to study the structure of nanomaterials with a high spatial resolution. As the measurements can be performed within less than 1ns, the dynamics of fast processes can be investigated. 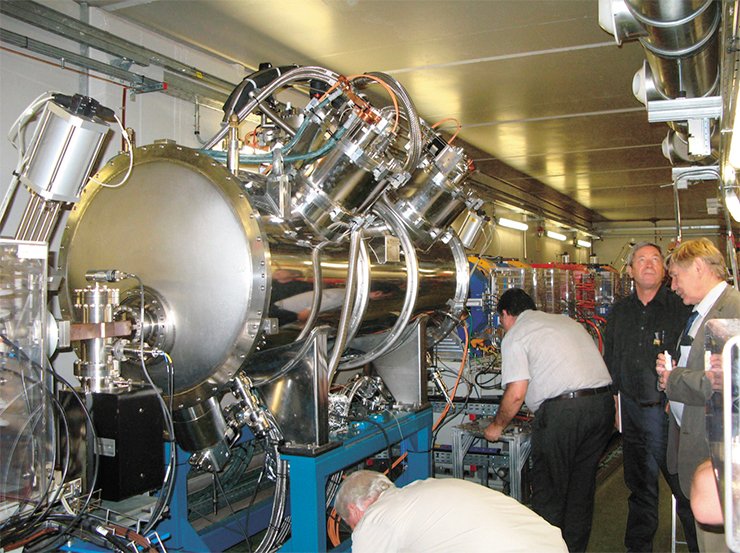 Several superconducting multipole wigglers with the magnetic field intensity of 4.2 T that were fabricated at BINP SB RAS are installed at the international centers of synchrotron radiation; they are designed for biomedical research such as a three-dimensional qualitative analysis of the content of minerals in the bone tissue, mechanical behavior of bones under loading, etc.

Bright x-ray beams are also of great interest for material science and engineering, because they allow of studying specific features of the volume structure of multiphase composite materials, including cracks and pores. In chemical engineering, it is possible to study the flows of immiscible fluids. For these purposes, next year multipole superconducting wigglers will be delivered to the research centers of Russia, Australia, USA, and Germany.