Nature has created a variety of biological nanodevices and nanomachines; we can reprogram elements of these machines to solve the challenges of modern biology and medicine. Biopharmaceutics is a field where virosomes find numerous applications. Molecules of proteins, DNA, RNA and their complexes are successfully used to construct therapeutic drugs and vaccines. This is the foundation of the medicine of the future, which will be based on smart drugs that selectively target infections agents or biopolymers that define the functioning of human cells

Viruses, being the most important and studies class of biological nano-objects have been used fairly extensively in applied medicine and various basic scientific research. By modifying viral genomes, scientists develop infectious agents that selectively target cancer cells; “weakened” viral particles are used as live vaccines; bacteriophages (bacteria-killing viruses) are used in agriculture, medicine and food industry as anti-infection agents. Viral genetic material has been used as the basis for biotechnological systems for bulk production of proteins in bacteria and cell cultures. Elements of viral structures are extensively applied in the development and production of analytic devices, materials for electronics and therapeutic tools.

The wide range of applications of viruses is explained by their unique structure and life cycle: they are completely inert outside the host’s body and do not have a cellular structure. Their genomes are very variable in size and structure: viruses can contain one or several RNA or DNA strands, which can be linear, circular, or segmented.

The role of the cell nucleus protecting the viral genome is played by the capsid, which is made of structural proteins and enzymes. More complex viral particles can have additional envelopes, called supercapsids. These lipoprotein structures contain glycoproteins — proteins that interact with surface receptors of the cell, allowing the virus to enter the cell. A virus can have more than one type of glycoproteins. For instance, the flu virus has two: hemagglutinins and neuraminidase.

Selective entry of viruses into cells plays an important role in their survival. A viral particle attaches only the “right” cell, which can guarantee its reproduction. The entry of viruses into the cells can follow different scenarios. For instance the human immunodeficiency virus (HIV‑1) infects the cell by merging its envelope with the plasmatic membrane of the cell and directly enters the cytoplasm. The flu virus uses an alternative method, called endocytosis — a natural process that the cell uses to uptake matter from the environment.

Virosomes can be used as containers to deliver drugs into cells. Quite often, the therapeutic potential of drugs demonstrated in vitro cannot be used to the fullest in the body because of difficulties in their delivery into cells or premature degradation in the bloodstream. To overcome this problem, scientists tried using liposomes — artificial lipid bubbles, however, there are no known ways to produce stable liposomes that would interact only with specific types of cells.

This sparked the idea of solving this problem with virosomes — viral particles that are devoid of genetic material but have the necessary surface glycoproteins. Such particles have an important property: they retain the ability to selectively bind to specific cells, delivering their contents into these cells.

The feasibility of virosome-mediated drugs delivery was proven by successfully suppressing the synthesis of hepatitis C virus proteins in animal models. Virosomes made of the Sendai virus were filled with short hairpin RNA capable of inhibiting the production of the hepatitis C virus protein in infected cells. As the result of intravenous injection of the drug, the levels of the viral protein in liver cells of infected mice were efficiently reduced (Subramanian et. al., 2009).

In some cases, virosomes must be “reprogrammed” in order to aim them at specific types of cell. This is especially relevant with virosomes designed to deliver drugs provoking cell death. In this case, mistakes are unacceptable.

Glycoproteins of the flu virus can be inhibited using polyethylene glycol; after that, proteins are added that selectively bind only to specific types of cancer cells. In this case, virosomes will deliver their contents only to these target cells. An example of successful modification of virosome specificity is the reprogramming of flu virus-based virosomes to efficiently merge with ovarian carcinoma cells (Mastrobattista et al., 2001).

Virosomes that carry antigens (structural components of pathogenic microorganisms that trigger the immune response in the body) inside or on the surface can be used as vaccines and facilitate the production of immunological memory of T and B lymphocytes by the recipient. Unlike live caccines, when the recipient is injected with weakened viral particles with inactivated genetic material, virosomal vaccination is free of the risk of accidental infection.

Virosomes can be used not only to prevent, but also to treat such diseases as hepatitis C. Cytotoxic CD 8+ T lymphocytes are thought to play the main role in fighting this infection: these cells are professional killers of intracellular parasites, which are unreachable to the humoral, or antibody-mediated immunity. When CD 8+ T lymphocytes spot the antigen on the membrane of antigen-presenting cells, they interact with it through their receptors, after which they mature and destroy the infected cells. To activate the T-cell immune response, the antigen must get into the antigen-presenting cells; virosomes can be the carriers of the antigen (Zubrrigen & Gluck, 1999).

Virosomes can be used as vaccines not only against viruses, but against other pathogens as well. Mice develop antibodies against the malaria pathogen after being injected with flu virus-based virosomes carrying synthetic peptides corresponding to plasmodium proteins on their surface (Okitsu et al., 2008). There are efficient vaccine products based on diphtheria and tetanus toxins. Comparison of action of these drugs and anatoxins (toxins that cause immune response but do not have marked toxic properties and are traditionally used as vaccines against diphtheria and tetanus) has shown that in the first case, antibodies are developed more vigorously (Zubrrigen & Gluck, 1999). 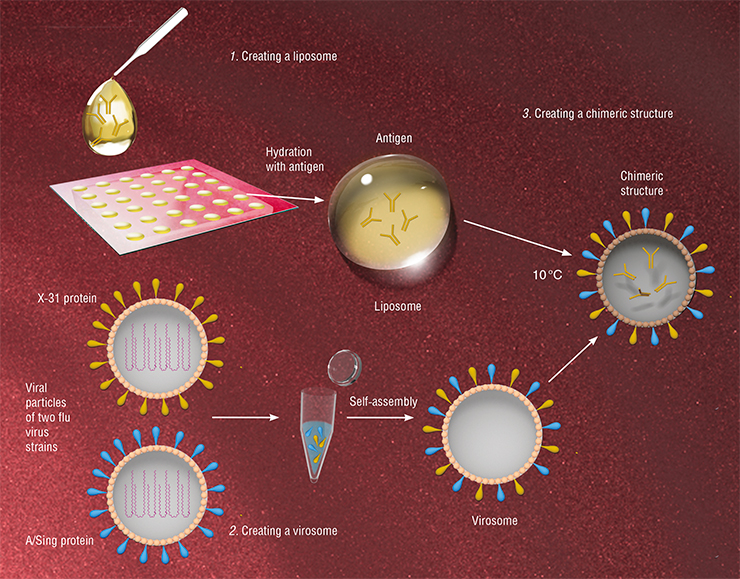 Virosomes can be used for immunotherapy of oncologic diseases — to deliver cancer-associated antigens directly to cells as plasmid DNA or short peptides. Such virosomes can actually activate cells of the immune system more efficiently than the native form of the same antigen. Experiments on animals have shown that an antigen specific for Melan-A type melanoma cells, delivered in flu virus-based virosomes, successfully enters plasmatic dendrite cells of the immune system (a population of antigen-presenting blood cells). In this case, T-cells capable of destroying cancer cells are activated more efficiently than when free peptide is injected. This is probably because the antigen in virosomes is well-protected. (Angel et al., 2007).

There are substantial advantages to using virosomes in the therapy of human and animal diseases, the main being their non-toxicity and compatibility with the majority of synthetic drugs. Moreover, the lipid shell securely protects the material contained in liposomes from premature degradation. Virosome-mediated therapy is already showing extremely promising results. Some virosome based drugs, — predominantly vaccines — are currently at different stages of pre-clinical and clinical trials. They include intranasal vaccines against the flu virus, respiratory syncytial virus, and HIV.

An example of commercially available virosome vaccines is Inflexal, a Swiss-made vaccine that is essentially virosomes packed with antigens against type A and B flu virus. In the past decade, Switzerland has been leading by the amount of funds invested into virosome-based drug research and development.

An example of a virosome vaccine against the flu virus manufactured in Russia is “Grifor”, produced by Microgen (Moscow) and officially approved for medical use in the Russian Federation in 2008. “Ultrix” is another Russian-made next-generation flu vaccine, also effective against the swine flu (Shamsheva et al., 2014).

There are currently several groups worldwide involved in the research of delivery of therapeutic nucleic acids, including small interfering RNA (siRNA) to mammalian cells using virosomes (de Jonge et al., 2006). The main complications encountered in the development of such virosome-based drugs are connected with the efficiency of the drug uptake into the virosome and with targeted delivery to specific types of cells. Today, scientists at the Institute of Chemical Biology and Fundamental Medicine SB RAS (Novosibirsk) are working on creating virosomes with standardized quality and stable properties, including the capability of targeted delivery of therapeutic nucleic acids. There are methods of including these molecules into the viral envelope (Vlasov et al., 1988, 1989). Eventually, researchers hope to create virosome-based drugs containing therapeutic nucleic acids and evaluate their effect on different types of human cancer cells.