A Nanoversion of Dr. Doolittle. Bacteriophages as an Alternative to Antibiotics in Veterinary

Infectious diseases of farm animals head the list of illnesses causing a significant economic loss due to the mortality and decreased productivity of the animals and because of considerable expenditures on the prevention and control measures. Of special importance are infections that also affect humans; these are anthrax, rabies, brucellosis, leptospirosis, and salmonellosis

One of the key and intensively developing branches of agriculture in many countries is poultry farming, giving about 300 million tons of meat annually, which is obtained from over 500 billion broilers. However, approximately 5 % of the birds, i. e. every second over 800 chickens, die of various diseases. Pathogenic bacteria, including those infecting humans, are among the major causes of avian mortality. The most widespread pathogens in this country are Listeria, Yersinia, Salmonella, Campylobacter, and some Escherichia coli strains.

In the last decade, the Salmonella and E. coli strains resistant to a wide range of antibiotics have been detected in increasing frequency. The resistance of these microorganisms is often determined by the efflux, an active pumping-out of toxins from the bacterial cell implemented by transport (pump) systems of protein nature (Hernando-Amado et al., 2016). The efflux of substances is triggered with the help of an intricate regulatory system that responds to various impacts, such as oxidative stress or exposure to some cation disinfectants used by poultry breeding facilities instead of antibiotics. Owing to the efflux, the bacteria become resistant to gentamicin, chloramphenicol, florfenicol, and other antibiotics, thus preventing their binding to the targets inside the cell

Note that sooner or later every animal farm encounters the problem of infectious diseases, regardless of whether it breeds cattle, sheep, goats, pigs, or fur animals. Health support and safety of the products require combatting pathogenic microorganisms. Since the discovery of penicillin in 1928, antibiotics have been a major tool of controlling bacterial infections. However, despite constant development of new drugs, the emergence of multiresistant bacterial strains displaying resistance to almost all available antibiotics has become a serious problem not only in public health care, but also in veterinary medicine. 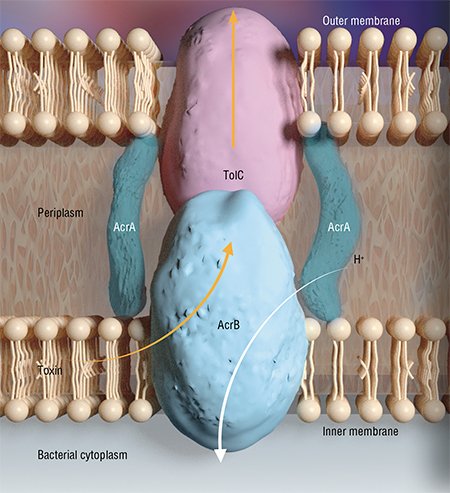 The use of antibiotics in animal and poultry breeding is often criticized because, on the one hand, the drugs can be retained in the foodstuff and, on the other hand, they can induce the emergence of new drug-resistant pathogens. In addition, the use of antibiotics in agriculture is not always justified and is sometimes harmful. In particular, antibiotic therapy in the case of swine diseases is frequently a two-edged sword. For example, the bacteria causing clostridiosis, while defending themselves from the antibiotic, sometimes produce spores and synthesize toxins, thereby causing a toxic infection and injuring the intestinal mucosa. Another example is the reproductive and respiratory syndrome: antibiotics frequently aggravate the course of this viral infection inducing lung inflammation.

However, limited administration of antibiotics to animals could cause an increase in human infection by the corresponding pathogenic bacteria, resulting in turn in the increased use of antibiotics in the human population. In addition, today we know that there are mechanisms that can induce antibiotic resistance in bacteria even if they are not in contact with these drugs.

This challenge stirs up interest in searching for new therapeutic tools that will be able to replace or supplement antibiotics in controlling infectious diseases. The search for alternative means to treat bacterial infections immediately highlighted phage therapy and phage prophylaxis (Akimkin et al., 2010).

From a laboratory to a poultry plant

W. Smith and his colleagues from the Institute for Animal Disease Research (Great Britain) may be regarded as pioneers in using phages to treat animals (Smith et al., 1987). They studied the laboratory mice experimentally infected with E. coli and found that even a single administration of the bacteriophage preparation significantly reduced the number of viable bacterial cells in the gastrointestinal tract. Later they did the same experiments on the calves, lambs, and guinea pigs infected with a virulent E. coli strain that caused diarrhea. Phage therapy reduced the bacterial counts in the gastrointestinal tract as well as alleviated the symptoms associated with this infection, such as dehydration. As a result, almost all infected animals survived. 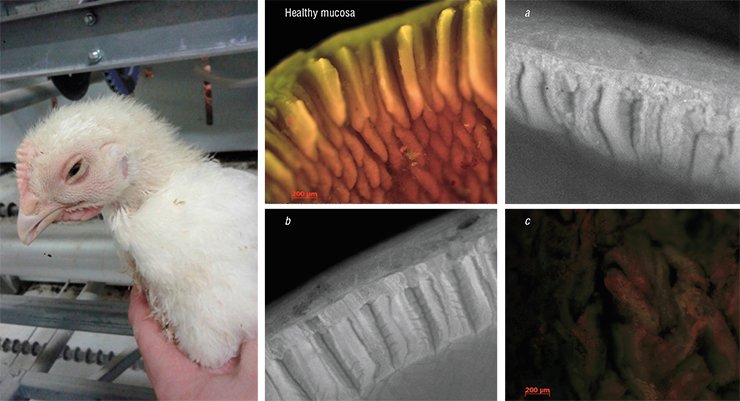 The administration of bacteriophage preparations in large agricultural facilities has its own specific features favoring this kind of therapy. Biological safety systems in large agricultural facilities efficiently limit the diversity of infections; correspondingly, the number of pathogenic microbial species is considerably smaller than in the human population. That is why the infections present in such plants are highly reproducible, so the diagnosis made at one poultry house can be extrapolated to other houses. However, it should be kept in mind that bacteria can defend themselves against phages. For example, the experiments on bacterial monocultures have shown that administering therapeutic phages leads to the emergence of phage –resistant bacterial cells; this takes only a few hours. In addition, while antibiotics have a relatively wide range of action, there is no superbacteriophage that can attack a large number of different microbial species and strains. Thus, it is more practical to use complex bacteriophage cocktails.

Today, it is already technically and economically feasible to search for the necessary bacteriophages for an individual farm and to produce the corresponding biological preparations. This does not exterminate the overall range of pathogenic bacteria but makes it possible to select and use efficient bacteriophages against the bacteria most dangerous from a sanitary or epidemic standpoint.

Bacteriophage preparations against salmonellas and E. coli have been successfully used in large poultry plants. For example, an abnormally high salmonella infection rate (50—70 %) of broiler chickens at a poultry plant was decreased to an unrecordable level over several months. Besides, the administration of bacteriophages, vaccine virus strains, and useful probiotic bacteria in large poultry and pig plants is organized after an epidemic pattern, which considerably reduces the cost of infection control and increases its efficiency.

In the above example with salmonellas, the bacterial serotype changed in the course of phage therapy, bringing about a new strain, Infantis, resistant to the bacteriophage that was used. This suggests that bacteriophages may act as a factor of interspecific competition for bacteria. The fact is that the concentration of Salmonella bacteria in the intestines is relatively low, which could suggest that there is no competition between different species and subspecies of this genus (Antunes et al., 2016). However, the succession of different salmonella serotypes in chicken populations indicates the nonrandom character of this phenomenon.

FOR CREATURES GREAT AND SMALL Our pets, such as cats and dogs, are also affected by bacterial infections. They come into close contact with people, thus becoming a more dangerous source of infections, such as leptospirosis, which affects the kidneys and liver, or intestinal yersiniosis, accompanied in humans by chronic abdominal pain and diarrhea, which can sometimes even lead to death. Highly pathogenic variants of E. coli, salmonella, Campylobacter, and Clostridium can also enter the human body from cats and dogs, causing intestinal infections, bacterial sepsis, and hemolytic-uremic syndrome. In this case bacteriophage therapy for animals would also be a good prevention measure for their owners who would not run the risk of being infected with antibiotic-resistant bacteria from the pets. 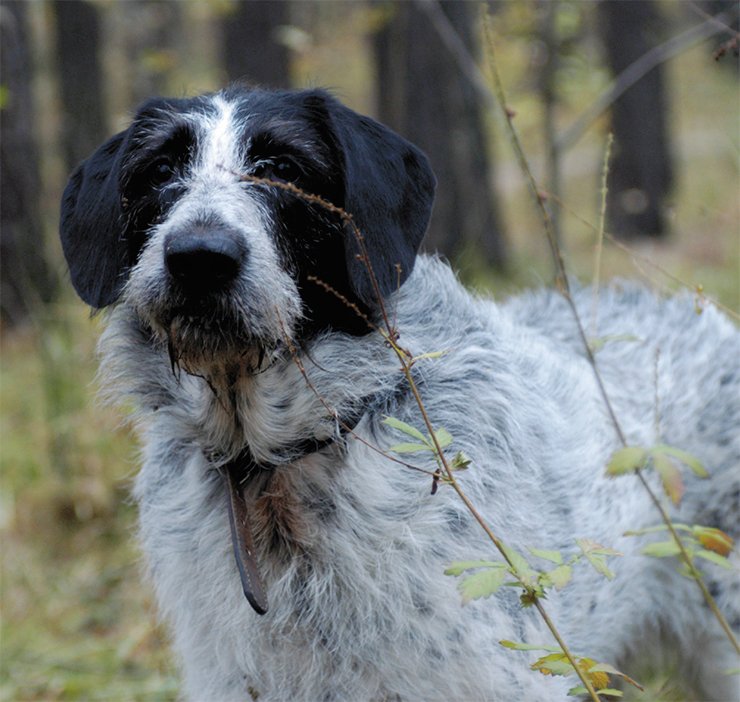 Unfortunately, the veterinary toolkit still lacks bacteriophage preparations against such severe diseases as leptospirosis and yersiniosis, although research work aimed at designing polyvalent anti-yersiniosis bacteriophages is in progress. The web search, including the forums of pet owners, demonstrates that the list of drugs for animal treatment contains some “human” phage preparations, such as staphylococcus and streptococcus bacteriophages, used for the prevention of purulent skin and mucosal infections as well as of other infections caused by these bacteria, and complex pyobacteriophage (pyopolyphage), which displays a wide range of antibacterial activities and is used for treating several purulent and inflammatory diseases. The specific therapy of puppies and kittens infected with pathogenic E. coli strains, which frequently cause a lethal outcome, requires the use of the bacteriophage against paratyphoid fever and colibacteriosis


Thus, at present the salmonella serotypes Gallinarum and Pullorum almost do not occur in the intestines as distinct from the serotype Enteritidis, which, in turn, occurs much less frequently than the new serotype Infantis. Interestingly, it was during the increase in the rate of chicken infection with the Infantis salmonellas that the research team from the Institute of Chemical Biology and Fundamental Medicine (Siberian Branch, Russian Academy of Sciences) and from the State Research Center of Virology and Biotechnology Vector (Novosibirsk, Russia) isolated a large amount of bacteriophages active against the Enteritidis serotype. However, the bacteriophages against the Infantis serotype were rather few. In fact, there may be several explanations for this; the idea that bacteriophages are involved in displacing closely related bacterial groups looks very probable.

The relevant research literature widely covers the phenomenon of polyhostality (the ability to infect a wide range of bacterial species) of bacteriophages and the phenomenon of different phage resistance of individual bacterial strains within the same species towards the same bacteriophage. Evidently, the bacterial strain that can maintain the existence of a bacteriophage without killing the host cell will be able to acquire an evolutionary advantage because it will cause death to the competing bacteria sensitive to the bacteriophage. This example shows how many different biological ideas can appear when interactions between bacteria and bacteriophages are observed. In addition, by studying the spontaneous application of bacteriophages in poultry and pig plants it is possible to quite safely simulate epidemics. 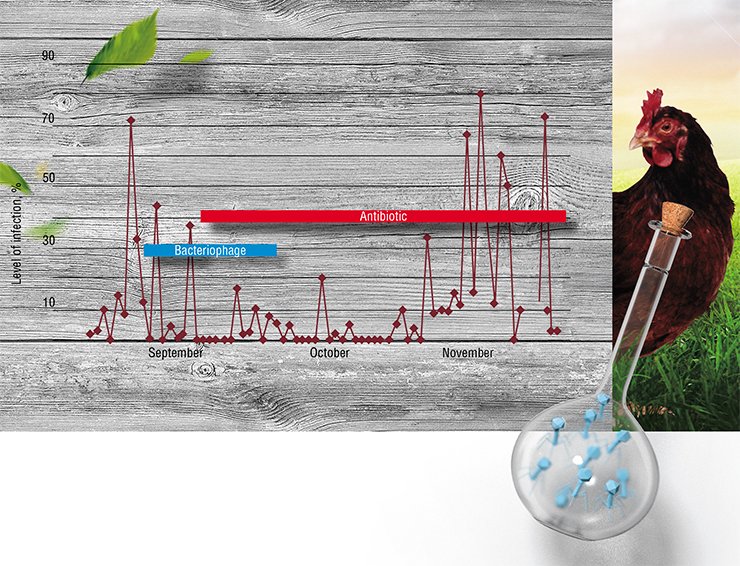 The use of bacteriophages is much more promising in veterinary medicine than in human medicine. It takes a shorter time for new veterinary drugs to enter the market as compared with human drugs. In addition, the diversity of infections at a large animal breeding farm is considerably ower as compared with the infections diagnosed in humans, which simplifies the identification of bacteria and selection of the corresponding bacteriophages.