In 2011, the international Rusnanoprize award wwas given to Academician G. V. Sakovich, Scientific Supervisor of the Institute for Problems of Chemical and Energy Technologies of the Siberian Branch of the Russian Acawwdemy of Sciences (the city of Biysk). The prize was awarded for developing a technology for producing nanoscale diamonds from explosive substances through their detonation. Though developed almost 30 years ago, the technology still has no analogues in the world. For its application in industry, the Federal Research and Production Centre Altai (Biysk) (General Director – A. S. Zharkov, Corresponding Member of RAS) was awarded a commemorative Rusnanoprize diploma

Diamond is a form of carbon which is metastable under normal conditions, and can only be formed under very high pressures. The required level of pressure can be created, for instance, in a shockwave that follows the detonation of explosive substances, which was proved in leading world laboratories. 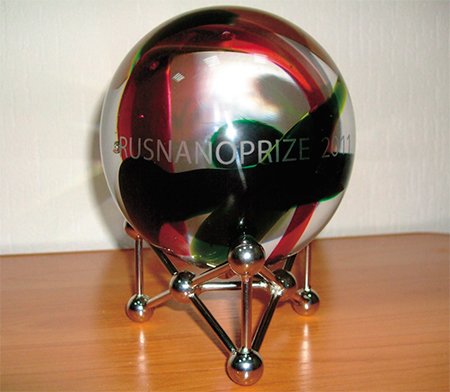 Based on this method, the industrial production of diamonds was begun by the American Company DuPont in the early 1980s. Their technology was that, through exploding a charge of explosive substances, an ampoule with some carbon material, usually with graphite, was subjected to a shock compression with pressures exceeding 100,000 atm., followed by heating up to several thousand degrees. Under such conditions, carbon re-crystallized into diamond. So, the essence of the approach was that the energy of explosion was used to create conditions required for graphite-to-diamond phase transition. In order to prevent the reverse transformation of diamond into carbon during the pressure decline, a 20- fold excess of copper or nickel powder was added into the ampoules so as to provide quick heat removal. The resulting product contained micron-sized diamond particles and was used for technical purposes, for example, as an effective abrasive material for rough grinding of mechanical parts.

The Altai FRand PC (Biysk) became interested in synthetic diamonds, too. The movers of the idea of creating diamond production in Russia were G. V. Sakovich, Vice General Director of the Company, and A. M. Staver, Head of Department at the Institute of Hydrodynamics of the Siberian Branch of the USSR Academy of Science. They developed a program for research in this field.

Detonation velocity was known to be a key factor in percussive synthesis of diamonds. If it was too high, the ampoule was destroyed; if it was too small, thwe energy was not enough for diamonds to form. However, the chemical composition of the explosive material used by DuPont was a military secret, so the research had to be started from scratch.

Altai’s first attempt to reproduce the American technology failed – the ampoule literally turned to powder during the explosion. With another composition of the explosive material, the ampoule was also destroyed but to larger pieces; when X-rayed, its content was found to contain the crystalline structure of diamond.

The aim was achieved; the next task was to simplify the technological process. For this purpose, the researchers considered the method for detonation synthesis of diamonds described by Professor A.N. Dremin (Institute for Problems of Chemical Physics of RAS, the town of Chernogolovka). According to this method, graphite powder is directly mixed with the explosive material (hexogen); metal additives are not required here since the generated diamond phase is cooled at the expense of expansion of the explosion products in the confined volume of the explosion chamber.

However, the detonation velocity was so high (over 6 km/s) that the impact of the shock wave only lasted a few microseconds; for this reason, the generated diamonds were too small, of a size comparable with that of the initial carbon particles. Besides, it was a problem to separate diamond from graphite as both substances are heat-resistant and chemically inert materials. Necessary investigations having been conducted, chemical treatment conditions were found under which graphite transferred into a soluble oxygenized form, and refined diamond precipitated.

The very first experiments carried out in Novosibirsk showed that the total mass of diamonds isolated from the explosion products exceeded the mass of the initial graphite. Yet, no breach of the mass conservation law occurred: the process of transformation involved not only the carbon of graphite but also that of the explosive material (in a molecule of hexogen, over 15 % wt. falls at carbon). So, for the first time in the world production of diamond immediately from explosive materials was carried out at a pilot installation in Biysk.

Many researchers were skeptical about the prospects of applying «diamond nanopowder»; still, as the research plan had already been accepted by the Ministry, the Company started research into the properties of these artificial nanodiamonds (at that time, they were called ultra-dispersed diamonds) with a view to finding a promising application field for them. Contrary to skeptical expectations, such application fields proved to be incredibly multiple.

First of all, since diamond is the hardest known substance, it was most natural to try and use it in creating abrasive materials. So, polishing pastes were made based on this «diamond powder». The more fine-dispersed the paste is, the cleaner the polished surface becomes. While roughness of 3—4 µm is appropriate for lenses and mirrors used in an optical microscope, an X-ray microscope where much smaller wave lengths are involved, requires especially smooth surfaces; they can be produced only by using diamond pastes. So, it was not without reason that Japanese manufacturers of sapphire optics microelectronics, which require the highest degree of purity, became customers of the Biysk diamond-makers. 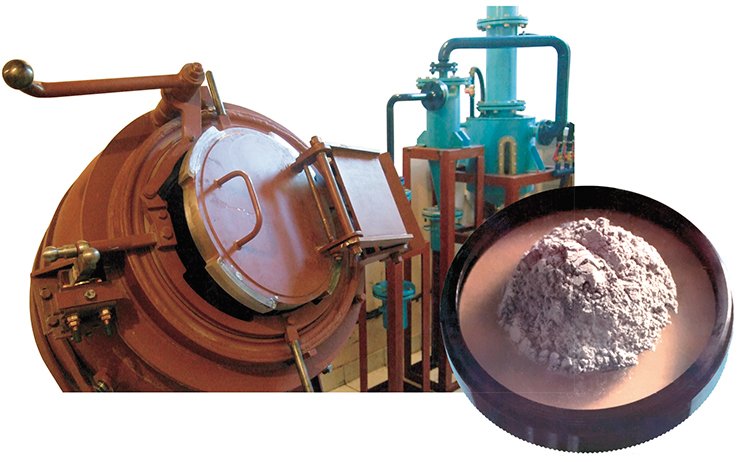 Another field of ultra-dispersed diamond application is galvanic coatings. Thus, adding diamond to nickel coating makes it as hard as chrome coating, which makes it possible to do without the environmentally harmful chromium-based galvanic production. In jewelry, the gold layer thickness needed for gilding is as small as 5—8 µm, but when the surface area is thousands of square meters, metal consumption becomes considerable. Adding diamond powder allows using half as thin gilding layers, while also raising their wear-resistance by 2—4 times, which, in the end, saves the expensive gilding material.

One more useful feature of diamond powder is that when added to motor oils, it considerably decreases friction between the rubbing surfaces. The reason for this unexpected effect is that: oil molecules are adsorbed on the surfaces of diamond nanoparticles, and the generated nano-sized composite globules fill micron-sized cavities of the rough surface, forming a smooth and slippery layer on it. This layer proves to be very durable: under loading the oil is not pressed out but is steadily held on the diamonds. In Japan, this effect aroused such a keen interest that an “anti-friction program” was started aimed at no less than “a revolution in economics of mechanical engineering”, or creating “fourth-generation machines.” Sure enough, when all the rubbing surfaces have a submicron level of roughness, the machine runs silently and therefore almost without energy losses. 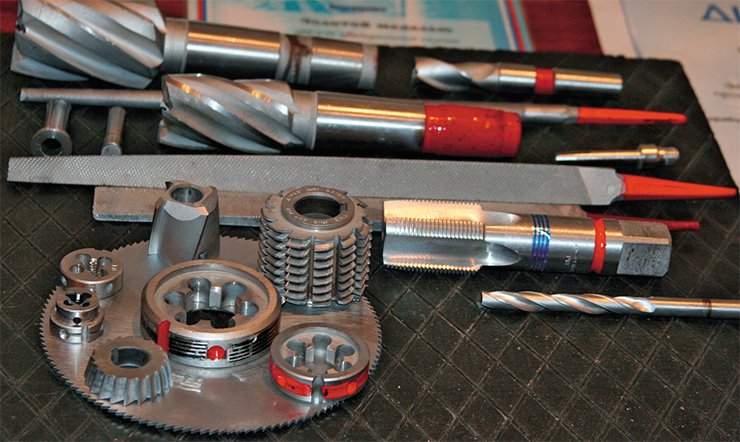 Nanodiamonds can also increase the service life of cutting and stamping tools, motor tires and other industrial rubber products. The explosion technology developed in Biysk can be used to produce not only diamonds but also a large group of other materials with metastable crystal structures which can only come into being under extreme conditions – super-high pressures. No other method can produce such unique substances. They include a wide range of nanomaterials from metals, oxides, nitrides, carbides.

In 1989, Russian Prime Minister N. I. Ryzhkov visited Biysk and saw the achievements of Altai. FR and PC. Three months later, he issued a decree that a nanodiamond industry be created by 1995, with an output of 50 tons per year (which is almost 250 million carats – more than was mined in Yakutia annually at that time). In spite of the lack of state financial support during the difficult post-perestroika years, the work never ceased. In recent years, since nanotechnologies have been acknowledged as a key trend in the development of civilization, the results of Biysk researchers have generated another wave of interest – from Rusnano (a state-owned company aimed at developing nanotechnologies).

During the 30 years devoted to the study of materials produced through detonation synthesis, the members of Altai FR and PC have received over 50 author’s certificates of the USSR, patents diven by Russia, Belarus, Canada, USA, Japan, and EU countries. Cooperation between the two structures, the Academy of Sciences represented by the Institute for Problems of Chemical and Energetic Technologies, and industry represented by Altai FR and PC, continues. At present, not only does the company improve the technologies in the well-known areas of nanopowder application but also carries out an active search for radically new applications such as polymer and biopharmaceutical materials, purification technologies, etc.

Though Rusnanoprize was awarded only three times, it has already gained world-wide recognition. The fact that this prestigious award was given to a Biysk researcher both proves the status of Biysk as a science city and is a sign of unequivocal success of Siberian science.

Academician G. V. Sakovich, Scientific Supervisor
of the Institute for Problems of Chemical and Energetic
Technologies of the Siberian Branch of RAS (Biysk)

The photos used in the publication are courtesy of E. S. Akhmadeeva

Institute for Problems of Chemical and Energy Technologies, SB RAS