A Seedbank in the Permafrost

A resolution has been adopted to create in Yakutsk the first stage of the Federal Seed Cryorepository for Cultivated, Rare, and Endangered Plant Species; it will be located in the layer of permafrost. This decision is grounded on the results of a long-term experiment started by Yakut researchers in 1977—1978, on the storage of plant seeds in an underground permafrost laboratory

Both the species and genetic diversities of the flora and fauna of our planet are currently in jeopardy: the global climate change as well as human impacts, such as technogenic catastrophes, can cause an unexpected and irretrievable damage. According to expert predictions, almost a quarter of land plant species, including those of potential economic interest, can practically disappear by the mid-21st century.

There are several methods providing for a long-term preservation of plant genetic resources. Seeds, containing a unique set of genes, are the plant part most appropriate for storage. Therefore, first and foremost, we speak about seedbanks, where the specimens are stored for decades. This method has significant advantages over the other approaches due to its simplicity and low labor input. Creating such a “genetic stock,” especially for the genes significant in breeding, is the most rational way to preserve biodiversity for practical purposes.

Today many countries put a lot of effort into preserving the seeds of rare and agriculturally important species of cultivated and wild-growing flora: the total number of seedbanks approaches a thousand and a half. Such repositories house hundreds of thousands of seed specimens. In particular, the seedbanks of France comprise about 500,000 specimens; of China, over 800,000; of India, over 600,000; of the United States, about 1 million, and of Brazil, over 300,000. In Russia, the principal repository is the St. Petersburg Vavilov All-Russia Institute of Plant Industry; however, the number of specimens in its collections was almost halved over the last 35 years, amounting now to 270,000. 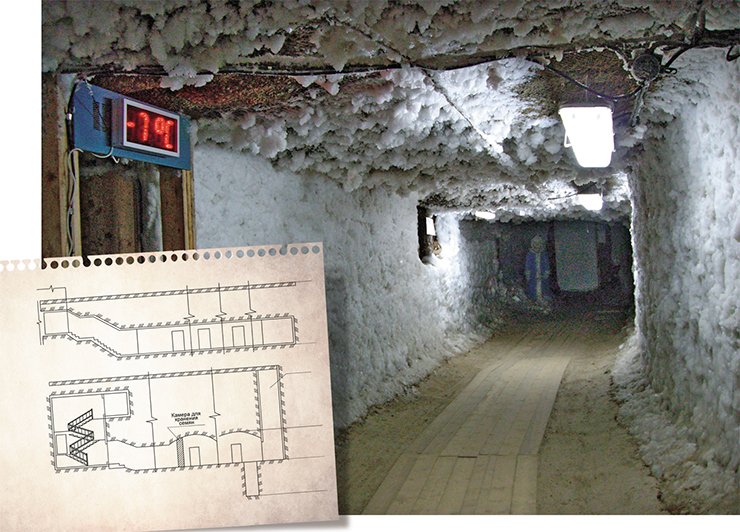 The International Council for Plant Genetic Resources has elaborated general standards for storing seed specimens; the standards are to be followed by all countries of the world. According to these regulations, a seedbank consists of a core collection and a working (operational) collection, the specimens of the latter being tested on a regular basis. The collections should be stored under conditions guaranteeing that the viability (germination capacity) of the seeds amounts to at least 65 % over 10—20 years of storage. For this purpose, the first seeds are dried to 3—7 % humidity and then stored at negative temperatures in an air-tight package.

The preferable storage conditions for a core collection are –180 ºC and a relative humidity of 5 %; however, the combination of temperature and humidity may vary, depending on the plant species. Interestingly, the dependence of maximally possible shelf-life on storage temperature is nonlinear; correspondingly, the economic benefit from a decrease in temperature (at least in the temperature range to –200 ºC) becomes less with decreasing storage temperature.

Storing seeds at low temperatures and under conditions of low humidity helps to retain their viability for decades or even centuries. The seed germination rate is tested at certain intervals (usually, every five years) using the specimens of the working collection. Once the germination rate decreases, a new specimen is produced by growing plants out of the preserved seeds; however, this way of regenerating the collection is long and expensive.

The state-of-the-art repositories of plant genetic resources, intended to provide optimal conditions for long-term seed viability retention, are actually large refrigerators. Their maintenance is rather expensive because of considerable energy costs and regular seed replanting. For example, the annual cost of storing about one million specimens in the repositories of the US National Plant Germplasm System (15,000 specimens, in liquid nitrogen; the remaining ones at –18 ºC) is about 100 million dollars. In addition, a relatively low seismic stability of this facility can lead to a complete or partial loss of this collection in case of natural hazards. Sadly, Japan lost almost half seedbank collection because of the energy supply failure caused by the catastrophic tsunami that battered its coast in the spring of 2011.

Luckily, there is such an alternative as cryorepositories, located within the permafrost with stable temperatures not exceeding –4 ºС; they display considerable temperature inertia. Using the natural cold together with a system for optimizing the temperature, humidity, and gas conditions can provide for a superlong (decades and centuries) seed storage without any intermediate replanting. In such a way, it is possible to decrease the storage cost by a factor of hundreds, while the relative autonomy of the repository and its independence from any energy supply failures will protect the gene pool against global climate changes as well as against natural and technogenic catastrophes.

It is optimal to locate such cryorepositories in the north of the continuous and stable permafrost zone. Northern Yakutia and the main part of central Yakutia, where the depth of the permafrost can reach 1.5 km, meet these requirements. No wonder that the idea to found a cryorepository in this region was put forward by V. N. Dokhunaev (Yakutsk Institute of Biology, Siberian Branch, Russian Academy of Sciences; the present name is the Institute of Biological Problems of Cryolithozone), as early as the beginning of the 1970s.

Consequently, a joint experiment of the Yakut scientists on a long-term storage of over 10,000 legume seeds from the collection of the Vavilov Institute of Plant Industry was launched in 1977—1978 in the underground laboratory of the Institute of Permafrost, Siberian Branch, Russian Academy of Sciences (now named after P. I. Mel’nikov). Later, this repository was supplemented with approximately one thousand specimens of the cultivars introduced in Yakutia as well as with endangered and vanishing species of the local wild-growing plants. There have been no precedents in the world for such a long cryostorage utilizing exclusively the natural cold (Solomonov et al., 1984; Mokronosov et al., 1994).

The intermediate results of this experiment have demonstrated that the seeds of legume and cereal cultures, after 33 years of storage, retained a high germination capacity (90—100 %) and good morphological characteristics, while the rate of chromosome aberrations did not exceed 1—2 %. The studies have also shown that the rates of protein synthesis and intensity of cell division considerably decrease, while the activity of the antioxidant defense system as well as of the DNA repair system grows. This suggests that the processes in plant seeds stored in the natural cold, at temperatures about –6 ºC, fall within the physiological norm; moreover, at –18 ºC, the rate of chromosome aberrations increases three- to fourfold. The seeds that were stored in air-tight containers filled with carbon dioxide, argon, or nitrogen displayed the best characteristics.

Comparison of the results of this experiment with the preservation characteristics of analogous cultivar specimens in the collection of the Vavilov Institute demonstrates that the seeds stored under standard conditions (in refrigerator chambers) for 11—13 years display a decrease in germination capacity by 50—80 %, with 6—28 % rate of chromosome aberrations; moreover, the seeds became completely unviable after 28—30 years of storage.

In 2011, the reconstruction of abandoned mine no. 2, located within the precincts of the Institute of Permafrost, was begun, financed by the Republic of Sakha (Yakutia). In an underground working of such a type, rational use of the natural cold allows of implementing an efficient technology for controlling the temperature and humidity conditions, thereby maintaining the optimal temperature range and microbiological purity. This underground working can be easily extended later. 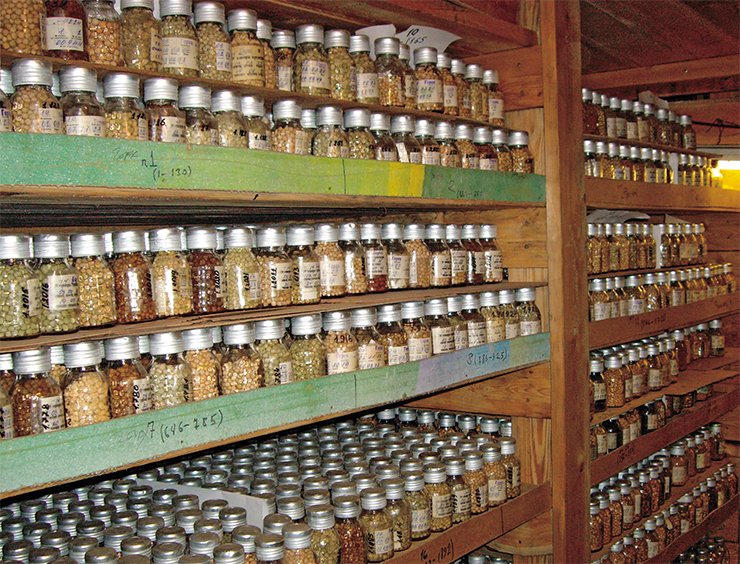 This mine will house the first stage of the Federal Cryorepository for Cultivated, Rare, and Endangered Plant Species, comprising over 100,000 cultivar specimens and will be further increased six–sevenfold. It is planned that the floor space of the future cryorepository will be 1,900 m2. The project must be implemented in the period 2013—2015; its estimated cost is 180 million rubles.

Recently, several developed countries, such as Norway, Sweden, and Japan, have shown a considerable interest in the idea of founding an international seed cryobank in the permafrost. Thus, in February 2008 the Svalbard Global Seed Vault with a maximal capacity of 4.5 million specimens started operating in Svalbard, Norway, on the island of Spitsbergen. This cryorepository in the body of a mountain, also referred to as the Doomsday Vault, is located in a seismically safe area at an altitude of 130 m above sea level, which provides its security even in case of polar ice melting. It is supposed to contain reserve duplicates of other world seed repositories; in March 2010 the vault housed about half a million specimens, and their number is constantly growing.

On the other hand, note that the temperatures of permafrost rocks in Spitsbergen never drop below –3 ºС; therefore, energy-demanding refrigeration equipment is required to reach the negative temperature recommended by international experts (–18 ºC). However, the results mentioned above suggest that the optimal temperature range for retaining seed viability and genetic integrity is from –6 ºC to –10 ºC.

Note in conclusion that our knowledge about seed storage is rather limited, since the main part of studies has involved agricultural plants. It is also necessary to comprehensively study the factors of optimal seed preparation for a long-term storage under natural cryogenic conditions and the effect of gas medium as well as to cope with the upscaling of the technology for seed storage in permafrost, which has been elaborated and optimized for laboratory conditions.