Previous
All news
Next
880

The Altai Princess Revealed Her Face

The story of life and death of the world famous Altai Princess of Ukok began about 2,500 years ago on a high plateau in the southern Altai Mountains and has been unfolding to this day. On April 6, 2022 the Anokhin National Museum of the Republic of Altai (Gorno-Altaysk, Russia) held a solemn ceremony dedicated to presenting a sculptural portrait of the noble horsewoman from Ukok. Her portrait, based on a 3D model of her skull, was created using the anthropological reconstruction methodology developed by Mikhail Gerasimov, a famous Russian anthropologist and sculptor. Nearly three decades have passed since the Pazyryk burial in the Altai Mountains was unearthed, and now the mysterious woman from the Ukok plateau has revealed her face

The first Pazyryk burials with mummified bodies were discovered in the mid-twentieth century during excavations in the eastern Altai Mountains. But only in 1993, after studying the Pazyryk culture for more than a century, archaeologists discovered on the Ukok plateau the first “frozen” Pazyryk burial with the mummy of a young noble woman. The discovery was made by an archaeological expedition of the Institute of Archeology and Ethnography SB RAS (Novosibirsk) under the leadership of Dr. Natalia Polosmak.

Of all the Pazyryk finds, the Ukok woman attracted the greatest attention not only among scholars but also the general public. No wonder – because of permafrost, the larch framework and the tightly sealed hollowed log containing the mummy were completely filled with ice. This “ice lens” had preserved not only the carefully embalmed body but also all the objects made of organic materials (including fabrics, felt, wood, and leather), which accompanied the deceased woman to her afterlife. 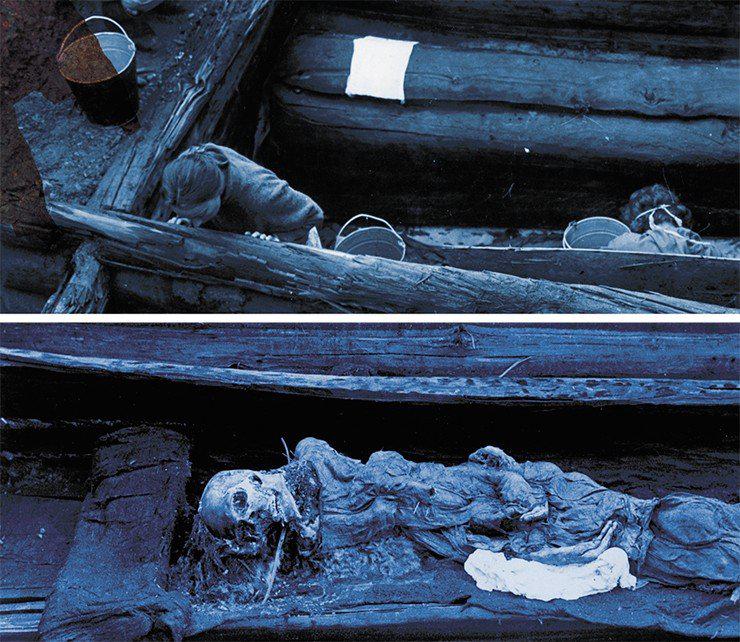 The young woman was buried dressed in a costume typical of common Pazyryk people: a shirt, a woolen skirt girded with a tasseled cord, and high stocking-like boots made of felt. However, her shirt was sewn from foreign wild silk; she was wearing a wooden torque necklace covered with gold foil and decorated with figures of winged leopards; she had tiny gold rings in her ears; and her high wig headdress was adorned with fourteen bird figures carved from cedar.

The special status of the buried woman manifested itself not only in these items of rare, foreign origin but also in the solitary mound itself, which stood in a prominent place in the river valley, and in the “accompanying” burial of a man and three riding horses, placed on the ceiling of the main burial. Her status also showed itself in the sophisticated mummification of her body – with the maximum number of operations, like in the mummified bodies buried in the royal mounds of Pazyryk. 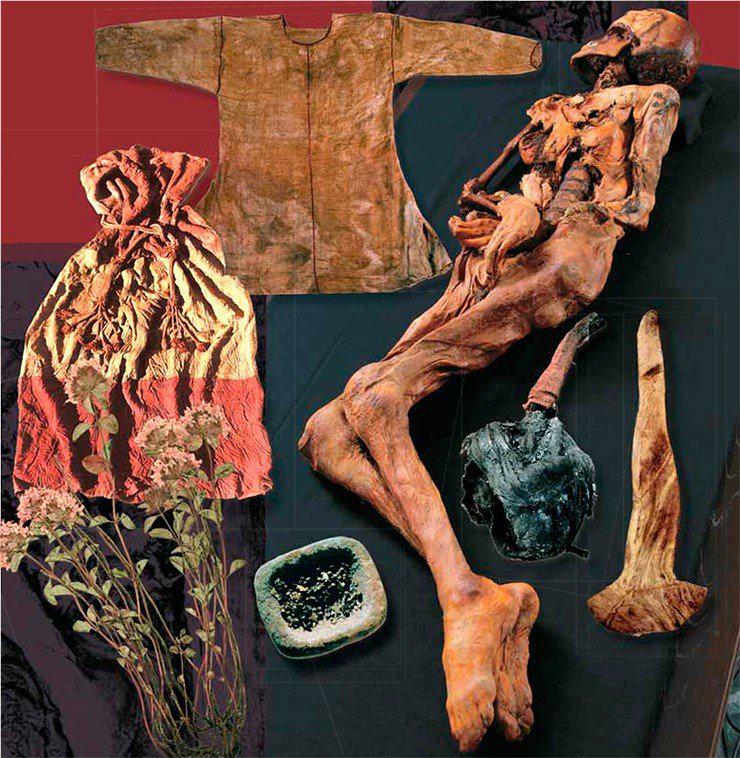 The tragic details of the life and death of the woman buried in this unusual burial were revealed during a tomographic study of her mummified remains, which was carried out two decades after the mummy was unearthed. Such a study became possible through a unique conservation technique developed by the Research and Educational Center for Biomedical Technology (Moscow), which was applied to preserve the mummy in the same form as she was found during the excavations.

The examination revealed signs of a severe pathology, which, obviously, had become the cause of her death. In her childhood or adolescence, the woman went through osteomyelitis, and later she was overtaken by another, fatal disease – breast cancer, which she suffered from in the last years of her life. Moreover, a serious injury (likely due to a fall from a horse) sustained shortly before her death aggravated her serious condition even further.

Why did people take so much care after a seriously ill member of their tribe? And why did they bury her with so great honors, in a way they rarely buried women in that society? The media called her the Altai Princess, but judging by ethnographic evidence, a solitary and prominent mound suggests she could have been a shaman or priestess. And this assumption, which stems from archaeological evidence, is confirmed by the results of the tomographic study.

Numerous ethnographic sources say that the birth of a shaman must be preceded by a long illness of that person. This appears to be true for the Ukok woman as her vocation must have been due to a long debilitating illness, which expanded her ability to meditate and compelled her to an ascetic lifestyle. However, she must also have been an outstanding personality, which is why she became the “chosen of the spirits”.

In recent years, we have learned a lot about the mysterious woman from Ukok, but until recently we have not known what she looked like. It was difficult to make an anthropological reconstruction because some parts of her skull bear remnants of soft tissue; moreover, her skull was deformed under the pressure of frozen water, not to mention the damage from postmortem trepanation. 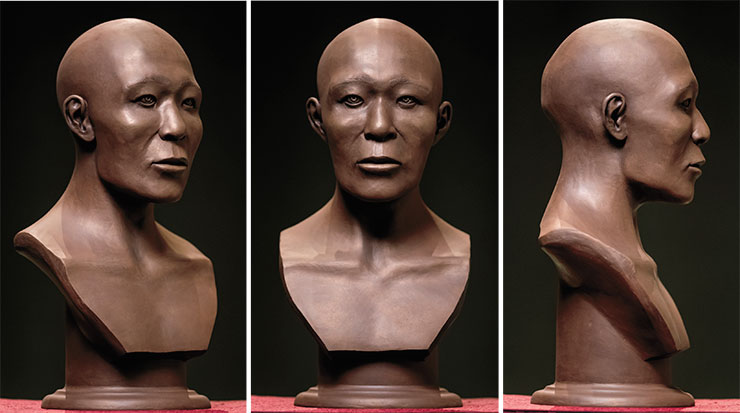 Today, nearly three decades after the discovery of the unique burial, Pavel Chistyakov, a researcher at the Tsifra Digital Laboratory, Institute of Archaeology and Ethnography SB RAS (Novosibirsk) has obtained a 3D scan of the Ukok woman’s skull. Then, using a model of her skull printed using a 3D printer, Dr. Dmitry Pozdnyakov, a historian, created her sculptural portrait. In his work, he was guided by the methodology developed by Gerasimov, the founder of the Russian school of anthropological reconstruction.

Now we can finally see what the legendary young woman of Ukok looked like. Doctor Tatyana Chikisheva, an anthropologist, believes she is a representative of a most ancient Paleo Siberian anthropological type, whose origins, as well as historical fate, remain open. 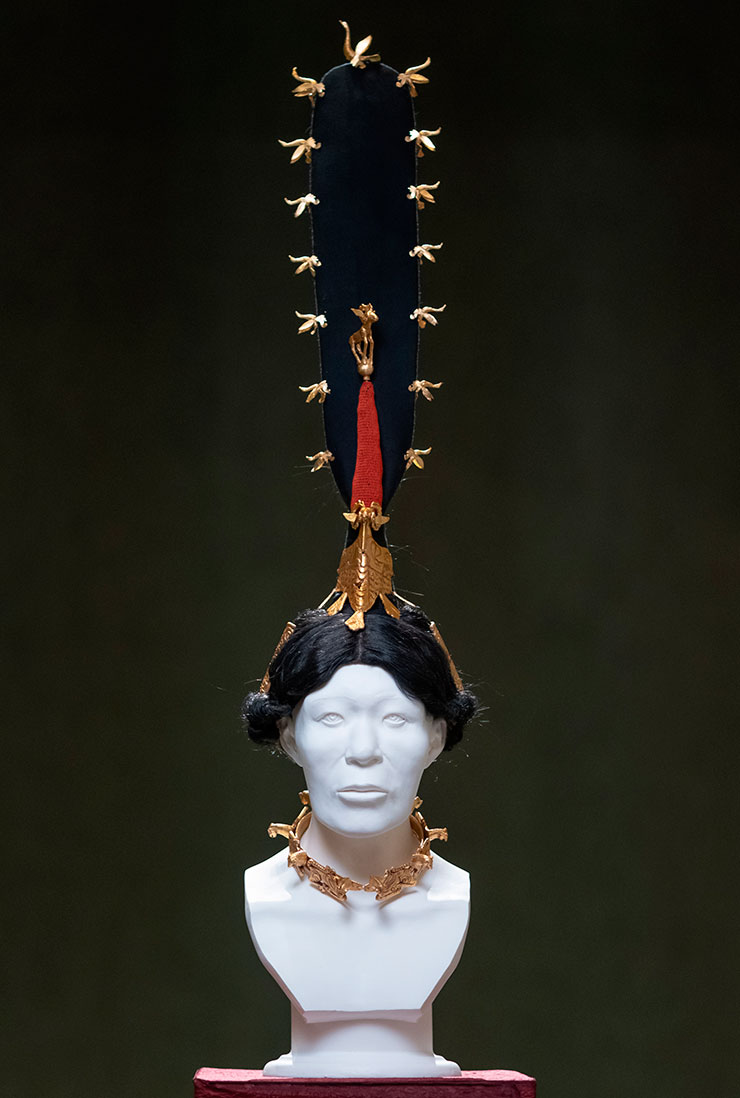 …Recalling her unforgettable days at Ukok, Natalia Polosmak, who discovered the mummy, wrote, “A woman from Altai, a friend of mine and an ethnographer by profession, once said, ‘You would never have found Her unless She had wanted to.’ And I agree with her. But if She wanted to be found, then why? ...She revealed herself to communicate something important to us, and we only need to understand how we can hear that story about Herself as well as Her culture and Her time.”

Read more about discoveries on the Ukok plateau in SCIENCE First Hand:

Polosmak N.V. Life and Death of the Altai Princess: On the Path to Celestial Pastures

Letyagin A.Yu. and Savelov A.A. Life and Death of the Altai Princess [in Russian]

The mummy continues to reveal secrets

Also in the book: