Previous
All news
Next
150

Archaeology
Prof. S. Pääbo (third from left) whose team was the first to decode the complete Neanderthal genome and discover a new human species known as the Denisovan. Altai Mountains, 2018

Paleogenetics Has Conquered the Nobel Olympus

The 2022 Nobel Prize in Physiology or Medicine went to Svante Pääbo (Max Planck Institute for Evolutionary Anthropology, Germany), one of the founding fathers of paleogenetics, whose team was the first to decode the complete Neanderthal genome and discover a new human species known as the Denisovan. The Nobel Prize is a mark of high appreciation and expected recognition of the contribution made by the outstanding Swedish scientist, whose work has already been awarded dozens of prestigious scientific prizes and medals, including the Lomonosov Grand Gold Medal (2014)

Paleogenetics is a relatively young scientific discipline: it is not even half a century old. But in such a short period of time, this science has answered quite a few questions that have been intriguing us for decades – not only professional biologists but everyone interested in the origin and evolution of man.

Svante Pääbo’s path to the top began with his childhood passion for Egyptology, which led him years later, when he became a medical doctor, to studying and analyzing DNA from Egyptian mummies. And next in line were more ambitious projects: the study of the genomes of primitive man. As the Nobel laureate himself wrote, “What started as a secret hobby when I was a graduate student in my native Sweden over thirty years ago had resulted in a project that seemed like science fiction” (Pääbo, 2014).

The young science of paleogenetics took special interest in the Neanderthals – the closest relatives of modern humans – who disappeared from the evolutionary stage 30,000–40,000 years ago. Disputes about the kinship and interactions between the Neanderthals and modern humans continued for decades, and Pääbo’s team first saw an opportunity to resolve them in the mid-1990s, when the researchers had had a decade of experience in deciphering small amounts of DNA from the ancient remains of cave bears, mammoths, and other Late Pleistocene animals (Pääbo, 2014).

They began by working with the DNA contained in mitochondria (cellular organelles responsible for energy production); in the early 2000s, they grew capable of deciphering nuclear DNA, i.e., the complete genome, so over the years, Pääbo and his team managed to improve the techniques for isolating genetic material from ancient bone remains and clearing it from “genetic debris.”

The path was open, and in 2010, the researchers succeeded in recreating the first complete Neanderthal genome. These results, further confirmed by studies carried out by both Pääbo’s team and other teams, became a sensation: it turned out that any modern human with non-African ancestors has genes of Neanderthal origin in their genome.

But this was only the beginning of “rewriting” the history of mankind. At the end of 2009, a genetic analysis of a tiny bone discovered during excavations in the Denisova Cave in the Altai Mountains by scientists from the Novosibirsk Institute of Archaeology and Ethnography, Siberian Branch, Russian Academy of Sciences (IAET SB RAS), revealed compelling evidence of the existence of yet another, previously unknown human species, which separated from our branch about one million years ago, or half a million years before the Neanderthals! 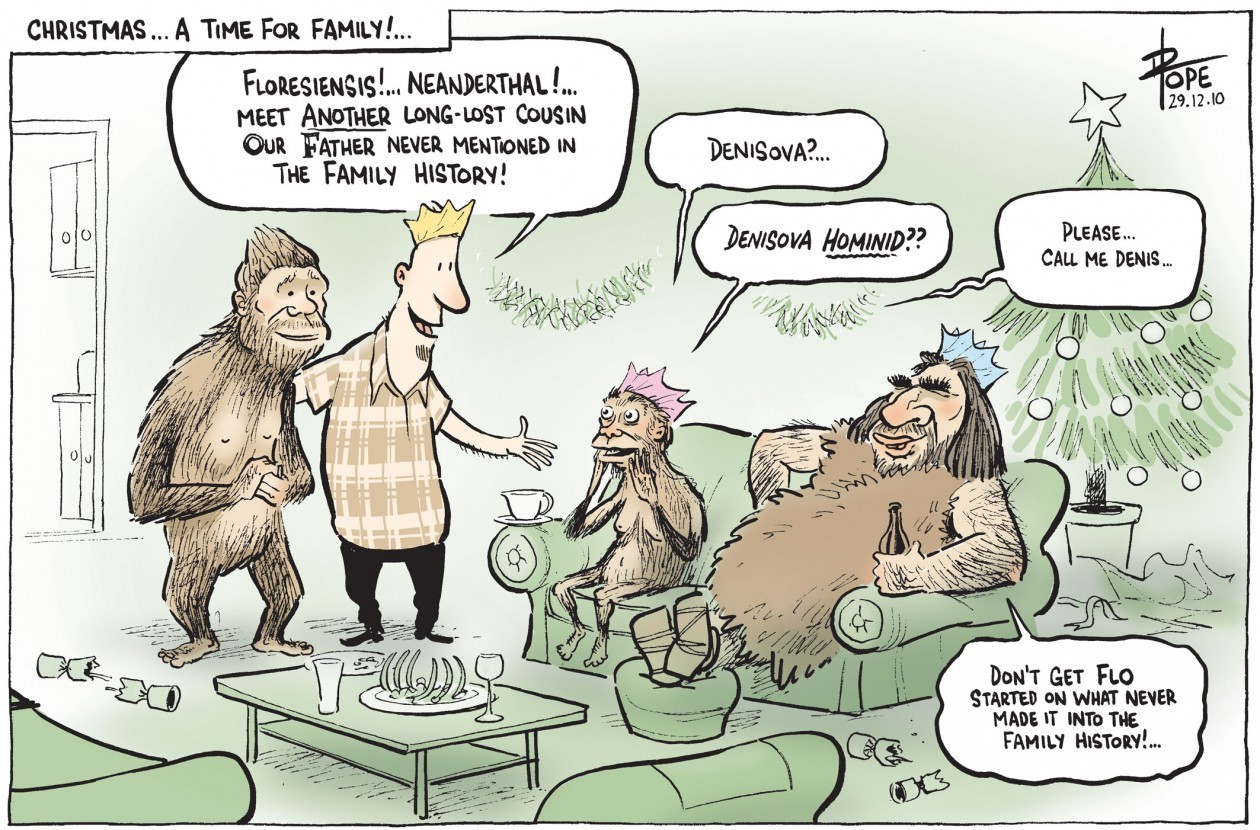 As shown by the subsequent comparative analysis of the genomes, this “big brother” also left its noticeable trace in the genome of modern humans. Thus, the Denisovan passed on to us functionally significant genetic variants that help adapt to living at high elevations, resist low temperatures, provide immunity against infections, etc.

A few years later, a genetic analysis of a bone fragment found in the eastern gallery of the Denisova Cave in 2012 gave the world’s first direct evidence of “mixed marriages” between completely different groups of ancient people: the Neanderthals and the Denisovans.

The discovery of the bone of a mestizo girl, together with the available paleogenetic data, unfixed all the established notions about the evolution of modern man. It turned out that our family tree is not actually a “tree” but a dense “bush” with intertwining branches. About some of these branches we do know a lot, but – judging by the paleogenetics data – other branches exist too, as yet unnamed, and they also contributed to modern mankind.

…Svante Pääbo (2014): “One day, we may then be able to understand what set the replacement crowd apart from their archaic contemporaries, and why, of all the primates, modem humans spread to all comers of the world and reshaped, both intentionally and unintentionally, the environment on a global scale. I am convinced that parts of the answers to this question, perhaps the greatest one in human history, lies hidden in the ancient genomes we have sequenced.”

Read more about the work of Svante Pääbo and his team in SCIENCE First Hand:

In Search of the Lost Genomes (scfh.ru/en/)

Daughter of a Denisovan Father and a Neanderthal Mother, or Modern Humans as Product of Ancient Hybridization (scfh.ru/en/)

The Pleasure of Discovery, or a Hunt for Hominins (scfh.ru/en/)