Twenty-five years ago, the discovery of an ancient Pazyryk paired burial on the Ukok Plateau in the Altai Mountains, home of the famous Altai Princess, gave birth to the hypothesis about the Altai Amazons. Anthropologists were convinced that the burial contained remains of a girl aged 16 to 17, although they always emphasized her “unfeminine” features.

However, when Novosibirsk researchers (Novosibirsk State University, Institute of Cytology and Genetics SB RAS, Institute of Archaeology and Ethnography SB RAS) analyzed the DNA from the bone remains, the warrior girl with a serious set of weapons turned... into a young man with a thin braid and amulets of female fertility—the cowrie shells that were found beside him appear to have served as belt decorations. The new data are a reason for revising the possible kinship between the buried people: previously, this paired burial of an aged man and a young woman was considered as a burial of spouses or that of father and daughter. The details of this study will appear in a coming issue of SCIENCE First Hand

The studies of burial mounds associated with the Pazyryk nomads of the Scythian period (6th to 3rd century B.C.) in the south of Siberia gained international fame thanks to the unique preservation of the remains of humans, animals, and items made of organic materials. The discovery and study of the Pazyryk culture complexes brought the archaeologists Vyacheslav Molodin and Natalia Polosmak (Novosibirsk) the State Prize of Russia in 2004.

“...When the first complexes associated with the Pazyryk culture were discovered in the 1990s,” says Polosmak (Institute of Archaeology and Ethnography (IAE) SB RAS, Novosibirsk), “archaeologists and anthropologists did not have such a powerful research tool as paleogenetic methods. But we should not think that paleogenetics alone can resolve all archaeological mysteries.

“The situations may be highly complex and confusing, which is illustrated by the paired burial at Ak-Alakha 1 burial mound 1, which was excavated in 1990.

“The mound with an unusual burial was the first mound we investigated on Ukok. It was the first non-looted “frozen” burial of this culture, where the ice preserved all the items that usually disintegrate—burial inventory, pieces of the costume, horse harness...

“This mound 18 m in diameter is classified as middle-sized. The buried people had a high social status and were part of the Pazyryk elite. This is evidenced by the burial ritual: two log cabins—external and internal; nine horses buried in a special compartment of the external log cabin; the buried med had been put in woodblocks of almost the same size as those found in the so-called royal Pazyryk tumuli (Rudenko, 1953). Apart from human remains, the two woodblocks contained sets of weapons consisting of iron ax hammers with a wooden handle, iron daggers in a wooden sheath, and goryta (cases) with bows and arrows. The buried men were horseman warriors.” 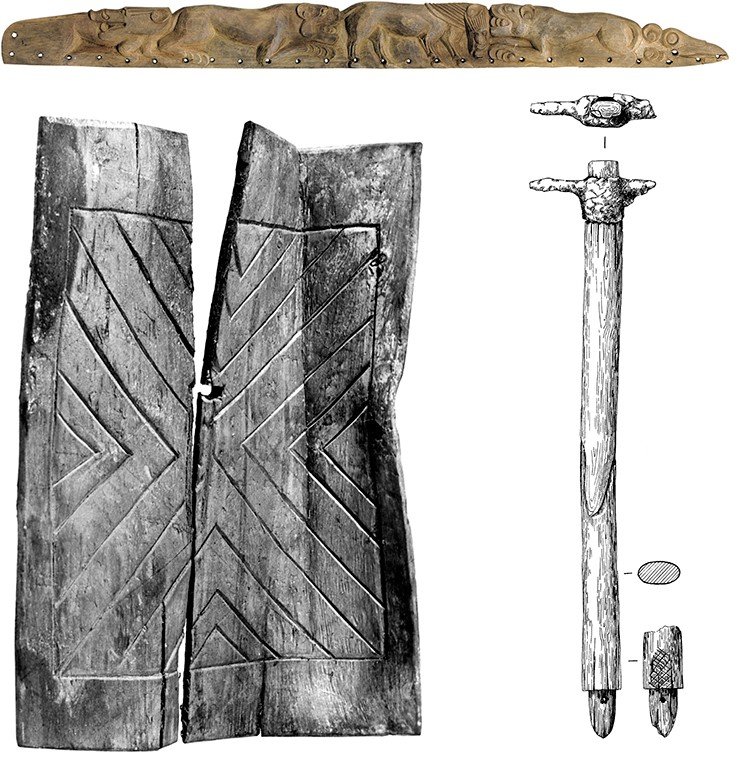 Since the bodies had not been mummified, their gender and age were established from the skeletal remains using physical anthropology methods by experienced professionals—Dr.Sci.(History) Tatyana Chikisheva (IAE SB RAS, Novosibirsk) and Cand.Sci.(History) Tatyana Balueva (Institute of Ethnology and Anthropology RAS, Moscow). The sex of the person buried in the first woodblock, a man aged 45 to 50, raised no doubt, but the individual buried in the second woodblock was a different story... Although anthropologists were convinced that those were remains of a girl aged 16 to 17, they emphasized her “unfeminine” features: “the skull is very large and looks massive... the lower jaw is very massive... The postcranial bones are very long, almost the same in terms of absolute size and massiveness as male skeleton bones... The body length is very large” (Chikisheva, 1994).

The anthropologists' conclusions were confirmed by the features of the accompanying inventory: the woodblock, the wooden cushion, the quiver, etc.—all these things were smaller in size compared to the man's burial. In addition, researchers found near the pelvis of the buried person 34 cowrie shells, which might have been belt decorations. Shells were an extremely rare find in Pazyryk graves. They were usually found in handbags together with beads and seeds of exotic fruits; researchers believed that the shells served as amulets. In addition, these shells were known to have a semantics of a symbol of female fertility.

The buried persons also had different hairstyles: there was long dark brown hair on the man's skull while his forehead and crown were open. On the skull of the second person, there was a little thin braid.

Discovering the burial of this girl—a rider and warrior—became one more argument for the hypothesis that the Pazyryk society may have had a tradition whereby those young girls from the elite who were prone to the art of war could learn, before they got married, to use weapons, although this was a unique case for the Pazyryk culture (Polosmak, 2001). 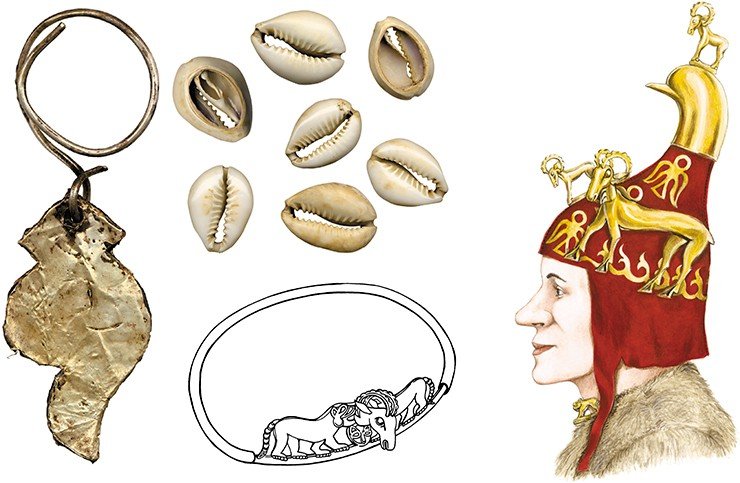 However, 25 years later, to clarify the phylogenetic and phylogeographic characteristics, the possible degree of kinship, and the sex of the buried persons, scientists investigated their remains by paleogenetic methods.

The main method was molecular genetic analysis with four systems of genetic markers (mitochondrial DNA, a polymorphic fragment of the amelogenin gene, STR-loci of autosomes, and STR-loci of the Y-chromosome). The investigations were carried out at the Institute of Cytology and Genetics (ICG) SB RAS, Novosibirsk (Pilipenko, Trapezov, and Polosmak, 2015).

Scientists believe that “it could be due to the young age of the deceased individual: gender identification of remains of adolescents from the skeleton morphology may, in some cases, be very difficult.” However, it follows from what has been said that the genetic analysis of this individual was not that simple. Moreover, the new data are a reason for revising the possible kinship between the buried persons. Previously, researchers believed that this paired burial of an aged man and a young woman was a burial of spouses or father and daughter.

According Cand.Sci.(Bio.) Alexander Pilipenko, a researcher at the ICG SB RAS and a joint research laboratory at Novosibirsk State University, “...reconstructing the degree of kinship of individuals buried in collective graves or burial sites and determining their sex is one of the most promising areas for the application of paleogenetic methods in archeology. By analyzing uniparental inheritance markers (mtDNA and Y-chromosome), we determined the probability of close kinship between the individuals from the paired burial in both the female and male lines. The data on the profiles of autosomal STR-loci show that the investigated individuals were not direct relatives; in this case, taking into account the sex of the buried, they could not have been father and son.”

Having established a sufficiently close kinship between the buried persons (at an uncle-and-nephew level), the geneticists have confirmed the conclusions made in 1994 by Balueva, who created reconstructions of the faces of the two individuals: “From the front, the noses of the man and woman from the Ak-Alakha 1 burial site are very similar... The chins of the male and female skulls are very similar in shape."

Another piece of evidence for the close kinship of the individuals was the similarity of pathological processes in the cervical vertebrae, which was reported by Balueva: “...the man had spondylosis of the cervical vertebrae, which obstructed the head movement; in the female skull in the area of articular condyles of the occipital foramen, there are traces of the same deformation processes that we have mentioned above. The identical signs of illness may indicate a kinship of those buried in the mound.” 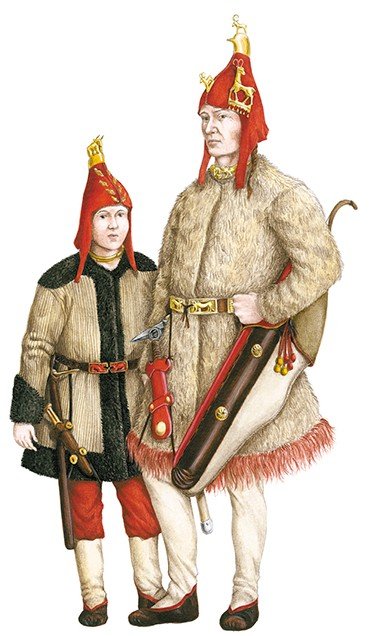 Natalia Polosmak says: “The two men were buried in one grave not only because they were near of kin and had a certain social status but also because both of them had not survived, perhaps each for his own reason, the past winter, and they were buried in the spring, when it was possible. The paired burials of Ukok are more likely to be explained by these factors.”

There is another striking fact: by the time of his death, the older man had long been a sedentary disabled person, unable to get on a horse on his own. According to Chikisheva, his skeleton had signs of severe damage with one of the varieties of chronic polyarthritis: "The general pathological process involves almost the entire osteoarticular apparatus... the disease of the deceased individual can be identified as ankylosing spondylitis, also known as Bekhterev's disease... The etiology of the disease is unknown... The disease affects mostly males and begins in the second or third decade of life.” His death could have been due to the development of the disease. As to the cause of the young man's death, neither anthropologists nor geneticists have been able to find it yet.”

...In science, like in life, myths are born from one set of facts and die under the pressure of other facts. Paleogeneticists have already rewritten the evolution of mankind, and now they are beginning to address other “dark spots,” such as gender identification for samples of skeletal remains and the degree of kinship of those buried in collective graves. However, we should not say that paleogenetics offers an infallible and absolute solution for all the unresolved problems in archaeology. Although today they have closed the romantic story of an Altai warrior girl from Ak-Alakha 1 burial mound 1, there is a new mystery of “life and death,” which scientists have yet to resolve.