Previous
All news
Next
4297

The mummy continues to reveal secrets

Mummies have always enjoyed much attention. Especially those that have become as famous as the mummy of a woman from Ak-Alakha 3, a Pazyryk burial site on the Ukok Plateau, discovered by Russian archaeologists in 1993. No matter how you look at it, it was a discovery of great importance


A fragment of the film “Altaians, tombs, scientists” made by S. Barkhatova is dedicated to one of the most impressive archaeological discoveries of the last century – the “frozen” graves of Gorny Altai. Excavations on the Ukok Plateau performed by an expedition led by Natalia Polosmak (Institute of Archaeology and Ethnography, Siberian Branch, Russian Academy of Sciences) revealed intact tombs of nomadic nobility immured in ice lenses. As the mummies of a man and a woman were buried together with numerous funerary goods, the researchers have managed to restore a full-fledged picture of everyday life, culture and religious beliefs of the population living on this high winter pasture two and a half thousand years ago. Shot by a participant of the expedition Doctor of History V. Mylnikov, Institute of Archaeology and Ethnography, SB RAS, 1993 [in Russian]

For the first time in over a hundred years during which the Pazyryk culture of Gorny Altai has been studied, a “frozen” grave (dated 4th century BC) of a noble Pazyryk woman left unscathed by robbers was discovered. Together with her were buried six horses, and the intersection of her wooden burial chamber became a grave for a man and a teenager. Inside the frozen larch vault, all the objects that had been put into the tomb – felts, wooden and horn dishes with some food leftovers – were found intact. The tightly sealed larch block had preserved the mummy of a woman in full attire: a woolen skirt, a silk blouse, high felt boots and a high wig-headgear. Her arms were covered with tattoo. All the decorations were carved out of cedar and plated with gold foil. This was the first time that the body of a representative of the Pazyryk culture has been found intact. Not surprisingly, from the very first days she captured the attention of researchers. 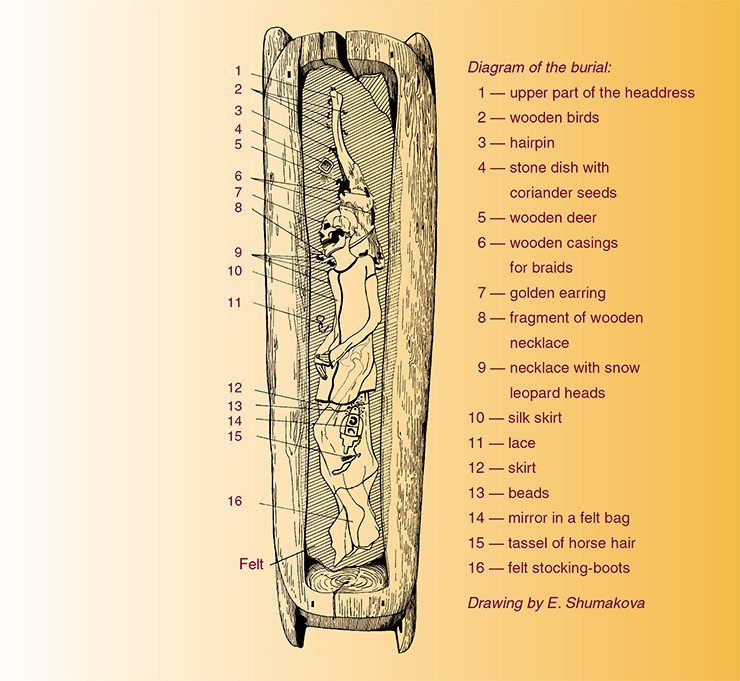 In order to preserve the mummy, it was re-embalmed in 1993—1994 in VILAR by Prof. V. L. Kozeltsev. After the re-embalmment, it was kept at the Institute of Archaeology and Ethnography, SB RAS, until in 2012 it was moved to the Anokhin National Museum in Gorgo-Altaisk, where it is now exhibited as an object of worship.

The magnetic resonance tomography of the mummy of the young woman was made in 2010 in the International Tomography Center, SB RAS (Novosibirsk) at the Achieva Nova MRT (Philips, 1.5 Tesla)

Our journal (# 3/4 (57/58), 2014) published the article The Life and Death of the Altai Princess, which provided high field MRI data results of the mummy and evidence of severe cancer and a serious injury – dislocation of the right hip and damage of the right shoulder joint (https://scfh.ru/en/news/the-life-and-death-of-the-altai-princess/).

During the ongoing investigations, some paleoradiological and paleopathological findings were made in the tissues of the locomotor apparatus of the female mummy.

There were signs of osteomyelitis femurs resulting from a severe infection; on the other hand, there were strong indications of an autoimmune inflammatory process - spondylitis (pronounced narrowing of both sacroiliac joints, zones of inflammatory edema of the bone tissue in the projection of the left sacroiliac joint, the joints of the foot, and involvement of periarticular soft tissues - Achilles bursitis), which also must have been caused by exposure to infection. Signs of an early "aging" of the spinal joints and damage to the ligaments of the knee show the action of unfavorable factors of traumatic origin. The new data have greatly expanded our knowledge of the living conditions of the Pazyryks – founders of one of the most beautiful and mysterious cultures of antiquity. 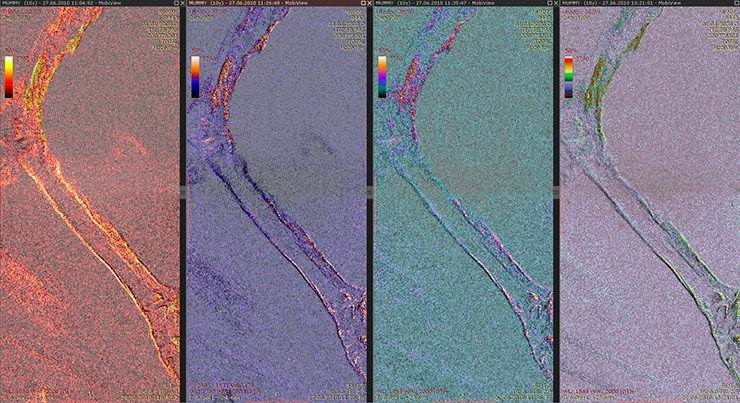 The severe climate of Altay highlands and the way of life of Pazyryks breeders were responsible for the fast physical wearing of that young woman and her tribesmen. What made the situation even harder was that Gorny Altai, as far as we can see, was not homeland to the Pazyryks, who were newcomers not adapted to their environment.

Although this burial was discovered in 1993 and almost a quarter-century has passed since the Pazyryk woman came into life for the second time, the study of the amazing mummy goes on and the story of her life is to be continued.

Visual analysis of the tomograms and post-processing (3D, MPR, contrast enhancement) performed with the use of open source software for the analysis of DICOM-images: Radiant Dicom Viewer 3.9.15.14253beta (64-bit).

For more details about the excavations on the Ukok Plateau see the book The Riders of Ukok by N.V. Polosmak