Human Being as a Habitat

The “Science” magazine included the research into communities of intestinal microorganisms (microbiomes) into the list of runners-up for Breakthrough of the Year 2011, thereby continuing the trend set by this journal in the previous year. The fact that the studies of the human microbiome are among the ten most significant advances of the first decade of the 21st century demonstrates their paramount importance

If we regard a human being as a set of individual cells, we should remeber that in addition to approximately 50 trillion of our own cells, each of us hosts 450 trillion “foreign” cells. These are the bacteria for which our body is no more than an environment. These indispensable and indiscernible companions of a human being live mainly in the human intestines. Moreover, not only do they live there but also work for the good of humans, assisting in the digestion of complex carbohydrates, supplying a considerable part of the vitamins, which our organism is unable to synthesize, and stimulating the immune system, whose major part is confined to the lymphoid tissues in the intestinal wall.

Usually, we acquire our microbiota during the very first moments of life, when passing through the birth canal, and with mother’s milk. The necessity of bacterial tenants is demonstrated by the fact that germ-free, or gnotobiotic animals, born through Caesarean section and artificially fed under sterile conditions, suffer from many diseases and even have to eat more that normal animals in order to maintain their weight.

However, it is not an easy task to study our live-in companions. Indeed, to find out who is living inside us, it is necessary to extract them out of the body and grow them in an artificial medium; however, not all of these microorganisms are culturable even in the most “gourmet” media. The estimated fraction of unculturable microorganisms in various habitats (not only in our intestines, but also in soil, plant leaves, seawater, and so on) is up to 90 %! 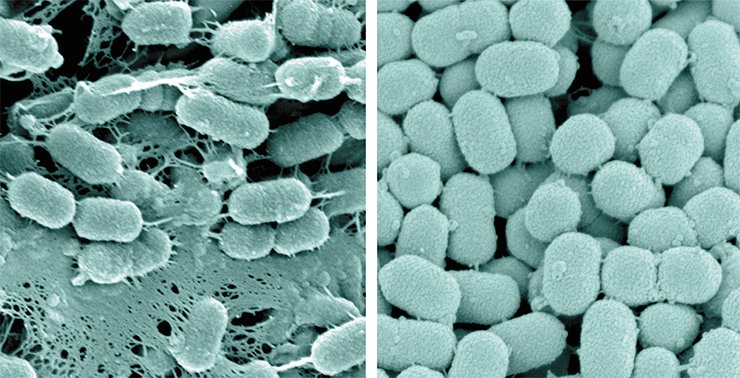 A helping hand was lent by state-of-the-art genomics methods, which have given rise to a new field in biology, metagenomics. Of key importance has been the development of massively parallel DNA sequencing methods, due to which millions of short DNA fragments can be read simultaneously and used to assemble complete genomes or their sufficiently long regions. In principle, today it is possible to isolate total DNA out of any natural specimen and to characterize the composition of the organisms living in it, both viruses and bacteria.

Application of metagenomics to the human being as a microbial habitat has already given interesting results. In particular, it has been discovered that the biota of almost any human being can be classified as one of three major types according to the prevalent bacteria. These enterotypes differ in relative efficiency of food processing, synthesis of vitamins, and in other characteristics. It is interesting that although the enterotype depends on the diet – for example, the genus Bacteroides is characteristic of meat-eaters, while Prevotella, of vegetarians – the enterotype does not change when the diet is temporarily altered. Can it be that it is our “tenants” who determine our tastes?

Physicians are already adopting a new type of transplantation. It appears that in case of several inflammatory intestinal diseases, a patient can be helped by a transfer of feces from a healthy person. It does not sound appetizing but shows a lot of promise. There have been reports that such a procedure is helpful in multiple sclerosis, a neurodegenerative disease caused by the immune system disturbance.

Research into the human microbiome is at its very beginning. There is no doubt that the 450 trillion cells residing in our body but lacking any genetic kinship to us can hide many surprising secrets.

The high evaluation of the research into human microbiome by the Science magazine reflects evolution in the attitude of educated humankind to the microorganisms inhabiting the human body. This started as an unreserved struggle in the early 19th century, whereas now informed control over bacterial and viral community is regarded as a new promising approach to disease prevention and treatment.
We cannot but emphasize here that the significance of intestinal microbiota for human health was established by our famous compatriot, Nobel Prize winner, Prof. Ilya I. Mechnikov. As for the reduction of the overall diversity of intestinal microbiomes to three enterotypes (Arumugam et al., 2011; Wu et al., 2011), which was mentioned by Science, it is an important step towards practical application of modern genomics methods, which will undoubtedly be in demand in various fields of therapeutic and, particularly, preventive medicine.
The revision of our views on the coexistence of humans and microbes (bacteria and viruses) has been caused by the expansion of the morphophysiological “authority” of the inflammatory response, which, as a mechanism of immune protection, influences numerous body functions and is involved in developing various diseases such as atherosclerosis, obesity, and Alzheimer’s disease.
Now we can argue that the whole body of knowledge about the interactions between microorganisms and their hosts, including humans, leads to quite an evident conclusion, although not recognized by everyone, that microbiological environment is an ordinary environmental factor, just like temperature, oxygen content, etc. The immune system, our “sixth sense” as the American physiologist J. Edwin Blalock famously quipped, plays a key role in interacting with this most diverse and dynamic factor.
Since our immunocompetent cells constantly interact with bacteria and viruses, their response to bacterial and viral stimuli influences the overall body metabolism, as well as the mechanisms underlying neuroendocrine regulation, and eventually it affects our state of mind and behavior.
© M. P. Moshkin, 2012