Researchers from the Institute of Chemical Biology and Fundamental Medicine, Siberian Branch, Russian Academy of Sciences (ICBFM SB RAS; Novosibirsk, Russia) have discovered a new class of nucleic acid analogues that have a potential for developing into efficient gene-targeting therapeutics

‘Ex Siberia semper novi’ is how Ivan Efremov, an outstanding Russian writer, scientist and thinker of the Soviet epoch, reworded in his novel The Razor’s Edge the almost forgotten phrase of Pliny the Elder, an ancient Roman naturalist, ‘ex Africa semper aliquid novi’ ([There’s] always something new [coming] out of Africa). Perhaps, for the citizens of Ancient Rome, Africa was a bit like Siberia for modern Europeans—a faraway and mysterious land and an interminable source of wonders.

Today, Efremov’s phrase acquires a special meaning. Siberia is not only a storehouse rich in natural resources: oil, gas, gold, and diamonds. The greatest treasure of Siberia is people, who drill oil and gas, wash gold, dig for diamonds, and build bridges, electric power plants, and motorways. Standing in the first rank of those who create the manmade world are people of science, pathfinders by trade.

One of the most important areas in building our knowledge of the world is life sciences—biology and medicine. There scientists will never get short of work because people remain vulnerable to a great many diseases. Moreover, humankind is still vulnerable on a global scale as the recent outbreak of Ebola in Africa has mercilessly reminded us.

We can say for sure that in the area of biomedicine Siberian scientists are far from being the last on the list. This is how it was in the former USSR and this is how it still is. Back in 1967, when Nina Grineva, a researcher from the Laboratory of Nucleic Acid Chemistry, Novosibirsk Institute of Organic Chemistry, Siberian Branch, USSR Academy of Sciences (the laboratory later sprouted out into the current ICBFM SB RAS), led by Academician Dmitry Knorre, put forth a new concept for treating diseases by using derivatives of nucleic acids.

Today, the legacy of Grineva and Knorre has enabled their modern successors to get their bit of luck. Recently, Novosibirsk chemists have synthesized a new class of nucleic acid analogues, namely, phosphoryl guanidines (Kupryushkin, Pyshnyi, and Stetsenko, 2014).

When an unloaded rifle fires a shot

What is similar and what is different between common nucleic acids and phosphoryl guanidines? A natural DNA or RNA molecule contains negatively charged phosphate groups (>PO2–), which connect adjacent nucleotides into a polynucleotide chain. As for the DNA analogues that have been obtained for the first time at the ICBFM SB RAS, those substitute uncharged phosphoryl guanidine groups for phosphate groups. Low molecular weight compounds of such a structure are present in Nature, their synthetic equivalents were synthesized for the first time also by Russian chemists as early as in the 1960s (Alimov and Levkova, 1964). However, no macromolecules with phosphoryl guanidine groups, in particular, no DNA or RNA derivatives, have been obtained until now and their properties remained unknown.

Why would one need to replace negatively charged phosphates in DNA with uncharged groups? Let us have a look at natural oligonucleotides, which are relatively short pieces of nucleic acids, whose derivatives Novosibirsk researchers proposed as gene-targeting medicines half a century ago.

Oligonucleotides are relatively short fragments of nucleic acids, which are able to recognize complementary DNA or RNA sequences and form double helices with those sequences. This ability allows oligonucleotides to affect gene expression by arresting translaion of genetic information in a controlled manner

Firstly, it is well known that once a common oligonucleotide enters the body, it is rapidly digested by enzymes, which break them down into nucleotides in a matter of a few minutes. Thus, any oligonucleotide therapeutics must be sufficiently resistant to enzymatic attack. Secondly, to enter a living cell, oligonucleotides have to cross the barrier created by the cell membrane, which is mainly built of lipids. Here a negative charge of nucleic acids would be a disadvantage because uncharged chemical compounds are more likely to interact favorably with nonpolar lipid molecules that form the cell membrane.

Since the new phosphoryl guanidine analogues of nucleic acids do not carry a negative charge, it is reasonable to expect that they may pass through the membrane into the cell more easily. As for their resistance to enzymes, new oligomers are doing much better than the natural oligonucleotides.

It is known that nucleic acids are cleaved in the body by enzymes called nucleases. The new nucleic acid analogues were first tested for their resistance to snake venom phosphodiesterase, one of the most active nucleases. It has been found that a single phosphoryl guanidine group introduced into an oligonucleotide is sufficient to arrest its cleavage by that enzyme for over one hour as compared to the natural oligonucleotide, which is cleaved in less than five minutes. Later, evidence emerged that those oligonucleotides in which all the phosphate groups are completely replaced with phosphoryl guanidine groups stay intact in the presence of serum for at least three days.

Finally, despite their electrically neutral character, phosphoryl guanidines are sufficiently water-soluble, which is also quite important for prospective drugs.

The future is with NONA

However, the most amazing property of phosphoryl guanidines was revealed when the answer was found to probably the most important question of all, namely, the ability of these new oligonucleotides to bind to the target regions in nucleic acids.

It is known that cellular DNA, which is responsible for the transmission of hereditary traits of a living organism, exists as two closely associated strands forming the famous double helix. Here, each elementary bit of one DNA strand, a nucleotide, binds only to its nucleotide partner to form a complementary base pair (for the four nucleotides A, C, G, and T forming a DNA molecule, the correct complementary pairs are only the A:T and G:C).

The complementary binding is based on hydrogen bonds between the hydrogen, nitrogen, and oxygen atoms in heterocyclic bases, which are present in nucleotides. In this sense, a complementary complex between an oligonucleotide and a region of the target nucleic acid is a scaled down model of the DNA double helix. 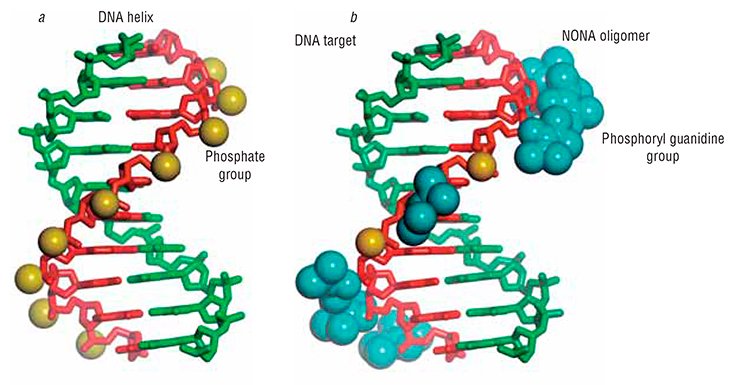 As it was mentioned above, to be active in a living body, oligonucleotides need protection against the enzymes. For this purpose, the natural structure of oligonucleotides is modified with various chemical groups, which slow down enzymatic cleavage.

An example of such chemical modification is the replacement of one of the oxygen atoms in a phosphate group with a sulfur atom, which gives a phosphorothioate. Phosphorothioate oligonucleotides are much more resistant to nucleases than natural oligonucleotides. However, such sulfur derivatives display less propensity for the formation of complementary complexes with target nucleic acids. In other words, the double helices they form with DNA or RNA are less stable as compared with natural DNA or RNA double helices comprising the same number of nucleotides. Chemists ascribe this to a larger radius of the sulfur atom as compared with the oxygen atom.

Another useful property of phosphoryl guanidines is that only one oxygen atom within the phosphate group is replaced with a guanidine group, the remaining part of the nucleotide molecule remains completely intact and, in turn, may be subject to an independent chemical modification.

Nona is not only a feminine name, which is pretty rare in this country. In ancient Roman mythology, Nona is one of three sisters Parcae, the female goddesses of destiny. Romans believed that not only people, but also gods bow to the  power of Parcae. The older sister, Nona, spun the thread of life; Decima measured a span of life a mortal would live, and the youngest sister, Morta, cut this thread with scissors at the moment predetermined by fate. Applying this to the new oligonucleotides as a basis for promising drugs, the name NONA looks especially symbolic when recalling that the nearest analogue for the thread of life is a thread-like DNA molecule.
Of interest is another “use” of the name NONA: this is an abbreviation for “new ordnance of ground artillery,”a universal artillery system combining the functions of a gun, a howitzer, and a mortar. This is again quite symbolic given that those compounds may become effectively targeted drugs in our unremitting struggle with maladies, is it not?


This offers great opportunities for the design of modified oligonucleotide derivatives with useful properties. In particular, it is possible to combine within one oligonucleotide both charged regions carrying phosphate or thiophosphate groups and uncharged regions with phosphoryl guanidine groups of desired length. This has allowed Novosibirsk chemists to propose a new concept for constructing oligonucleotides nicknamed NONA (stands for ‘non-uniformly charged nucleic acids’).

As mentioned above, a partial or complete neutralization of the negative charge may be useful, in particular, for designing oligonucleotide derivatives that would get a free ticket to go insidecells. Thus, NONA oligomers would make a useful expansion of the toolkit of scientific methods for obtaining tailor-made nucleic acids for new generation drugs or diagnostic means.

Still, we are now at the very beginning of the road to future drugs made from oligonucleotides with phosphoryl guanidine groups. Their discoverers hope that these new compounds will be able to help combat a large number of diseases afflicting the humankind.

Indeed, so far only the very first representatives of a vast class of phosphoryl guanidine nucleic acids have been produced. However, studies of their biological activity, in particular, their antibacterial and antiviral properties, go on at full speed. We would like to wish all researchers of the ICBFM SB RAS that are involved in this research to further uphold a good tradition: Siberia always brings us something new!

This work was supported by the Government of the Russian Federation under the program for research guided by world leading scientists (project no. 14.V25.31.0028)