Viruses Are the Agents of Enteric Infections

Novosibirsk researchers from the Institute of Chemical Biology and Fundamental Medicine, Siberian Branch, Russian Academy of Sciences, have designed a high-sensitive multiplex test system that allows for a concurrent detection of various obscure and rare viruses causing enteric infections

The symptoms of an acute enteric infection are well-known to everybody – nausea, vomiting, and diarrhea... Sometimes, the illness is accompanied by a fever, running nose, and sore throat.

This illness takes the most severe course in young children, who quickly develop dehydration and life-threatening states. According to the World Health Organization, about 700 million children under 5 years of age get enteric infections annually, and the mortality associated with gastroenteritides reaches 5—7 million per year.

Accurate and timely diagnosing of the pathogen is of paramount importance, since it determines adequate therapy. It that bacteria and protozoans have been long considered to be the main infectious agents; infection was believed to be transmitted via consumption of contaminated water and food. According to a popular belief, enteric infections are deseases of developing countries; the problem can readily be solved by a strict sanitary and epidemiological control. However, despite constant improvement of water and food quality, economically developed countries currently encounter an acute problem of enteric infections. In particular, enteric infections in Russia, EU countries, and the USA occur less frequently only compared with respiratory infections. 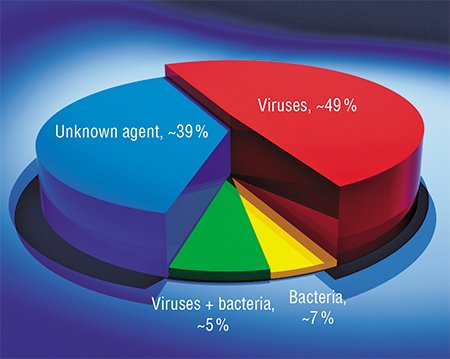 Researchers from the Institute of Chemical Biology and Fundamental Medicine SB RAS have examined the causes of diseases in the young children hospitalized for an acute enteric disease in Novosibirsk, Russia. Despite a widespread belief in half the cases, it was viruses, mainly group A rotaviruses, that caused these acute enteroidea. This accounts for the fact that the majority of hospitalized enteroidea cases take place in winter rather than in summer: rotavirus infections are more frequent during the cold season of the year.

The so-called acute enteric diseases of mixed etiologies have been recorded in a small part of infected children, that is, these children were concurrently infected with pathogenic viruses and pathogenic bacteria. Only 7 % of all children, while the cause of over one-third of all acute gastroenteritides that young children in Novosibirsk had remained unknown a “pure” bacterial infection.

Note that according to the Rospotrebnadzor (Russian Federal Service for Consumers’ Rights Protection and Human Well-being Surveillance), the total rate of acute enteric infections and food toxicoinfections of an unknown etiology in young children in Russia can reach 65—70 %. Indeed, some noninfectious factors, such as improper feeding, can also contribute to these figures. However, scientists believe that rare, obscure, or yet undiscovered viruses are the infectious agents responsible for a large number of such cases. This hypothesis is confirmed by the fact that the list of viral pathogens is constantly increasing owing the viruses that earlier have never been associated with gastroenteritides. For example, it was only quite recently that the involvement of bocaviruses into enteric infections was demonstrated. However, the part of these poorly studied viruses play in increasing the total enteric infection rate, as well as molecular genetic diversity of such viruses, is almost beyond the focus of research in this country. 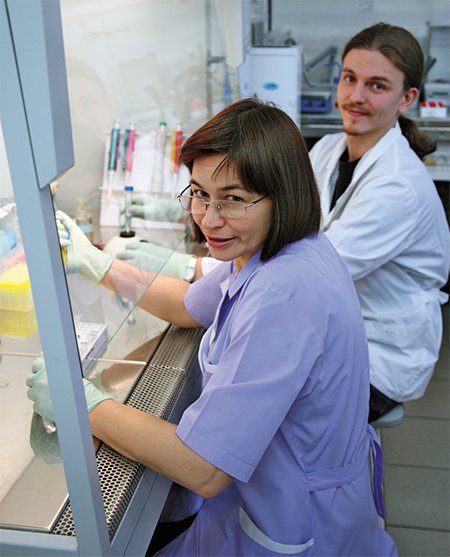 As for diagnostics, today in Russia diagnostic systems have been developed and manufactured only for the most frequently occurring viruses–rotaviruses A, genotype 2 noroviruses, astroviruses, and adenoviruses F. That is why researchers from the Institute of Chemical Biology and Fundamental Medicine took on designing a multiplex PCR-based test system for detectioning several rare viruses (rotavirus C, bocaviruses, coronaviruses, reoviruses, and some others) that can cause enteric infections in children.

Note that traditional diagnostics of enteric pathogens involves bacteriological and serological methods. The former approach, which requires cultivation of biological material on a nutrient medium and subsequent visual assessment of the growth of bacterial colonies, is inapplicable to diagnosing viral infections. The latter, serological, method is based on the responses of the patient’s immune system, i. e., first and foremost, on the production of specific antibodies to a pathogen. This makes it possible to diagnose both bacterial and viral infections; however, the sensitivity of such an approach is not always sufficient. That is why diagnosing based on polymerase chain reaction (PCR) is now ever more frequently applied.

PCR is a rapid and sensitive molecular biological method that can amplify any fragment of nuclein acid (DNA or RNA), which is the carrier of genetic information of a corresponding organism. Thus, examining a patient’s clinical sample, it is possible to to see whether the virus of interest is present and to estimate approximately its number with the known nucleotide sequence.

The term “multiplex system” means that it is possible to diagnose simultaneously several pathogens in one tube. This is important because assaying each clinical sample for the presence of each pathogen individually is labor-consuming and expensive. Indeed, the multiplex format made it more difficult to design a test system since it was necessary to create the conditions when the probes, artificially synthesized nucleotide sequences specifically binding to viral nucleic acids, would not interfere with each other.

Nonetheless, a multiplex test system able to detect a number of rare viral agents that cause acute enteric infections has been elaborated and is now successfully used as a research tool. We may hope that in the nearest future this diagnostic tool will become available for practical health care.